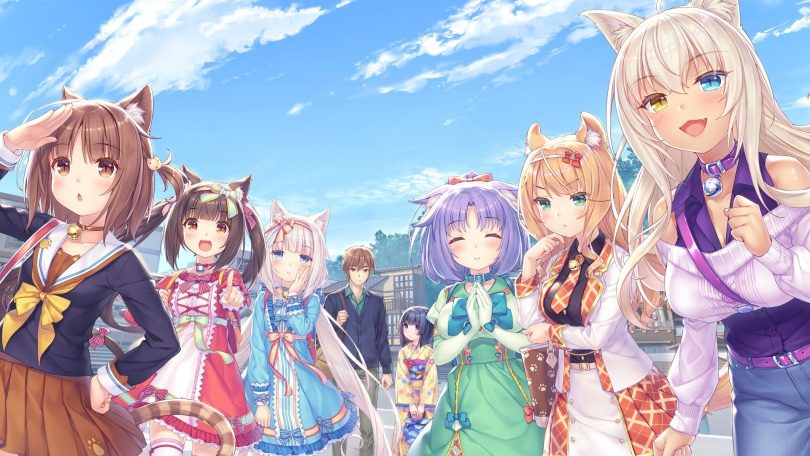 This week’s image is from Nekopara 4, which released this week. Catgirls ahoy!

「Man, it sure has been a week. I must strongly recommend for people not to defy their heartburn-prone constitution hard enough by drinking and eating the wrong stuff to meme up panic attacks from the symptoms, but I guess I’m doing better now.

This week in VNs has been less eventful; the only real big news is Nekopara 4’s release and NekoNyan getting dropped by their payment processor. Worry not though, I’ll provide a digression on translation errors at the end.

Nekopara 4 has a different writer than 1-3, which appears to have made a difference. You guys will have to decide if it’s good or not — I didn’t finish the first game. Next game Shigure, doe? We can hope.

NekoNyan losing their payment processor comes out of the blue, but perhaps we should have expected it given that MG (and others?) have suffered the same fate before. The consequences can be read in their blog post about it, which leans toward making all releases use the Steam all-ages version, requiring a patch on a different site to get any cut content restored (rip Dorg). Apart from that, the obvious thing is that their store isn’t working. On a positive note, they can use PayPal if they make it all noporn, I guess? Fuck payment processors.

From what I understand Slow Damage was initially supposed to be simulreleased, but a delay really is just for the better. It keeps the translator from having to work too fast, which lets them both work better and feel better — overwork is no joke.

Alright, so something on translation errors. I think there’s a point in the life of a translator when they realize that whatever they try, realistically everything they work on is going to have translation errors. They usually won’t be that important — if they were, you would have noticed them messing up the narrative — but as I have found, generally meaning-accurate translations work better in the text even when the inaccurate version seemed “fine”. I have been in the incredibly privileged position of fan translating Shinimasu, and was able to give it a second pass and fix quite a few errors (like ~20 in a 2265 line script? yeesh.)

Despite all that work, TomeKing — a charming gentleman I know who probably has lower Japanese skills than me, though he’s not bad — was able to find 10 errors in a TLC pass I asked for, some of them being real problems! It just never ends. Of course, I had the disadvantage of familiarity when revising my three-year-old translation of the first few lines, but it’s hard to escape the dread of knowing you can and will fuck up. There’s probably still an error in there. It probably doesn’t matter. But it bothers me, it really does.

I’ve heard several translators say the same thing. I’ve seen the strange, sort-of-obvious when pointed out errors that practically anyone could make thanks to misreading or a brain fart or… anything. In the end, all you can do is try to be good, and get a friend to help you if you can afford it.

I suppose this is all a bit academic if you’re reading translations. It probably won’t matter that much — any translator/editor/qa combination worth their salt (and given enough of said salt for it to be reasonable…) will be able to spot any glaring inconsistencies you could actually notice while reading. If they don’t, you have bigger issues than translation errors, which admittedly is common but ANYWAY. What I’m saying is, like, you probably don’t have to worry about the microerrors — just keep in mind, you never know what strange little detail might in fact be a mistranslation.」