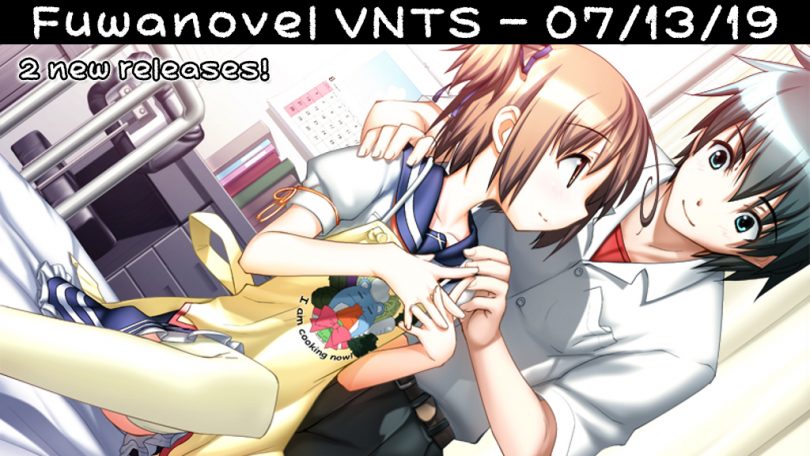 This week’s header image comes from Yotsunoha, one of the many games announced at Anime Expo this year!

VNTS (Visual Novel Translation Status Updates Series) is published each weekend and brings the latest updates from VN translation projects — both licensed and by fans — from around the net. If you find any errors, or you think a project is missing from this list, please let us know in the comments below.

From The Team:  Two in a row means we can say we’re actually back for real, right? It’s been a slow week, but that’s how it usually is after AX. I’m grateful. Makes it easier to turn VNTS back into a habit. Anyway, enjoy the updates!

Decay’s Musings Just a quick message about the Pure Pure translation and the note we added about it. Any long-time regulars probably recognize that one thing we don’t generally do here is gatekeep quality. We want our readers to make their own decisions as to what’s acceptable for them quality-wise and what isn’t. However, we also feel that hyping people up for translations we know or strongly suspect to be of very poor quality is wrong. Sometimes we act on this belief by removing translations from the list outright. We will do this for known machine translations and we don’t cover releases from SakuraGame, for two examples. And, every once in a rare while, we’ll come across a translation we see as an edge case and will issue out a warning instead. This is what I opted to do with Pure Pure. I didn’t want to delete it from the list, but I also didn’t feel right getting people excited about the project without also explaining its circumstances.

You can see the Facebook post that prompted my decision here, and you can see their reaction to the note I left here. I don’t want to get into a mudslinging fight with AbyssTLs as I do respect the effort they’ve put into the project. I know that translating a VN isn’t easy, trust me. Passionate fans like them keep the community alive and vibrant. When I read their post about recruiting editors/TLCs, though, what stuck out to me was not necessarily their engrish line, which I’m sure was intended as a self-effacing joke, but the general quality of all of their posts which are full of glaring grammatical mistakes, as well as the admittance that they’re on the N4 level of Japanese study (which is typically attainable with just a few months of studying). These don’t exactly constitute a death knell for the project, or else I would’ve removed it from the list, but I did think it was a point worth mentioning. I apologize to AbyssTL if the way I phrased the note was overly harsh last week. I’ve rephrased it this week. I will not, however, remove the note entirely.

Anyway, that’s enough semi-drama. Have a good week, everyone. 🙂

Zakabox™ 「I wonder if JAST will do the cool thing and make it easy to patch back in the voices for Majikoi. It sort of depends on how the engine works, I guess. Also, damn, I guess Yotsunoha is releasing now. I only know it for a truly kami screenshot that translates as something like “I’m not a lolicon. The girl I fell in love with just happens to be a loli.”

…Wait, I put my box after Decay’s musings for a reason. Right, drama.

When can you start fan translating? I’m sure that question has presented itself to more than one person learning Japanese. The urge to translate and share what you love is real. It would also be disingenuous for me to claim that I started when I was already good at the language – I don’t think I would’ve passed N3 reading comprehension at the time I did my first translation work, and that’s not a super high bar.

I do think I did my best to limit the damage – I started out in ero doujinshi, where the quality bar is so low you’d have to be hella bad to lower it. I also worked on an obscure 300 line VN (The world ends tomorrow) as well as ~1/10 of a nukige that will never, ever get licensed (Maki Fes!). This is one part where I think the Pure Pure translator, and most fan translators, are mistaken – they take on long projects, which gives them less time to improve their Japanese by reading, and lowers the chances of anyone taking the time to check and edit their translation due to the time needed. If you translate something short, even your usual lazy ass Zaka (or in my case, a certain very slav friend) might take the time out of their day to correct it. I suppose a lot of people don’t really have the interest in short doujin works that I do, though, and it’s just not what they want to translate. But I really still have to recommend it. Start small. You don’t have to do a 300 line game, but what about 3000? Give yourself plenty of time to get it right, too. A 20,000 line game will never get done if you don’t sacrifice some quality for speed, I get that, but pick something small and you have the time.

The Pure Pure translator does seem to be trying to get TLC and editing on the scripts, which is good. But there’s always a problem inherent in this kind of thing: if you’re not good enough to do the work yourself, it’s hard to judge the competence of those who say they’ll help you. This is especially troubling when it comes to looking for editors in my experience; most people who offer to help you will not be very good at all. Some editors have an almost supernatural ability to unfuck engrish, find translation errors just from spotting contradictions (as the translator you should be trying to do this too, but still…), and make the game sound a million times more natural. The worst editors are glorified proofreaders and will catch the easier half of your typos, a few grammar mistakes, and call it a day. (Okay, the worst editors may actively make your text read worse, but I swear those have an uncanny ability to only manifest in professional translations.)

I also want to push back a bit on the game being ‘easy’ and thus not needing great Japanese comprehension. Even supposedly easy games have spots that can very easily lead to mistranslations if you’re not either knowledgeable or very careful. As an example, take the Japanese phrase とてもじゃないが. This one’s thankfully in edict, so if you look it up you’re not likely to get it wrong, but let’s say we think we understand this one from looking at the parts and just translate based on that. Now とても is something like “completely”, じゃない is “not”, and here が is probably “but”. So we get something like “Though not completely…” – but this is actually completely inaccurate. とてもじゃないが means something closer to “Not at all” or “no way”, and is both stronger and more polite than just とても “completely”. The current VN I’m translating, Shinimasu, has a character use this several times. It is not a hard VN to read; I recommend it to beginners.

This is without getting into the loss of detail from not capturing speech quirks, subtle characterization, and nuance in the Japanese. Even the simplest games are likely to have this. The older sister in The world ends tomorrow speaks in a brasher, more direct way than her more passive younger sister, which fits both their characters. If this information isn’t taken into account by someone along the line when making the translation, it’s very likely that this bit of characterization would be lost. In Shinimasu, the main character speaks a bit rudely, the teenage girl talks like a teenage girl, the other teenage girl has a tinge of alpha bitch and keeps being rude in a more circumspect way, and the kind and pure older ex-girlfriend talks in a bit of a cutesy way. This is part of how you make characters feel real, and I’ve tried to capture it in my translation (I hope I’ve succeeded…). It’s just not that easy to write fiction. And if the thing you’re working on isn’t a bland borefest, then it probably has all of these details – it wouldn’t be so good otherwise.

It should be noted here that more than one fan translation many, many people have read were produced by people who were clearly not able to do good work on them. The Daitoshokan translation likely has thousands of translation errors in total, and I think it’s probably fairly typical. Maybe even better than average when it comes to the editing job, despite that too being lacking in places. People will probably enjoy your translation as long as it reads better than what Google-sensei can provide. But I really do think you should feel a bit sad if you end up producing a translation that is significantly inferior to the original work. I hope I won’t, now or in the future.