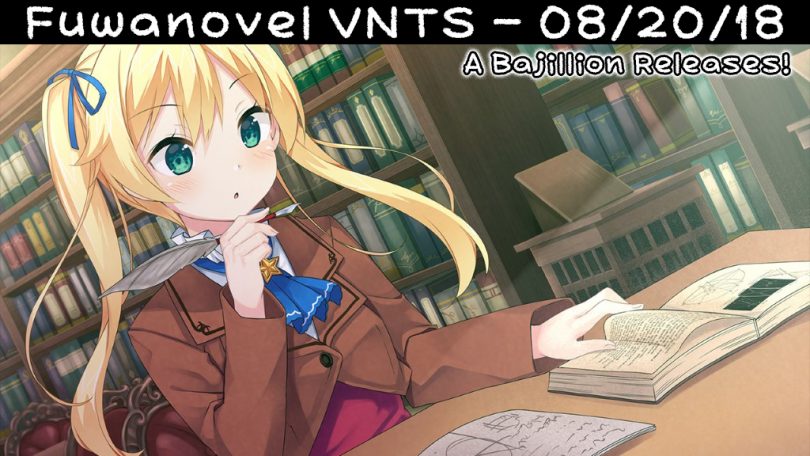 This week’s header image comes from Newton and the Apple Tree, one of the new releases since our last update.

From The Team:  It’s been seven weeks? Oops. We can’t apologize enough for the extended absence. I’ve basically entered crunch time in my current project so things will remain touch and go until late October (see below for why!). Maybe, hopefully, these will be less sporadic once Sanoba Witch releases. Until then, though, expect only one or two updates, unless Tay comes back to save us all. This update contains spans from AnimeExpo to Otakon and more. There’s a lot to cover, so let’s get started!

The “Short” Version: Everything That Happened Since July 2nd
(Basically, a List of Every Project That Isn’t Dead and Its Current Status)

…wait, there’s really no reason for me to scream. Sure I have a re-exam coming up that I haven’t studied for, but I have like, six days to do that. So presumably I’ll crash and burn and not study at all, fuck. And I have to sort out some stuff about what courses I’m taking next quarter-term. And I have some doctors’ appointment on the 22nd. But, like, this is manageable. N-no worries.

Anyway, a lot of things have happened! The Flowers vol 2, Schatten, Happymare (I refuse to use the official spelling, also the tl looks a bit low tier though not disastrously so), and Newton releases all provide tantalizing options for whenever I don’t feel like reading in Japanese. Which has sort of been about half of what I do in a day for ten or so days now, the other half being shooting the breeze on like 5 Discord servers because what is focus anyway. Biggest surprise: Shinku not having the loli personality.

It’s amusing that we happened to go on hiatus during peak announcement season, but at least it lets me give you my view of it all: definitely lukewarm, but some very interesting VNs were picked up. Something that might have gone beneath the radar of many is YU-NO, a classic sci-fi visual novel with allegedly very annoying old adventure style gameplay that kept me from trying it for a while now. As I understand it the remake didn’t fundamentally change the gameplay but according to a guy I know there were some little touches added that made it a lot less frustrating to go through overall, so I might try it out at some point. The ero removal I think I can live with, especially if they keep to how the Japanese version did it, which seems to not have cut out all that much and been very lewd indeed (probably not as ridiculous as the Kikokugai remake, but still).

JAST announced a whopping three BL VNs and MG one; I wonder if the success of NTY was the inspiration for this and the earlier pickup of Sweet Pool by JAST. Nitro+ Chiral was sort of an obvious pick for JAST given their partnership with Nitro+, but it’s interesting to see them announce them at the same time. They all look to be somewhat edgy and plot-oriented, so maybe I’ll be interested too. Then again, the Japanese kamige backlog isn’t going away anytime soon. Gah.

Totono is very polarizing in the Japanese-reading community, but I’m definitely interested. Maybe the less I say about it the better. I’m still annoyed that a random VN article for normies casually spoiled parts of it for me like two or three years ago. Verdelish working on it both reassures me and makes me happy since she’s a big fan and a respected translator.

Island gets a lot of flak for having a lot of boring SoL before doing anything interesting, so basically it’s a typical visual novel. Um, kind of lost my thread of thought… right. It’s written by the writer of Himawari, which I know is enough to sell it to some people in the audience. Maybe I’ll just finish Himawari first, but then I have to fix my desktop, gah. Adulting sucks, man.

Harukuru is another sci-fi title I’m interested in. Unlike Island which apparently has a lot of SoL in the start, Harukuru has like 15 (13? can’t remember) H-scenes in the beginning, whew. They seem pretty amusing though so there’s that. Meru’s translating it as far as I know, I feel reassured by this.

The Expression Amrilato (kotonoha amrilato sounds much better, sorry) is an interesting pickup from a translation perspective. People I know who don’t subscribe to the “untranslatable” meme have called it untranslatable without a hell of a reworking and probably a dub. And yet it’s not really hard to read in Japanese; I played through the trial a while ago. The problem is that Japanese and Esperanto are much further apart than English and Esperanto, and there’s further challenges due to things like differences between english-esperanto-japanese being used sometimes. All in all I wish whoever tries their hand at this the best luck available.

428 is old (though it doesn’t look that old), weird, and very interesting. Perspective switch options, photorealistic illustrations, tense plot? Sign me up.

Apart from the announcements, they say Neighbor’s demo is coming out soon. I never really read much more about it than “it’s in the horror genre” since I like to go into things I’ll probably want to read with as little knowledge as I can, but the demo I’ll try for almost-sure. Verdelish is on this as well, so reassurance, etc, etc.

Nekonyan cares not for earthly conventions like… announcing things at conventions, but they’re planning to announce two titles this month. One is supposed to be something for the chuuni lovers that cost a heckload of money to license, and one a bit cheaper and more for the moege side but still a title likely to please. There’s a lot of good contenders for either, though Aokana seems to be a favorite pick for the moe one. But it’s really wild mass guessing at this point, so who knows? One of the founders of Nekonyan is a big Favorite fan, so maybe we’ll see Irotoridori no Sekai or something. Then I could race to finish it before it becomes kusoge, which is always interesting. Though I failed hard when it came to Subahibi. Curses.

…oh and our very own Dorg’s Sisterly Bliss (tsui yuri) translation is finally getting released soon, so maybe I’ll poke him about it forever. Except Fred edited it, so it’ll probably be spotless. Fuck. Hey Dorg, how do you feel about the Kimihane 2 delays? Oooh yeah, gottem. Wait, I want it too. Gah…」

Phew, I needed that. My life has been a bit of a mess lately for a million different reasons, but even I know when enough is enough, and apparently that’s six weeks with no updates. I was burning out on editing pretty badly (not good when you have deadlines!), took a break, then sort of changed my work schedule a bit, and now I feel a billion times better despite working harder than ever. When you’re burnt out, you sorta lose motivation to do anything at all, so I ended up neglecting VNTS. Sorry, y’all.

The only new release I’ve been playing lately is Evenicle. It’s really freaking good! It seems to be getting a mixed reaction from fans. I know several Rance fans who picked it up and not liking it. It’s a very different beast from those games, though, and I love the irreverent tone and absurd characters. A lot of the characters are fairly one-dimensional, true, though that one dimension entertains me to no end. The cast are such lovable idiots. I wish to protect them all. Especially Kath. The gameplay is admittedly lacking, but it’s simple enough to not bother me, and the game world is pretty huge and fun to explore. Evenicle is just good fun. I also picked up Schatten and gave that a spin for a few hours. I liked what I played of it, but I just don’t have the time to play it much more for the time being. Hopefully I’ll get back to it some time.

The general mood regarding this year’s con announcements seems rather lukewarm, and I can see why. But there are still a few announcements I’m looking forward to. Totono is a game I’ve been interested in basically ever since I first got deep into VNs. The translator on it is fantastic (Verdelish) and the translation is already done, so I’m pretty hyped. Farther than the Blue Sky also has me excited. It’s commonly lauded as Chuable’s best VN, and its premise seems up my alley. Seeing a second Chuable title get announced when the last we knew was that MG was stalled by the company’s bankruptcy is surprising, but it’s good news overall. Hopefully that means the way has been cleared for SukiSuki.

Until next time, whenever that may be, peace.