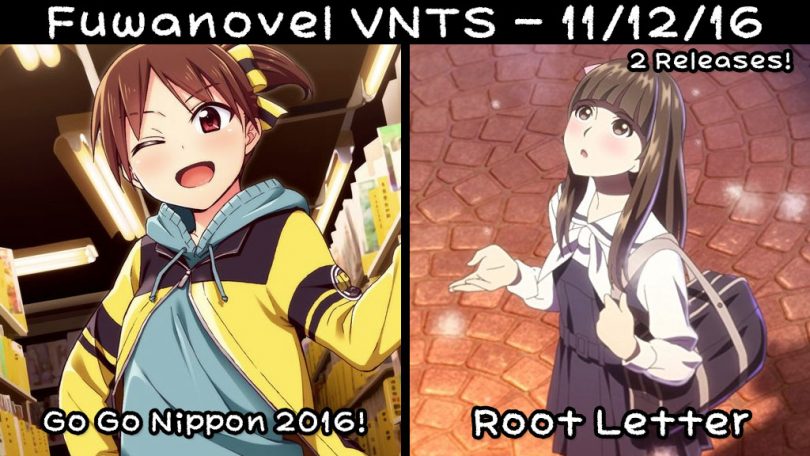 Hey everybody! You’ll soon notice that the Apathy – Midnight Collection Vol. 1 project got an interesting update. Interesting in what way, you ask? Interesting because the patch is being developed using Visual Novel Reader (VNR). I know that not all of you have tried VNR before, so I put together a quick tutorial for getting set up and running with it down in the commentary essays.

11/12/2016 Dracu-Riot! Addendum (This came out after I finished the tables): The Oxford Comma team put out a post which explains last month’s accidental patch release and goes on to further say that nothing will be released until the entire project is finished. No ETA at the moment. (Link)

「Will Zaka appear? Only time will tell…」

Hey there everyone. Don’t mind me, I’m just gawking at these insane Sharin no Kuni kickstarter tiers. A laptop tier with special SnK art on the lid? Seriously? Actually, that’s kind of cool. Actually a lot of these tiers are pretty cool and offer surprisingly decent value. There’s also some special collector’s items that seem pretty awesome. It’s also the first VN kickstarter I can think of that will give you an Akihabara guided tour alongside a meeting with the presidents of two huge Japanese VN companies. It comes at a hell of a premium, but I think there will definitely be some people willing to pay. That’s really not an opportunity that’s easy to come by for us western fans.

So yeah, I actually expect this second attempt to be very successful. I would be shocked if they don’t meet ther goal. It’s a lower goal, they have some excellent premium tiers, some pretty good mid tiers, and an acceptable entry level price. The only thing I don’t love about it is that they still have a physical tier that doesn’t come with a steam key. I get the mindset behind it, I just think it’s a flawed, overly punishing mindset that will cause their backers who expect the game to ship on time to feel ripped off (because no, it won’t ship on time). Look at what happened with Clannad. You just have to accept that some people will sell their keys if it will overall make your backers much happier and willing to spring for physical copies. VNs are still the only game types on Kickstarter which don’t give keys on ALL physical tiers.

Other than that, Hell fucking yes, Himawari at last. I have to say, I didn’t have faith. I really thought it was going to slip into 2017 but MangaGamer is managing to just barely pull through on this one. And just one week before my birthday, too! I’m actually allowing myself to get hyped for this release which is very unusual, typically I intentionally keep my expectations low. I only hope it manages to live up to that hype.

And one Himawari is leaving for another to rotate in to take its place. Have to say, that one I’m much less excited about. I’m always a little cagey when a Japanese company wants to do their own thing on Greenlight. The screenshots of English dialogue they released had sparse text so it’s hard to truly judge, but it already contained one major misstep: “I also love you” instead of “I love you too.” The latter of which happens to be one of the most commonly spoken phrases in the English language. Imagine pooling together every ounce of courage in your body to confess to the person you love, only to have the recipient stare at you, eyes dead and voice monotone, quietly uttering “I also love you.” Very romantic, no?

Eh, whatever, they say it’s not final, and they’re probably right. I just hope those are not final in the “we haven’t even begun yet and some intern whipped those up to show people there will be an english release” sense, and not in the “Our translator did this but we haven’t proofread it yet” sense. UPDATE: I didn’t read the story summary and only looked at the screenshots, and oh god that story summary. Okay, yeah, I really hope that this isn’t just “unfinished” but “not even started yet, everything will be redone from scratch.”

Well that’s it for me, take it easy everyone.

Okay! So. Apathy – Midnight Collection Vol. 1, a game which is made up of three narratives, had one of the three hit full TL this week: Hashira no Kizu section is now finished. That means two of the three have hit 100%.

Quick Guide to Getting Started With VNR: