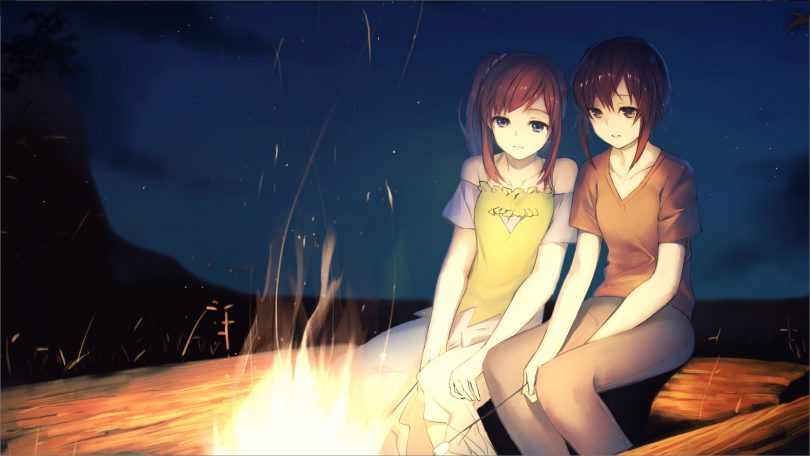 Hidden treasure, hitchhikers, yuri, and the vast, beautiful, open expanse of the American Southwest. Alienworks have chosen an interesting setting and premise behind their upcoming yuri themed EVN, Highway Blossoms. Josh Kaplan, the project lead for Highway Blossoms, was kind enough to let me play through a pre-release demo of the game.

In Highway Blossoms, the discovery of an old gold rush miner’s journal, filled with cryptic clues as to where he’s buried treasure, has sparked a new, modern gold rush as people race to find the hidden treasure. Amber, a young woman, could care less about this. Her grandfather has passed away, and still mourning the loss, she drives around the southwest US in the motor home he left to her. One day Amber picks up a hitchhiker, Marina, wandering through New Mexico – a chance meeting that begins to turn her life around.

The demo for Highway Blossoms picks up sometime after Amber and Marina meet. The two are scaling Angel’s Landing, a famous, scenic rock formation in Utah. Some sort of tension stands between Marina and Amber though, making this trek up the massive rock formation awkward, and that much more difficult as the two won’t really rely on each other. They both look forward to a grand view of Zion Valley at the top, but are instead greeted by fog entirely obscuring their view of the valley below. Disappointed that she couldn’t see what her grandfather always wanted to see at the top, Amber makes her way back down the mountain with Marina in tow. The two later make up by a campfire, after Amber shows Marina that burnt marshmallows are superior to lightly toasted ones when making s’mores. The two then tell each other a little about their families. Marina came from a large family, and she rarely traveled as her parents could not afford it. Amber came from a broken family, barely knowing her dad, and being abandoned by her mother. Her grandfather raised her, and it was always just those two. Marina comforts Amber and the two turn in for the evening.

I can tell that the relationship between Marina and Amber will start off icy. The opening scene of the demo tells us that the two still have not quite figured each other out, as each character awkwardly tries to ease the tension between them. Watching the two learn more about each other towards the end of the demo was satisfying, and was the perfect way to give information to the reader without resorting to an info dump. The demo clocks in at only 15-20 minutes and did not give me much time to really get a feel for the characters, but I hope their relationship will leave me feeling like I went on a journey as the two grow together as people. Both, in the demo at least, came across as immature and somewhat childish, which can be cute at first but really wears on me the more I read.

It appears that Alienworks, the development group behind Highway Blossoms is going for a realistic take on the American Southwest. Angels Landing and Zion Valley are both real places in Utah, and are popular tourist attractions. The background art at the top of Angels Landing is accurate to the view of the real life counterpart. This is exciting for a few reasons, chief among them that the American Southwest is gorgeous with plenty of variations in wildlife, terrain, and weather. Highway Blossoms has plenty of interesting settings and locales to choose from, and I hope the developers and writers take full advantage of this.

The art of Highway Blossoms is gorgeous, and in full HD, and with some simple animations, such as moving fog and a campfire burning, it teases some high production values not matched by many EVNs. This feels less like an amateur attempt at a VN and more like a professional group. It is impressive considering Alienworks has yet to release a VN.

Highway Blossoms was not on my radar before I played this demo, but the little 15 minute read that I got was enough to pique my interest. The VN has plenty of potential to be great. It sports some vibrant high definition art, a unique setting, and two main characters that hopefully will grow together, as well as as individuals. I wish Alienworks the best of luck with the release of Highway Blossoms. The VN is set for a Q2 2016 release on Steam. An 18+ release will be available through Denpasoft with a free patch made available for Steam users.

A pre-release demo was provided by the developer.