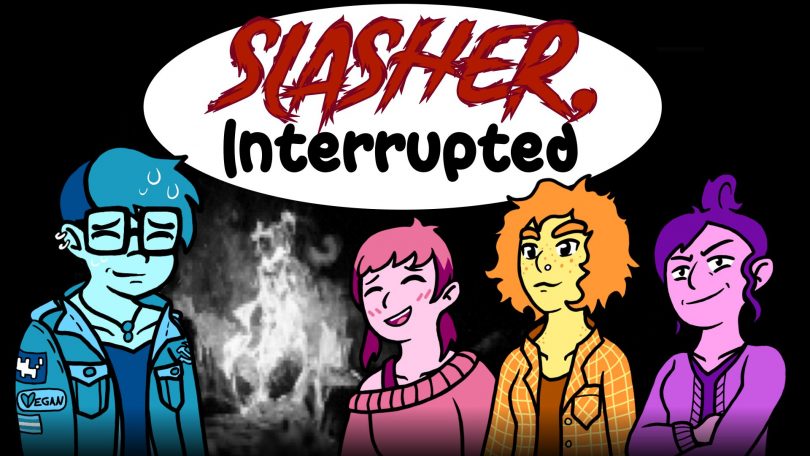 SLASHER, Interrupted is a short visual novel included in the 10MG series. The 10MG series is exactly what it sounds like, very brief titles that are finished in under ten minutes, but that aim to use what little time they have to create a lasting impact. SLASHER, Interrupted comes to us from UK-based trans indie dev Freya Campbell, who is also a designer at Supermassive Games.

If you realize that I opened this exactly like my review of Cover Me in Leaves, then congratulations on your memorization skills. Yes, there just so happen to be two short visual novels in the 10MG series made by trans devs with LGBTQ+ themes and that are also fitting for Halloween. That’s where the similarities end, though.

You know this game is going to be cute when there’s a content warning for weed and swearing.

SLASHER, Interrupted is a much sillier game than Cover Me in Leaves. The premise is that you are a trans girl named Emily, or whatever you decide to name her. There’s no references to her being trans in the text, but she has a trans flag and a hammer and sickle on her jacket, so that’s basically a dead giveaway. Emily is in a polyamorous relationship with three other girls named Ellie, Rosie, and Caroline. Ellie is the soft “uwu I like cute girly things and am baby” member of the polycule, Rosie is the stoner chick who likes funny things, and Caroline likes shit that’s dark, scary and bloody. Therefore she’s best girl.

The four of you are camping, and you are telling a campfire story. At three points in the story, you can choose what happens to appeal to one of the three girls. You can either pick all three choices to appeal to one, which gets you their respective endings, or you could mix them up. There’s a total of 27 possible combinations, but there’s nowhere near enough differences in text to be worth going through every one of them. I stopped at around seven or eight, which gave me about 40 minutes of playtime, which is good for a game where one playthrough is over in less than ten. While not every variation is completely unique, there are some interesting results that happen if you decide to pick Caroline’s twice, then end it with Ellie’s cute suggestion, or vice versa. 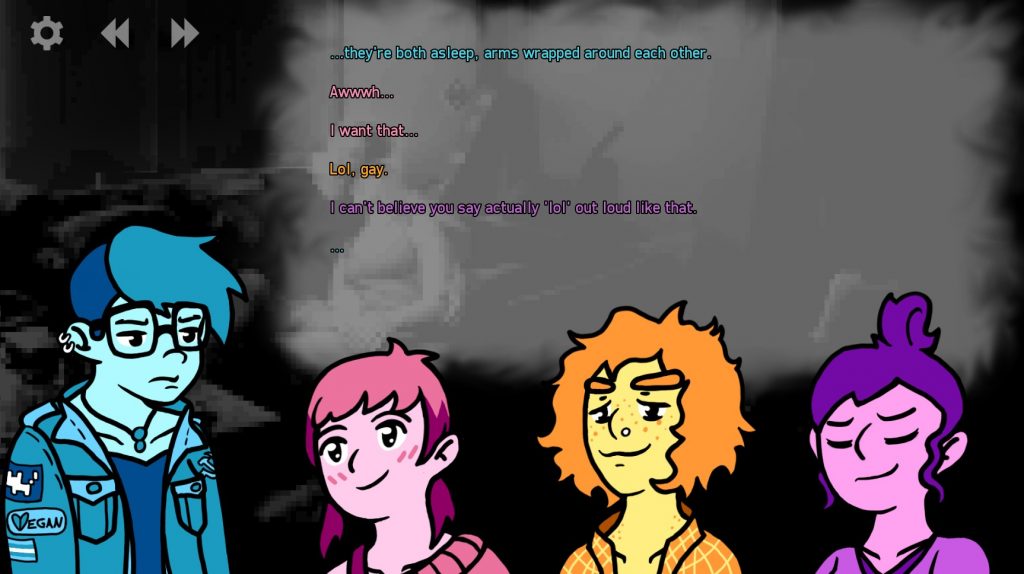 Of course, the campfire story itself is total nonsense, and the appeal comes from the polycules’ interactions and silly quips, which may even be altered depending on the details of the story. There is more than enough cute and funny moments to make this worth a few readthroughs. The visuals and the soundtrack both did an excellent job at evoking the comfortable tone the game was going for. The track that plays while you’re telling the story is very catchy, and the character portraits are all cute and expressive.

If there is one small criticism I have, it’s that there isn’t a “skip text you’ve already seen” option. If there was one, it may have provided more motivation to scroll through all 27 variations. The actual deciding factor for this game is its short length, though. Anyone who plays a 10MG game should already know they are getting a ten-minute game, that’s literally what it stands for after all, but if you’re the type who needs a lot of content, this likely won’t be enough for you. SLASHER, Interrupted is something that may be better to just occasionally re-read with friends or even partners of your own just to have fun and goof off with for a short time. 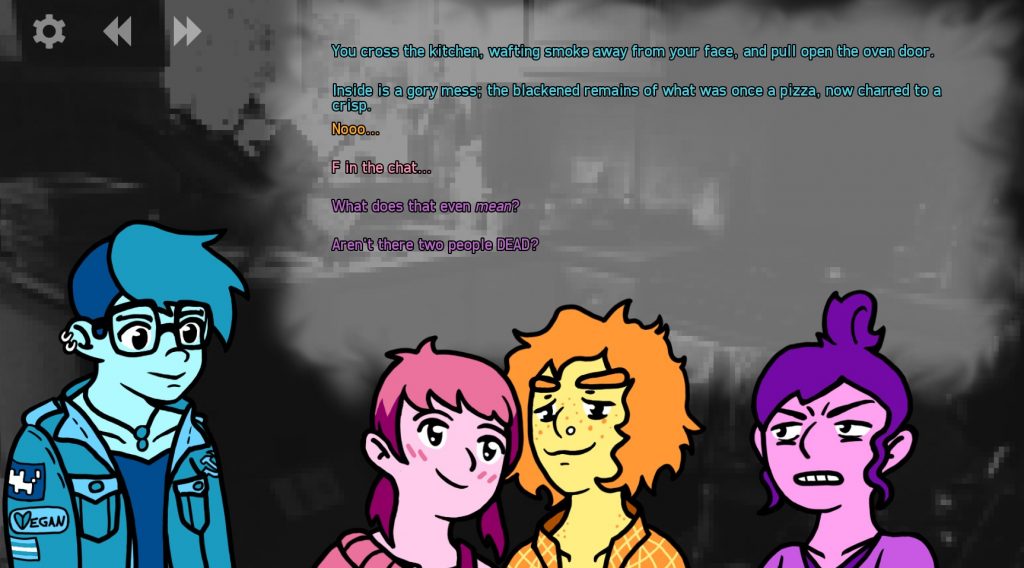 The game is $2.00 full price on Steam if you haven’t already got it from a Bundle. It doesn’t fit the “dollar per hour” rule, but I’m pretty sure $2.00 isn’t a lot of money to most people.

Annie Gallagher is an american trans-feminist blogger who runs GuardianAcorn, where she’s built an impressive list of pieces writing very detailed articles about video games, visual novels, politics and everything interesting to her. Her writing consists of reviews, deeply analytical pieces, video game music critique, poems, original fiction and more. She approaches things from a philosophical and introspective manner that is meant to touch upon things most people never tend to notice.