For this review of ebi hime’s new release, I can’t find a better place to start than with one of her much older projects – a small freeware VN called Is This The Life? Published back in 2015, it tells the story of a teenage French boy, Louis, struggling to cope with his mother’s death. He lashes out, at times violently, against the world that not only deprived him of the most important person in his life, but what’s worse, is moving forward with little consideration for his suffering. It’s a painful story that focuses on a main character who the reader can sympathize with on certain levels, but not necessarily like as a person or enjoy following, considering his chaotic and hostile behaviour. The VN is also content with portraying Louis’ rebellion without providing a real turning point or a resolution, showing that the healing process for someone this hurt and lost can’t be swift or easy even in the best of circumstances.

The topic of today’s review, the psychological drama The Mermaid of Zennor, shares some of defining features and plot dynamics of Is This The Life?, while pushing the story into even more complex and uncomfortable territories. Centered around Lilac, an isolated and depressed autistic girl, it explores her unhealthy obsession with her older step-brother, the only person that consistently showed her attention and kindness throughout her life. Lilac’s delusional, unrequited love becomes even more pervasive and destructive when her brother leaves their hometown to study in London. And when he comes back with another woman at his side… Quite predictably, this setup leads to a lot of angst and at times genuinely disturbing developments, making for one of the most taxing experiences I’ve had reading a VN – but also one with qualities and possible story resolutions that make it a lot more attractive than this description alone would suggest. 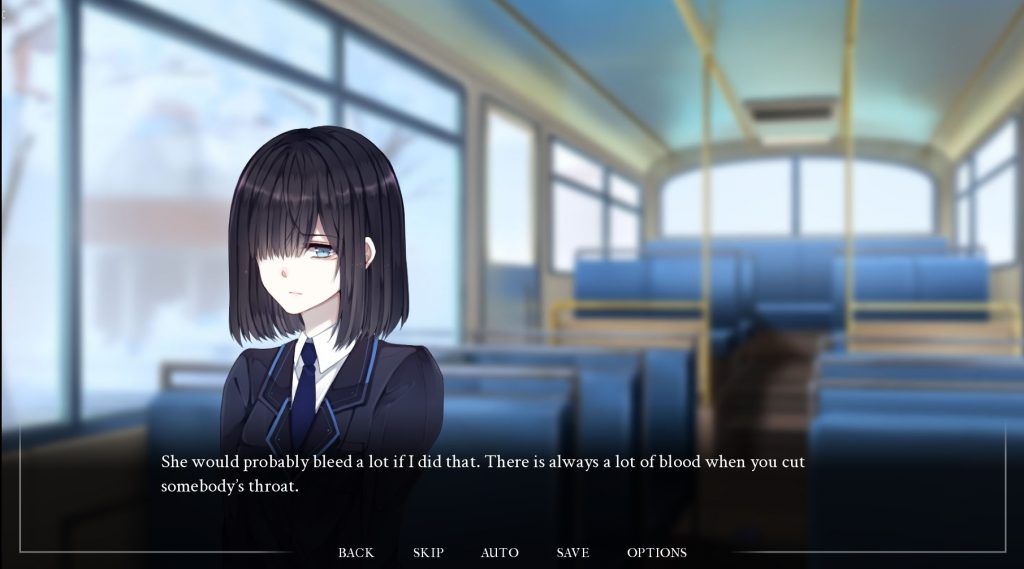 Lilac’s thoughts can be a source of dark humour, but her troubled relationship with the outside world and her obsession with her brother mostly make the story alternate between melancholic and disturbing

The Mermaid of Zennor is set in the titular village in Cornwall, famous mostly for the legend of a mermaid that tragically fell in love with a member of the local church choir. A gloomy, remote location is the scene of the protagonist’s own destructive obsession, in this case, directed towards her older sibling. The sources of this unrequited love are fairly easy to identify – while Lilac’s parents, having a horrible relationship with each other and showing little tolerance for her eccentricities, made her home at best cold and at worst actively hostile, the brother, Jesse, was her only source of warmth. Her situation at her middle school, defined by bullying and often unempathetic teachers, only made her isolation and dependency on Jesse’s presence worse. When he leaves Zennor to study in the city, she’s absolutely devastated – and while Jesse’s visit during the Christmas break promised to alleviate the misery at least a little bit, the appearance of Skyler, his new girlfriend, sends Lilac into a downwards spiral that quickly threatens to end in tragedy.

The story in The Mermaid of Zennor is told fully from the perspective of Lilac, giving us insight into her peculiar and often contradictory way of thinking. Because of her all-around difficult situation her thoughts, aside from the obsessive love for Jesse, are often filled with violent resentment against people around her – a feature which, along with genuinely unpleasant and cruel situations she encounters, make for a very harsh reading experience. She is above all a misunderstood and hurt child, barely holding it together against the pressures and injustice she faces, but that doesn’t make her reactions and delusions any more pretty or less frustrating to observe. There is a decent potion of dark humour connected to her misunderstanding of people’s emotions and some childishly violent thoughts, but the overall tone of the story makes it something that can be compelling to follow, but hardly “fun”. This pattern only intensifies as the story progresses, with jealousy and hate becoming the primary emotions driving Lilac’s actions. And while the good ending offers a grounded, believable way out for her, the bad one is simply gut-wrenching and something more sensitive readers might have troubles processing. This is not a VN for everyone, even by ebi’s standards and you should be aware of that when approaching it. At the same time, the game never crosses the line towards trashy, over-the-top edginess – the patterns of its tragedy are very believable, maybe even mundane, which makes the story relatable and the emotional impact of it all that much stronger. 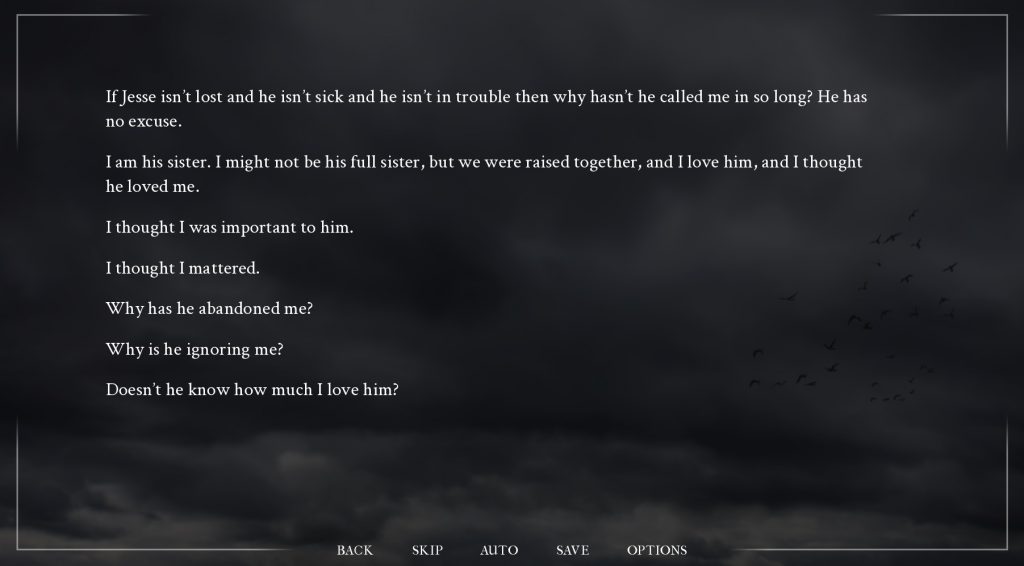 With Lilac’s being the only perspective through which we experience the story, the writing always reflects her peculiar and in some ways disturbed mind – an endeavour that is well-executed, but adds to the taxing nature of the whole experience

While the experiment of telling the whole story from a perspective of an autistic character was already rather bold, the visuals and particularly the sound design of the game follow suit. The opening screen is dominated by a broad, animated view of ocean waves at night, accompanied by unsettling electronic music. It’s both spectacular and suffocating, hinting very accurately at the climate of the story. The soundtrack continues with similar, disharmonic ambient sounds throughout pretty much the entire story, underlining the deteriorating psyche of the protagonist. The one downside of this approach is that even the lighter scenes, like those of Lilac talking with her only friend or the school psychologist, are weighted down by gloomy sounds. The unrelenting nature of the music at some point drove me to mute it and run my own tracks in the background – not because it was bad by itself, but because it made the depressing climate of the game overbearing. This probably could’ve been alleviated with more variety, as the soundtrack also felt relatively monotonous, while the game’s pacing had more ups and downs and wasn’t a simple downwards spiral (quite unlike Lynne, the short horror game by ebi with a soundtrack by the same author, where this style of music synchronized very well with the leading theme of stress and the constantly-progressing mental breakdown of the main character). Overall, the sound design was in my experience the weakest part of the VN and maybe the only one deserving serious criticism.

The visuals, on the other hand, left me with little to complain about. While minimalistic, the UI fits perfectly with the story and its gloomy climate. Character and CG art is probably even better, although only four central characters have sprites and only a small bunch of crucial scenes receive custom illustrations. This is obviously connected to the small size of the VN (around 45k words) and its niche nature which would make a big budget unreasonable, but at the same time, nothing in here felt lacking. The illustrated characters are the ones Lilac pay real attention to and others being invisible goes very much in line with her sense of isolation and detachment, while the sprites themselves are very nice to look at. And to be completely honest, I had to somewhat force myself to take note of the visual side of the game when the story became more intense – I was captivated enough by the writing and weight of the story to not pay much attention to anything else. 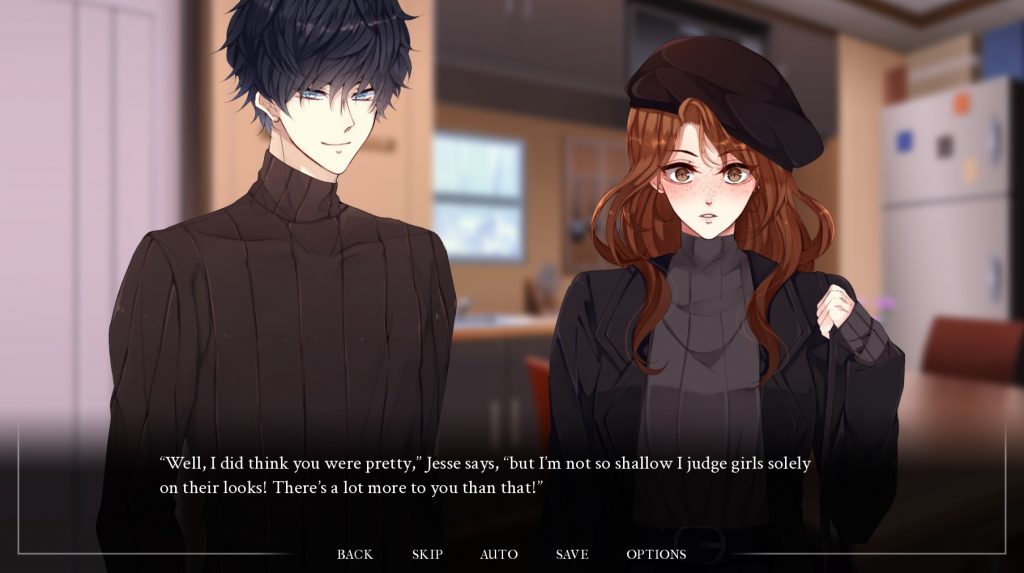 The game’s art isn’t flashy, appropriately to its setting and climate, but that certainly doesn’t make it low-quality or without some genuinely eye-pleasing elements

If there are any other caveats I have to mention the biggest one is the limitations this VN put on itself with its formula. With Lilac’s character voice defining the style of narration and storytelling, the prose can often become simplistic and repetitive. Also, some of ebi’s favourite literary tricks, like story-within-a-story segments, do not have the depth and stylistic flair you’d usually see in her work. This was made particularly obvious to me with the game’s retelling of the titular mermaid’s legend – it was rather short and blunt, very much in line with the style of Lilac’s narration, but not that satisfying to read. There is also a very clear imbalance in how certain characters are developed – especially Jesse and Skyler are seen through the lenses of Lilac’s obsessions and insecurities, with somewhat little to build them up as actual people the reader could assess or understand. As central as both of them are to the story, they end up feeling slightly one-dimensional – and in the case of Skyler, just a bit too perfect.

There’s no doubt that The Mermaid of Zennor‘s concept and the clear focus on exploring its main character make it a particularly niche experience and I would be wary recommending it to more casual readers. For those that can appreciate its craftsmanship and powerful emotional impact, however, it’s going to be a very rare and compelling treat. All the anxiety I’ve experienced while reading it was never due to lack of quality and certainly didn’t translate into lack of satisfaction – while not necessarily pleasant, it was a worthwhile experience all throughout. And for the very reasonable price of $5… There are few VNs of this quality you can grab this cheap – if you think you can handle The Mermaid of Zennor‘s angst, you definitely won’t regret the investment.

Buy The Mermaid of Zennor on Steam or Itch.io

+ Interesting and consistent characterization of the protagonist

- Only for readers with a very high tolerance for angst