This will be a pretty unusual review on Fuwanovel, as for the first time we tackle a game so strongly connected to our community. Digital Seclusion is a short, retro-stylized kinetic novel created by a long-time regular on our forums, Zalor, and edited by none other than our Fuwazette chief, Zakamutt. After a long, but rather quiet development it was published for free on Itch.io February 4th this year. And while neither its creation nor its release was accompanied by much fanfare, in my opinion, it’s a mesmerizing love letter to the early era of Japanese visual novels and stylistically one of the most interesting short VNs I’ve read in a while. Being in relatively friendly terms with the author and heavily invested in Fuwa as a whole means I can hardly claim impartiality, but I hope you’ll be willing to listen to my take on why this game is very much worth your attention… despite at least one significant flaw. 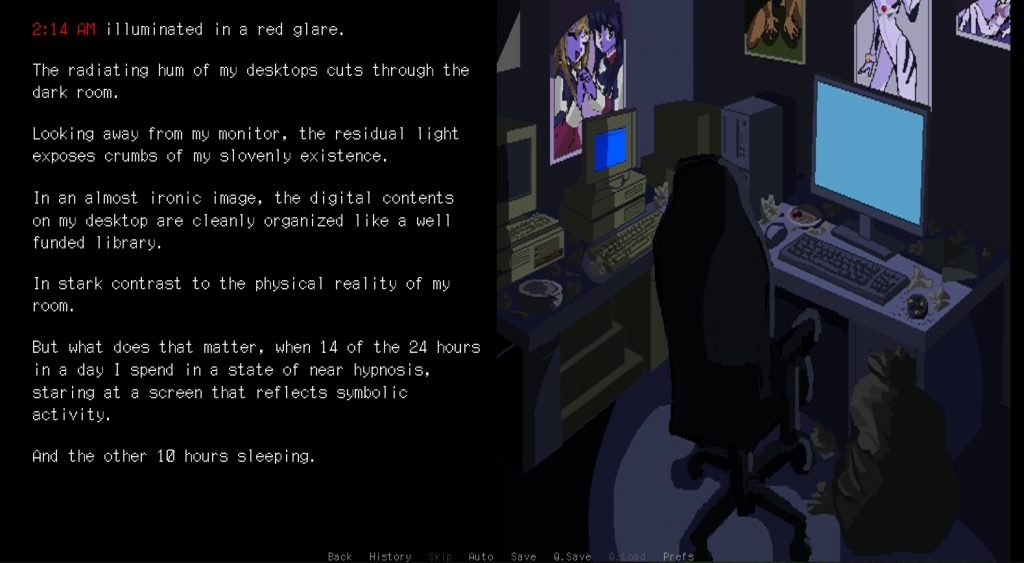 Digital Seclusion follows the story of an unnamed hikikomori protagonist who organized his whole life around PC-98 visual novels. His home is full of authentic Japanese hardware and software from that era, all of it barely known to anyone in his part of the world. His mostly nocturnal, asocial routine of only rarely shaken up by the outside world, and even those disturbances hardly extent beyond delayed online deliveries or distracting weather. In near-perfect isolation, his time and thoughts are completely dedicated to his favourite pieces of media and the blog that catalogues his thoughts and knowledge about them. At least, until something inexplicable appears in his solitary life, taking the form of one of his favourite heroines…

Written without context, this might seem like an introduction to a strange love story, but the grim tone of the VN quickly makes you realize it could never go in such a direction. And ultimately, the narrative parts of the game mostly act as the framing for its main content: commentary about early-era visual novels and the meaning they hold to the author. Zalor writes with both nostalgia and deep knowledge about how PC-98 games laid the foundation for what VNs are today and the value they can still hold for a modern reader. Despite the cynical facade of the protagonist, everything he says is filled with conviction about the immense potential visual novels hold as a narrative medium and appreciation for what the best of them already achieved. The specific games chosen and thoughts that accompany them will be very familiar to long-time Fuwanovel members, as these are mostly indistinguishable from Zalor’s own fascinations and opinions. For anyone else, they will prove to be either a great nostalgic trip or a well-written and convincing introduction to that era of VNs. 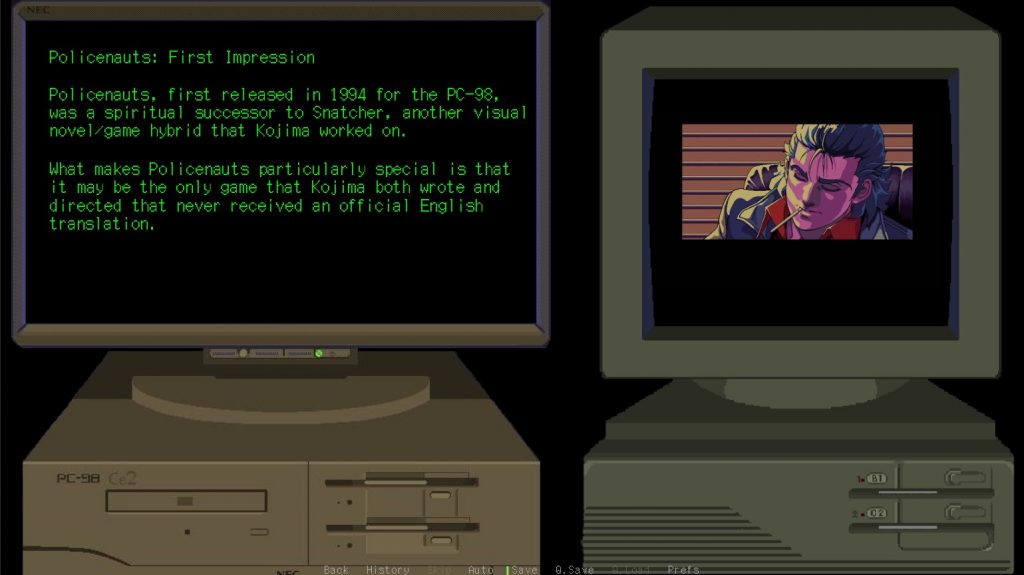 The focus on paying homage to the early era of VNs makes Digital Seclusion more of a blogging endeavour than an actual story, but solid writing and visual polish makes that formula a lot more compelling than it sounds

While the blogging parts are, in my opinion, excellent, both in style and substance, the actual story of the game is worthwhile mostly whenever it’s used to further elaborate on ideas expressed in those commentary sections. The appearance of the pixelart apparition, apart from driving forward the minimalistic plot, is a necessary vehicle to discuss protagonist’s more extreme ideas and the value of dedicating oneself to obscure (and arguably obsolete) forms of popculture. Every blogger or author engaging with niche media will likely find those fragments interesting (and I’m, quite obviously, well within that group). The whole rest of it, that is pieces of protagonist’s biography or details of his shut-in life and the anxieties it creates, rarely bring anything interesting to the table, despite being well-written. The personal subplot has slight touches of denpa-style horror, with unsettling dream sequences and the dubious reality of what the main character is perceiving, but it doesn’t commit to any such theme to a satisfying degree. That problem is only made worse by the games’ inevitable bad ending. I won’t spoil anything more, but while the final sequence properly concludes the story (and even makes a point about it being the only possible outcome for the protagonist), for me it seemed rather predictable and hardly made me feel anything. It’s not awful, in a way that could hurt the valuable parts of the experience, but makes it even more important to not approach Digital Seclusion expecting a great storyline – that aspect of it is simply serviceable.

When it goes to the presentation, everything in the game is kept within the early-to-mid-90s graphical style, while the UI mimics various vintage computers PC-98 games would originally run on. This is further spiced up by sampled music, voice acting and scenes from various 90s and early 2000s VNs. The blog sections benefit from this in a particularly striking way – what could otherwise be an experience akin to reading a decent VN fansite is brought to life with fragments of the games in question and their (or at least period-appropriate) soundtracks. The credits shown after at the end of the game explain the origins of all the assets, often with additional bits of commentary about their significance, both personally for the author and visual novels as a genre. Overall, the stylistic cohesion and immersiveness of Digital Seclusion are an awesome achievement and make what on paper could be a slightly dull formula into something deeply memorable. Of course, it owes that effect to some extent to the excellence of “borrowed” visuals and music, but the original assets are solid enough to blend seamlessly with those and create a consistently impressive package. 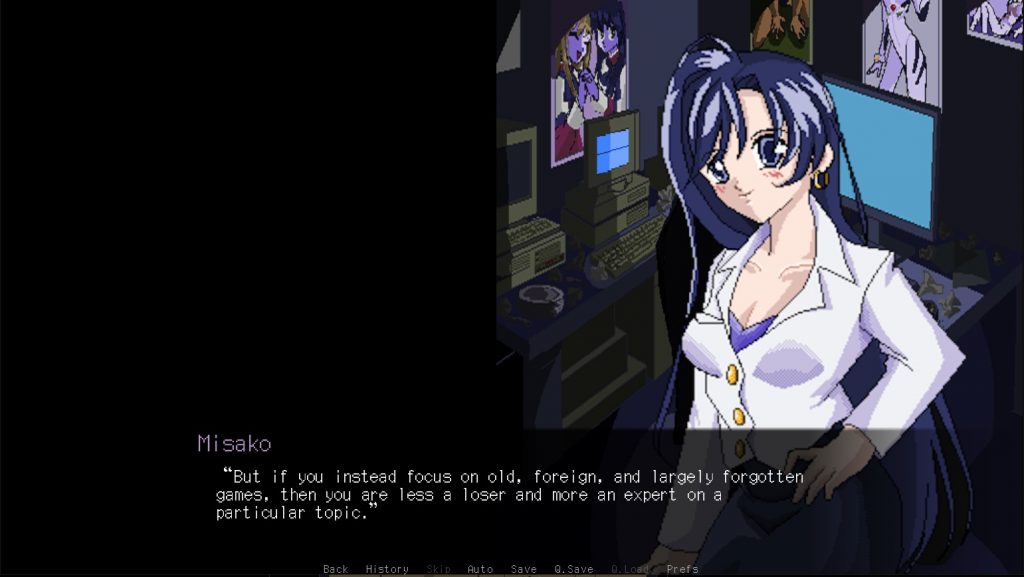 The “supernatural” subplot leads to some interesting conversations about the nature of engaging with obscure, often half-forgotten media, but is overall the weakest part of the experience

If I had to complain about something, aside from the story details mentioned earlier, it’d probably be the game’s love for flickering screens – another effect added for the sake of immersion that on one occasion managed to give me a headache, even though I’m not particularly susceptible to such reactions. There’s also the issue of whether I’d willing to recommend for everyone to read this VN and to whom it could be most appealing. It’s obviously a very personal project, but for people who have no reason to care about that its main value will lay either in nostalgia or in the compelling and informative nature of its commentary parts. The love for VNs in it is so visible and well-articulated that I was tempted to push it as a good introduction to the history of visual novels, but the unsettling parts of the protagonist’s lifestyle and the sheer association between VNs and waifu-obsessed shut-ins make it way less viable in that role.

In the end, Digital Seclusion is a game by Zalor and for Zalor – or to be less meme’y, a personal journal of sorts that will appeal to likeminded VN fans above anyone else. Niche by design, but also so competently put together that if you have even minimal interest in the period it tackles, you should find some enjoyment in it. And as I think everyone that might end up reading this article has at least some affection for VNs… Give Digital Seclusion a try. It’ll be 1,5-2 hours well spent.

+ Great use of sampled music and visuals