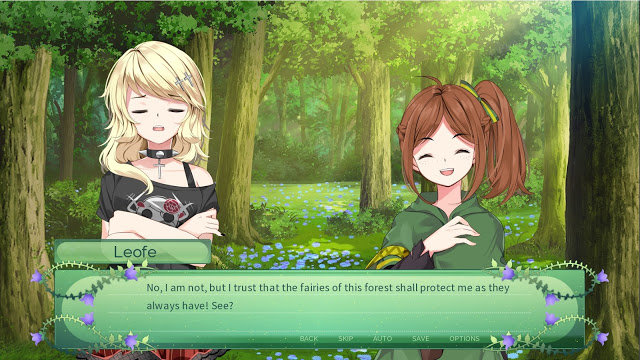 The last time we talked about a “modern fairy tale” VN with a yuri spin to it, it was a very special one – Studio Elan’s Heart of the Woods, which I confidently gave my first and, so far, only 5/5 rating. The way it mixed relatable, modern characters with an emotional fantastical plot resulted in an experience in many ways unmatched within the EVN scene. It also showed the huge potential of this formula, handling the clash between mundane and supernatural in a different way than typical fantasy or horror stories. Today we’ll be looking at a game that took similar themes and utilized them a more low-key, light-hearted way – ebi hime’s newest yuri VN, The Fairy’s Song.

Released on Steam and Itch.io early August 2020, this project is a slight departure from ebi’s usual, angst-filled storytelling, focusing more on cute romance and comedy. Fairly similar in tone to 2016’s Strawberry Vinegar, which also combined modern-day slice of life story and supernatural elements, it plays on classic themes of knights, monsters, magic and sleeping beauties, but puts them in a configuration that gives the whole setup a very different meaning… Which doesn’t necessarily mean The Fairy’s Song manages to offer many surprises or that it feels particularly fresh in how it utilizes those tropes and story elements. But why is that exactly, and is it really a bad thing?