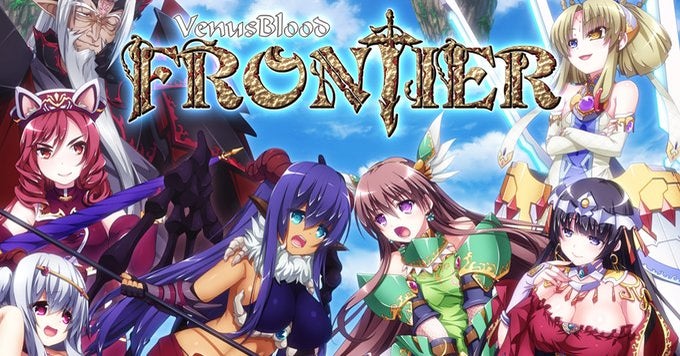 When it goes to the Western market for Japanese eroge, VenusBlood FRONTIER is one of the most interesting marketing phenomena in the recent past. Belonging to a series that is most known for its corruption theme and related sexual content, it was rather brilliantly rebranded with a focus on its in-depth gameplay mechanics and the morality system which allows players to shape the fate of its fantasy world in various drastic ways. It is also a game I was highly anticipating because of its rare premise – the ability to play as an anti-hero protagonist who can either become a ruthless oppressor, or a benevolent tyrant protecting the world from destruction and terror. All this coupled with a set of goddess heroines that can be either corrupted into obedient tools, or allied with for the goal of protecting the innocent people trapped in the apocalyptic conflict, and destroying those responsible for starting it.

The international version of FRONTIER is also a bit more than just a Western release of a classic SRPG – it is, by most measures, the definitive version of the game, with significant improvements and new content added thanks to the localisation project’s Kickstarter funding. Its goal was very clearly to attract both English-speaking and Japanese players, which at the same time it makes it even more of a notable treat for the non-JP audience. High-budget games of this type very rarely appear outside of Japan, and even less often reach Steam, but the Western release involving significant improvements rather than just cuts and localisation-related glitches is borderline unheard of.

This doesn’t mean that the road onto the biggest PC distribution platform was without hurdles: the final version, released in late January 2020, had to make some concessions when it goes to suggestive content and language, deviating from the initial “all ages” version the studio created. However, the full 18+ version is, in the old-school fashion, available for Steam players through a free patch, and what’s worth pointing out, even that version gives a convenient option for opting out of all explicit content. Just by selecting the “skip extra scenes” option in the settings you can avoid h-scenes completely, making the whole game pretty approachable to players that would rather skip the porn and focus on the core story. And in my experience, even the most “compromised” Steam version is a complete-feeling and satisfying experience. But, what exactly it has on offer and can Ninetail really hope for it to get the attention of more “normie” crowds?