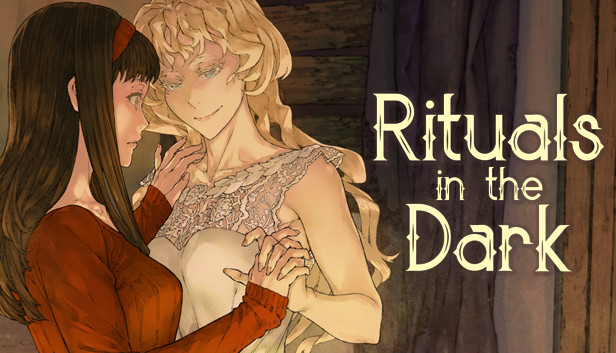 Rituals in the Dark, published on Steam November last year, is the latest yuri release by ebi-hime, one of the most highly-regarded EVN developers. Those familiar with ebi’s work probably know that her history with yuri is as long as it is unique. Most of her games add unusual spins to the formula, or at the very least showcase her distinct writing style, very introspective and painfully realistic in its portrayal of human nature. This makes even the more conventional of her w/w love stories, such as Blackberry Honey (check out my review of it here) stand out through their pacing and often uncompromisingly painful plotlines. All this is usually coupled with strong attention to quality and general writing prowess, making her EVNs some of the best on the market when it goes to literary qualities.

This newest project shares many staple elements of ebi’s style. Mixing long sections of NVL-style narration and retrospection with more typical segments of character interactions, it creates a slow-paced experience, focused a lot on the protagonist’s thoughts and feelings. At the same time, it might be one of the first cases where, in my experience, some parts of ebi’s formula felt a bit bothersome, particularly because what kind of people the major characters turned out to be. It’s also the shortest and most minimalistic commercial game ebi has released since 2017’s Sweetest Monster, in a way bridging the gap between her larger projects and the freeware games she was creating in the past. So, what are Ritual in the Dark’s main problems and do they fully spoil the compelling experience you’d expect from a VN by ebi?