I think every person in the VN community has been confronted at least a few times with a frustrating stereotype suggesting visual novels are universally filled with nothing but trite high-school romance. After all, outside of the vast seas of generic moege, there are dozens upon dozens of interesting, plot-driven titles that escape this formula. At the same time, pure love stories with only adult characters, tackling the challenges of everyday life past someone’s teenage years in a believable and relatable fashion, are surprisingly few and far between in our niche. And whenever that kind of omission is present, it’s common for certain EVN devs to try to remedy it with their work – this time, the title committing the revolutionary act of moving fluffy romance out of the classroom was The Language of Love, the latest project by ebi-hime, one of the most celebrated creators in the EVN scene.

The game, released on Steam and Itch.io on May 28th this year, centers around two troubled individuals living in a run-down apartment building near Tokyo. The protagonist, Mitsuki (a guy, despite the feminine name), is a college candidate that moved to the city in his mid-twenties. After years of being stuck in a remote village helping his family, his new circumstances let him finally chase his dreams and enter a cram school to prepare for university entrance exams. There, however, he quickly finds himself isolated and depressed, with no connection to the people around him and little faith he can make up for his long years outside the education system. The game’s sole heroine, Kyoko, is a young single mother struggling to keep afloat and provide for her temperamental 6-year-old daughter Tama. A chance meeting between the little girl and the protagonist will bring the two lonely adults together in ways they wouldn’t expect and, over time, create a bond that will prove stronger than their reservations and feelings of inadequacy.

By this point one could argue I’m spoiling things, but the general structure of The Language of Love and its romance plot holds no major surprises – in the first fifteen minutes you’ll already know who the main actors are and what kind of conclusion you’re likely to get (and as it’s a kinetic novel, there is indeed no way to screw anything up). Its novelty is connected mostly to the “unusual” age and circumstances of the main couple, far detached from the typical visual novel fantasy. It’s a celebration of awkward, imperfect romance, featuring two individuals that struggle to make a place for themselves in society, but manage to find support and new meaning in life thanks to their relationship. It’s a setting and message that should be way more relatable and meaningful to ageing VN fans like me than another teenage drama. But did ebi-hime really manage to make such a mundane, predictable plot entertaining and compelling to read? 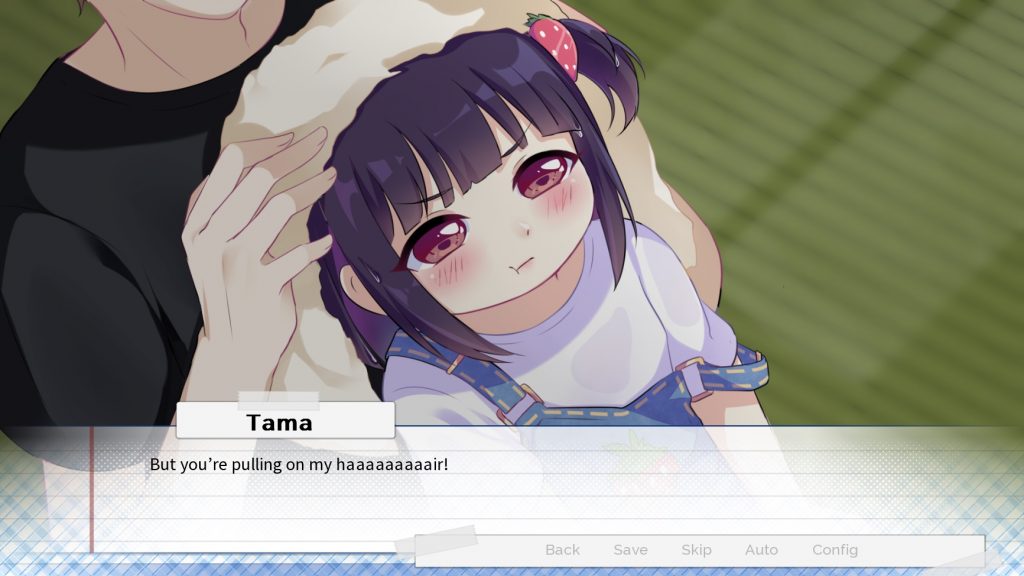 The idea I’d be charmed by a story with so many scenes focusing on the protagonist acting as a surrogate father for the heroine’s daughter was rather alien to me just a few weeks ago, but it took less than half an hour for The Language of Love to prove me wrong

To not draw things out needlessly, I’ll say it right now: The Language of Love is a charming and compelling experience, definitely among the best short romance VNs I’ve read to date. The setup feels like a breath of fresh air in a medium that apparently can’t escape anime clichés no matter where it’s produced, but ultimately it’s the characters and excellent slice-of-life content that really makes it work. Interestingly enough, a major part of the story is dedicated to interactions not between the main couple, but between Mitsuki and Tama, especially in the first half of the game. The protagonist meets her while walking back from cram school, crying alone on a playground with no other adult in sight, but the already-lengthy interactions that happen there are only the beginning. Later on, as Mitsuki agrees to take care of Tama so Kyoko can take extra shifts at work,  the two pretty much spend more time with each other than with the overworked heroine. The game’s content reflects that, not being afraid to put Kyoko on the sidelines and show in detail the parent/child-like bond that grows between the protagonist and the young girl.

Tama’s character is also a major source of humour and witty dialogue. The stubborn, hyperactive and sometimes plain bratty girl could easily be annoying if not for Mitsuki’s uncanny ability to counter her temper tantrums with patience, clever tricks, and maybe most importantly, good cooking (which the girl loudly proclaims as much better than her mother’s, to Kyoko’s predictable despair). Their interactions are not only extremely well-written and amusing, but also showcase the best parts of the protagonist’s personality after an introduction that mostly shows his depressed brooding and self-pity (a somewhat typical opening for ebi’s work, especially with male leads). Only after the bond between Mitsuki and Tama is established does Kyoko start opening up to him in a way that makes the romance plot seriously progress: the two relationships are just as intertwined as they would be in real life, showing how much thought and consideration the story’s main theme was treated with. The overall tone of the game is rather light-hearted and humorous, but at the same time extremely grounded and believable. Also, the focus on Tama as a crucial factor in Kyoko’s and Mitsuki’s relationship and her near-constant presence give some anime clichés, like the beach and hot springs sequences present in the second half of the game, a whole new context and dynamic. Before the characters even fully accept their new situation, they start to act as a patchwork family and make each other’s lives better. While technically detracting from the romance, the inclusion of the daughter character ultimately makes it much more meaningful. 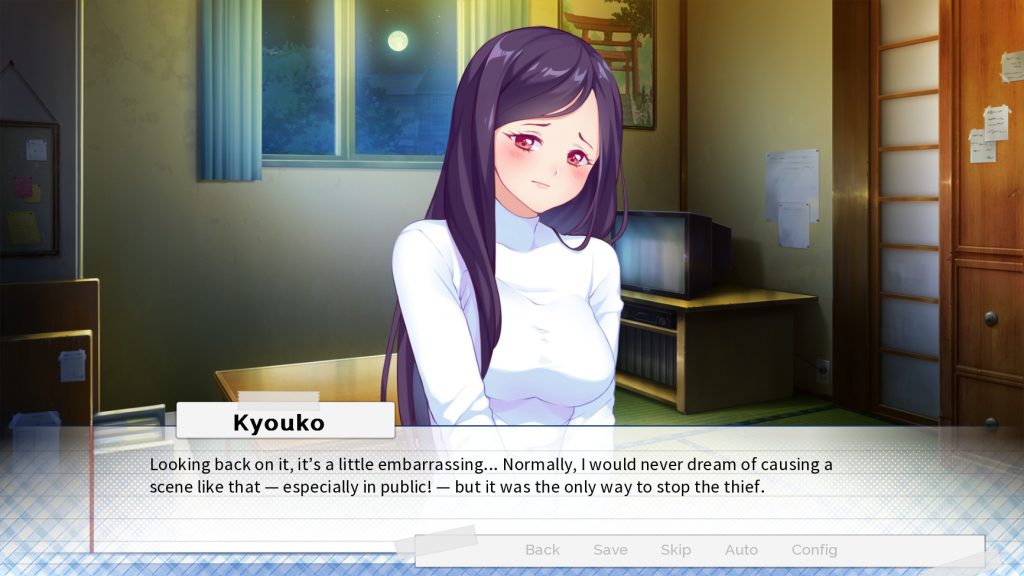 Kyoko’s sprite design is possibly the least fortunate part of the whole package – if she always looked as good as she does in her CGs, I’d have a hard time finding anything to seriously complain about in this VN

When it comes to visual quality, I have just one serious complaint: Kyoko’s sprite. While her design is simple and elegant, fitting her mature and humble personality while still being quite attractive, the facial features and proportions on her sprite simply feel off. This contrasts with how good she looks in her CGs (drawn by another artist), which generally manage to be very consistent with the rest of the art when it comes to style and character design, but don’t have this one problem. It’s just a shame we’re stuck with the lesser version of the heroine for most of the story. Other than that, The Language of Love’s art is all-around very solid, even if not especially flashy or highly detailed – one could even argue it’s toned down in the same way the story is in relation to typical 18+ VN romance, focusing a lot on the characters and their everyday, humble surroundings. 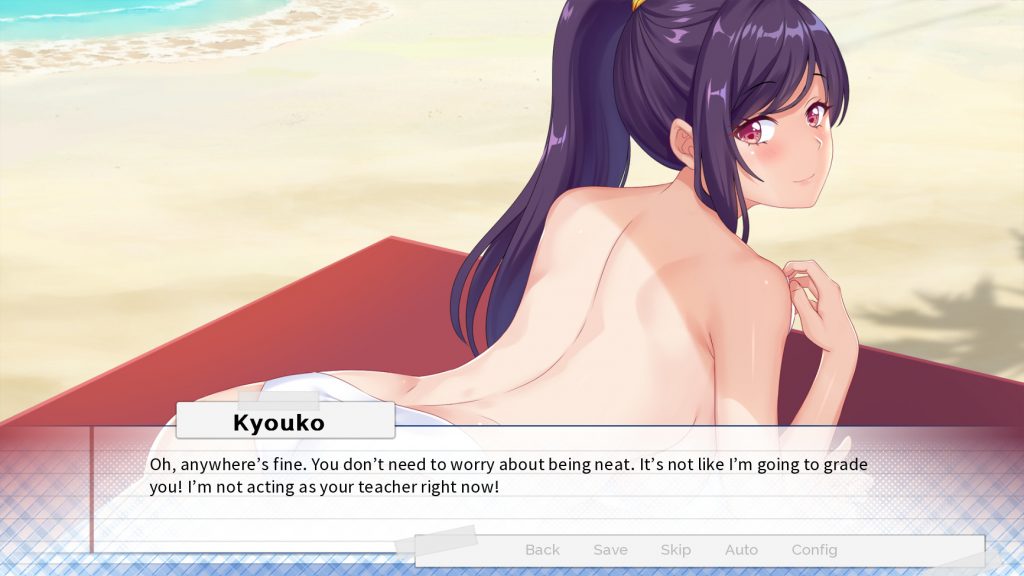 The subtle sexiness of the game differentiates it strongly from usual 18+ VNs – this applies even to its single h-scene, full of awkward moments and dialogue that feels meaningful and true to the characters

The Language of Love’s soundtrack, on the other hand, stands out quite a lot. Created by ebi-hime’s long-time collaborator Yuzuki it features an energetic theme song and a number of mostly cheerful instrumental tracks. Matching the game’s setting, all the compositions are distinctly Japanese in feel, and I imagine some might find them somewhat overbearing. The Japanese lyrics in the main menu caught me by surprise and it took me a little while to get past the culture shock. The background music is much easier to get used to and works especially well in the humorous sections of the game centered around Tama – again, nothing particularly brilliant, but it serves its purpose. There’s also one interesting touch that is kind of pointless, but still worth mentioning: the daily messages from Kyoko, accessible from the game’s extras menu. According to ebi herself, there’s a unique short note there for every day of the year, adding around 8000 words to the main 80k word script. That kind of dedication to a minor gimmick is something I find strangely admirable.

In summary, The Language of Love is a very unassuming and borderline-minimalistic game that still managed to utterly impress me with its storytelling and message. While many romance VNs let you escape to bizarre fantasy worlds, this one, like much of ebi-hime’s work, offers a love story that is deeply, often even painfully, realistic. And exactly because of how easy it is to imagine this story playing out in reality, how relatably troubled and flawed its main actors are, it gets under your skin and feels both touching and uplifting. Ebi’s efforts as a writer seem focused on exploring both the admirable and the disturbing parts of human nature, rather than creating elaborate fictional worlds or epic mystery plots, and I think this VN, despite how simple it is, is one of her most compelling works to date. And while it showcases the darker side of humanity clearly enough, it also makes you want to believe that kindness, friendship and love can find you, even in the harshest of circumstances. With so many stories having love plastered all over them, those that treat it with real care and understanding are particularly worth appreciating – and, in my eyes, this is exactly what The Language of Love does.

Pick up The Language of Love on Steam or Itch.io | VNDB

A review copy was provided to me personally by Marantana, author of The Language of Love’s German translation. For more EVN reviews check out my personal blog, EVN Chronicles. Follow me on Twitter to be notified about my posts on Fuwanovel and beyond.