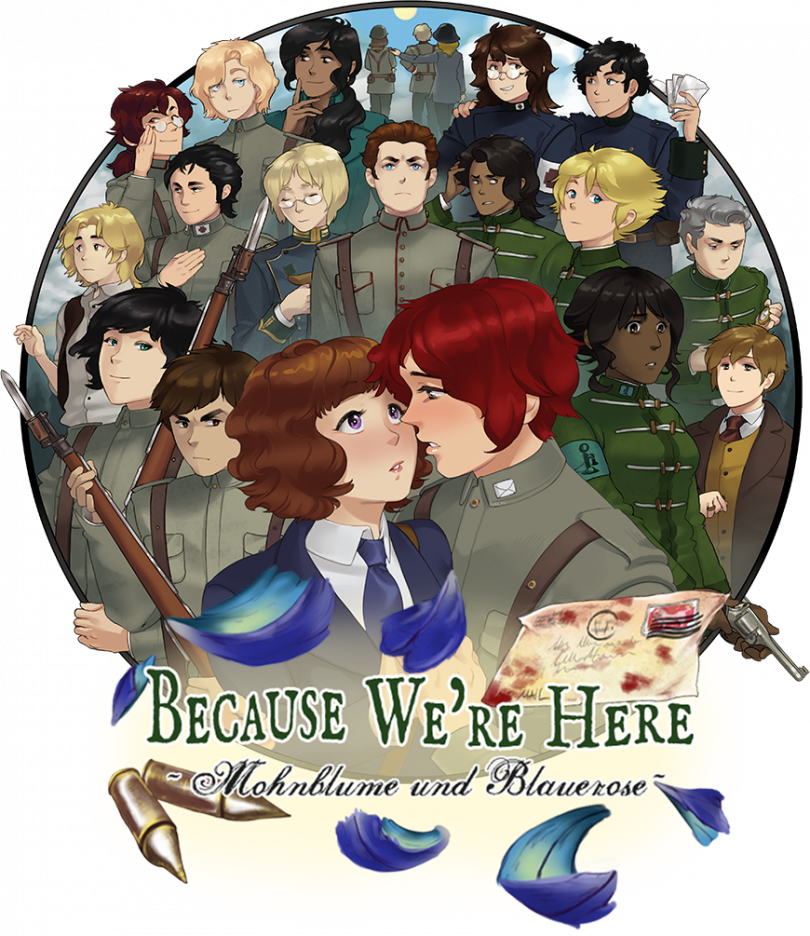 I won’t be the first person to tell you, nor will I be the last person to tell you, that war is hell. We all have our own visions of what war is, but only those who have lived and breathed war can truly understand just how accurate “war is hell” is. I’m a military brat from a long line of military brats, and if I hadn’t screwed up my leg to the point where I couldn’t get through Basic if I tried, I would likely be on the front lines somewhere in the world, but I’ve heard plenty of stories of living in the trenches, of seeing death right in front of you—the trials, the tribulations, the pain, the uncertainty.

That all said, whenever I read a story that revolves around war, I tend to have a much more critical eye for what a story attempts to pass for war, and in the case of Studio Elfriede’s “Because We’re Here ~Monhblume und Blauerose~”, we get a short glimpse of the realities of trench warfare both on the front lines and at home during the World War I era. I will state that I played an alpha-stage demo of this title a long time ago, and there are improvements to the overall feel of the game that I will touch on, but for this three-hour ride that serves as the first act for the larger story, I was left wanting more. And unfortunately, that’s not a good thing. 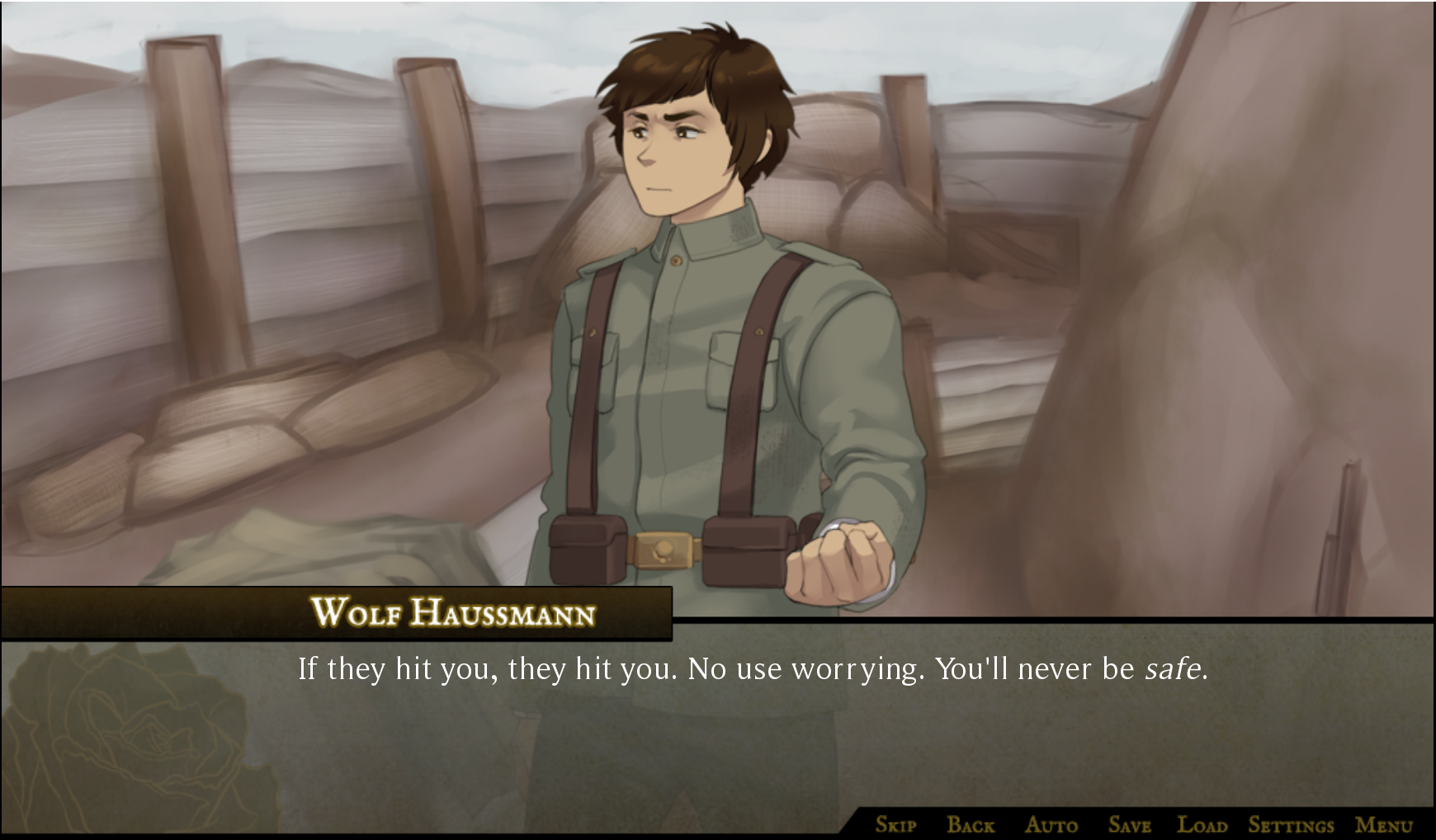 No… I’ll be fine. My last will says to delete my browser history.

The story begins in a small town called Boschberg in the country of Wessling on the continent known as Lassalle. Wessling is considered the most technologically-superior country on the continent, whereas the other powerhouse, Leyland, is much more progressive in their ways. Obviously, these sorts of situations lead to arguments, and arguments between countries escalate to involving people and guns and killing. This argument happens to be over the annexation of land from a small country that divides the two: Levasseur. Levasseur forms an alliance with Leyland, and war breaks out as a result.

You play as the company’s titular character, Elfriede Rauss, a postwoman for the town. At the beginning of the story, all able-bodied men are being asked to enlist to fight on the front lines. For many, this is a sign of honor to be able to fight for their country. There are, of course, conscientious objectors and those who want to fight but are unable, as well as women who are not allowed to enlist and instead fight on the home front to ensure the continued success of the country. Standard stuff so far.

Following this, you are introduced to a bevy of characters in quick succession (nearly a dozen!), many of whom you’ve never spoken to previously—an oddity, considering Elfriede’s position in the town, but I’ll overlook it. What I can’t overlook is the fact that, this title introduces ELEVEN romanceable characters, and with a three-hour playtime, that is a very hard pill to swallow. Anyway, all these characters have varying attitudes toward the war, but nearly all of them have one thing in common: they’ve enlisted, and they’re going to fight. Whether or not they understand what that really means is an entirely different story.

If you’re going to the front lines, wouldn’t this be a bit of a problem?

Unfortunately, these character introductions introduce the two biggest flaws of the title: the concept of quantity over quality, and the overuse of obvious tropes. The latter is somewhat common in otome games, so I’m used to seeing that. Some of the tropes are incredibly well-thought out—the three that come to mind are Wolf, Helmut, and Marius (who will remind you of a particular character in the movie Hacksaw Ridge)—while others are simply there to fulfill the role of, ahem, cannon fodder. Was that too soon?

There are, however, several redeeming factors to the title, and these all stem from Elfriede herself. As the player, we get to hear many of her internal ramblings, and there is a ton of personality written into her. This is especially so when we get into the story’s strongest feature: the Battle of Wits. For anybody who has played the Miles Edgeworth Investigations games, you’re going to feel right at home here. The Battle of Wits is exactly what it sounds like. Your goal is to talk down your “opponent” and get them to acquiesce, but that is not the easiest thing in the world. I hope to see these battles occur more often in the future acts, as these require that you pay close attention to particular events the game. This minigame gave me the most immersion, and I enjoyed this aspect of the story. 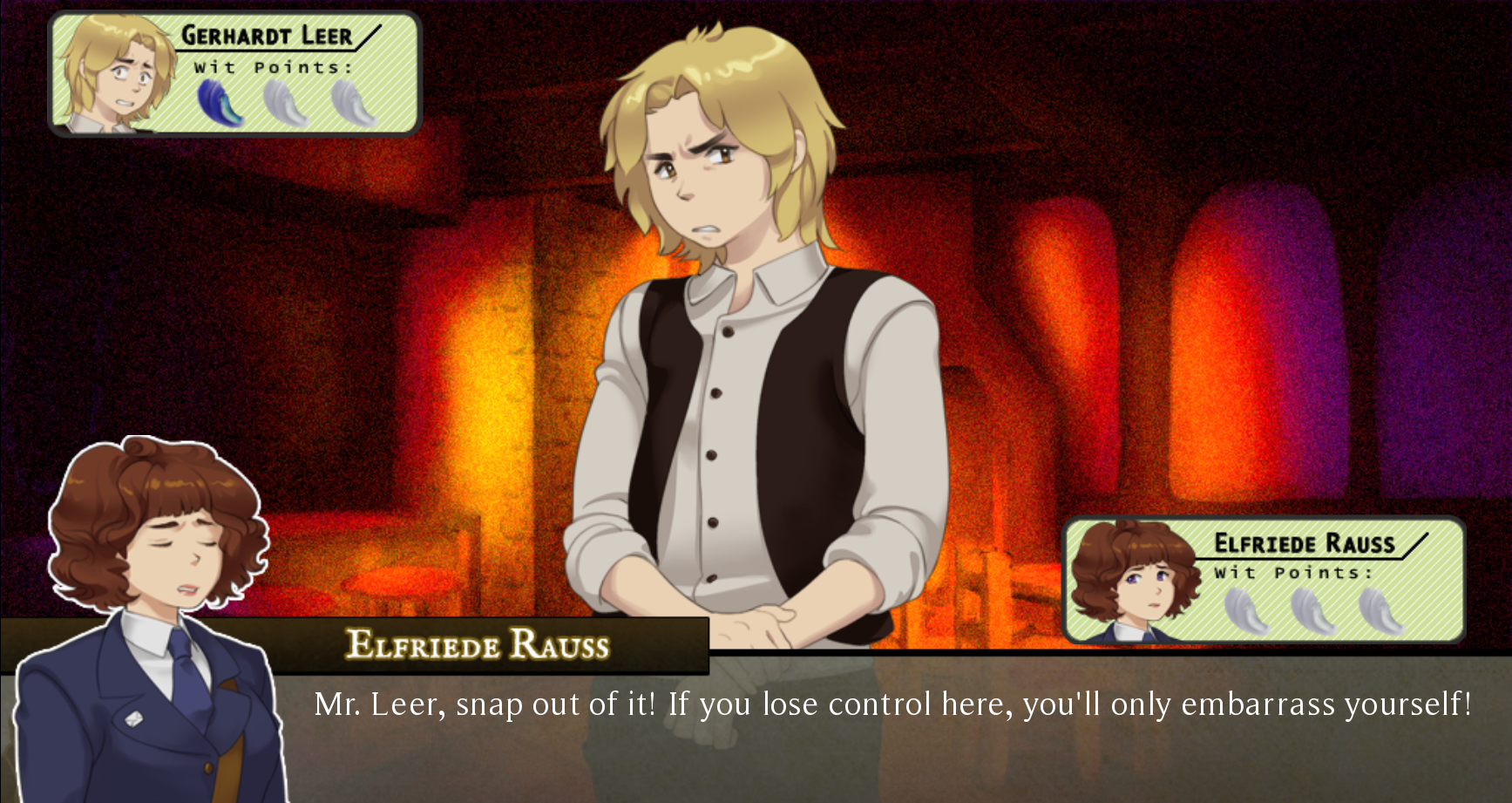 Beyond this, the game uses a combination of classical music and upbeat “tavern” tunes. However, I felt some of these tracks did not fit the situations they were being used in, and at one point I actually turned off the music for a bit because it was grating on my ears. There were also some sound effects that felt really out of place—the “victory” sound when you complete a Battle of Wits felt very much out of place. Additionally, I hope that future acts will get a more thorough QA pass. There are a number of minor UI issues and typographical inconsistencies littered throughout the story, especially in the beginning, that detracted from my experience. (Editor’s Note: As of August 6th, 2018, a patch was released that fixed many of these issues.)

I enjoyed the art in this piece. Even though there is an assortment of characters, I can’t say I noticed any “same-face syndrome” going on, with the exception of side characters that don’t play any role and didn’t even have faces. It’s simple and lacks detail, but that’s what war is. You’re not going to decorate every sandbag with smiley faces and cave drawings: this is exactly what I expected it to be.

Because I don’t want to spoil much of the story beyond what you read in the first twenty or so minutes, I will say that this first chapter of a hopefully much-larger story introduces some very interesting concepts of life during war, and I hope that the future chapters will run with these concepts and really make me want to root for Elfriede, but as it stands, I just wish there was much more to the story. Here’s hoping that Act 2 can live up to those expectations.

Finally, a word of advice, when you pick this piece up, fail a Battle of Wits and decline everything. Trust me on this.

This review was written using a review key provided by Studio Elfriede.

+ Elfriede. Simple as that.

+ Battle of Wits is incredible and needs to be a bigger part of the story.

- Went too far into the "quantity, not quality" camp.

- Music is overbearing at particular stages of the story.

- Many characters fall into often-used tropes.