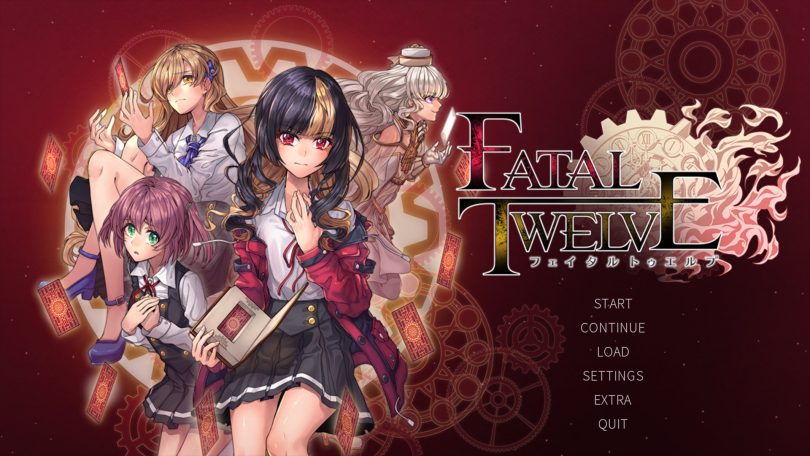 Have you ever considered if your life may be bound by fate? Does it ever feel like at times all things you do are inevitable and lead down the same path? Would you consider yourself an agent of free-will, or do you resign yourself to the fact that every choice you make is predetermined? These are the kinds of questions people ask themselves as we live out our lives. You’re probably wondering, why we are discussing such a philosophical question? Well, because we can, but mostly due to this visual novel we’ll be taking a look at today. Fatal Twelve is a new visual novel that was funded on Kickstarter and then released on March 30, 2018. The game is published by aiueo Kompany and Sekai Project.

At first, I was told this game was a yuri visual novel and that was all I was given to go on. To be perfectly honest, this is my first ever true yuri VN. However, I can preface it by stating I never really had any strong feelings for or against them. I guess it was just never really within my scope of visual novels to read. (I’m sure Zaka would chide me for this.) 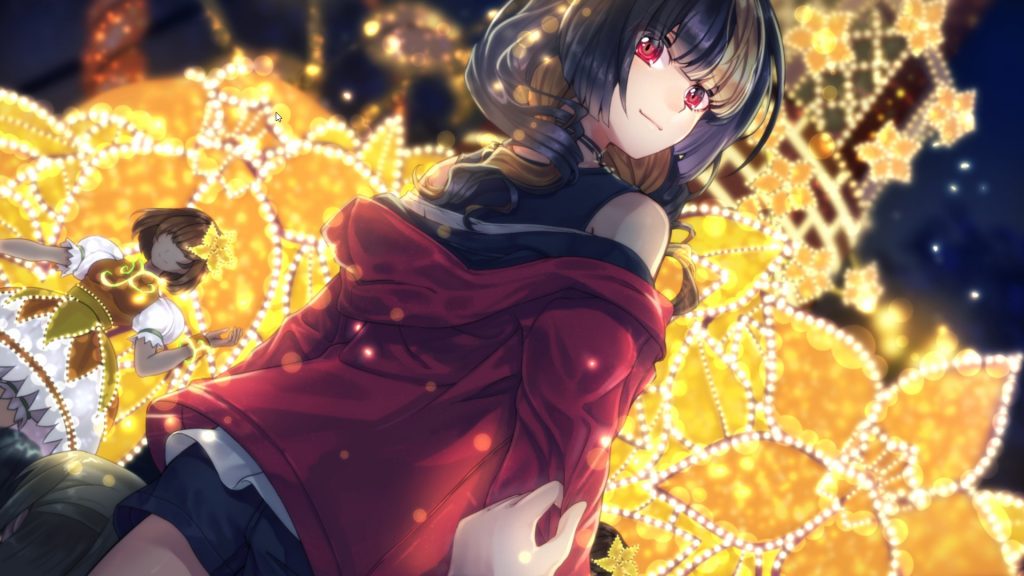 Fatal Twelve centers around Rinka Shishimai, an ordinary schoolgirl who gets caught up in a major accident leading to her death. The story does not end here, obviously, but instead her death becomes the whole premise of the plot. From here, the story starts diving into the deeper philosophical question hinted at earlier in the review. Rinka experiences her untimely death but later wakes up and finds herself at home — The Lion House — with her friends. The Lion House is a small café run by her grandmother, which also happens to be her home as well. She then goes about her daily routine but soon learns she is one of twelve people caught up in something known as the “Divine Selection.”

To put it simply, “Divine Selection” is a death game where the winner gets to continue living their life. All twelve participants have already died in a different timeline, but this gives them a second opportunity at life. A Goddess known as Parca oversees the events and gives them a basic rundown of the situation. Each participant is assigned a number and has been given a magical book. Inside the book is a slot for cards. These cards represent three things: the name of a participant, their cause of death, and their regret. These cards are handed out at random and each player starts with three cards each of which indicates a numbered participant. In order to eliminate another player, one must collect all three cards of another member of the twelve and elect them during the “Divine Selection.” Each election is held on a weekly basis and the whole process lasts for 12 weeks. 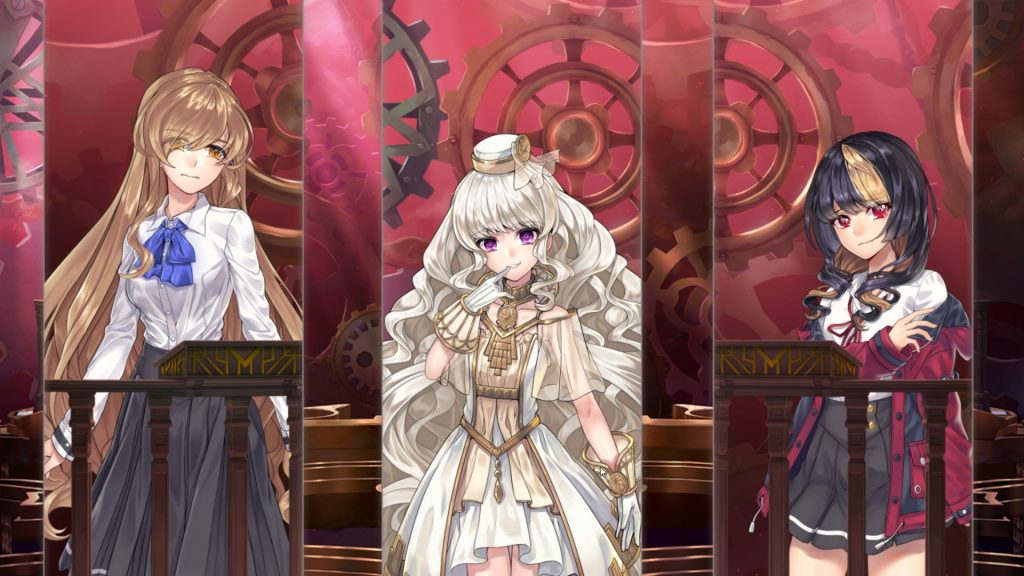 The first thing that jumps out when you start Fatal Twelve is the art style. Unlike most VNs, this isn’t your typical moeblob. If anything, the style is closer to that of Western comics. Now, this in itself might be a turn-off for some. On the other hand, utilizing such an art style actually sets a more serious tone and arguably helps paint a better backdrop for the story. The backgrounds overall give a good representation of each area and are almost photo-realistic. Such examples include the train/JR station, Tokyo Tower, and other landmarks. This art also extends to the character sprites and the CGs where the more mature art style paints a grimmer picture at times. Unfortunately, there is very little variance when it comes to character sprites and backgrounds.

Soundscape is another important part of any visual novel. The choice usage of BGMs was surprisingly good and led to a more immersive experience. Ranging from happy slice of life music to more intense action music, where you could feel the desperation—it all fit really well with the story. On top of the excellent work in soundscape building, the cast for the voices are also very fitting. None of the voices really feel out of place and brings forward the internal and external struggles of each character. This includes our protagonist who is also voiced. They do a bang-up job in representing almost every emotion. One of the few flaws in the VN is a bug that has been widely reported. Some lines are playing at the wrong time, and others are just not playing at all. From the looks of things, a fix should be on the way as the developers are aware of the issue. 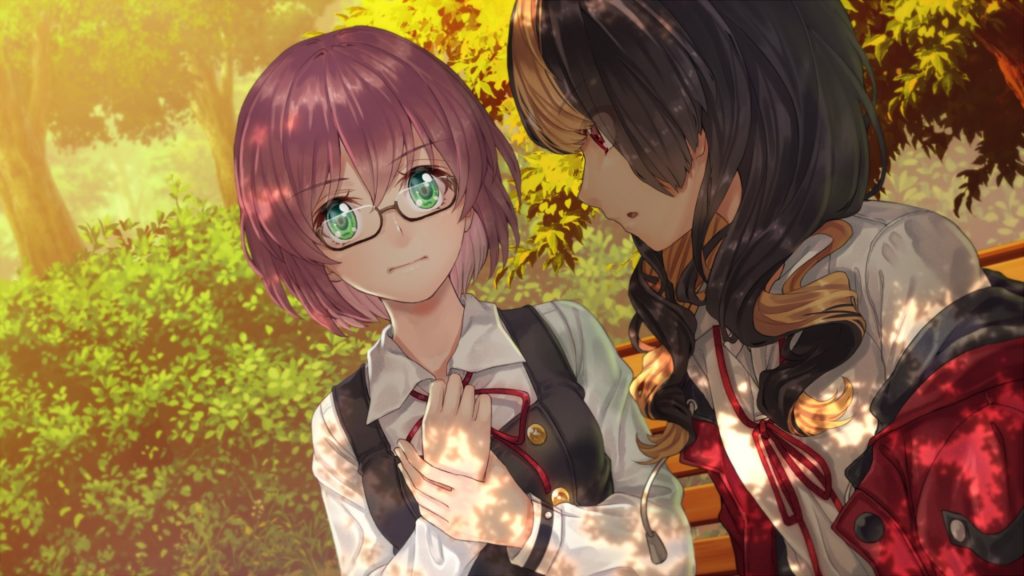 Finally, when it comes to story, Fatal Twelve holds its own. To be honest, I was not expecting much from this visual novel considering the yuri setting. However, the story went and exceeded my expectations. At each twist and turn, I was learning more about the world and each of the characters. The translation is by no means perfect, or at least the editing isn’t. There are parts which are easy to read and follow, but then there are some sections that are riddled with grammatical errors, making it more difficult to follow. Alas, one of the biggest problems with translations. Even so, the overall plot is good enough to keep the reader interested and may even throw some for a loop. Fatal Twelve clocked in at approximately 15 hours and felt just the right length. Some parts may seem drawn-out, but the pace quickly picks up.

Getting back to the topic of “Divine Selection,” the participants are called “Slaves to fate” by Parca, the goddess. As each one of them is eliminated, their fates return to what it was meant to be. Needless to say, each of the characters has their own motivation and regret. With each passing election with more players being eliminated, Rinka grows in a variety of different ways. It is hard to place it into words without going too deep into spoilers, but let’s just say Rinka not only changes herself but heavily affects those around her. 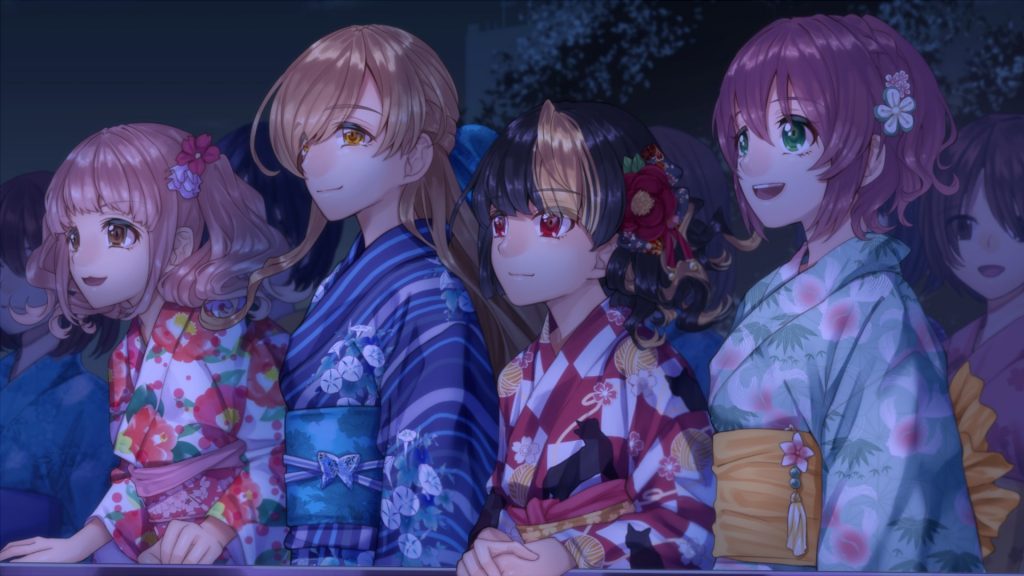 Other important characters include her second-year friends and classmates Mao Oguma and Miharu Mishima. She also has a first-year friend in Naomi Hitsuji. The relationship between these four girls is one of the focal points in the story. I mean, I know it is a yuri VN, but there are aspects to it which goes beyond just love. If anything, these characters and the other participants quickly become an attractive part of the overall visual novel. The interactions between the characters feel natural and really build into the setting. Oddly, there are sections where you start taking on the role of other characters. Sadly, this is one of the weaker sections of the visual novel as there are times where it seems to just jump into another character. Sure, it gives a bit more insight into each of these characters, but some parts just seem unnecessary or random in placement.

Overall, I would say Fatal Twelve is an enjoyable visual novel. As aforementioned, I would not consider myself a fan of yuri visual novels and really came into this with no expectations. I would say Fatal Twelve managed to exceed my initial expectations. The character interactions and the setting really managed to resonate even though there were weaker aspects in parts of the storytelling process. The art style and soundscape, as well as the BGM, were a very welcome addition that helped set the tone of the story. If not for it looking and sounding the way it did, it wouldn’t have given off the same feeling. If you are a fan of suspenseful VNs this is surely a worthy read. So to answer, I guess you’ll have to read Fatal Twelve to see how bounded by fate you truly are. Heck, who knows, you might even enjoy it as much as I did.

Pick up your copy of Fatal Twelve here | VNDB

+ Engaging storyline with a good variety of meaningful endings.

- Voice lines do not always play when they should.

- POV switching seems random and out of place at times.