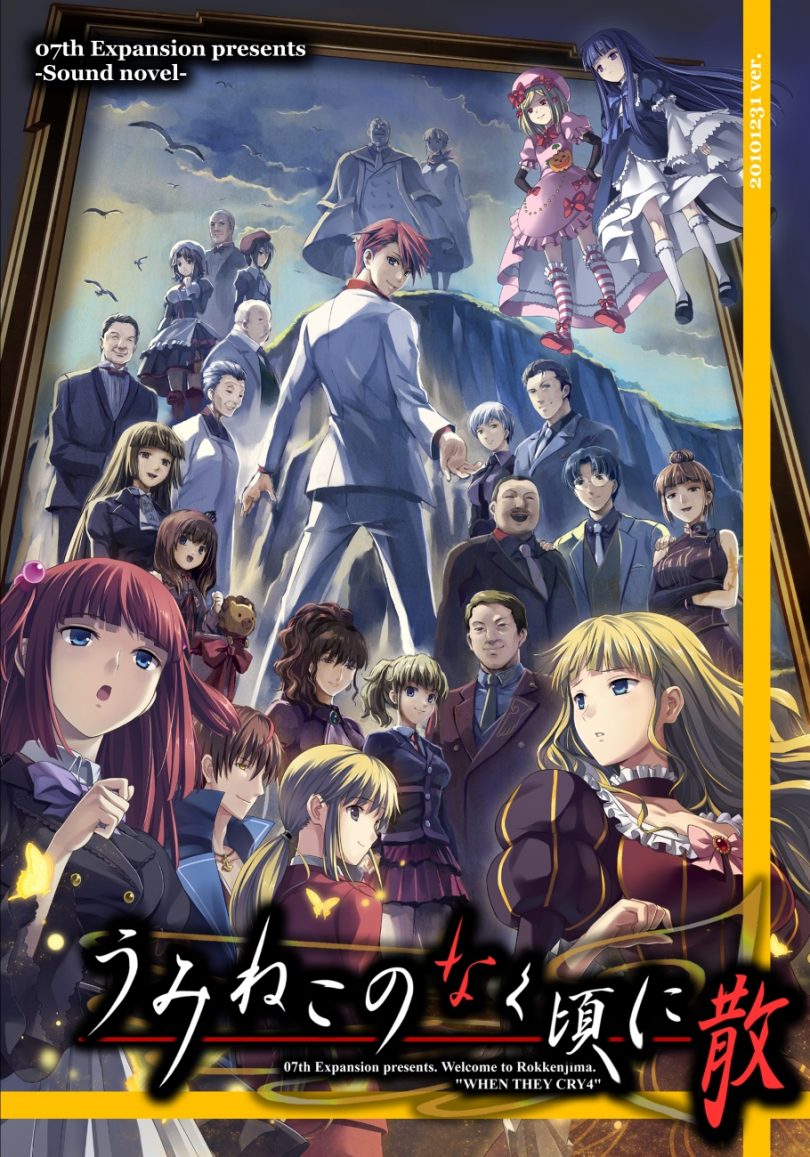 Here it is. 7th Expansion’s long awaited sequel to the question arcs of Umineko, finally officially translated by Mangagamer just last month, allowing us at last to dig into the rest of the Rokkenjima mystery, pick up all the new clues, and find out once and for all who’s the murderer behind this eight-chapter-long monstrosity of a series Ryukishi spent 4 years writing. 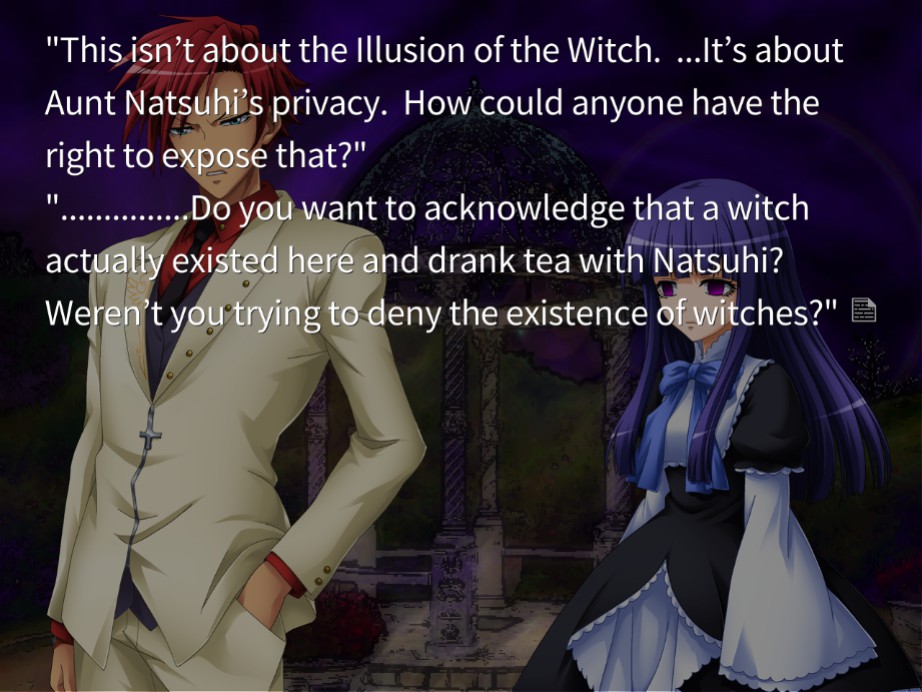 …Well, kind of. You see, while the answer arcs will eventually actually answer the question of who’s the Rokkenjima murderer (though the accuracy of the answer you’re given is somewhat debated as you’ll see by the 9 hour long youtube fan videos about how the official explanation couldn’t be a thing), it’s actually quite deceptive to separate Umineko’s two halfs in “Question” and “Answer” arcs in the first place. A much more accurate name for them would be the “Question” and “The more meta one that makes you feel bad for wanting to know the answer” arcs. Doesn’t sound quite as catchy, though.

One phrase every Umineko reader is probably tired of listening to at this point is “without love it cannot be seen,” and oh boy, is the whole love thing stronger than ever here.  After the grand climax of the previous story and a lot of incredibly big questions left unanswered, the answer arcs are more than happy to set  all of that aside and start a new game, one that poses a series of new questions that take center stage and act as the main force wrapping up this story and its many confusing but charming themes.

If you liked Umineko for its mystery puzzles, the game isn’t completely devoid of them—the best parts of it are in this game, but they are relatively bite-sized and really act as just a little spice to what the story has become. This could potentially turn you off. At the same time, however, if you liked Umineko for its character development and drama, this will probably feel just right for you, with the meta and thematics also being a big driving force for making so many people incredibly fond of this VN. 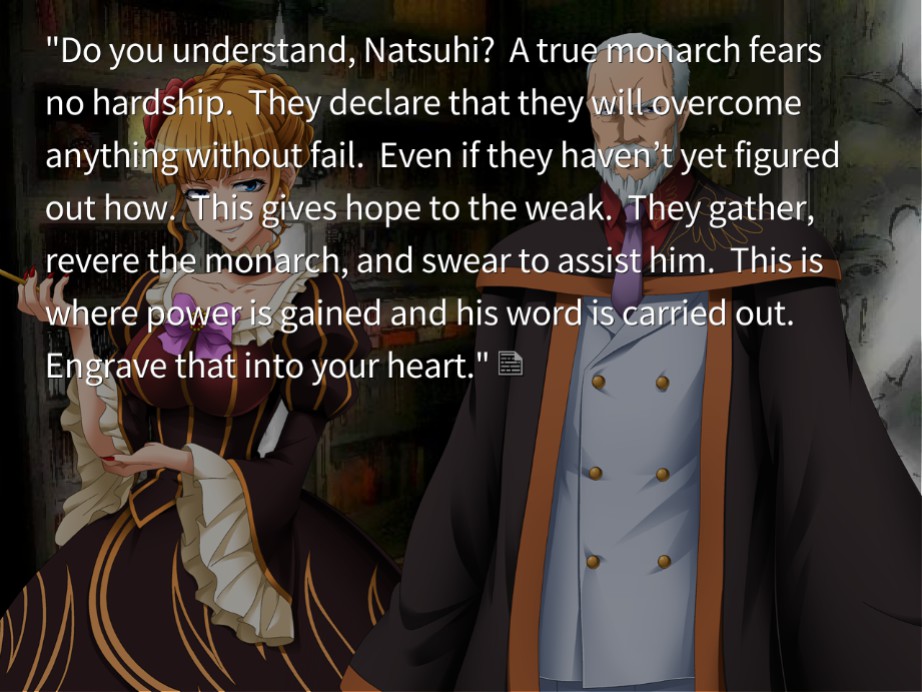 Now, this is still Umineko. The soundtrack is still amazing, Ryukishi still sucks at describing scenarios or making action sequences, the characters are all still compelling and charismatic, the game still has pacing issues and the pure mystery elements of the story are still lackluster in general. The core is all there, it’s just surrounded by mystery tropes manifesting themselves as laser swords and candy being capable of destroying universes now, not that the first Umineko really lacked metaphysical magical battles in the first place. If you do, however, think it did, I’m happy from the bottom of my heart for the roller coaster of those you’ll see here.

Ultimately, it’s a good thing the series waits so long to throw you into the thick of its meta narrative, as it would be very hard to hold the reader’s interest if Umineko was this batshit from the start. It can, and has, come across as genius to many of its fans who had the patience and investment in that narrative to begin with thanks to its loveable cast, but because they both need to setup that gigantic cast of characters and to keep its thematic undercurrent progressing in all chapters at almost all times, the game will beat you over the head with the same questions of truth, love, and everything else it touches. Constantly. Agonizingly so. This repetition is most definitely a flaw of the story, but one that is hard to fault too badly as the finale might have felt like an asspull if they hadn’t emphasized it as much. Of course, in an ideal world, this game would have enough themes to justify the time it spends commenting on them, and but making Umineko deeper wouldn’t really improve any of its core strengths anyway, as this is a story about its characters with a mildly interesting meta narrative pull, though it would make being snobbish about this game a lot easier (not that it stops some people from being that anyway), and who wouldn’t like that? 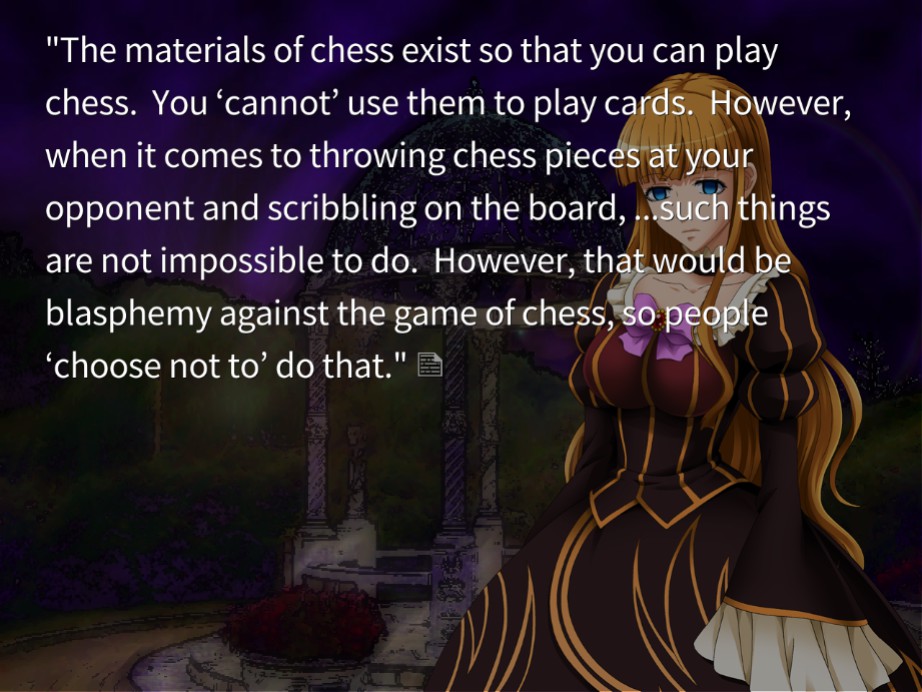 So, should you read Umineko’s Answer Arcs? Well, it depends. Should you start Umineko for the sweet mind-blowing meta later in the story? If you want to, but you’d probably be disappointed by it. Should you check the series out if you want a solid story that’s not completely shallow or thematically broken but is still largely about liking its characters? Yes, definitely so.

- Repetitive with its themes