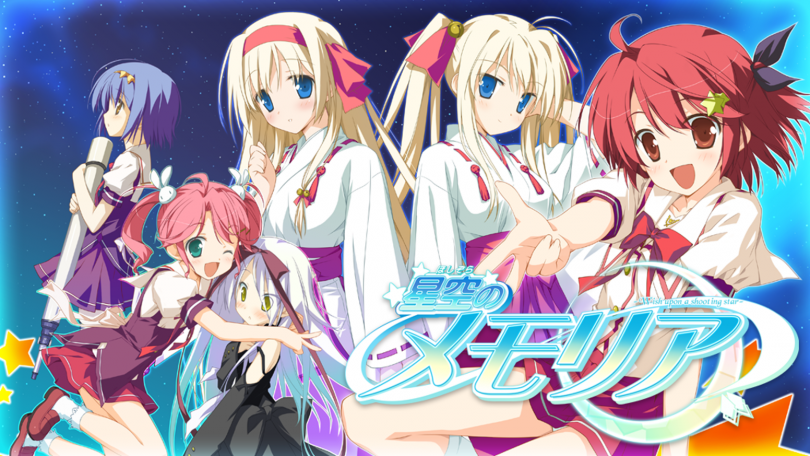 Hoshizora no Memoria is one of a few very recent releases from Sekai Project and Denpasoft. Telling the story of a guy who returns to his old hometown after his mother passes away, it centers on his daily life: going to high school in a little country town; joining the school astronomy club; getting a part time job; hanging out with a little grim reaper girl. The first part probably all sounds pretty familiar, and the last part may sound a little bit interesting. That would be about as far as I could go on positives for HoshiMemo’s outline, though: some small parts of it are maybe a little bit interesting.

Before I go any further, let me clarify one thing about this release of HoshiMemo: by all accounts, the official HoshiMemo localization is much better than the old fan translation, and though I never played the fan TL, from what I’ve seen in comparison screenshots, I agree. However, it turns out that translation quality is a very long sliding scale. When you’re competing against absolute trash, you can still be terrible and yet come out ahead. And friends, that’s exactly what this HoshiMemo release is: terrible. 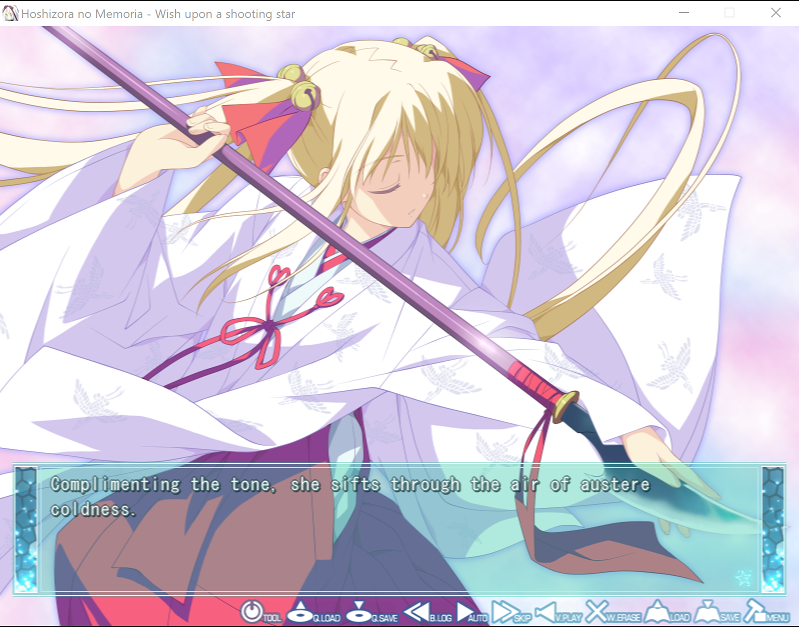 So, let’s talk details about why I hated HoshiMemo. Mostly it comes down to the writing, both in the localization and in the original. The localization tends to fail in the little details, whereas the bigger picture failures are, unsurprisingly, mostly on the original. The game is, first and foremost, unspeakably generic: its only unifying theme across all routes is “stars,” and while the last couple routes latch onto the notion of “cruel kindness,” this is pretty much the opposite of a novel topic, nor does the game really have anything interesting to say about it. Most of the routes are some combination of boring, frustrating, and squicky. Komomo’s route, and to a lesser extent Kosame’s, were about the only routes with some actual, external conflict: the rest revolved around misunderstandings and unrelatable, unbelievable stubborn stupidity. There’s just nothing here to grab onto, nothing you can really take back from the story to think on. 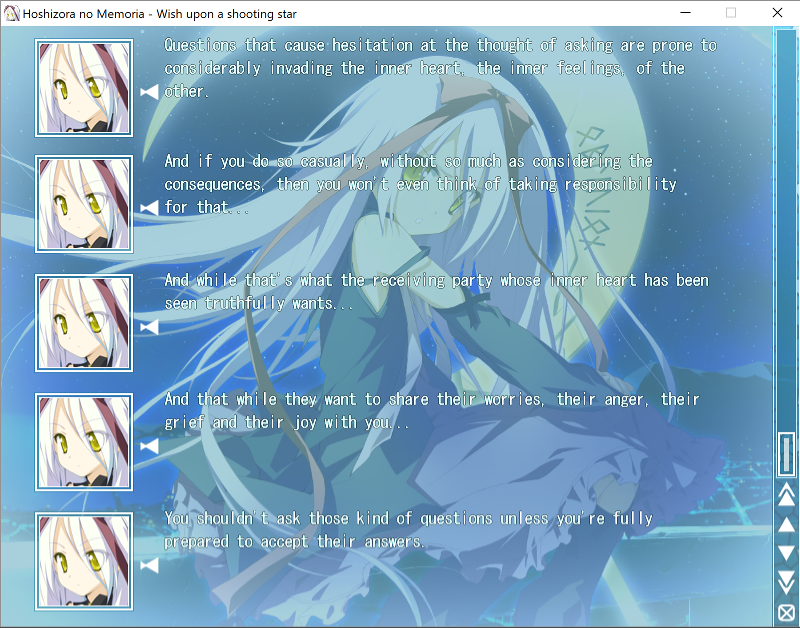 At a plot level, almost nothing happens in any of the routes, and what little does happen is so predictable as to render it boring. All the twists can be seen a mile away, and yet you still have to ride alongside the idiot protagonist who’s perpetually a dozen steps behind you. Here’s a comparison: this game has a less substantial plot than Boob Wars 2. Think about that.

Going a layer below plot and themes, the script is just a failure at dramatic structure: it doesn’t even understand how to properly build and maintain tension. In two separate routes (Chinami’s and the secret heroine’s), about 90% of the way through the route, right before the climax, the game decides for no reason to spend a solid ten minutes infodumping. In Chinami’s route, one character tells his entire life story to a companion, a character who was actually with him for almost the entirety of the story he tells her. Why’s he telling her all that? Well, because you, the reader, maybe want to know, and the writers couldn’t find a way to reveal it as part of the plot, so instead we all get to watch a completely inexplicable monologue. It’s up there on the list of laziest things I’ve ever seen in VN writing. Not content with that, near the end of the secret heroine’s route, the writers apparently felt the need to go on a ten minute-long pseudo-scientific explanation of how the “magic” in the story works, which is both unnecessary and a total mood-killer during an attempt at an emotional scene with a character at death’s door. What the hell were they thinking? 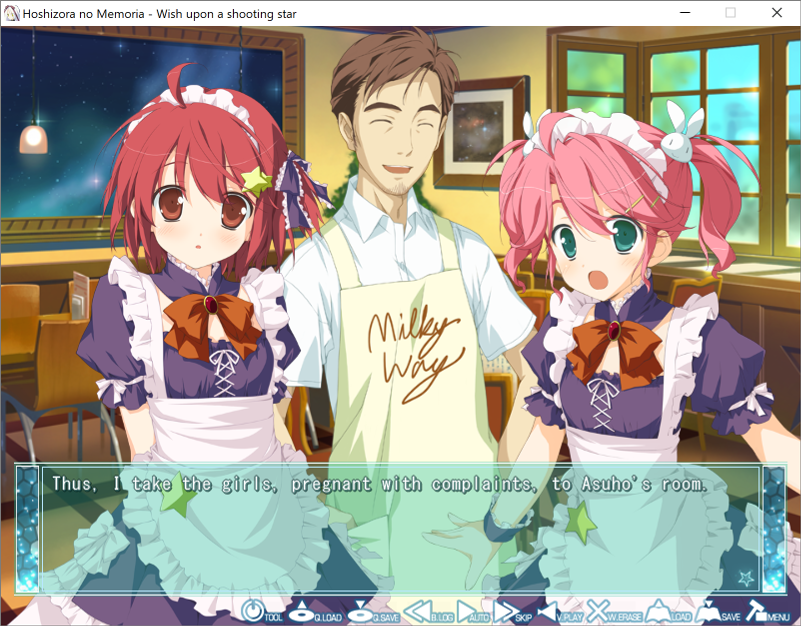 Before moving on to the localization, I want to touch on characters, too. Frankly, most of them were either boring or outright unlikeable. The only characters I really enjoyed were Komomo and Chinami (the latter of whom is almost universally hated, amusingly enough). Komomo does the typical tsundere thing, but she pulls it off far better than most, and she gets a lot of points from me for being smart and capable. Chinami, on the other hand, is a little ball of energy who’s head-over-heels for the protagonist, and either you love that or you hate it; it works for me. The rest, well… Asuho is likeable but bland; Kosame and the secret heroine are so boring that I hardly even remember they exist unless they’re on stage; and Aoi is just vile. If you play VNs for the girls, you can hardly do worse than HoshiMemo. 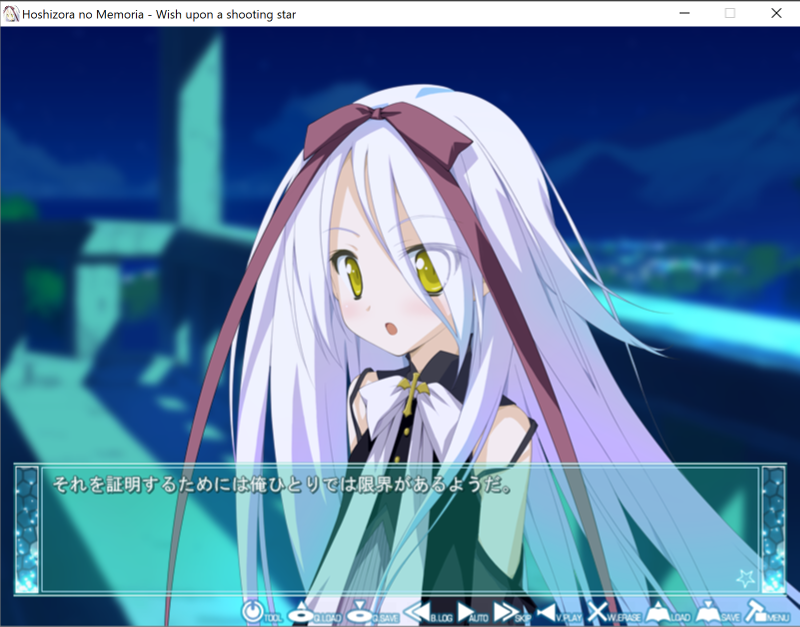 The original script was written by a professional. The original script doesn’t sound like garbage (I know; I checked some of the nonsense English lines and found perfectly rational Japanese). I’m not setting the bar crazy high here: plenty of past releases have basically met my expectations (just see my last three reviews). This one did not.

And it matters because the poor localization undercuts every ounce of emotion the script might have had. It’s also a contributor to my dislike of the characters. You can clearly see attempts at giving each of the characters a distinctive voice, but such attempts are inevitably sabotaged by lines with bizarre sentence construction or strange vocabulary. None of the characters ultimately sounds like an actual human being, or even a caricature of a human being. They all just sound alien.

Now, that said, not all the routes are quite as bad as the worst the game has to offer. For whatever reason (I’d bet on a different translator), Kosame’s route is kind of okay. Hardly any of its lines were hit with the ugly stick. Aoi’s route is hit-and-miss; it’s bad most of the time, but parts of it are okay. And that leaves the entire rest of the script. Some 85% of the localization is a constant string of disasters, the sort of thing I only expect from a bad fan translation in the hands of non-native English speakers.

Writing is the most important part of a VN (reading the text is what you’re doing most of the time, after all, right?), but there are a few remaining areas I should cover: the character art is certainly pretty. I really like the Favorite style, and it shines in a few of the sprites, especially Asuho and Komomo. I think their strongest point is actually in the posing, more so than the illustration: Asuho leaning forward in excitement; Komomo wagging her finger or brushing a lock of hair behind her ear; Aoi clutching her hands together before her: these dynamic poses breathe desperately-needed life into the characters, most of whose personality has been lost in translation. And as for the music, well, it’s ho-hum, but it has its moments. I rather like Mare’s theme, and Komomo’s has a strong intro. Most of the soundtrack is fairly forgettable, though. Voice acting is a clear high point: I have massive appreciation for both Chinami’s voice actress (which is actually configurable; I left it at the default setting) and the secret heroine’s voice actress. 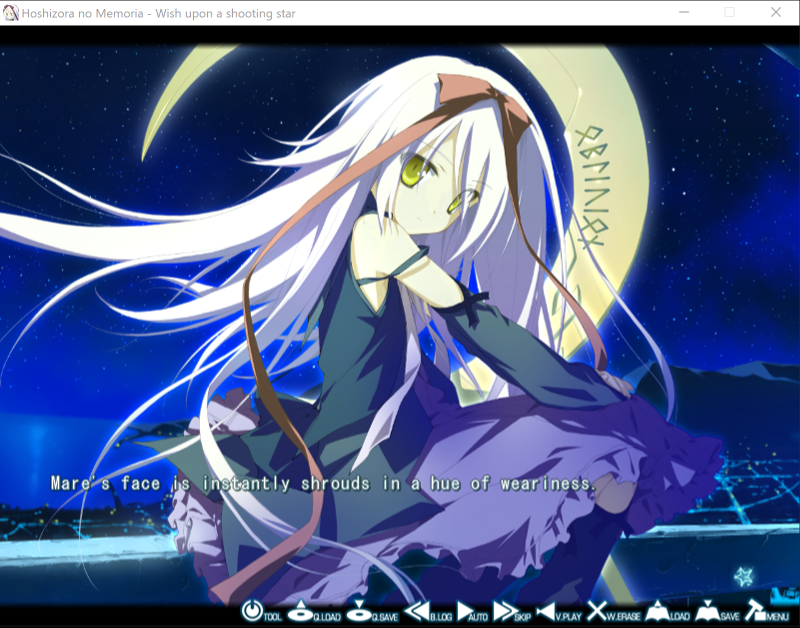 But when all is said and done, getting a passing grade on those areas doesn’t make up for utterly failing in the writing department. I don’t know what the hell happened to HoshiMemo, but this review is me doing everything I can to see that it doesn’t happen again. So help me out here: vote with your wallet, and with your voice. Don’t buy HoshiMemo. If you do (maybe you’re like me and got roped in by the Kickstarter), drop in on Sekai Project and tell them enough is enough: they need to get their shit together. It’s certainly going to take them some hard work to earn my trust back, after this release.

I wouldn’t recommend it, but you can buy a copy of Hoshizora no Memoria on Steam (All Ages) or Denpasoft (18+) | VNDB

+ The character sprites are cute.

- The lowest-quality professional translation I saw this year by a huge margin (note: I don't read machine TLs).

- The narrative lacks focus and is trite and uninteresting.

- Most of the characters and their arcs are at best boring, and at worst intolerable.