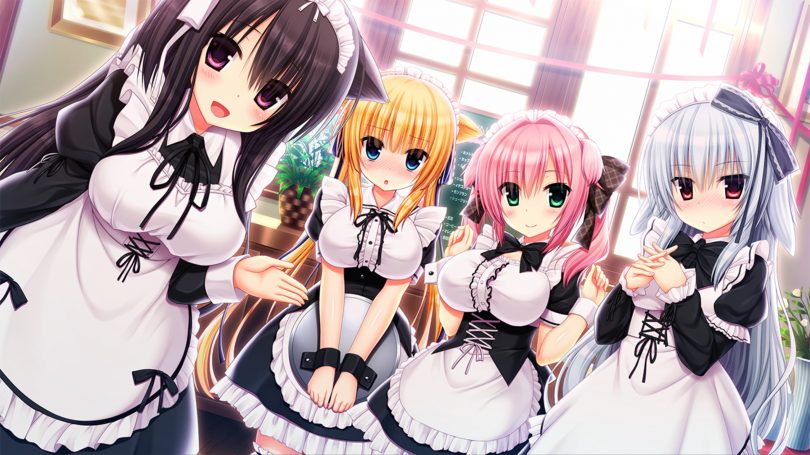 I seem to be reviewing a lot of straightforward moege lately. I guess that’s fine. This particular one has two hooks: 1) the main character is a manga writer (not illustrator; just writer) creating a minor weekly-serialized romcom, DereDere Scramble, in collaboration with an illustrator who turns out to be one of the heroines, and 2) the heroines have massive breasts.

And I mean massive. Mihiro, especially, is well beyond the realm of believability and getting into the realm of, “What the heck were they thinking?” So let’s start off talking about art: aside from thinking the heroines are a little top-heavy, I think it looks pretty good. That said, I admit I’m not especially discerning in this area. The sprites are varied (more on that later), the CGs look good, and the SD art is typically endearing and entertaining. Backgrounds are fine. Nothing extraordinarily memorable here, but no disappointment either. It’s a modern bishoujo game with apparently a decent art budget: as long as you don’t mind its particular aesthetic (big boobs), you’re probably not going to be disappointed on this front. 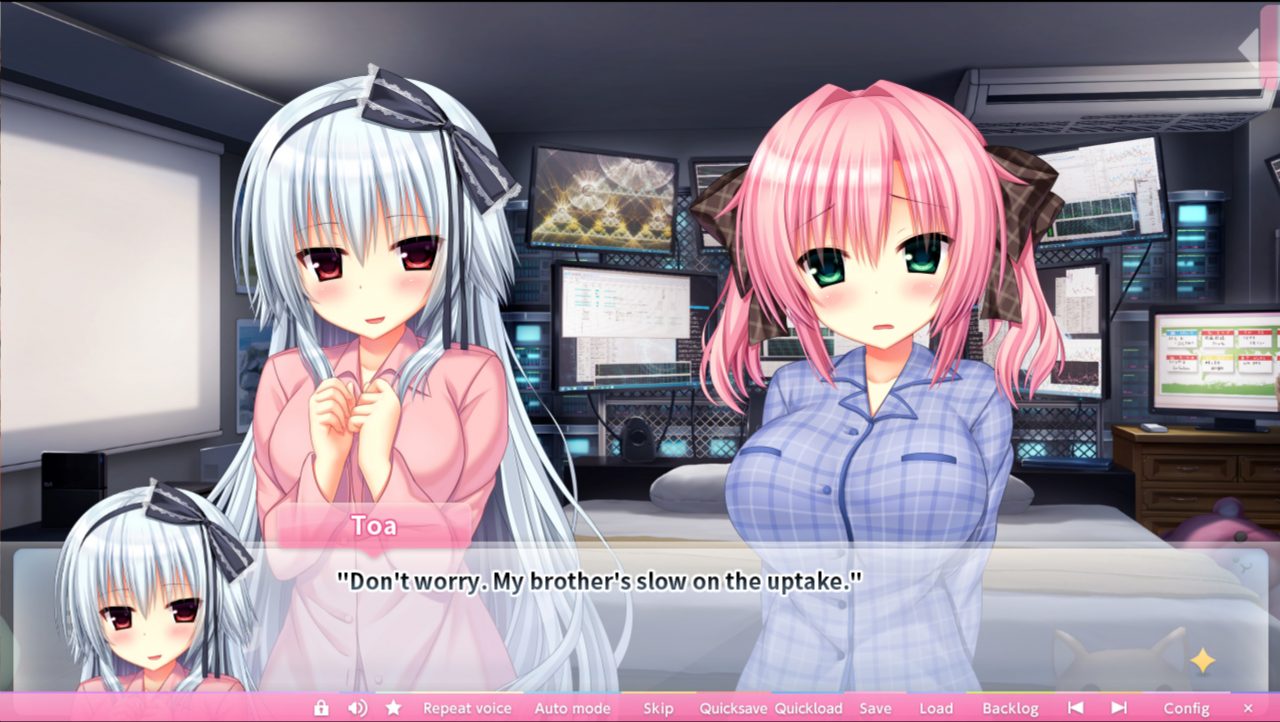 WagaHigh’s biggest draw, and its most distinguishing feature, is that it is a beautifully scripted game. I’ve never seen a game with as much thought and care put into the scripting as I saw here, and it was incredibly consistent throughout. Most games consider it a job done well to give you a new expression for the speaking sprite with every line, and for those rare lines that need some extra punch, they might even switch up mid-line. WagaHigh is on a whole other level: individual lines probably have on average three separate expressions appearing over the course of the line. Short lines have fewer, of course, but lines with four expressions are common. Moreover, everything is carefully scripted so that the change in expression is aligned with the voiced line, so that the changing mood is reflected both in the voice and the sprite. The translation, while staying readable and avoiding the trap of going overly literal, generally keeps thoughts in order so that they match well with the voiced lines and the changing expressions. The unbelievable scripting imbues the characters with incredible vitality: by the end of the common route, I felt like I knew those people inside and out. For me, the obviously enormous effort put into WagaHigh’s scripting really paid off. The attention to detail with facial expressions made the overall experience special, especially for the common route, when I was hanging on every line and watching every changing expression with glee. 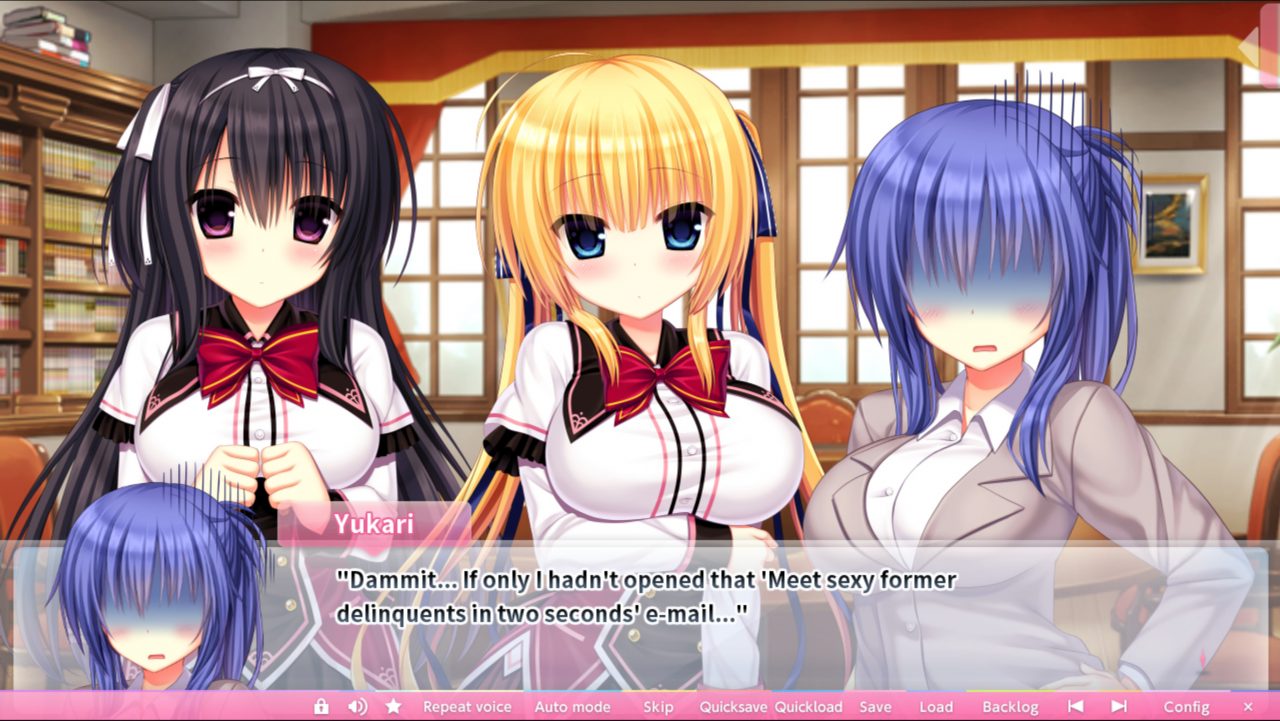 The routes were more of a mixed bag. Ashe’s route was my favorite by a wide margin: it led with a natural progression of the main characters’ relationship by means of a plot which was both unique and engaging, and it concluded with a conflict which seemed inevitable given the characters’ backgrounds and life goals, and which was handled expertly. Everything that happened in the route fit together, made sense as a progression, and resolved in a satisfying way. In contrast, Kaoruko’s route was a mess: pretty much nothing happened for the first three quarters of the route, and then they quickly spun up what looked to be a decent plot, only to have its resolution charge in completely out of nowhere and feel totally unnatural. Fade to white, roll credits, and then a shallow epilogue which felt more like an excuse to show a heroine in a cheongsam than like an actual conclusion to their story. Toa’s and Mihiro’s routes were somewhere in between: not great (Ashe’s was simply great; easily the highlight of the game), but not terrible (Kaoruko’s was actually terrible).

The music is very good. The game likes to lean on a handful of tracks, but “Good Morning to the Sunrise” is so marvelous it sounds like it belongs in a Danny Elfman-scored Hollywood film, so I don’t think I’d mind even if they’d played it twice as much as they did. Sakuragi’s piece, “Straight Ahead,” is far and away the best of the heroine’s theme tracks (and perhaps part of why I like her route so much), and the infrequently used “Run Like the Wind” provides a nice injection of adrenaline for the brief moments when the action kicks in. All in all, it’s a decent soundtrack and well-used. 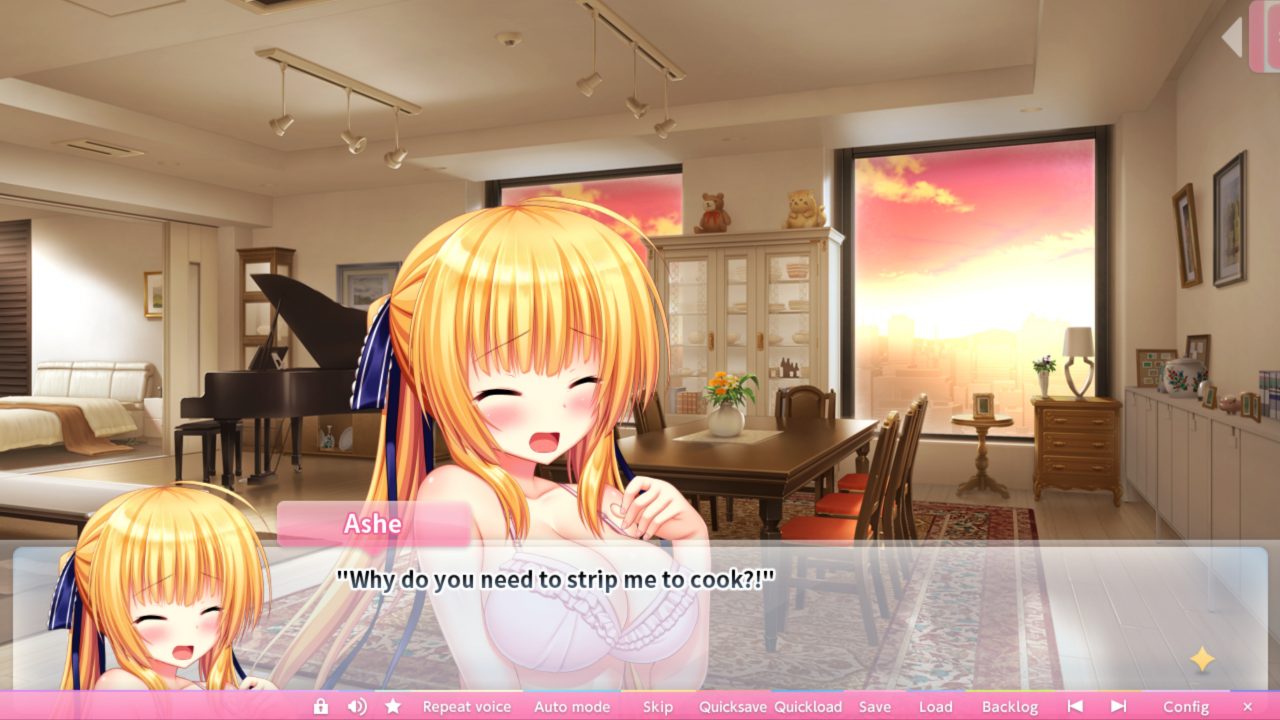 The characters are fine. Kaoruko is a typical supportive, sweet older sister-type, while Ashe is a classic tsundere: both of them are pretty much stock characters, nothing special. Mihiro gets some uniqueness points for being an abusive but head-over-heels underclassman (underclasswoman?), while Toa, the smart but unspeakably lazy and selfish younger sister, is unique in my experience. None of them felt particularly novel, but a combination of good voice acting and the aforementioned incredible scripting made them all feel quite lively and real, which is as much as I ask for from a moege. Despite my summing up Kaoruko so quickly and dismissing her route as terrible, I thought her character was wonderful, or perhaps simply my type. You rarely see characters in a VN who truly deserve to be called “sweet,” but she’s the poster child for it: supportive, loving, and pretty much perfect to the end. But in general, all the heroines captured my heart in their own way. There weren’t any obviously lackluster heroines in this VN, which I claim isn’t common, in spite of my recently having reviewed Chrono Clock which exhibited the same phenomenon. Among side characters, the class rep, the teacher, and even the good-looking male sidekick with horrible taste in women were good complementary characters, though you probably could have evicted the puerile idiot sidekick and the androgynous underclassman and not lost much from the game.

One important point about this game is that it has a central hook (the protagonist is a manga writer), and it makes good on the promise of the hook. I have a beef with certain moege (looking at you, Chrono Clock) where maybe they start with an interesting premise, but then once they have you hooked they toss it out the window and build a route around the relationship. I’m pleased to report that WagaHigh does not suffer from this problem: it sets up certain expectations, and it generally follows through on those expectations soundly. Some routes are better than others at this, admittedly. Mihiro’s route, in particular, lost sight of the manga focus pretty frequently (though there were still obvious efforts to call back to it). But Sakuragi’s, Toa’s, and of course Kaoruko’s all made a big deal out of the manga, and especially out of tying the relationship with the heroine back to the manga itself. Asking for this kind of consistency and follow-through isn’t really asking for much, I suppose, but it’s nonetheless pleasant to see it done. I also will say that I found the manga-oriented side of the plot to be consistently believable and interesting: it does a solid job of carrying the game, where characters alone would probably have fallen short. 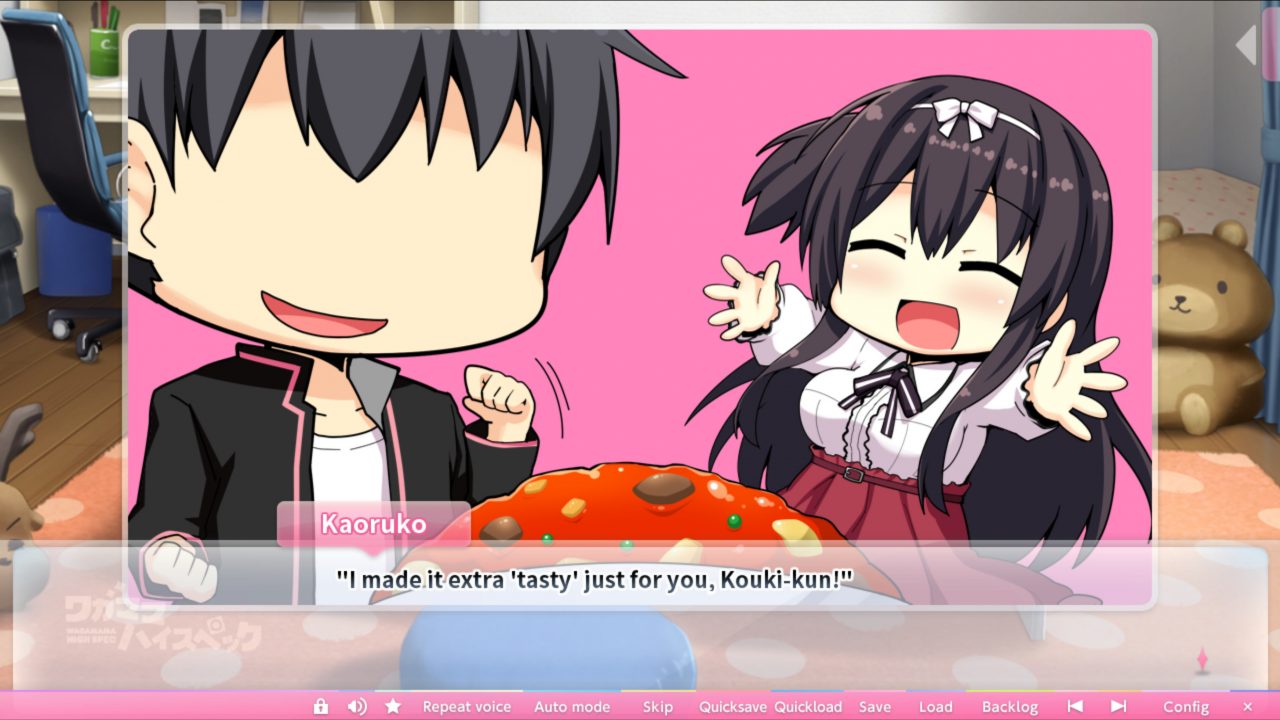 That said, ultimately, this is a pretty shallow game. Pick a girl you like, she naturally likes you back. Things get a bit hairy for a little while, but all’s well that ends well. Like the manga that’s so central to all the stories in this game, the game itself is a simple harem romcom. But there’s a reason this formula is so enduring: it’s also endearing. People like to see pretty girls and happy endings (of all kinds). WagaHigh isn’t anything unique or revelatory, but it is a well-executed game, especially if you look at Ashe’s route in the writing department, or across the board in the scripting department, where, in my admittedly limited experience, it sets a high bar for the visual novel genre. Wagamama High Spec leverages its core plot well, and when the stars align for it, it delivers a truly satisfying read. Give it a try, at least for Ashe’s route.

+ Incredibly thoughtful scripting makes the speaker come to life on each line.

+ Ashe's route is well-written and complete, with drama that's both believable and cleanly resolved: a well-told story.

- Other routes are not as solid as Ashe's, especially Kaoruko's, which feels rushed and incomplete.