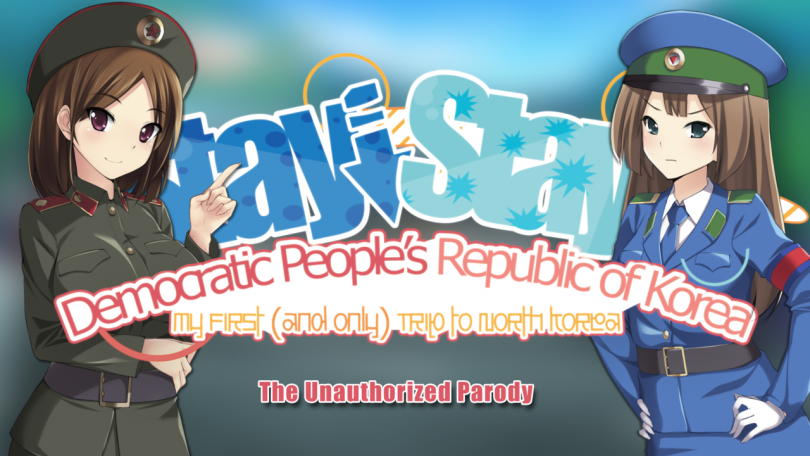 DISCLOSURE: Fuwanovel reviewer Valmore served on the Stay! Stay! DPRK! development team as a writer. His participation on the title has no bearing in this review, but for ethical reasons this review will not have a score.

While gag Visual Novels are a dime and a dozen nowadays, it takes something a bit special to rise out of the ranks. A few years back, OverDrive’s Go! Go! Nippon! did exactly that thanks to an extremely silly premise, a tourism guide/romance game that follows a dumb foreigner traveling to japan to stay with 2 girls he met on the internet. It caught a lot of attention, but who would have predicted that it would grab the attention of Panzermadels dev DEVGRU-P, who decided they wanted to on the offense and beat Go! Go! Nippon! at it’s own game? Enter Stay! Stay! Democratic People’s Republic of Korea!, a Visual Novel the decided to ask the question: What better way is there to make a gag Visual Novel, than parodying a gag Visual Novel?

In my opinion, Go! Go Nippon! wasn’t a particularly great game, or a particularly funny Visual Novel. It wasn’t the writing or comedy that lead Go! Go! Nippon! to internet fame, but the sheer cheesiness of the scenario in this work, and for a good reason: The fact that someone actually made a Tour Guide Romance Visual Novel is a development that is inherently funny and interesting. Add to the fact that it was done in the most ridiculous, low rent manner with its romance tacked on grabbed the attention of many a memer or the attention of those people who like to look at the weird zany shit from japan. Stay! Stay! DPRK! doesn’t do much more than Go! Go! Nippon!, basically taking all this cheesiness and novelty and cranking it up to 11, but what it does have is the benefit of not taking itself seriously and because of this, the work is actually entertaining. It’s not something that seems to make sense on paper because novelty is really a one and done thing, but thanks to DEVGRU-P’s addition of the basically memed North Korea, it leads to a work that ultimately works with the premise, helping to make an actually enjoyable game. 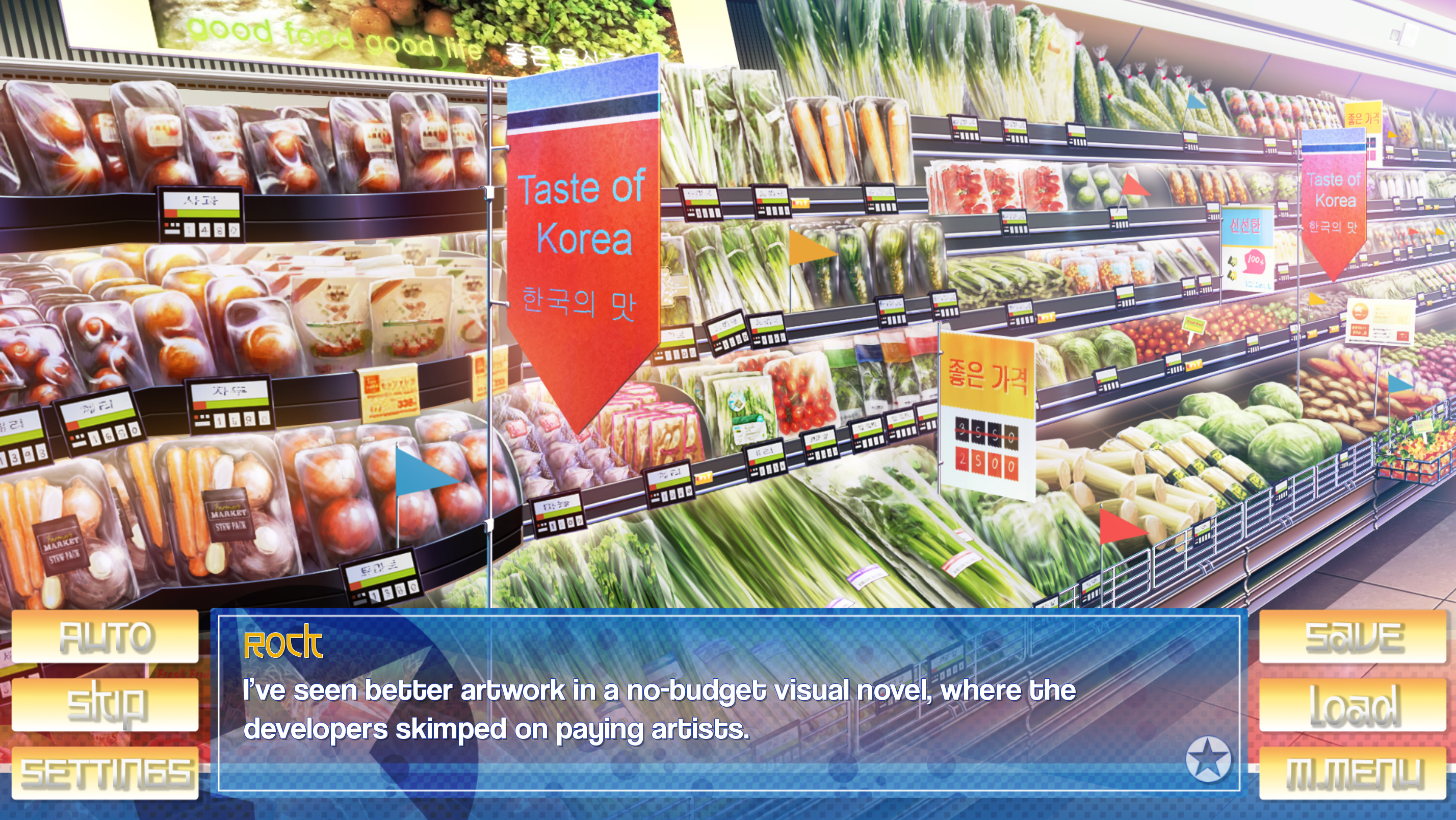 Stay! Stay! DPRK! follows a dumb American Soldier who visits the hostile and isolated country of North Korea, (almost completely unaware of the political status of the country) to stay with 2 friends he knew online, who happen to be cute anime girls. The game definitely doesn’t take itself seriously and is all the better for it, proceeding to make fun of every aspect of this stupid premise, from breaking the fourth wall constantly to jokes about North Korea you’d expect from a game made in the west. Obviously, this means the game is not an accurate deception of the state of North Korea, resembling /r/Pyongyang more than the nation itself. Characters are caricatures of what people truly are, with the main girls being mixed between Visual Novel heroine and North Korea memes, events that occur are your traditional galge affair but with the insanity of North Korea shaping everything that happens, etc. The result though is an enjoyable read, showing what a little bit of self awareness can do to a work, changing something from an amusing but boring work (Go! Go! Nippon!) to something that has a significant amount of novelty, but is actually something I’d actually consider recommending to someone else. 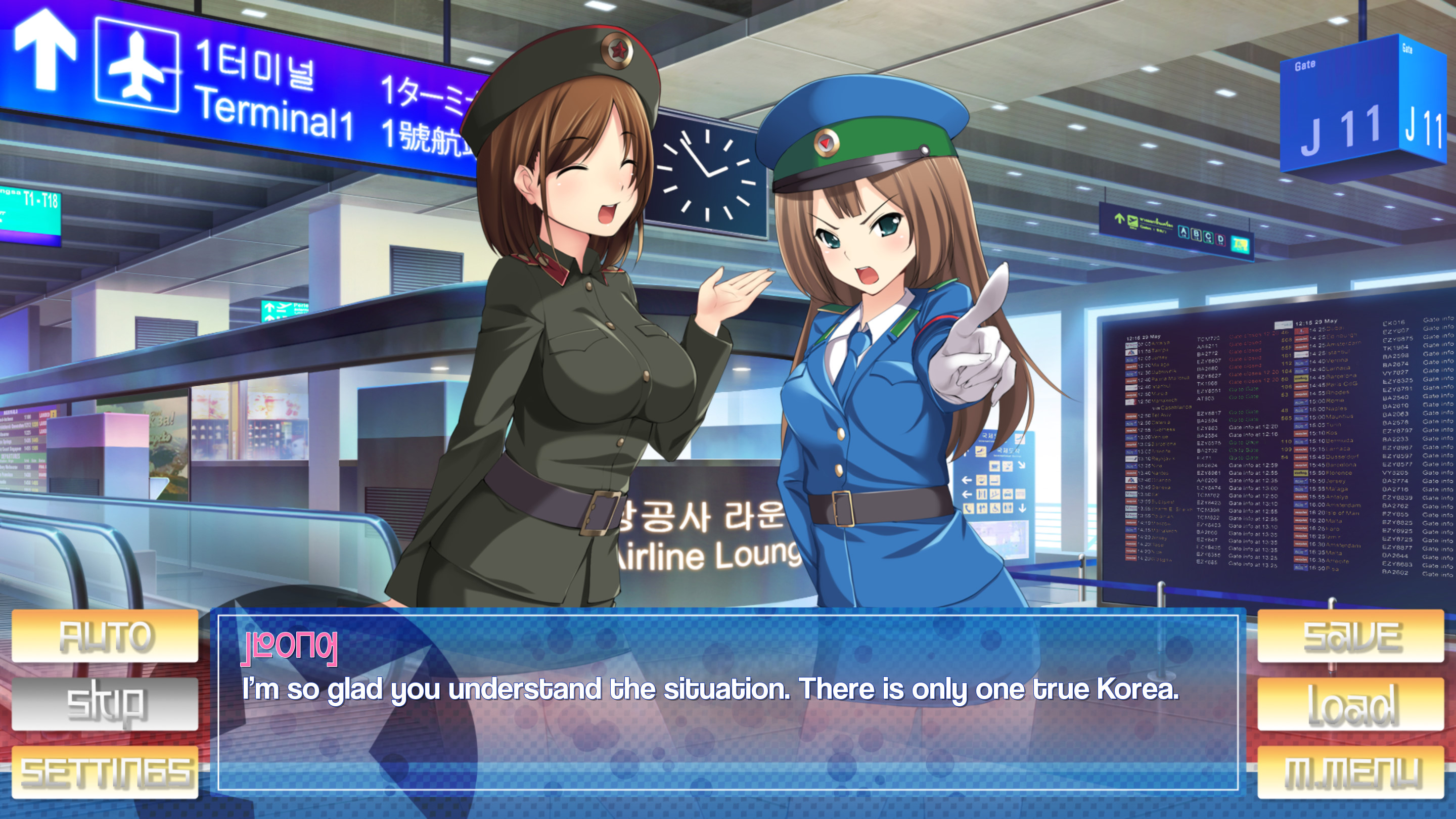 Unfortunately, this act of parody is simultaneously the best and worst part of the game. With a parody of a novel game comes a dose of novelty, which will wear off the further you play the game. It’s a fun read, but there’s not much substance to the game, and the amount of fun you will have with this work depends on how much you enjoy the topic of North Korea, or how much you enjoy the meme culture that surrounds the country. For most people, I would have to imagine that readers won’t be constantly amused by the game, and for me I felt like the writing and 4th wall jokes felt forced at times, getting old about halfway through the game. Furthermore, while it is a parody and is not faithful to real life,  it is still a game about North Korea and thus the tone of the game clashes with the reality and setting of the work. While I appreciated the meme nature of the game, I did expect a darker game than what we eventually got, and a part of me wishes someone would try to make a long, developed and serious route out of this game. The later parts of the game seem like they were trying to do this, but were once again limited by the tone and focus of the game.

One cannot deny the effort that was put into this game though: while this game tries to replicate the low rent feel of the original Go! Go! Nippon! and it’s art for the most part mimics what you would see there, you can tell that attention to detail went into it and the game looks quite great, especially for an indie. There was a lot of charm in the way they executed assets of the game and while I feel like there could and should have been more art and CG in the game, that would take away from the parody, so I’m not really sure what to say there. As for the the music, it was passable (I never really noticed it, but I never thought it was too out of place).

Overall though, Stay! Stay! DPRK! is a Visual Novel that is exactly what is says on the tin. It’s a parody of a gag Visual Novel, and for the most part it is rather entertaining thanks to an amusing premise. It’s a fun time, but the game is inherently limited by the fact that is a parody, so don’t expect anything deeper than that. If it seems up your alley, you’ll probably enjoy it, but if not, you won’t.