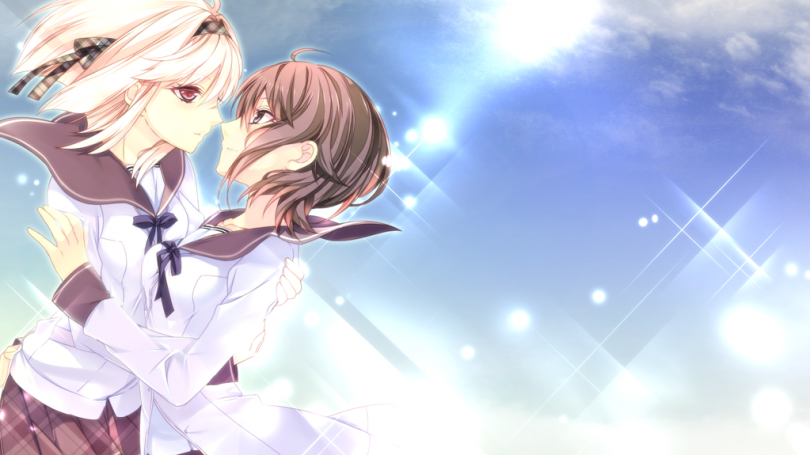 What is it to be a puppet? To be a marionette, one’s every motion the mere aftereffect of the twitch of a god’s finger on a set of strings? To be a golem, animate yet mindless, driven by the will of a master? Or perhaps to be a human, invested with free will yet guided by inherent desires and inborn knowledge?

Does it matter if you’re a puppet? 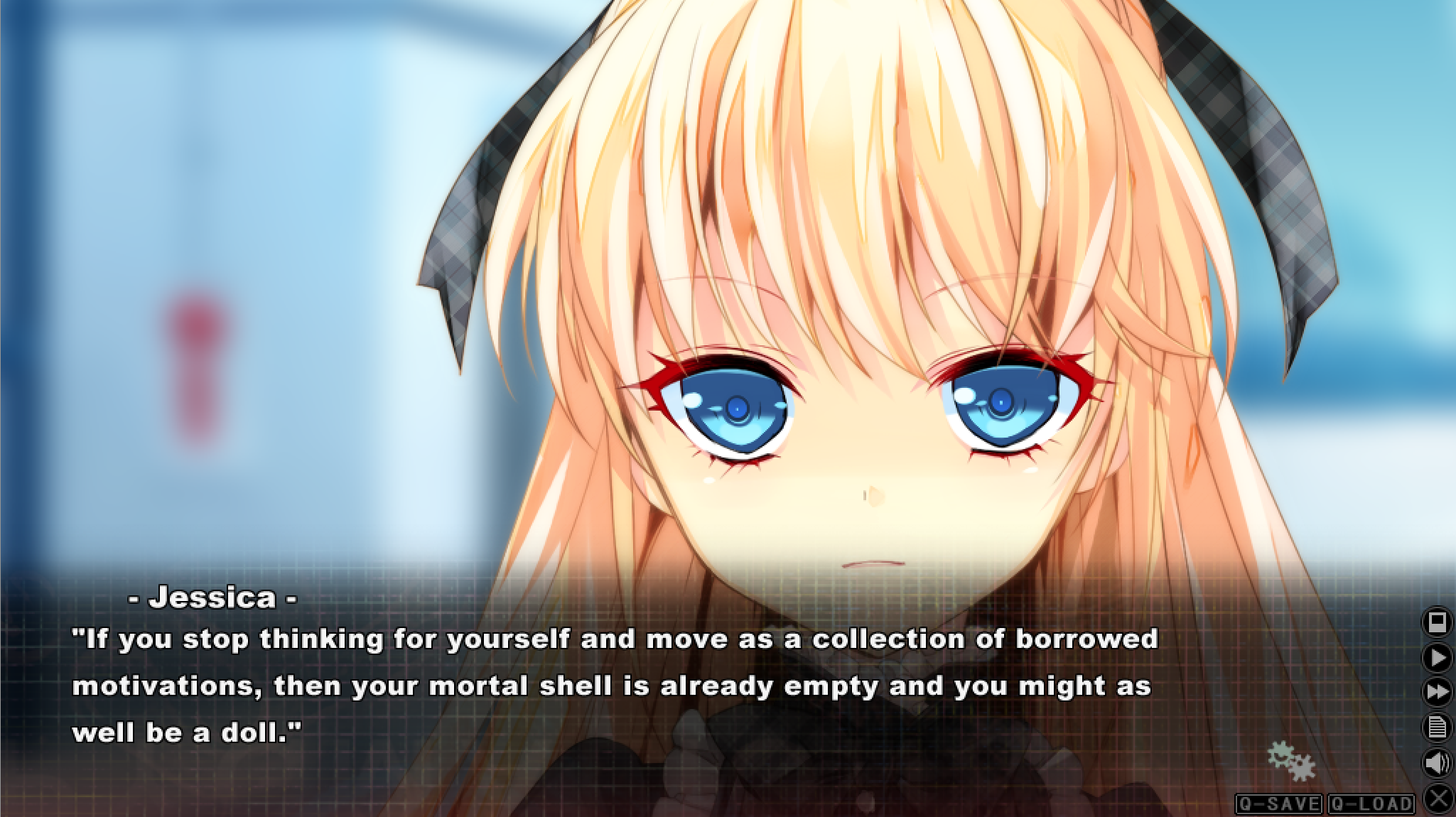 And what is it to be a puppetmaster? To be, not the absent watchmaker god of a deist, nor the petty subhuman squabbling immortals of the Iliad, but an all-seeing, all-knowing, benevolent eye and a pair of deft hands, never forcing, only guiding?

Does it matter if there’s a puppetmaster?

Most of this stuff is well beyond the level of abstraction I normally think at. I don’t sit around having deep thoughts, nor do I particularly enjoying shooting the shit about stuff like this. But when a story engages me in the proper way, in a way that simply presents a sequence of events and causes me to ask these questions of myself, always leading me deeper into the twisting labyrinth of a puzzle, I have to admit, I deeply enjoy it. The Shadows of Pygmalion was supremely successful at making me think about some interesting problems I’d never before considered.

It’s also a good visual novel on other fronts. The plot not only manages to raise interesting questions without becoming overly “philosophical,” it also manages to sustain a constant pace of rising action, with the infrequent, brief relief of tension provided by a slice-of-life scene, and a satisfying conclusion. The routes are a little strange: might-have-been worlds, failures, each uniquely bittersweet. But the final, true ending is clearly the intended story, and is immensely satisfying and well-delivered. Even after I’d just finished the other three routes and then skipped through the game one more time to get to the final, unlocked choice, that brief route caught me by surprise twice, and I cried my eyes out each time. It is a powerful story, and beautifully-told. 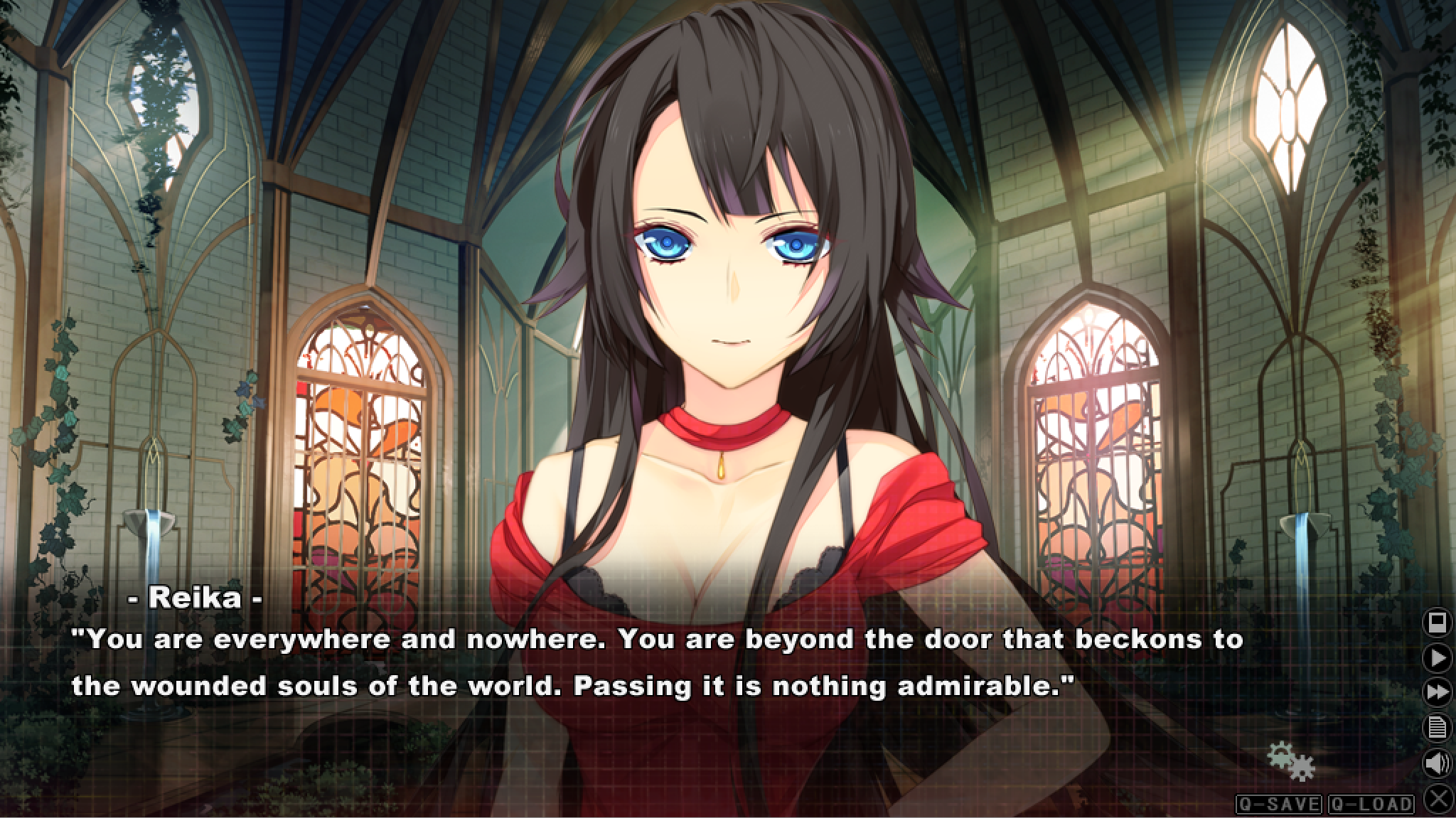 The game’s visual presentation is particularly excellent. I’m not talking about the art so much, though I think it’s all quite good, but more about the game’s scripting. The game uses a lot of inset graphics — vertical slices of a sprite superimposed more artificially on a scene, horizontal slices showing just a lower face or a torso, inset boxes showing only an eye or a mouth, close-ups, distance shots, on and on. These techniques are used far more than in any other VN I can recall reading, but they don’t feel overplayed. Instead they only lend the game dynamism and render the characters’ impact more immediate and visceral. The technique works, and it works well.

That said, the visuals aren’t without flaw. I have to mention the extremely annoying and frequent tearing of the graphics during camera panning. From what I hear, there’s some problem with the game’s engine not implementing vsync correctly. At any rate, the tearing happens a lot, and when it does, it looks bad. I saw one dedicated and talented forum member release a wrapper binary that attempts to fix it, and I actually tried running that for quite a while, but while the wrapper does perfectly resolve the tearing, it causes bigger problems (I saw a single crash during one visual effect, and degrees of black screens during others), so I’m not going to link it or recommend it, and instead I’m just going to complain about the tearing. It really hurt an otherwise visually arresting game. 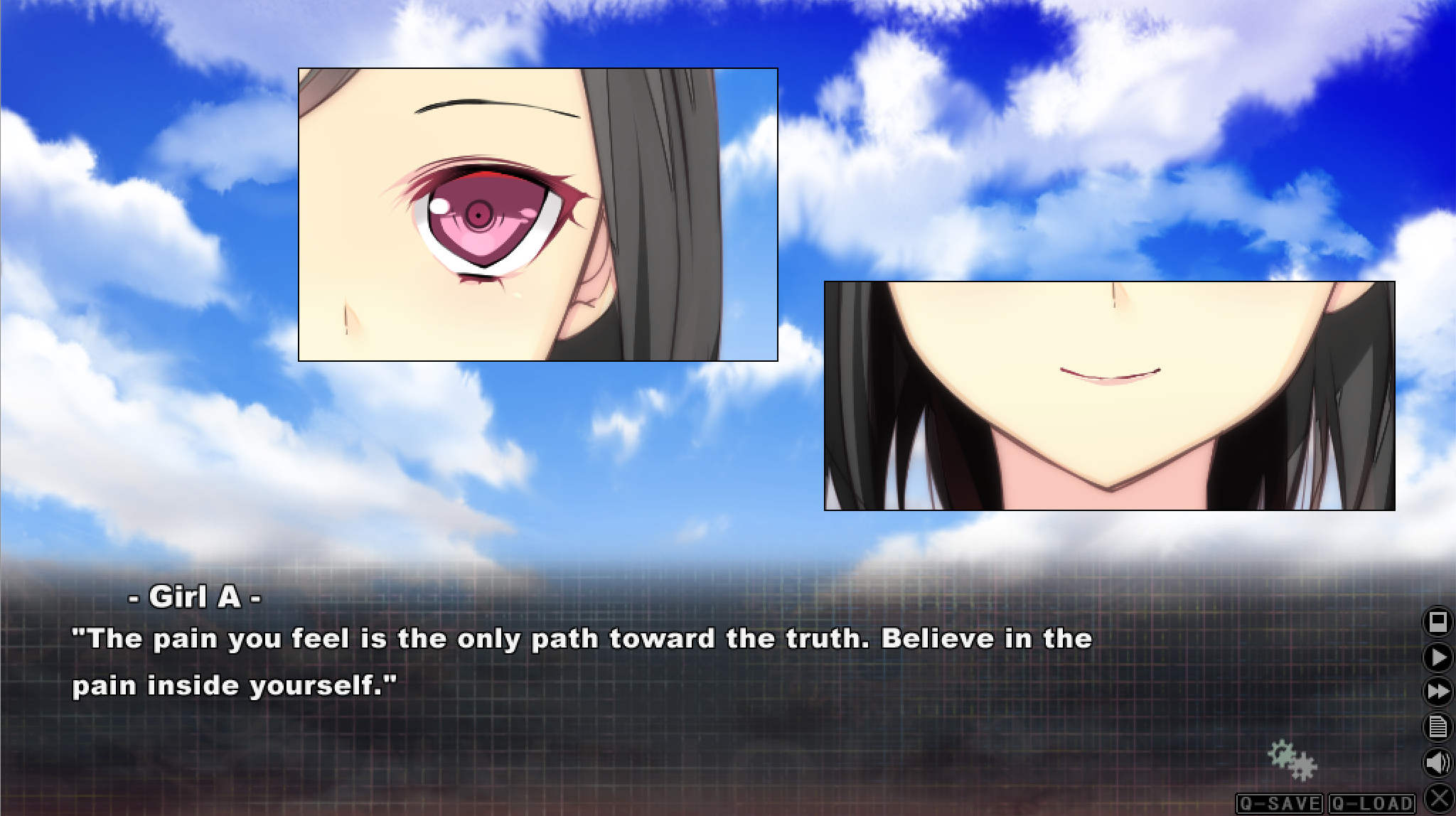 The music is excellent. After finishing the game, I went looking through the unlocked soundtrack, searching for my favorite track so I could talk about it here, and to my complete lack of surprise, I didn’t need to try clicking through songs. As soon as I saw the title, I was absolutely certain I’d found what I was looking for: “DOLLS”. When I was maybe some 10% of the way through the game, the track and its purpose just clicked with me, and I’ve been enthralled by it since. The song is haunting and mysterious, and it’s impeccably suited to the game. Maybe I’m stretching a little too far with this analogy, but I honestly think this was all intentional, and I find it really impressive, so I’m putting it out there anyway: the song, anchored in a minor-key bass line in the lower register of the piano, has a worrying, almost sinister tone, communicating the deep fears that the reader and the point-of-view character share towards the dolls. But the bridge section features the higher register of the piano playing shimmering, unapologetically bright major chords, reflecting the awe and wonder we simultaneously feel for them. The emotions conjured by the song are complex beyond my ability to describe, mirroring exactly the way I felt about the ethereal dolls featured in Pygmalion. I dunno. I’m definitely not as educated about music as I ought to be to try to write this paragraph, and maybe I’m reading too much into this one track… but I don’t think so. I think it really does capture the essence of the game that perfectly. 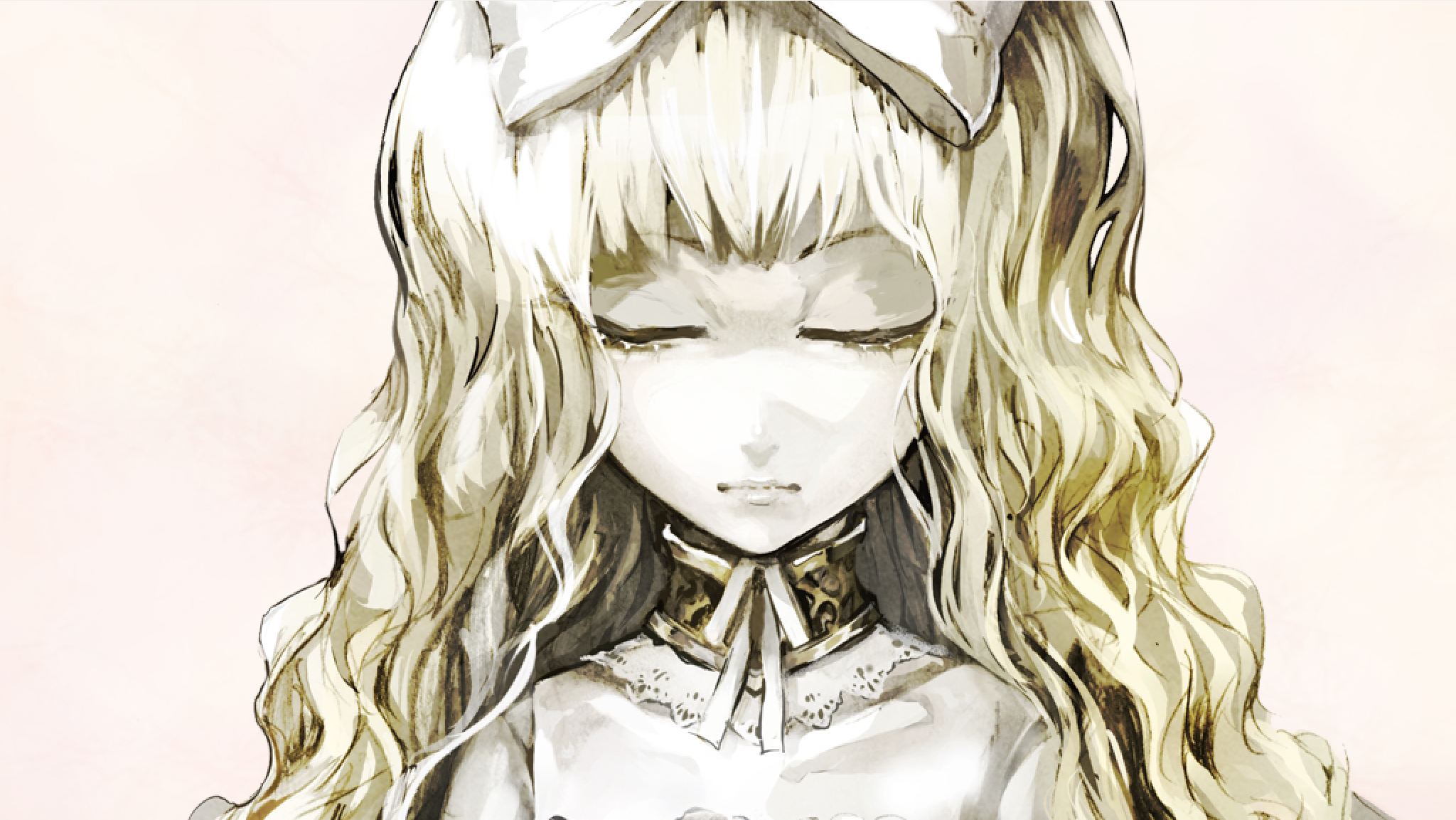 Characters are likeable and interesting. I’d even go so far as to say they’re almost universally pretty deep. There are a couple characters I would’ve liked to see more of, notably Yang and Gramma, who seemed short-changed; and there were a few I was surprised to see so much of, mostly the side characters Minawa and Touko, who got quite a lot of extra material unlocked after completing all endings of the main game (don’t miss it; the extra material provides pretty interesting background for a lot of characters). But overall the characters all had their own complications and quirks, their darknesses, dreams, and desires. It’s a great cast.

The game isn’t everything for everyone, of course. If you’re hoping for a romance fix, look elsewhere. Yes, there’s a lot of the girls growing fonder of each other and a little romance here and there. There’s one kiss scene that will keep you warm at night. But beyond that, don’t expect more than a hint here or there.

Similarly, the action scenes are not earth-shattering. The CGs are lovely and the visual effects solid, but I don’t remember being overawed at watching a fight unfold. The outcome of each fight is never a surprise, nor is it ever even believably in doubt, probably because the fighting isn’t the point; it is a symbolic means to an end, rather than a true contest of strength, skill, or even will. 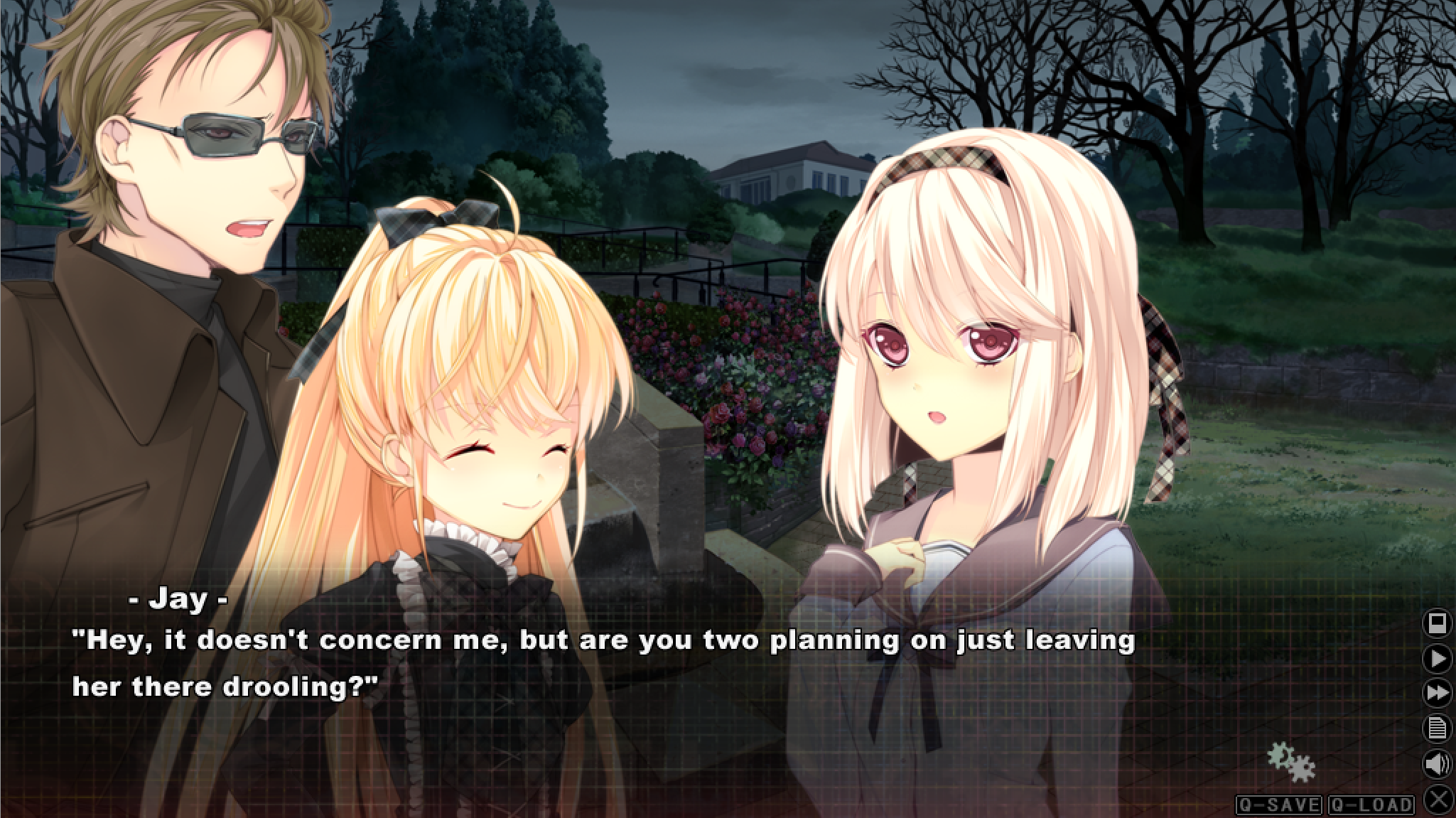 But honestly, that’s not a lot of negative points, and the game has a lot of positive points. One of those I haven’t mentioned is the translation: the writing is stellar. These days I mostly enjoy translations that flow well and read naturally, and in the English-reading VN scene that alone is often asking for a lot, but this one is a clear cut above that bar. In addition to meeting those criteria, this text is eloquent. It’s such a vanishingly rare trait in VN translations that I can’t even recall ever seeing it before, and I drank it up like a man dying of thirst. I’m incredibly grateful to the localization staff who brought this to us.

All right, I’ve probably said too much already, and most of it gushing praise. You can tell I enjoyed this game, and that I fairly unreservedly recommend it, as long as you know what you’re getting into and you’re looking for that, so let me close by briefly summarizing my thoughts: Shadows of Pygmalion is a thought-provoking, gorgeously-worded, interesting plot wrapped in a beautiful visual presentation, matched with a memorable soundtrack. The romance and comedy angles aren’t strong, though the game dabbles in both. The characters and their bonds, however, are strong. The action isn’t particularly vibrant, but the meaning behind it is. So go give Shadows of Pygmalion a try.