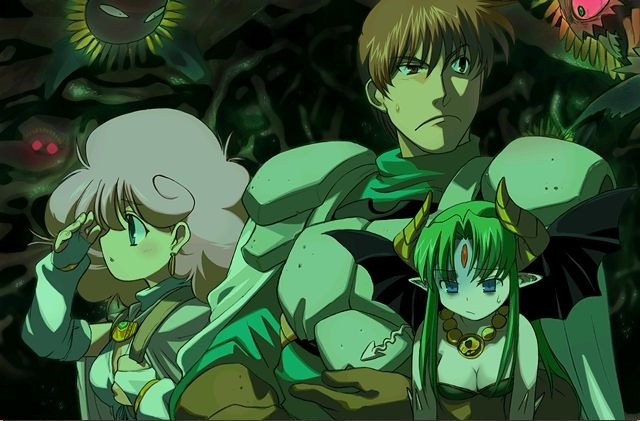 It mostly has S&M scenes, though it also hits a few specific fetishes that aren’t related to that and normal sex from time to time, too. The twist, however, is in how those scenes are presented. Rance is a complete, total idiot, and his sex scenes, while often very hot if you are into the kinks they’re portraying, are also intentionally very funny. Rance is a complete idiot and he will not shut up about the prowess of his hyper weapon or about his awesome imperial juice during sex scenes, which have an explosive, fun music to them and honestly, I’m never sure whether to laugh or to masturbate when he’s doing that type of stuff. In fact, most of the sex scenes in this series are mercenary – they are used as coin, and he solves a girl’s problems for the sole sake of having sex with them.

What’s even more hilarious is that this is overall a pretty serious setting. Characters are generally interesting and they’re working towards their own respectable, interesting goals and they have good designs and nice backstories and motivations attached to them. They face serious threats and can be very compelling.

Rance, however, does not care for the seriousness of those characters. He’ll appear, save all the cute girls he can, have sex with them, kill any annoying guys in the way, and move on to his next adventure. He is an overpowering protagonist, dragging every other character in his nonsensical pace and forcing their big ambitions and their important moments to adapt to him.

Without Rance in the Rance series, you’d be staring at a fairly dark, war-filled world with interesting characters that could lead to some really nice tragedy stories, with a large cast of memorable, easy to like characters going at each other’s throats for their conflicting goals. The world of this series has been very fleshed out over time, and it can be absolutely hilarious to see it as the playground for some lucky dumbass who just so happens to love sex more than anyone and be really talented at the intricate art of hitting people with a sword, and incredibly it can still tug at your heartstrings at certain points if you really buy into the style this series sell. Gameplay wise, both 5D and VI are very solid. 5D’s system has automated combat (that you can customize through changing your character’s movesets as they level up) and a luck based system focused around rolling slots to be able to find new treasure, monsters, the next event, treasure, and a few other wacky things. There’s a timer on how long you can take to finish each chapter and several ways of spinning those slots, and it’s overall a pretty fun game that you can play without putting too much thought into it.

VI is a much more traditional dungeon-crawler, with some interesting additions to the usual formula of that genre but nothing too big. You have to grind a bit more for it, though the grinding in this one is actually lighter than what a pure dungeon crawler would normally be. Charged attacks not spending MP is interesting, it has a nice but not too complicated strategy element to it for the most part and it’s a really interesting game if you’re fond of dungeon-crawlers, though it’s nothing revolutionary and it doesn’t contain anything that might make someone who doesn’t like dungeon crawlers like the gameplay here.

The Rance series is known to have some pretty legendary songs, some often reappearing with their own little twists in arrange in each game and though nothing in this game made me lose my mind as much as rebirth the edge did in Sengoku Rance or the sad arrange of Ontology did in Kichikuou Rance, it’s still overall very strong and pleasing to listen to. The soundtrack captures the feeling of the game perfectly and it’s always a treat to listen to a good soundtrack being used well.

The worst part about this series is that it has no voice acting, which is always a pity. The soundtrack is strong enough that I can call it a fair exchange, but I could see good voice acting greatly enhancing these games beyond the obvious extra of nicer sex scenes, both in serious and in comedic segments. If he does, however, seem interesting to you, and you think you would enjoy the gameplay, hop along the Rance train, since there’s probably a great game waiting for you.

- Style- Rance is an idiot and a jerk, and it can put people off