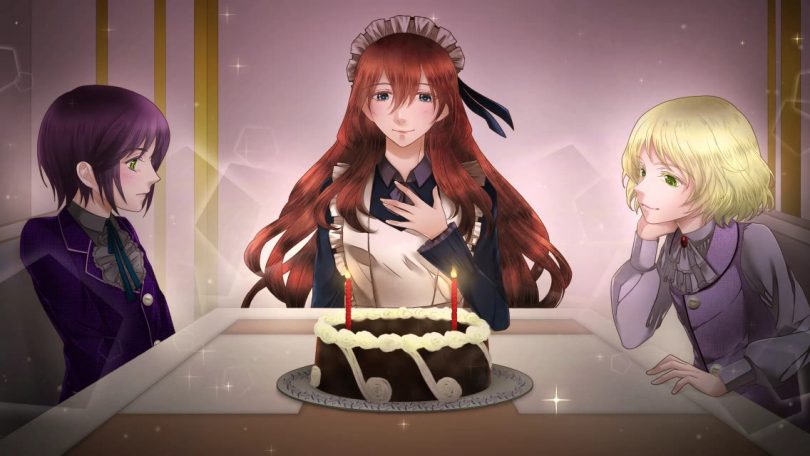 Café 0 ~ The Sleeping Beast ~ is the second game of the Café 0 series – The first one being Café 0 ~ The Drowned Mermaid ~ – developed by English Visual Novel developers roseVeRte, the team behind the East Tower series and the cute game How to Take off Your Mask.

The Sleeping Beast begins when our protagonist, Corliss, whose name can be changed to whatever the player pleases, finds herself in front of a mysterious cafe. She is received by a mysterious man named Noir, who tells her that she is dead but her soul did not go to heaven and that she is now stuck at Café 0. He offers her the chance to relive the last seven days of her life, and find a way to the afterlife.

But the story has more to offer than that, with villagers fearing an accident that happened 15 years ago at the Ashford Manor, the various suicides of orphaned children and the disappearance of Corliss’s aunt, Sophie Evans. This terrible past still haunts the present, with the two Ashford heirs, Nathan and Ethan, curious about what happened 15 years ago and Corliss seeing the memories of her past when she sleeps.

The story is what made the game so interesting and stand out from all of the EVNs I have played. Café 0 isn’t a game about romance and anyone approaching this game thinking that it is just another ordinary otome game focused on romance will end up disappointed or surprised. I’m happy to say that I was surprised. The story at its core, is simple, but the way it is told is incredible. You have two parts in this game: The present, with Corliss, Nathan, and Ethan, and the past, with Sophie Evans and the villagers around the manor.

In the present, Corliss, reliving the seven days before she dies, has the choice to do things differently, interacting with Nathan and Ethan. One thing I really liked about the routes in this game is that each route ends up being a different kind of relationship. Be it, lovers, family, friends and partners, it’s nice to see two characters have a relationship other than lovers. Plus, these choices define what memories of the past Corliss is going to see.

To reach the truth about what happened 15 years ago and know how Corliss dies, the player has to play the four routes of the game, two routes for each twin. Each route has it’s own charm and brings a piece of information about what happened 15 years ago, but the true route still managed to surprise me and make me emotional, which made the 13 hours I spent playing this game really fun.

The three protagonists help make the story shine. Corliss, despite being apathetic at the beginning, still made me laugh and I did not find her boring at all. Her development, considering that she only has six days to live, was good too. The twins, Nathan and Ethan, each had their own fun quirks. While Ethan was charismatic and outgoing, Nathan was a little more reserved but very kind. Even the secondary characters had their own personalities, though they don’t appear very often.

The art of the game is pretty, but it’s not outstanding. The sprites for the characters are well drawn, but they are hurt somewhat because of the backgrounds which are incredibly simple and lack details. The CGs, despite some weird anatomy, are all really pretty and the sparkle animations give them extra charm. The art is not the strongest point of this game, but that does not mean it is bad.

The music was simple, but suited the game well. The soundtrack didn’t annoy me and I felt that all the songs improved each of the scenes and the game as a whole, making sitting through it a lot more pleasant. Still in the sound department, the game offers voice acting, and what surprised me the most was the fact that the voice acting was Japanese. More and more EVN are including voice acting, but what sets Café 0 apart is that Corliss is voiced, and I love when the protagonist is voiced. Even the random characters like “Villager” and “Woman” were voiced. The game is truly 100% voiced.

In conclusion, I was surprised with Café 0 ~ The Sleeping Beast ~. I went into this game not expecting much, but it well surpassed my expectations. You can see how much work the developers put into this game and into the story. Even though at the end there was some stuff that felt forced to me and didn’t sit really well, the story is still very enjoyable. Café 0 ~ The Sleeping Beast ~ is a good game and I definitely think it is worth a shot.

Just because I want to fuck a cake doesn't mean I'm a pervert.