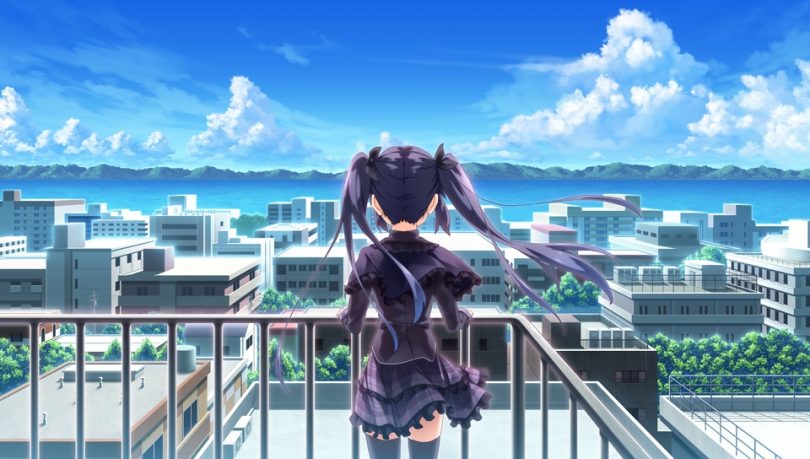 Himawari is the little doujin that could, making a big name for itself in Japan with such a small budget and development team. And with how ambitious it is, it’s easy to see why. It’s a gem with the potential to shine as radiantly as the biggest VNs out there. However, it’s also a gem I found to be rough and riddled with flaws. This contradiction is one I couldn’t fully come to terms with.

The story begins in 2050 when a futuristic pod containing a mysterious girl crash lands in a nearby park. Who is this curious girl? Well, she must have bonked her head or something in the crash, because not even she knows. The setup is cliched, yet effective. The the veil of mystery surrounding the plot serves as a strong impetus to keep reading. Yet it’s not that story that receives the focus in the beginning. What follows is hours of slice of life comedy with the mysteries dangling tantalizingly out of reach.

Of course, common routes full to the brim with light-hearted slice of life scenes is a staple of Japanese visual novels. What’s weird here is how out of place it actually feels. It’s funny — hilarious, even — and it helps you grow attached to the characters, but it still feels at odds with the serious kind of story they try to tell. Himawari has a branching structure with a strictly-enforced route order. They utilize this structure in an attempt to construct a rollercoaster of a story to enjoy, but what they ended up with feels rickety and uneven, not the smooth and thrilling experience you might have wanted.

And to exemplify this, Himawari pulls an abrupt 180 once the initial route ends and the next chapter begins. Taking place two years earlier, it’s dark and moody, with the protagonist brooding in a darkened room in almost record time. It’s not a downer the entire time, there are still light-hearted moments to be had, but the whole experience feels quite a bit more melancholic than the VN’s first chapter. This second chapter is actually much more consistently paced. The characters have time to show new and interesting facets of their personalities, they trickle in clues to the overarching mysteries at a good pace, and the moments of levity keep things from feeling too bleak. It’s stunning how much better this second chapter is than the first. 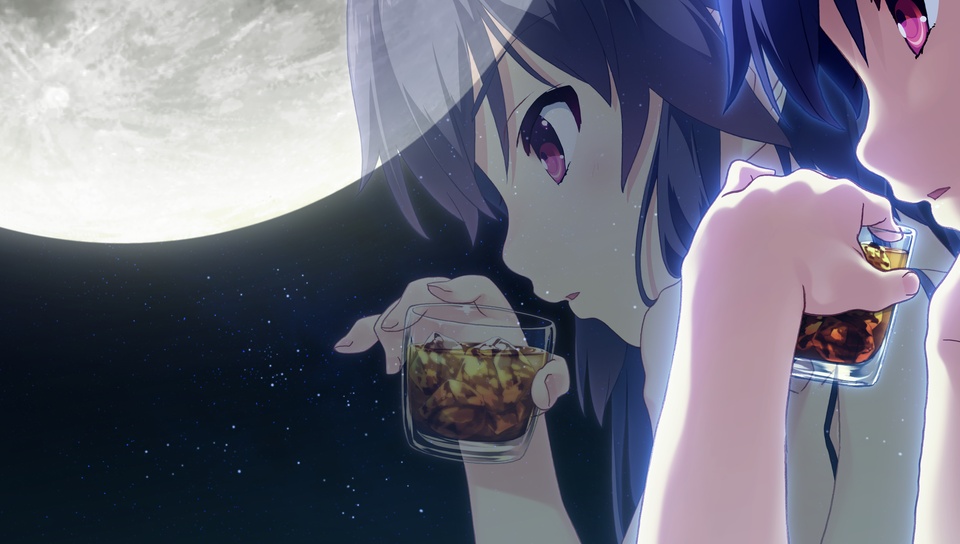 This is when the story truly kicks in, when they start laying on the backstory thick and heavy. This isn’t your typical sci-fi story, either. Himawari is quite literally “science fiction,” and that’s not as dull as you might think. The scenario writer G.O. is very well-versed in the scientific subjects he tackles, and uses his knowledge to great effect in the construction of Himawari’s story. Many of the game’s major plot points are given detailed scientific explanations that are fascinating to read and sound just plausible enough to allow you to easily accept them, despite clearly existing in the realm of fiction.

The heart of the story in Himawari, however, has very little to do with the complex scientific topics it tackles. The second chapter introduces a several new characters who are involved in a complex web of drama that goes back years. Himawari is in effect a multi-generational romantic drama. It almost reminds me of Hoshizora no Memoria in some respects, one of many VNs that was likely influenced in part by Himawari. The sci-fi backstory serves as the impetus for the previous generation of characters, but the bulk of the VN is about how the current generation has to deal with the aftermath of decisions made over the previous years.

The second chapter draws from the past with judicious use of flashbacks and infodumps, efficiently weaving the exposition gained from them into the current story, while giving you regular doses of cathartic revelation that makes you view the events in 2050 in a whole new light. Combined with the strong pacing, this part had me more engaged than I’ve been reading a VN in a long while. It is good enough that I was able to overlook its flaws, such as how rushed and bizarre the central relationship is. I just didn’t care, and wanted to keep reading. And then its ending is among the most powerful I’ve ever read in a VN.

If the rest of the VN was this good, I don’t think I’d ever be able to stop talking about it. Unfortunately, what follows is a steady downturn of uneven pacing, sloppy character development, and a hodgepodge of themes with muddled and incomplete messages. The game returns to 2050, and with it the easygoing slice-of-life nature returns. This is fine if they can pace it well with the rest of the story, but they cannot. The romance in the Aqua route is rushed, I never quite figured out how those two characters actually fell in love. The impact of its messages feel blunted by how the Aqua character is written. And some of the characters feel inconsistent with how they behaved in the past. In short, it’s a messy story. 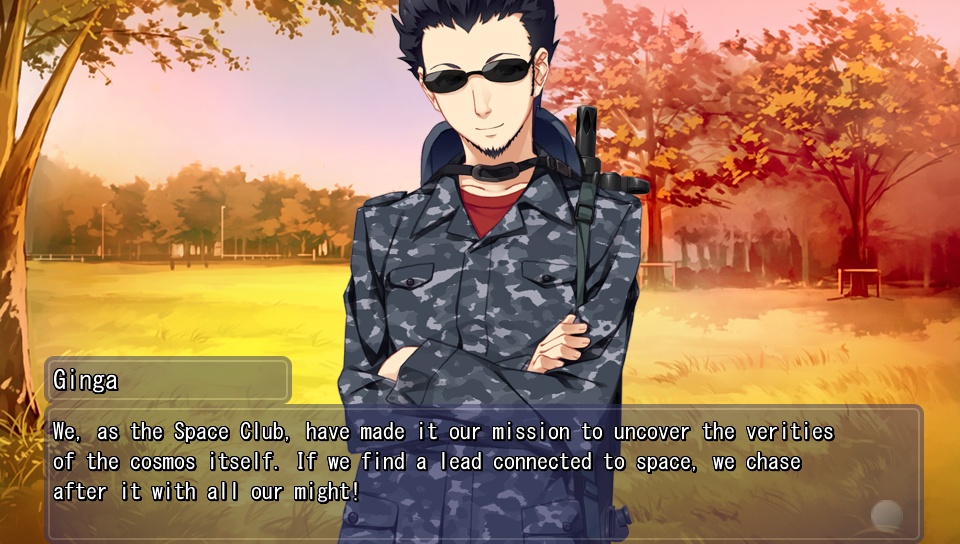 The next route doesn’t feel much better, either. The abrupt turns some of the characters make are a little too hard to swallow. This is ultimately the way the entire rest of the VN plays out. Too many shortcuts are made in the storytelling, and too many characters behave inconsistently. Coming from my high following the stellar second chapter, this was all too much of a let down for me. Himawari writes a slew of checks it’s unable to cash.

And then the side stories happen. Once you finish the main story, three side stories open up in the main menu. One really short story focusing on one of the main heroines, and two rather long multi-hour affairs that supply ample amounts of additional backstory and even introduce a whole new major plot element. That’s right, once you reach the conclusion of everyone’s story, the game decides to essentially turn everything on its head with a new plot device. And then once it’s done flipping the table on you, it simply ends.

I believe these side stories were meant to be a prologue for the Aqua After fandisc, but in the version of the VN we received, they are positioned as epilogues to the main story. And they are awfully destructive epilogues, at that. They start something dramatically different from what we’ve been experiencing up until that point, suggesting that everything you thought you knew about Himawari was a lie, only to end it at the peak of your confusion. Want the conclusion? Better hope MangaGamer translates Aqua After as well. Maybe we’ll know what really happened in Himawari in 2018. The real shame is that these side stories aren’t even very good. The second one, to put it bluntly, is a horribly uninspired second-rate mystery story. The decision to include them in this release is simply baffling. 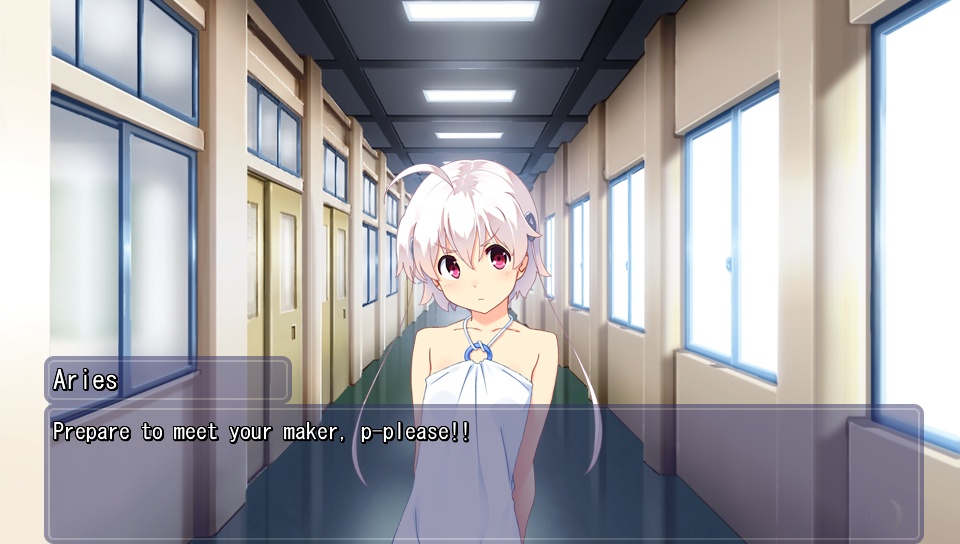 The art feels just as confused as the writing. Not to say the art is bad, but it feels horribly out of place. Simply put, it’s adorable. The extreme moe-ness of it feels wholly inappropriate considering the rest of the work’s tone. Even during the light-hearted moments, there are undertones that feel at odds with the aesthetic. It quite honestly never sat right with me. At least the music is good. Well, the compositions are good. The version that MangaGamer released contains some rather dubious rearrangements, however. Thankfully there is a fan patch that restores the original doujin version’s music.

I’m also glad to say that the translation is rather good. The translation was handled by the same duo that tackled Tokyo Babel. If you read that one, you know how capable these guys are. The dialogue has a humorous, natural feel to it that matches well with the VN’s tone, and the characters’ unique personalities shine through well, although there are some odd translation choices in a handful of instances that seem incongruent with the rest of the translation. I have to say that the translation does feel a bit unpolished overall. I spotted numerous typos and grammatical errors, as well as a couple missing/repeated lines. This aspect is mystifying when you consider that the translation was finished an entire year before release. MangaGamer had time to proofread it and provide a more polished product, but they didn’t. I can’t even begin to guess as to why not. As of this writing, over six weeks since release, there has yet to be a fix patch, although apparently one is on the way.

If I sound disappointed, that’s because I am. Himawari should have, and could have been better. The peaks are tremendously high, and the potential is there for a masterpiece, but Himawari falls tragically short. When all’s said and done, though, I can’t say I hated my time with it, side stories excepting. The high points are truly memorable, and even the rest of the VN has its moments. But I can’t forgive its lower points, or look past its numerous flaws. Himawari will live on as an inconsistent yet noteworthy experience.

Pick up your copy of Himawari – The Sunflower – here | VNDB

Update: A patch went live on 1/19/2017, one day after this review’s publication. Its purpose is to fix various translation issues, though we have not verified if it fixes all issues spotted.

+ The slice of life moments are genuinely cozy and hilarious.

+ Very strong second chapter with pacing and drama that's a cut above the rest.

+ Intriguing use of science fiction elements.

- Inconsistent characters and overly convenient writing makes some of the drama feel contrived.

- Sloppily paced with a story that stops and goes in spurts.

- Mediocre side stories that close the experience out on an awful cliffhanger.