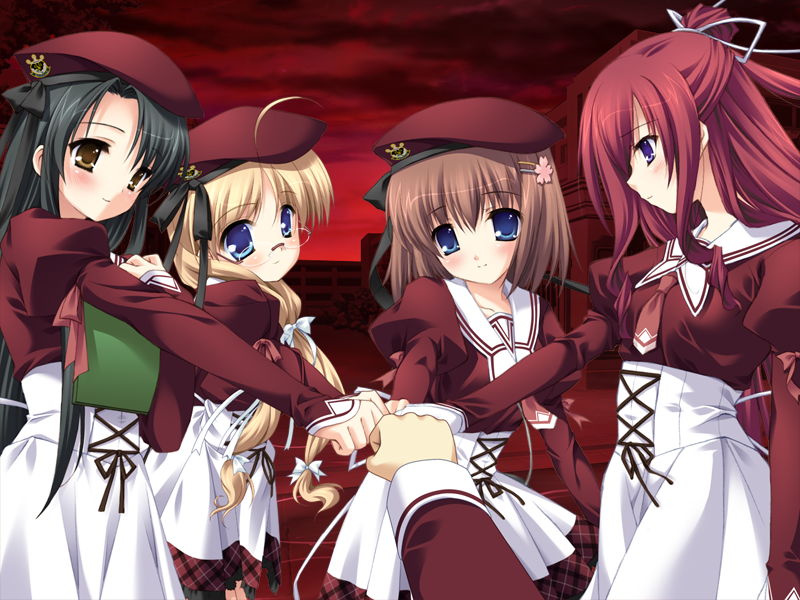 11eyes is a classic chuunige, a game focused on people gifted with supernatural powers and thrown into violent combat against otherworldly enemies. The action generally takes place in an alternate dimension, dubbed “the Red Night” by the characters caught up in it, but while about half the game is an action-filled brawl in a fantastic setting, the other half plays out more like a standard moege: in the real world, between bouts in the Red Night, the protagonist is surrounded by cute girls throwing themselves at him.

I’ll start by saying, as I have before, that I rather like these elements: supernatural powers, lots of action, saving the girl, saving the world, and so forth. Comyu and Demonbane, other well-known chuunige in the small world of English-translated VNs, remain some of my favorite VNs. However, 11eyes, for a variety of reasons, didn’t work out so well for me. 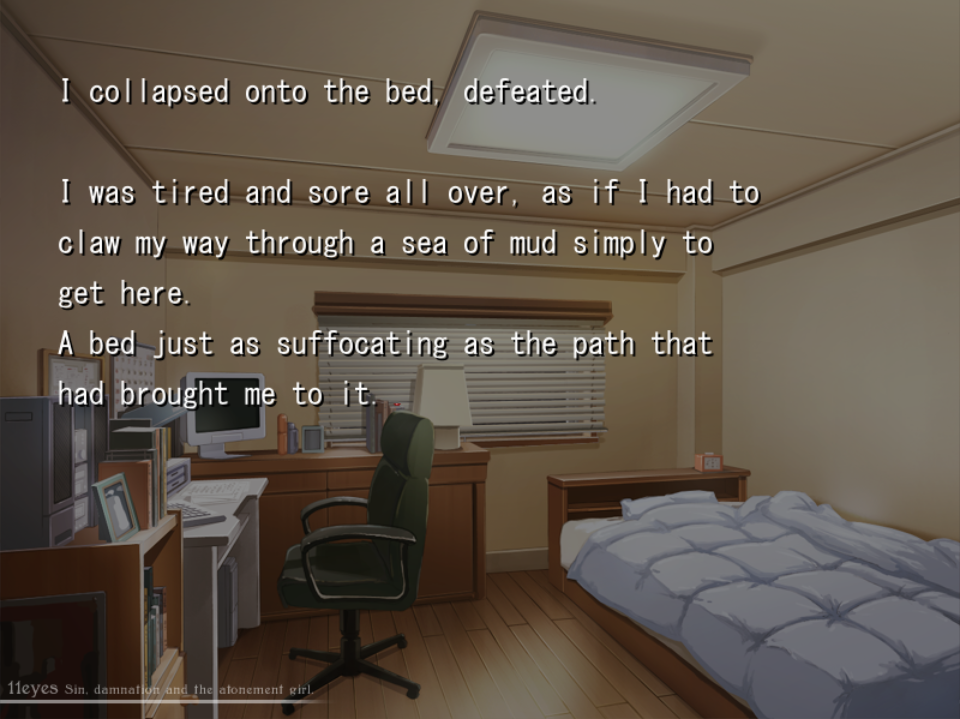 For starters, I hate the protagonist’s guts. He’s whiny, emo (right down to his haircut), and completely self-absorbed, and he doesn’t really grow at all throughout the game in spite of the game desperately trying to claim otherwise. I think the intent was to have a self-insert protagonist, since the annoying side of his personality recedes somewhat throughout the game as he uncovers his own powers, in favor of, well, basically no personality at all. Nevertheless while playing I couldn’t help thinking what an annoying little shit he was. The writers were perfectly aware of this (see screenshot…), but apparently decided it was all well and good, and that having a petulant brat for a protagonist was a fantastic idea. 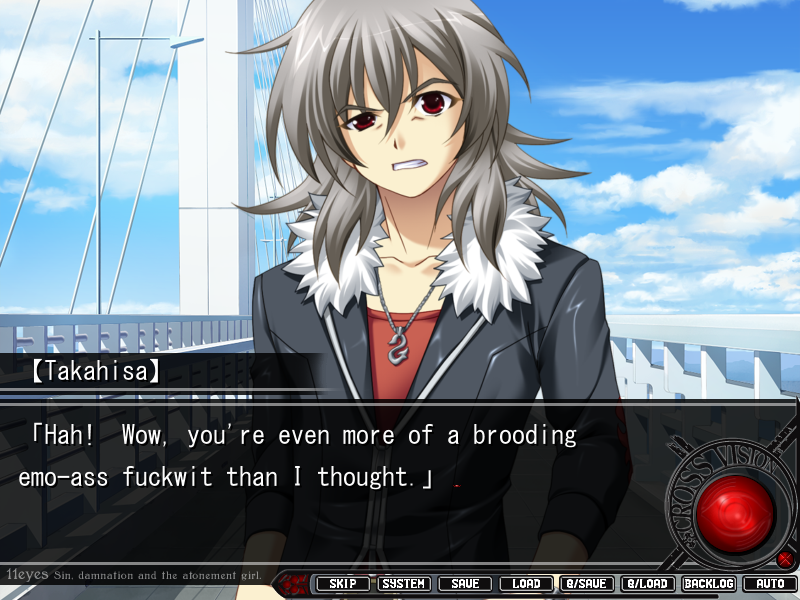 The heroines, fortunately, are generally much more likable, as is the other male member of the group, a rough-and-tumble kind of guy who is much more interesting than the idiot sidekick character the game leads with. I found Yuka, the childhood friend and the heroine who gets by far the most screen time, to be very bland, but the other heroines had at least something interesting to offer, especially Yukiko with her unusual personality, and my favorite, Kukuri, with her mysterious background, her bizarre powers, and the unusual twist of her being mute. Unfortunately for anybody interested in Yukiko, she gets completely shafted by the plot, basically falling out of the game for the last few hours, only to reappear in the epilogue of her route with a couple token H scenes that feel extremely forced because of how little interaction she has with the protagonist otherwise. But fortunately for Kukuri fans, she gets the best treatment of any of the heroines, getting both a better part in the climax of the game as well as a sort of after-story to the main game which is, IMO, the intended true ending. 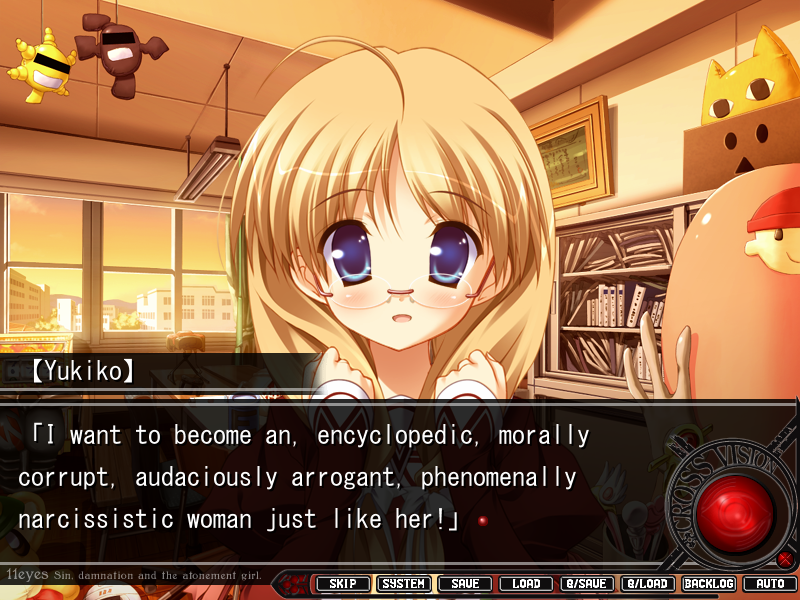 On that topic, I really disliked this game’s approach to routes and endings. It nominally has multiple, but with the exception of Kukuri’s after-story, they change absolutely nothing about the key events in the plot, essentially only serving to give you a choice as to which girl appears in an H scene after the credits roll. There are a few minor scenes that change, but absolutely nothing of note. If you play just Kukuri’s route and her after-story, you’ve seen every trick the game has up its sleeve, and the rest of the routes are just more of the same. While the game has dozens of choices, they’re either differentiating a brief, not-plot-relevant scene, or they’re potentially leading you to an instant bad-end. That said, trying to choose correctly on that latter type of choice (which in my case meant trying my damnedest to get the protagonist smeared all over the pavement at every opportunity, before then choosing correctly and moving on) can be pretty entertaining. I found myself gleefully saying aloud “Time to die!” whenever one of those choices came up. Aside from the instant bad-ends, choices don’t mean much at all (aside from the single “pick a girl from the group of four” choice), and route differentiation is basically non-existent. Hooray for wasted time watching the game go by on skip, except when it pauses so you can select the choice that doesn’t get your head lopped off. 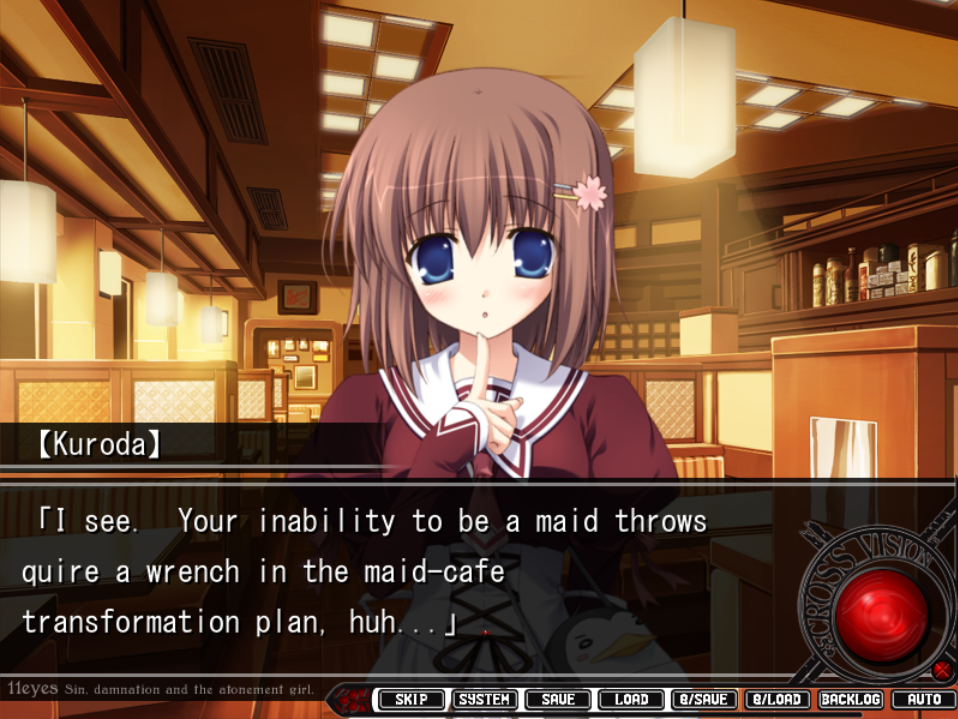 The plot is pretty engaging. There are enough mysteries to think about and enough hints to follow that you stay engaged on your first time through. Since nothing changes on subsequent playthroughs, though, it is inevitably a chore to go for more endings. This game uses a unique feature to tell a lot of its story, which it calls Cross Vision. This feature does double duty both as a scene replay feature for all scenes in the game and as a way to view various events from points of view other than the protagonist. Sometimes this gives you a different perspective on events you’ve seen already, but more often it lets you see events that the protagonist never even witnesses. Sometimes these are from the antagonists’ perspective; sometimes they’re from decades or centuries in the past. I’m a big fan of VNs that switch up the point of view character, and for me this added a lot of flavor and background to the plot. Seeing the antagonists’ view of events is particularly interesting, and does most of the heavy lifting for gradually pulling you deeper into the game’s various mysteries, without resorting to much info-dumping. If you do play the game, make sure to religiously watch the Cross Vision scenes as they unlock. 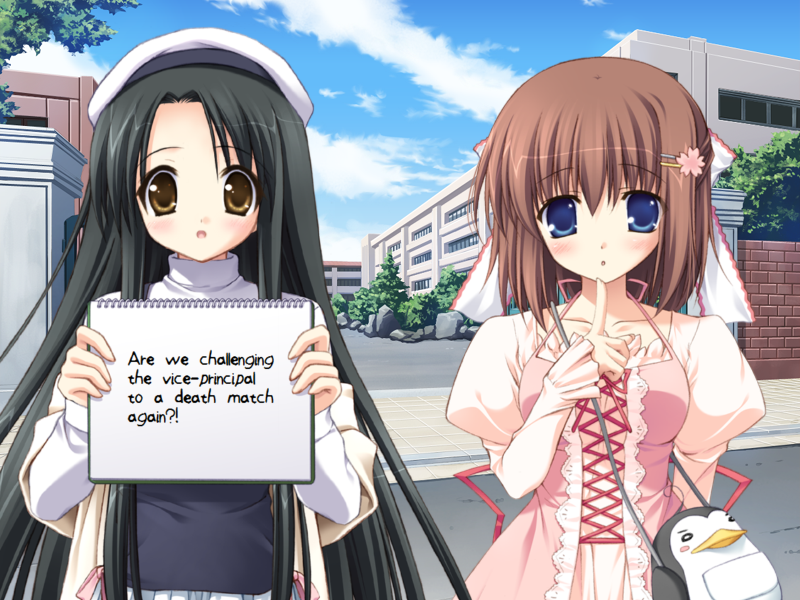 Unfortunately, I feel obligated to talk about the translation in this review. I can’t call it good. I estimate, based on the frequency I felt like I was hitting them, that the translation has thousands of typos; and no, I’m not exaggerating. At approximately 50,000 lines, one typo every 50 lines will get you into the one thousand range, and I’d generously estimate one typo per 10 lines. Moreover, the writing is overwrought: in word choice, in syntax, in how it handles characters with unique ways of speaking… All of these together conspire to make most lines awkward, many lines slow to read, and a number of lines literally incomprehensible; the text is simply too garbled. Sometimes, in its effort to use complex vocabulary, the translation simply misuses a word. Translation is hard, and I will grant that this team did a very good job of the most essential point of it: making certain that the thread of the plot could be followed, line to line. But this translation falls short in many ways that are almost as important, and was simply unpleasant to read as a result. I commend the team who worked on it for their effort; I fully understand that it’s a massive amount of underappreciated work to translate a VN. I hope the team is able to take this as constructive criticism, to improve their next project: they need to rein in the language, and they desperately need QC. 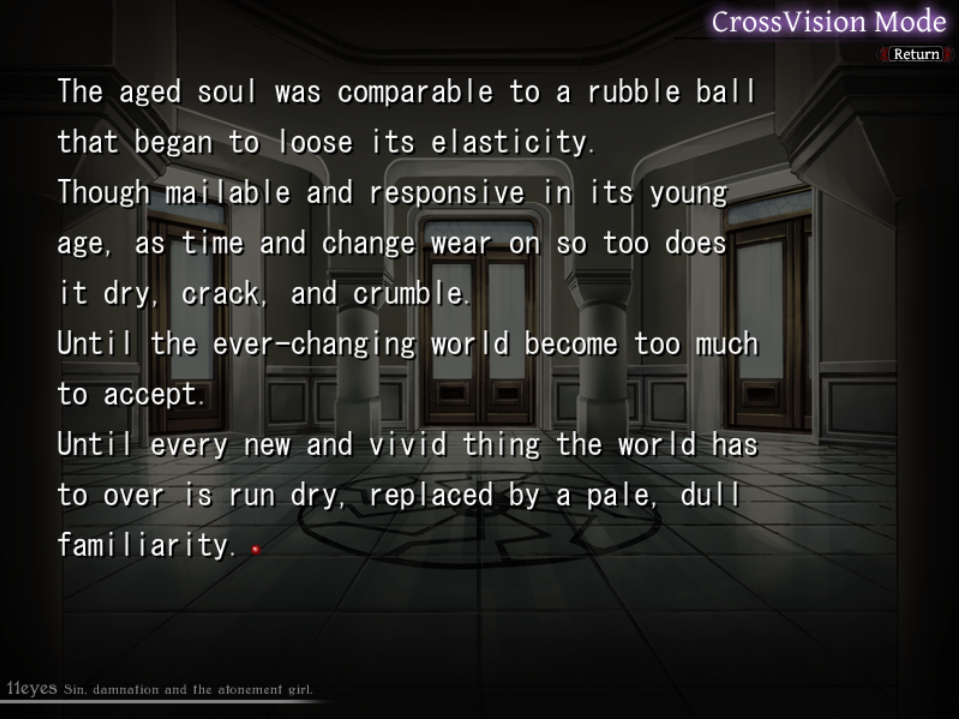 So, what else is there to talk about… The music is good. I didn’t go out of my way to get the soundtrack to listen to separately, which I actually usually do with VNs, but I didn’t mind it at all. The tracks are pleasant and well-used. The background art is generally rather bland, but the character art is solid, in both sprites and CGs. The game has H scenes; they’re fine, although Yukiko’s in particular felt rather artificial, as I mentioned earlier.

All in all, 11eyes was an okay read. The game was good, but not great, in most areas, and I particularly enjoyed the main plot, the Cross Vision scenes, and Kukuri’s after-story. But the game’s problems bothered me a lot more than I would have expected. The lack of route differentiation, the obnoxious protagonist, and the translation all hurt the experience a lot, and in the end left me feeling more glad that I was done reading it than glad that I had read it.

+ The plot is solid and the story is well-told.

+ The Cross Vision system is a novel and effective storytelling mechanism.

- Has routes, but basically no route differentiation: once you've seen one route, you've seen them all.

- The translation is awkwardly-written and rife with typos.