There are quite a few myths of the writer – there’s the myth of the lone genius, who spends all his time cooking up ideas at home and never speaks to anyone; there’s the myth of the labourer, who wakes up every day at 7AM and writes at least 5,000 words before lunch (only to scrap 4,999 of them); there’s the myth of the chronicler, who spends all day systematically observing and talking to people and analyzing each and every situation to come up with a thoughtful account of modern times in their writings. If you are a writer or know any, you’ll probably find all these myths frivolous at best: writing is a job like any other (although even the notion of “job like any other” is also idealized when it comes to the myth of the labourer). Dialogue: A Writer’s Story is probably the best depiction of what it’s like to be a writer you’ll ever find in games.

This British game developed by Tea-Powered Games offers a very different experience compared to your standard visual novel fare. You follow Lucille as she struggles to write her second book after her first novel, Mosaic, achieved underwhelming results and, for the book to be finished, you have to balance opinions from your family, your neighbours and even your own characters as they show up to talk to you about the novel and help you make decisions regarding its direction and themes. 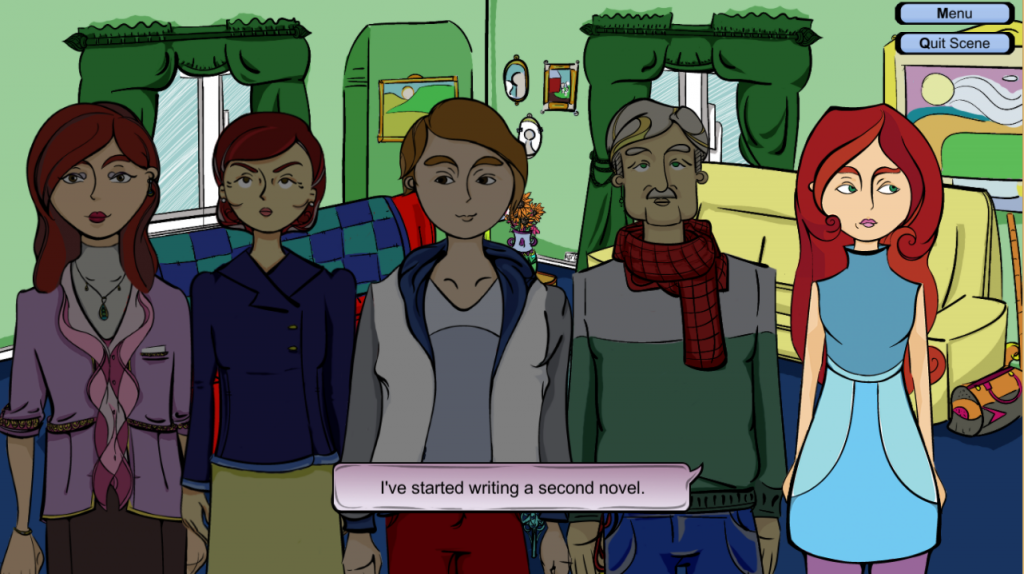 Her daily life consists of working from home for an online magazine, interacting with people around her, and writing her novel almost on the side, a reality known to most writers. That leaves to you the task of more or less managing her free time – because that’s when she can think of the novel – in the form of a hub from which you can go to the next scene, select extra scenes to play, and manage her inventory.

There are three types of scenes: the first is a dialogue between Lucille and one or more characters, like the picture above. You’ll often choose what Lucille says next from coloured options, each colour representing a tone or an intention: red for straightforward, aggressive or sarcastic answers, yellow for inquisitive or prudent, and green for sympathetic or conceding. The choices are timed and you’ll often be able to not say anything at all by choosing a thought (represented by a purple thought balloon). The second type… it’s easier to think about them as dungeons in a roguelike game, except you explore them via hypertext. It’s a conversation divided in panels with a piece of dialogue in which some words or phrases are highlithed. You can click on them to unlock more panels or activate a Thought or Perspective to highlight different words in that panel and, thus, unlock yet more panels. Thoughts are topics about which Lucille thinks while talking and are specific to each scene, whereas Perspectives are mantained across multiple conversations. 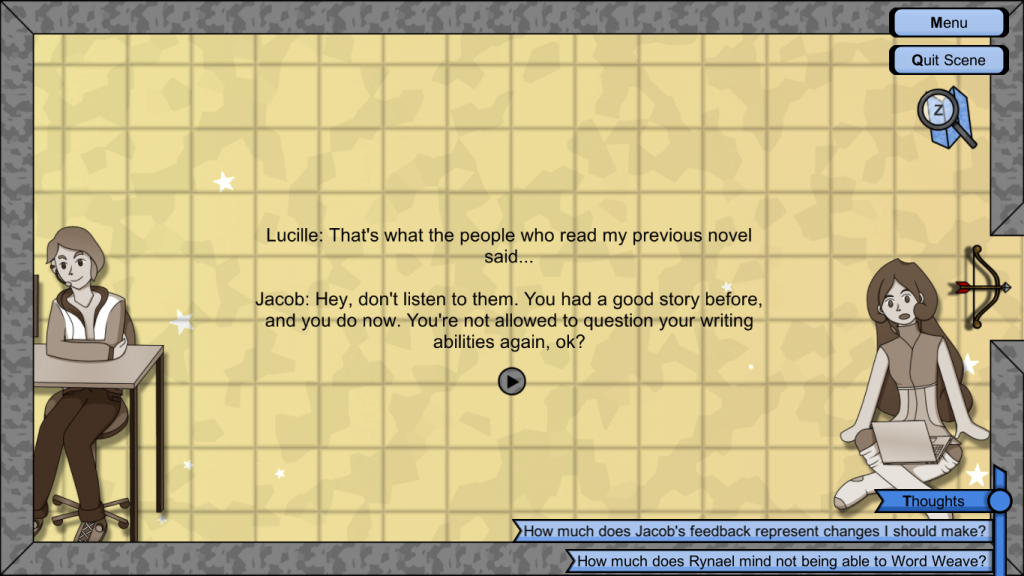 The third type of scene are emails. Lucille will sometimes receive messages from her family or friends and you can choose, to a limited extent, how she’ll reply. By doing so, you unlock extra or main scenes. That’s the gist of it: each scene directly or indirectly helps Lucille write her novel and you’ll be aided by the “items” in her inventory: equipping Focuses help you understand people’s reactions better or get more approval points in scenes of the first kind, Perspectives help unlock extra panels in the roguelike dungeon scenes, Topics are, well, topics Lucille can bring up to learn more about other characters, and Character Biographies help you know what each character likes and dislikes.

Dialogue, of course, being about how to write, questions itself and you about how to behave in a conversation, what sort of person you like to talk to and what’s the nature of conversations. The game’s at its best when a certain entity appears after some scenes and talks to you directly about what just happened. It’ll talk to you in game terms (“I see you’ve selected many red statements. Why is that?”) and will question your behaviour as a player, adding an extra layer of significance that is very welcomed in a game about creating and relating characters to readers. 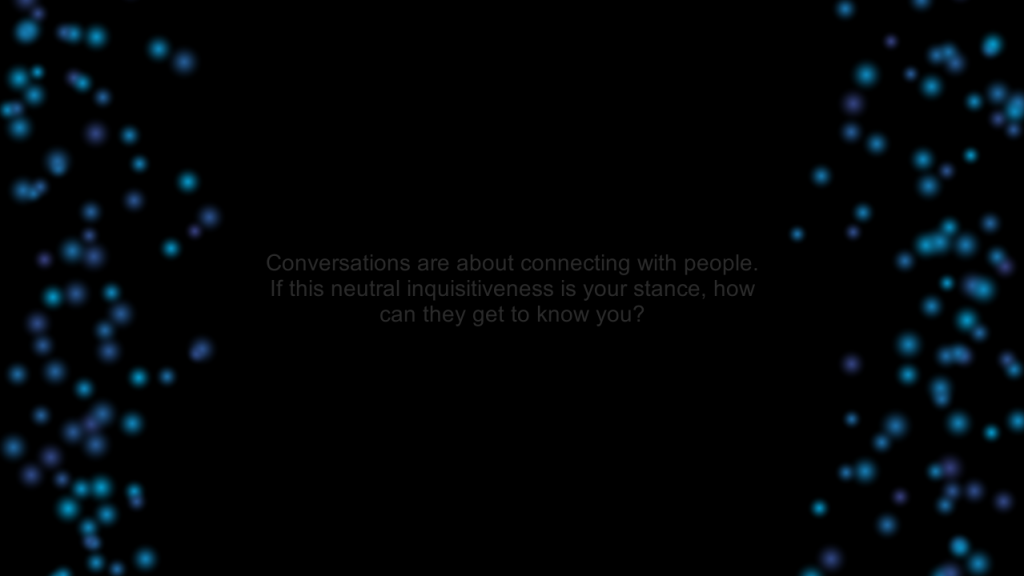 The story mostly deals with how a novel takes shape: how a new neighbour becomes a main reference for a protagonist both in personality and function within the story, how your own struggles translate into the characters’ struggles, how to balance writing and “having a real job”. It’s normally hard for you to know how much you are actually choosing the path of the novel, but that’s probably for the best: the game isn’t about making the best possible story out of the elements around you. It’s about living as Lucille and getting to know her. Indeed, she’s the most mysterious character and it’s very hard to know what she likes in the end.

Dialogue also constantly stresses how much there isn’t any permanently missable content and you can always go back to unlock new scenes and whatnot. Tea Powered Games decided to make a game about the journey, not about the ending or the objectives, which is nice, but ultimately hurt the game system. The efforts towards making everything reachable made its gameplay extremely lenient – this is especially true for the dungeon-like conversations: you can try any Thoughts or Perspectives at any given time and, if it doesn’t returnany results, all you get is a cooldown. This means you can mechanically try every thought and every Perspective at every panel and end up getting everything that scene has to offer without having to actually pay attention to what’s being discussed, undermining the story factor the game was trying to highlight. Likewise, once you learn what each character likes to hear, you’ll most likely select the choice with the correspondent colour without really having to know what Lucille actually said.

That’s not the point, of course – you’re supposed to enjoy the story, but that doesn’t mean you will. By assuming game and story are separate entities within the system, Tea Powered Games made one of them extremely bureaucratic, depending on your tendencies as a player. There’s a conflict going on for the sake of accessibility and that wasn’t necessary: accessibility to content is inversely proportional to responsibility towards the content you get, since you can always track back and get another piece of the story. 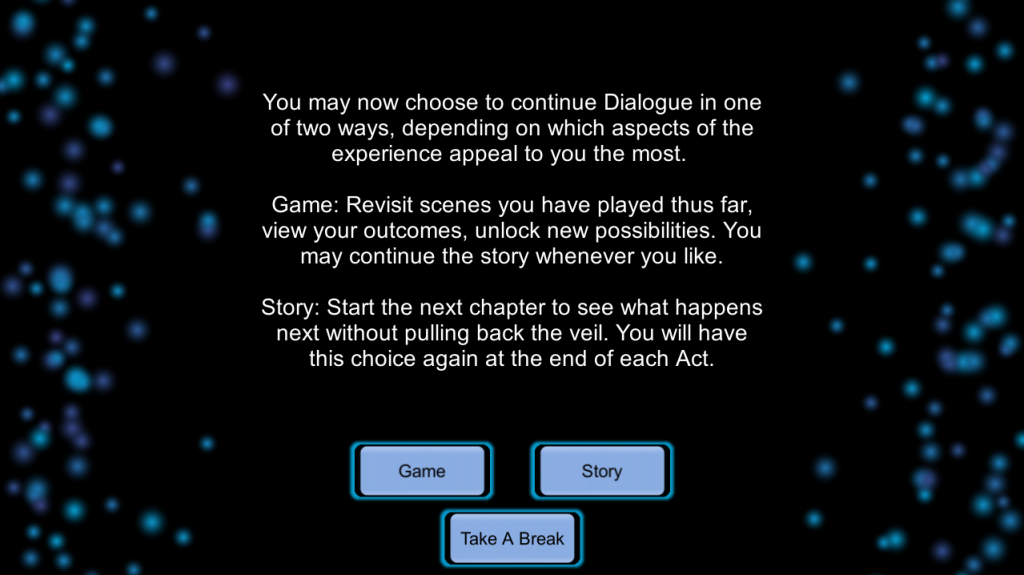 Although the performance issues don’t help either, Dialogue is a good game. It has great characters, even if you don’t like them as people – I’d absolutely hate to have Adrian as a neighbour and you’ll probably feel the same, but he’s a great reference for Lucille. It’s also good news for voice acting in English: the game’s fully voiced and the acting is one of the highlights of the game. Koldana’s voice is particularly sweet and I could listen to it for hours on end, as in fact I did. However, the game could have been more bold and traded making all content reachable for more contingency, allowing the nature of dialogue to be explored more fruitfully.

The review copy was kindly provided by Tea-Powered Games

Update: Tea-Powered Games published a piece about success and failure in games and what was their approach in Dialogue, using our review as counterpoint. It’s definitely a great read! Here’s the link.

+ Great depiction of a writer

- Bureaucratic gameplay or story, depending on what kind of person you are