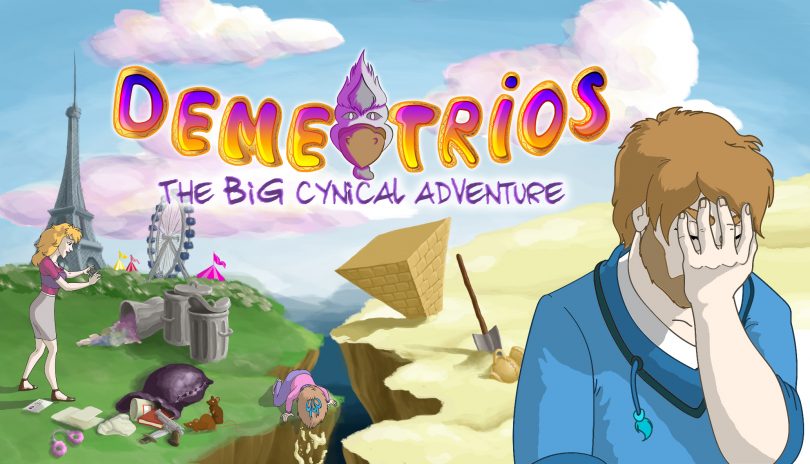 Let’s get one thing out of the way – I’m old. Okay, not geezer old, but I’m old enough to remember a time when point-and-click adventure games were all the rage in computer games. Monkey Island, the King’s Quest Series, Grim Fandango? I’ve played them and loved them. So when COWCAT Games’ Demetrios – the BIG Cynical Adventure popped up for a review, our wise-ahead-of-his-years boss came directly to me, knowing that, as the old guy I am, it would remind me of the good old days. I yelled at him to get off my cyberlawn as he gave me the review key. Good times.

Demetrios isn’t a visual novel, but as a PNC adventure game it is story-driven, however you kind of need to use your brains to make progress in the story. The game revolves around our protagonist, one Bjorn Thonen, who runs an antique store in Paris (good setting since the game developer is French) despite having a very un-French name. One night, after a rousing evening of chess in a park (okay, fine, a drunken bender) Thonen is attacked in his own apartment, and a valuable relic that he somehow managed to stumble upon when buying something else has been stolen. Your mission? Figure out who attacked you, why they attacked you, and to get your item back, because you barely have any Euros (French currency, at least until Frexit occurs and they go back to the franc)! 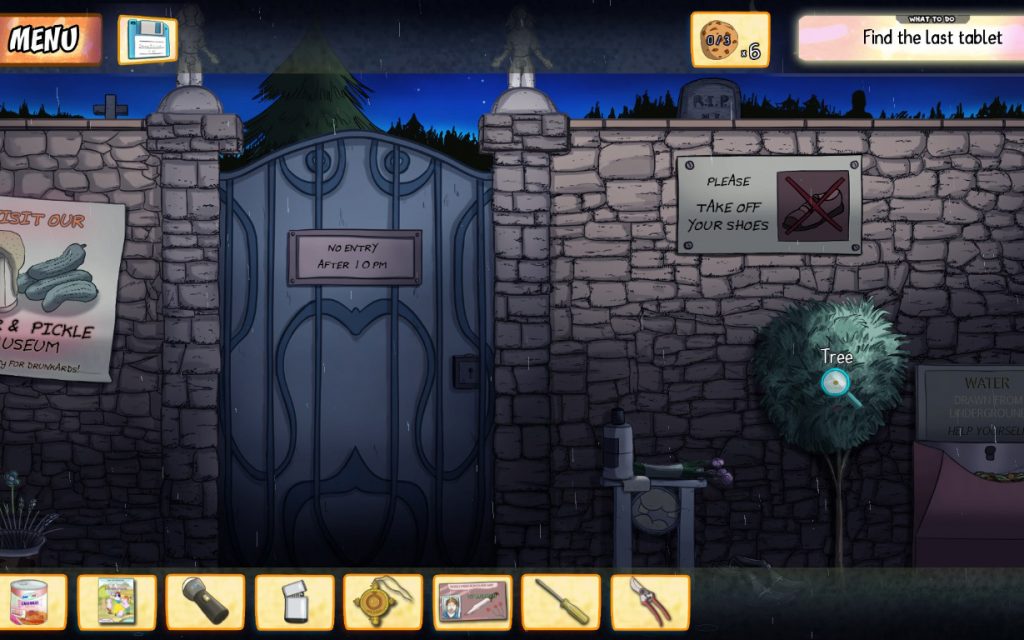 How to go about this endeavor? You search the scenes for useful objects and other clues, and then make use of the objects in your inventory to solve puzzles and advance the story along. You may have to combine different items, and you may find yourself backtracking to retrieve objects used before that become handy once again. There’s a lot of logic involved in it, so be ready to use the old grey matter. As you progress you’ll open more scenes and more puzzles, leading you to more questions and eventually, the answers you seek.

If the logic in the game dictates the need for an educated brain, the humor of the game demands an attitude that’s something a little more sophomoric. Prepare yourself for crude bathroom humor in the original version, amongst other disgusting things. If you’ve watched and enjoyed South Park or Family Guy you’ll be fine, the humor is no worse than your average episode of one of those shows. In the latest edition there is an option to lessen and even remove the potty humor, so if you aren’t into that you can still play the game without some or all of the crudeness. 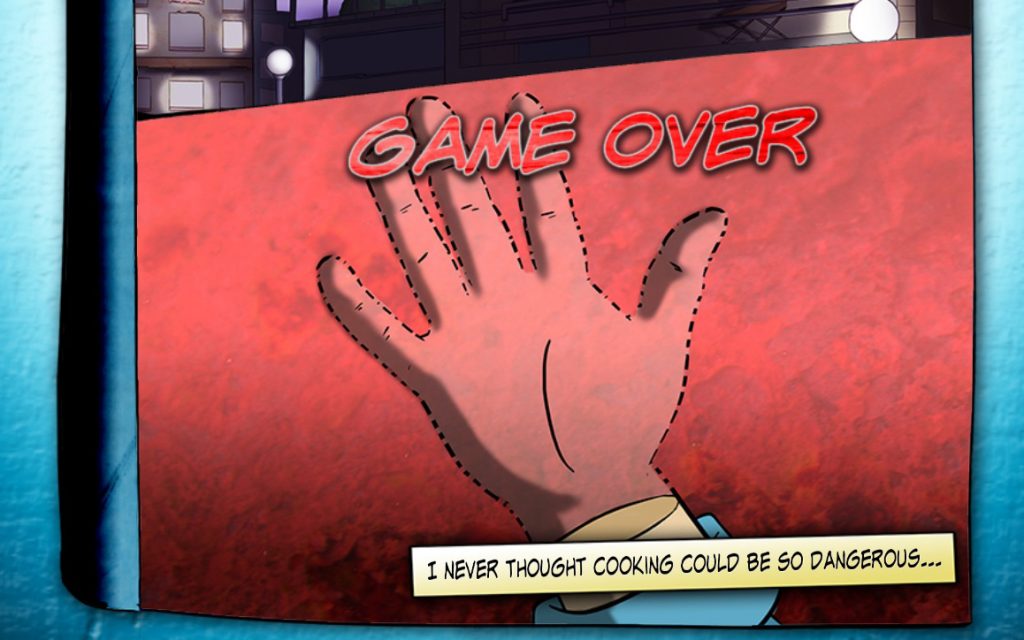 This never happened to Guybrush Threepwood.

One difference between this and older adventure games is that Demetrios takes pride in the many ways you can kill off poor Bjorn. Sierra games (Space Quest, King’s Quest) were annoying in that there were random ways to die that popped up out of nowhere. Lucas Arts games (Monkey Island, Grim Fandango) mostly didn’t allow you to die at all, but you might get stuck on a tricky puzzle. In this game, finding out how to die is half the fun, and you can go back and review a checklist of all of your wonderful demises as well as earn Steam achievements for dying.  As for getting stuck, you can find and eat cookies! Each scene has three hidden cookies to find. Eat a cookie and you’ll get a general hint about the current task at hand. Eat another for the same task and the hint gets more specific, with the third cookie pretty much giving you the solution.

The graphics are sufficiently cartoonish enough so that you can’t take the game that seriously, especially considering the humor for the game. Some of the sardonic comments made by the characters are genuine winners, and the writing is pretty good for what the the game sets out to be. The main drawback would be the lack of any voice acting. Most PNC adventure games these days have voiced characters. The lack of voices doesn’t detract from the game, but it is something that would have made the game stronger overall. 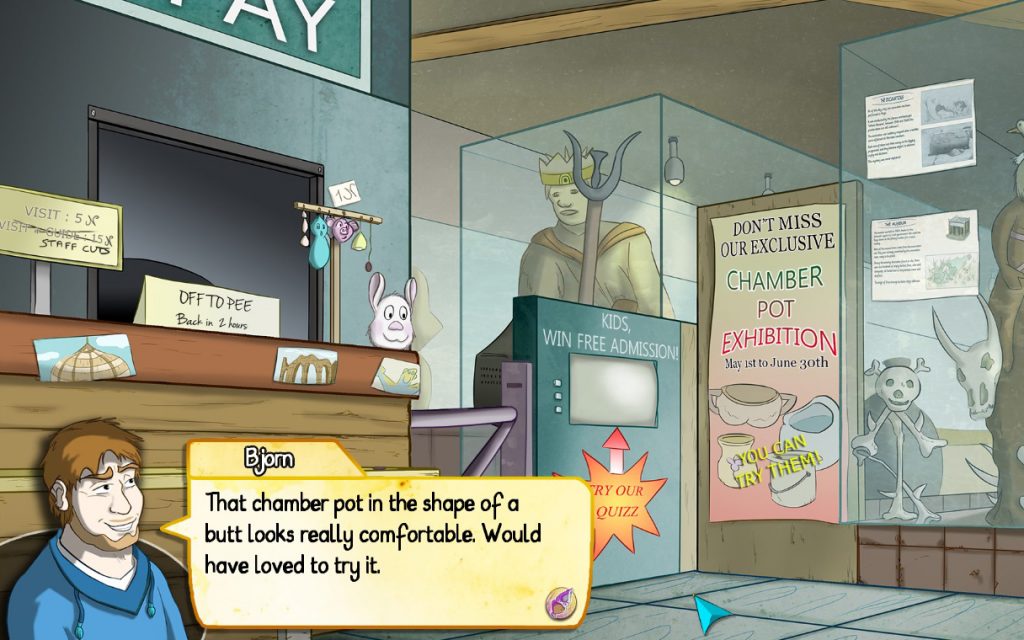 The humor in the game is custom-made, just like that chamber butt pot!

Demetrios – The BIG Cynical Adventure isn’t the type of game that’s out there to break any molds in either gaming or humor. However, for what the game advertises itself as compared to what the game delivers is a very well-done PNC adventure game. It’s worth picking up if you like this particular type of game, especially as it gives the option now of playing it as it was made, or without the crude humor.

You can purchase Demetrios – The BIG Cynical Adventure on Steam.

A Steam key was provided for the purpose of this review. Thanks!

+ Storyline is engaging and keeps interest up.

- Some of the cookies are too damned hard to find.