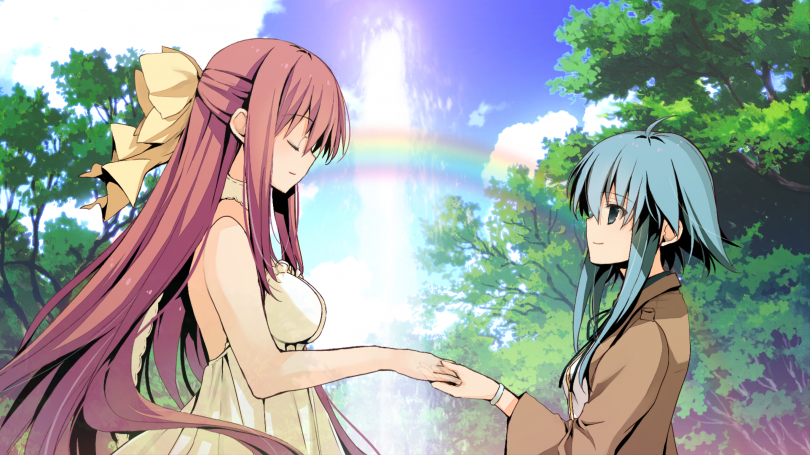 It’s a rare compliment to say that a game is more than the sum of its parts. Unfortunately, when I finished it, I felt like Memory’s Dogma might actually have been less than the sum of its parts. I quite liked the character art. I thought most of the music was great, especially the down-tempo tracks. I even generally really liked the writing quality, at a micro level, in spite of a slew of copy-editing misses and frequent tense inconsistencies in the narration. But, unfortunately, the game fell apart for me when it came down to both the plot and the characters. About a quarter of the way through, the game took a hard right turn from a fascinating hard sci-fi story raising interesting questions about the nature of grief and death in a society where memories can be faithfully recorded and personalities faithfully reproduced, and it transformed into a dime-a-dozen science-fantasy power-trip where the main character gets super powers because the plot necessitates it and goes on to defeat a one-dimensional cackling evil villain with a strong henchman and an army of faceless weakling minions. 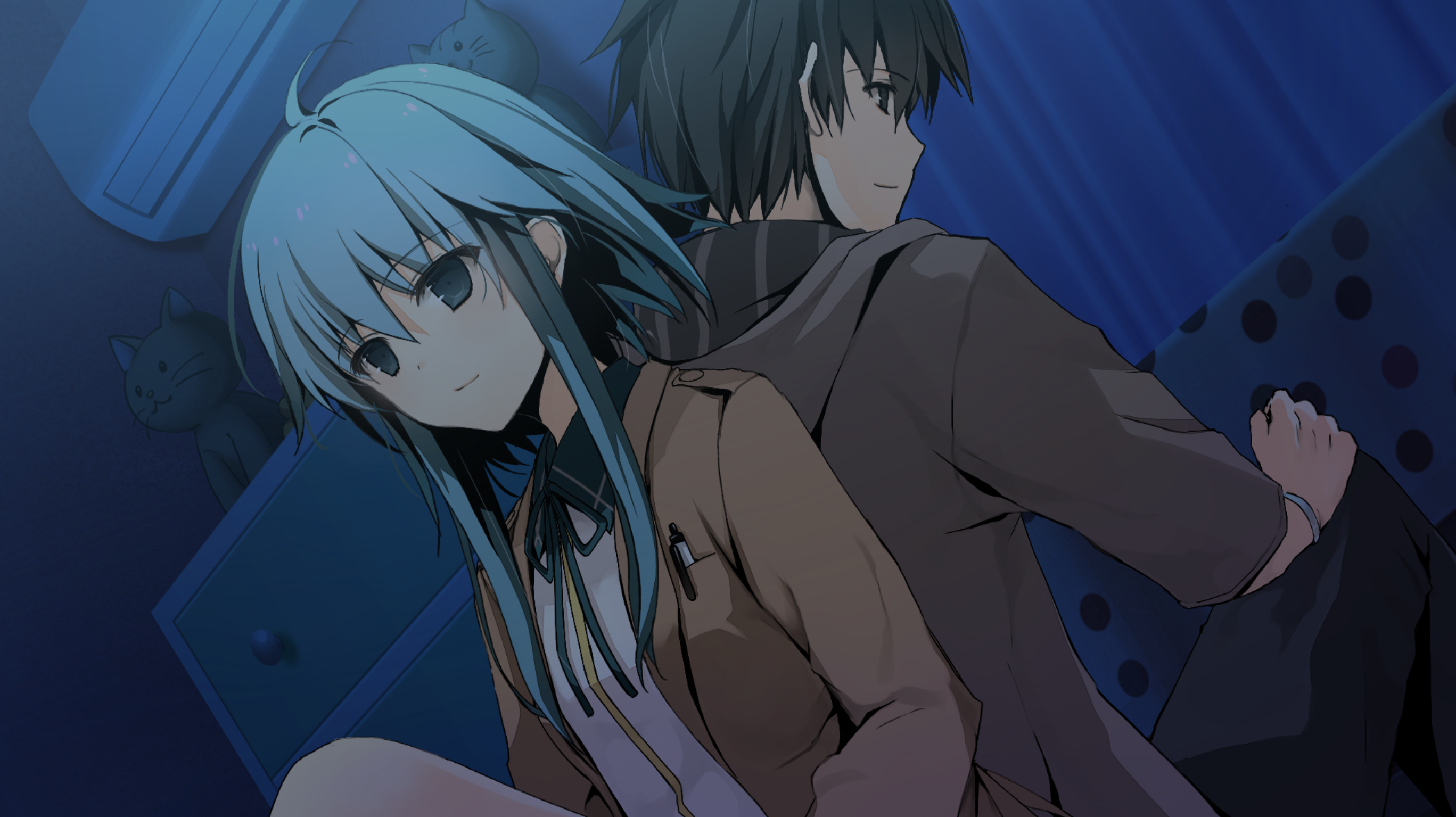 Before I get too deep into this, I want to reiterate the warning at the beginning of the game: the depiction of “fatal errors”, as the disclaimer calls them with its tongue firmly in its cheek, actually does become rather graphic at times, and there was a brief moment near the end of the game where I felt like it was going to be too much for me. For those of you with more hardened stomachs, you’ll probably read the game and think I’m a huge softy, but I doubt I’ll be the only person who gets more than a little disturbed by it at times. That out of the way…

I was in love with this VN right out of the gate. The early parts pulled me in with a good hook and good writing, and the plot kept me engaged with a mystery and a little bit of action. The first character introduced, aside from the protagonist, is quite likable. Kakeru is a rare breed: a male sidekick with positivity, intelligence, complex motivations, and the capability to get things done. He’s a far cry from your typical idiot sidekick, and he anchors the early part of the game, before he unfortunately goes off-camera somewhere around 60-70% through, never to get any further stage time. 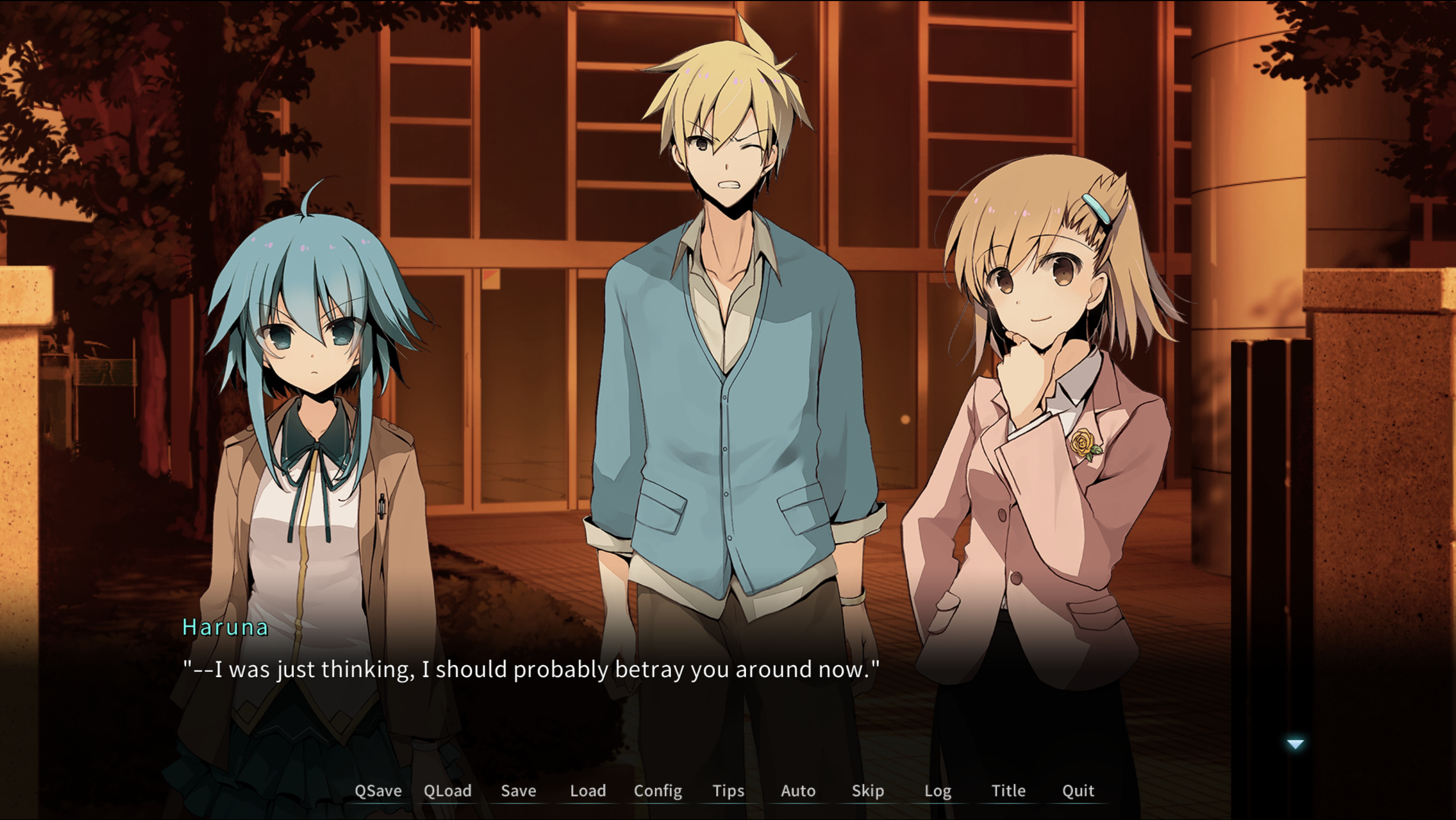 As the story progress, it builds up to the big reveal that you’re actually reading a science-fantasy story complete with handwavey powers, rather than a hard sci-fi story going to great lengths to explain its technology. Normally that’d be fine by me; I’m actually quite fond of science-fantasy stories and handwavey powers, where “magic” is the one-word explanation for most events. However, between the setting and the large amount of detail the writers put in to explain how certain technologies worked in the early game, I was expecting a more thorough explanation than “superpowers” for literally everything that happens in the latter half of the game, and that was somewhat disappointing.

The first sign that things were going in a bad direction was the characters. It felt like Memory’s Dogma was intentionally introducing steadily stranger characters as it went on, perhaps as a way to foreshadow the big reveal. Some of the more normal characters, like the aforementioned sidekick Kakeru, or Haruna, the cute and questionably-reliable police officer (who could also easily pass for Railgun), were fun and interesting. But more often, the characters were just kind of… there. Not especially appealing, at best inoffensive. Reina, the heroine, was a prototypical eccentric young genius girl character, but for all that she was reasonably well-rounded and likable. However, Sorano, the third-most important character in the game, didn’t leave much of an impression despite being central to the story. Akane and Ema were straight-up boring, perhaps in part because of their ludicrous outfits, which also served as the harbinger that there was chuuni on the horizon. By the time Mikoto the miko (yes, there’s a miko named Mikoto, and, no, they didn’t translate “miko” in the English text) really appeared on the scene, I’d already mostly abandoned any expectations for the game to return to a more enjoyable direction, but her big announcements basically ripped to shreds any hope I had for the plot being salvaged. From there on, the story coasted to a lackluster, predictable ending. 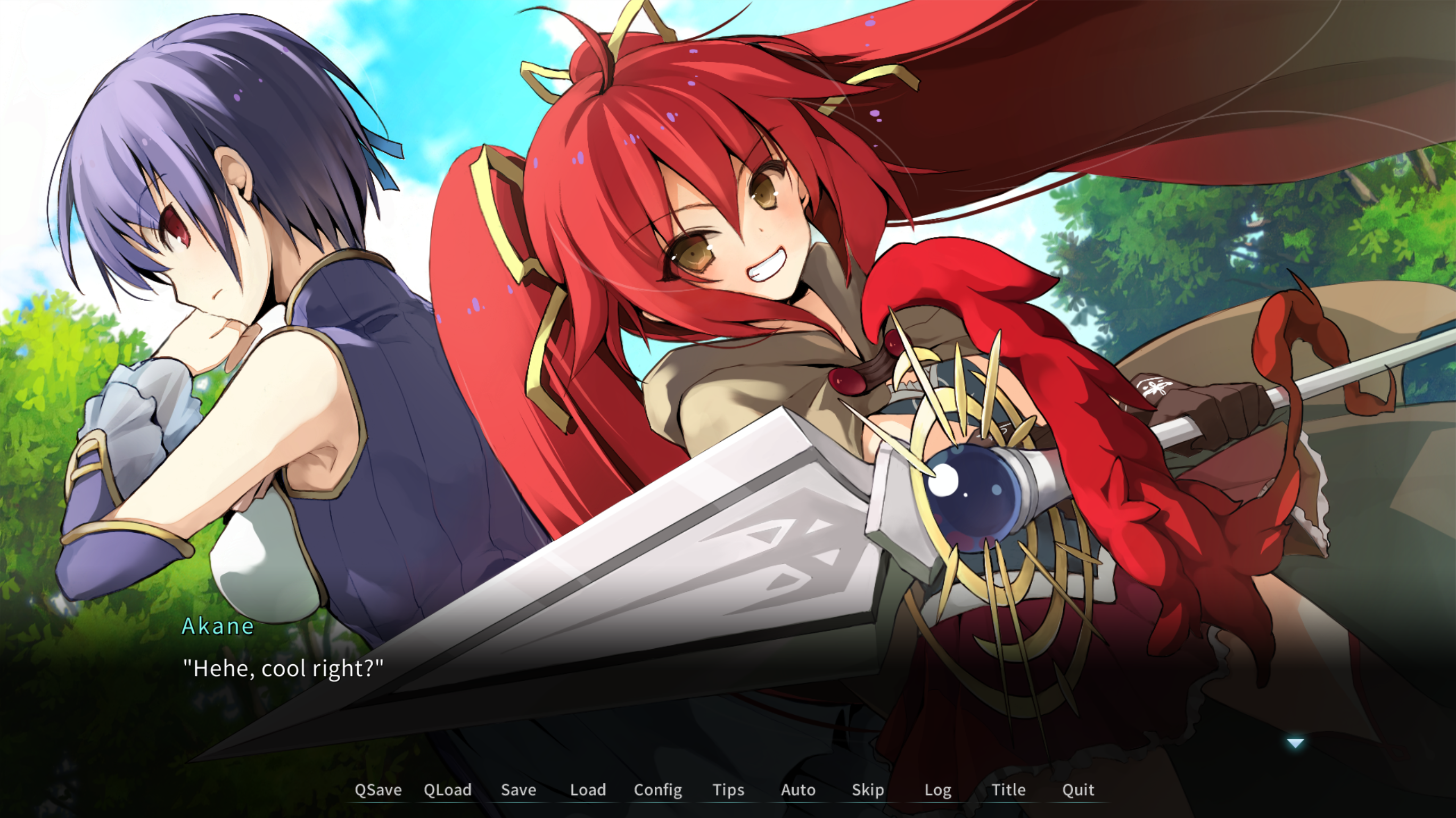 The least enjoyable element of this VN, for me, was the villains. The bad guys were a mishmash of boring cookie-cutter tropes: the crazy dude with the sword for an arm who just wants to fight strong people; the cackling evil supervillain who wants to rule the world for paper-thin reasons; and the faceless minions who inexplicably follow the supervillain’s every instruction. A good villain is the foil to your heroes: heroes don’t shine without a good enemy to face off against. Memory’s Dogma didn’t have especially strong heroes, either, but the villains were so flat and uninteresting that they really dulled the entire experience.

I also felt like the choices in this game, while it has many, were more an illusion of choice. There are plenty of instant bad endings, but as far as I can tell, only one non-bad ending, and the plethora of choices that don’t lead to instant bad endings don’t seem to cause anything other than momentary text changes. There aren’t multiple “routes” per se – the game is fairly close to a kinetic novel. For what it’s worth, I don’t consider this a point against it: I’ve found recently that I have a tendency to enjoy kinetic novels, sometimes more so than route-based VNs. But people who are diehards for routes and multiple heroines will not find what they’re looking for here, unless there’s another route I missed somewhere, which seems unlikely given that I apparently did unlock all the music and CGs and got a new title screen. 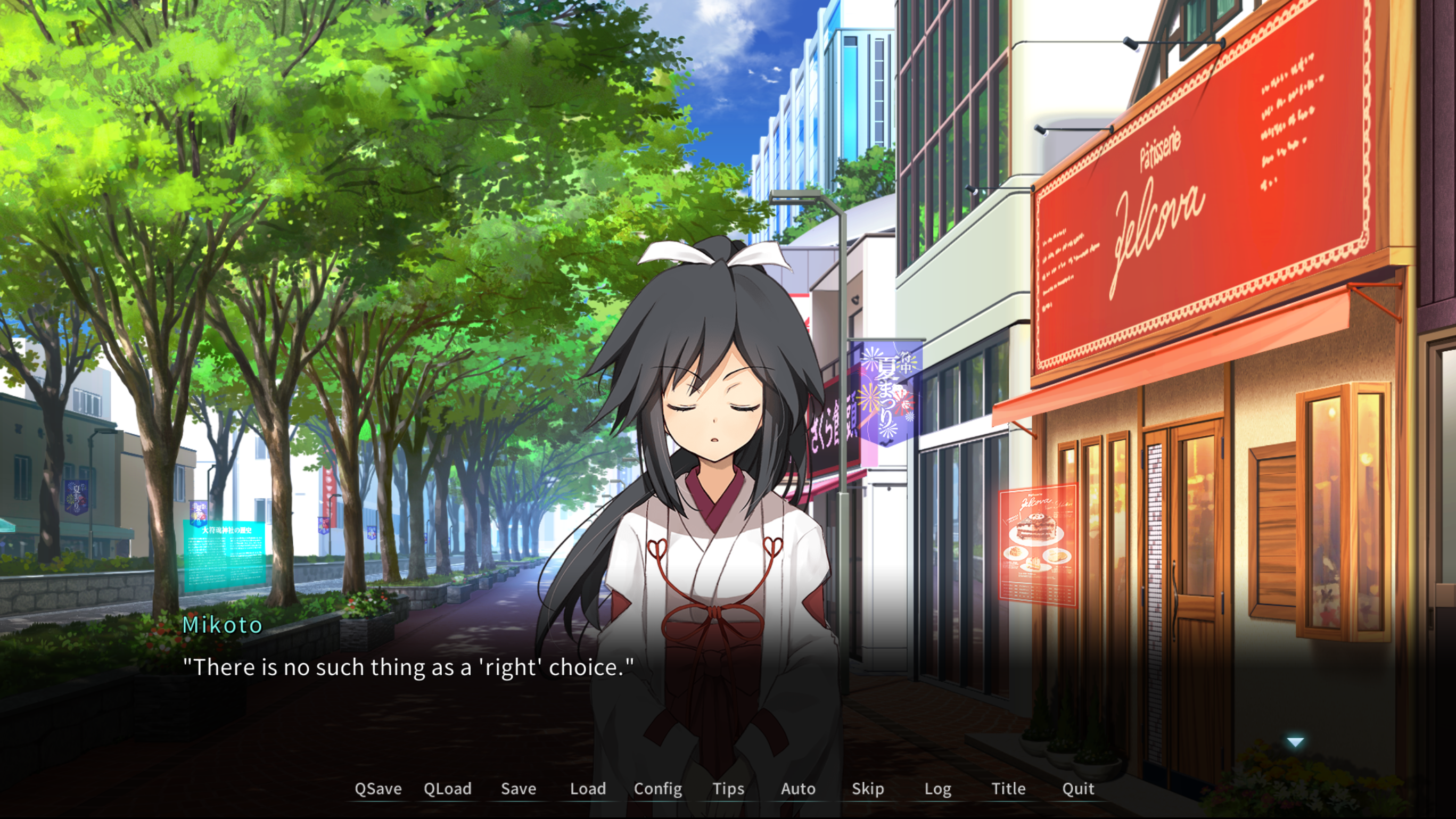 I’m being really hard on it, but Memory’s Dogma did have its moments. I really loved the first ~20% of it: if they’d kept telling a meditative story about the pain of saying goodbye to your loved ones, while knowing with absolute certainty that you’re on a very precise clock to make your peace before they disappear, I’d have been all over that. That’s interesting, and no, I don’t really care if it’s been done before (what hasn’t?), because it was being done pretty well here and I was enjoying it. And on another positive note, I’ll add that the game often did a great job of nailing a mood, between art, music, and voice acting. If you’re like me, while you don’t actually shout at the characters in a good horror story, at least in your head you’re thinking “Oh shit oh shit oh shit, no, this is not good, don’t open that door, what’s wrong with you.” I definitely got one of those moments while playing Memory’s Dogma, and I thoroughly enjoyed that. And I also really enjoyed the writing most of the time, even though it was more than a bit uneven.

All told, when I was done, it felt like I’d finished reading a mindless chuunige with mostly forgettable characters. The game ended up a lot weaker than it started, and while first impressions are important, with a story, that last impression is even more important, and Memory’s Dogma didn’t deliver. But try not to get hyped up by the excellent intro, and try to ignore the copy-editing mistakes, and you’ll still be in for a passable read with a decent soundtrack.

A review copy was kindly provided by Sekai Project. This review was completed using a pre-release version of the game, so some elements may have changed by the time of the final release. Buy Memory’s Dogma on Steam.

- Plot goes from engaging to boring halfway through and coasts to an lackluster ending.

- Leaves lots of loose threads, including especially the background and fate of many characters.