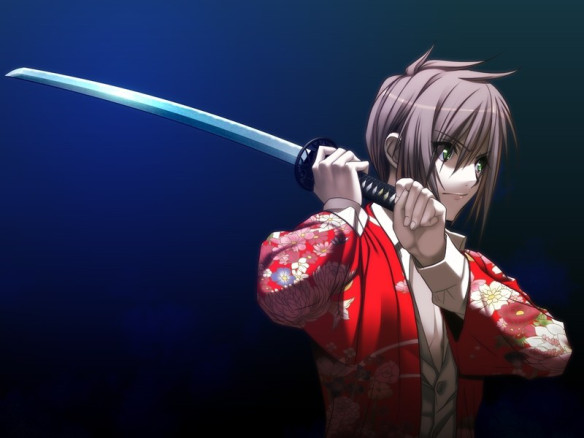 To be perfectly honest, as someone whose favorite VN is Narahara Ittetsu’s Soukou Akki Muramasa, I really should’ve read this game sooner, considering it’s by the same author. Maybe a part of me dismissed it as potentially inferior, expecting it to even be disappointing on a certain level. Luckily, disappointing it was not — painfully short though it may be, Hanachirasu is Narahara’s work through and through; the same heart beating beneath a slightly different shell.

Hanachirasu takes place in a world where the development of nuclear weaponry failed, so no atomic bombs were ever dropped on Hiroshima and Nagasaki. This led history and the war to take an entirely different course, and ultimately led to the birth of a Tokyo that’s no longer Japan’s capital, is surrounded by a colossal wall, and is basically a dystopian den where firearms are banned and people fight to the death with swords as a result of a certain leader’s attempt to restore the Japanese spirit and eradicate western influence. The game goes into more detail with its infodumps though, so I won’t say too much here.

Enter Takeda Akane, a ruthless swordsman in a crimson kimono who serves