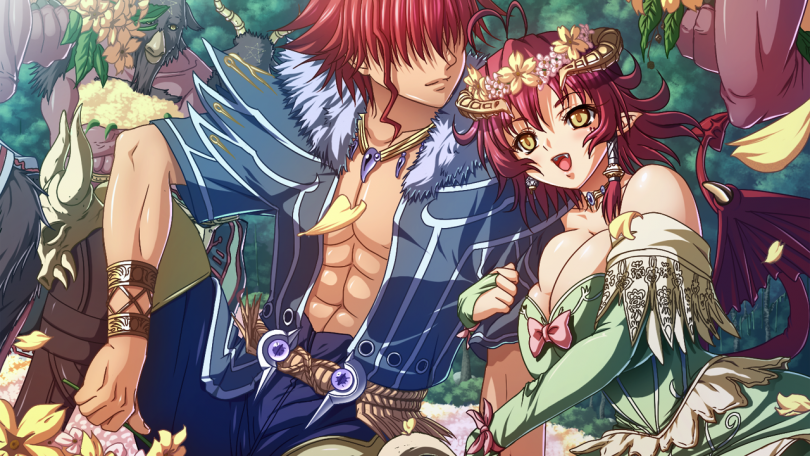 Funbag Fantasy, as you can probably guess from the title, is unapologetic pornography reveling in huge-breasted cartoon women. If you’re not at least a bit curious about that, you should probably skip right over this one without a backward glance. That said, if you’re either looking forward to or willing to put up with a veritable mountain of sex scenes, this game is actually pretty decent.

The reason I say that is that, unexpectedly, I found the plot pretty interesting. About a third of the way through the game, there is a choice which forks off to one of the two major plot lines. The game also has a few other choices at various times which lead to several brief, heroine-specific side endings. Of the two major arcs, one leads to an ending with the main heroine, Shamsiel, and the other leads to a harem ending. In addition to resolving loose threads, the two plot arcs reveal more information about the background of various major characters, especially the main character. There’s absolutely no need for a guide when playing this game, even if you’re looking to collect all the CGs and endings, since the choices are few and straightforward. The game is also structured so that it isn’t a particularly better experience to choose one route or another first, and although the heroine-specific side endings can safely be skipped without missing much (aside from a few cute non-sex CGs, a rarity), you’ll want to read both major plot lines through to their intended ending to really get the whole story. 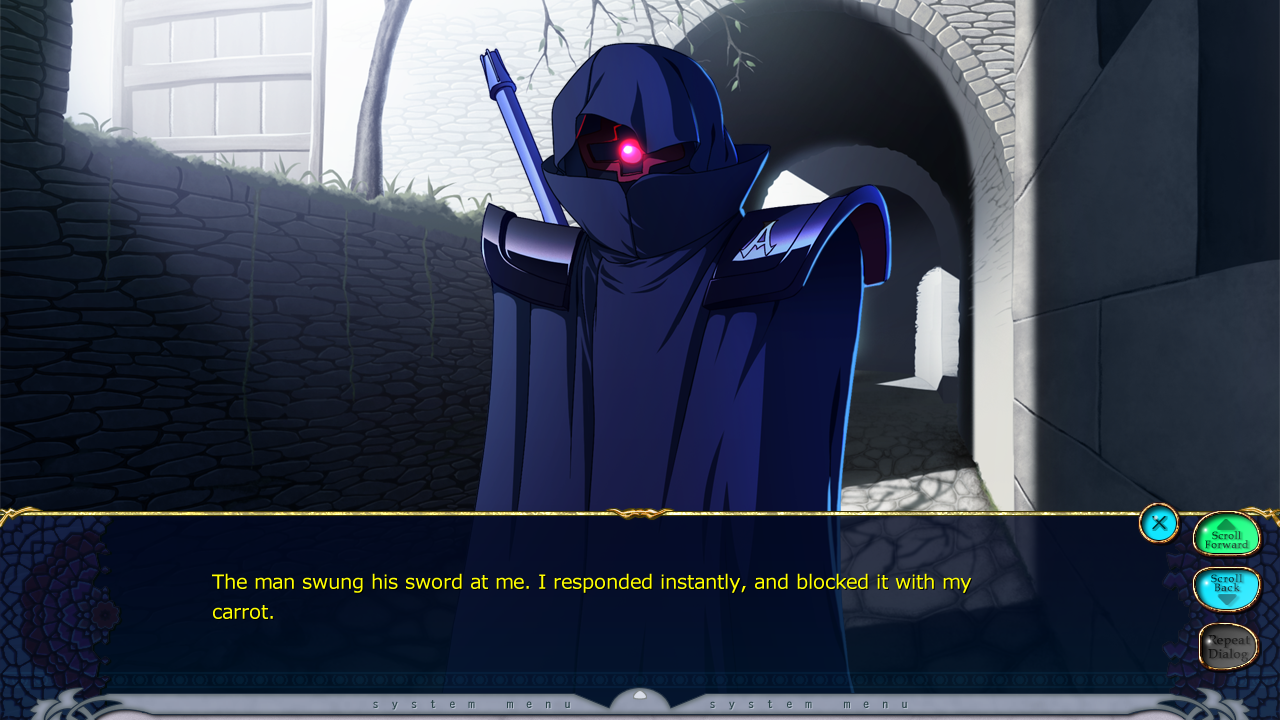 The characters are more of a mixed bag: Shamsiel makes an excellent main heroine, fun and interesting, but most of the rest I could take or leave. Gladys looked to be an abnormally strong, independent heroine in her early appearances, but became a lot weaker after her story arc ended. Isis’s tsundere act was somewhat more charming than that trope usually is, since she maintained a pretty saucy attitude towards the protagonist all the way through her arc. I found the other three heroines mostly boring. Along with Shamsiel, the protagonist, Lute, ended up being the other big draw for the game, which in my limited experience is unusual for a nukige. In some ways, he’s more like a chuunige protagonist than a nukige protagonist, fighting his way through the story, relying on some unique powers, abnormal good luck, and a deceptively deep personality. The storytelling does a good job with him, shaping the player’s image by showing him in action, rather than by dishing out info dumps.

The game’s also pretty damn funny at times. I haven’t played a lot of nukige, but the ones I’ve enjoyed had a strong sense of humor, and this one definitely met that criterion. A lot of the content of any nukige is pretty ludicrous; it helps when the game encourages you to laugh along with it, rather than merely at it. 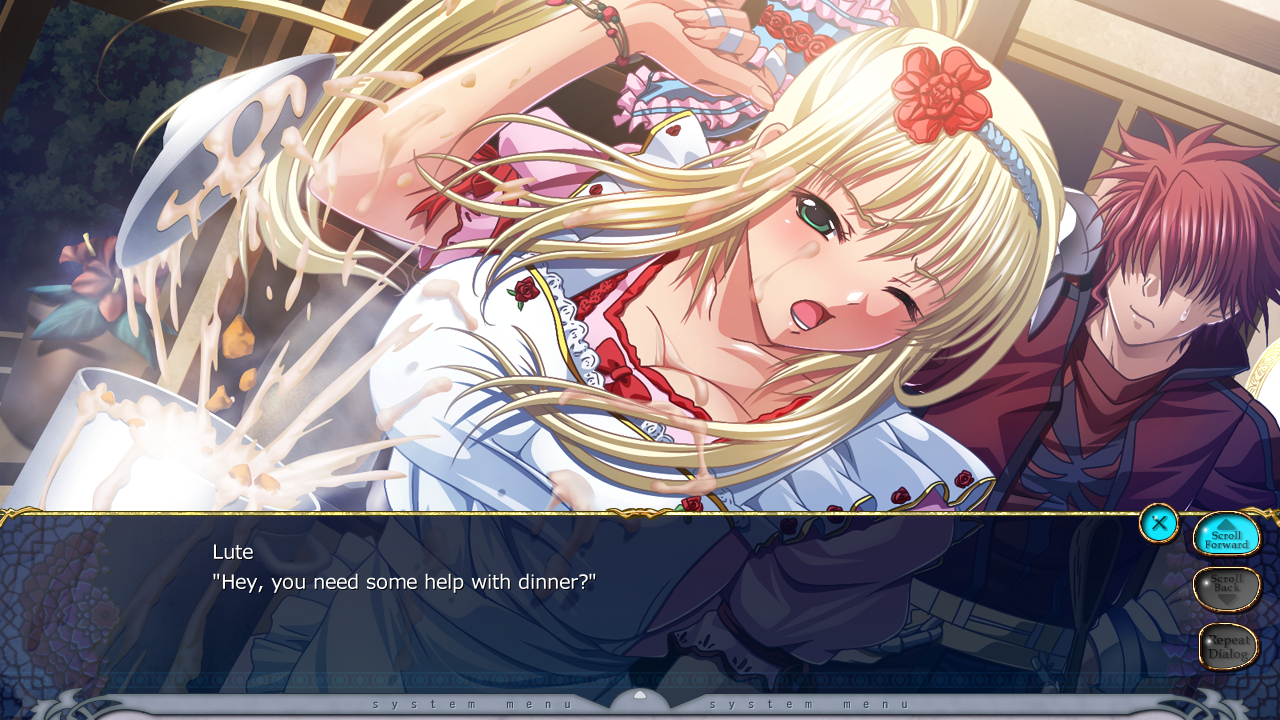 The pacing of the game is decent when it’s balancing those three elements, plot development, character development, and comic relief, but the sex scenes can come really fast and furious at times, and as you’d expect from a nukige, the game is absolutely chock full of sex scenes. Sometimes I’d hit one and just not be in the mood for it, so there were times that I simply flipped through those scenes to see what happened next. 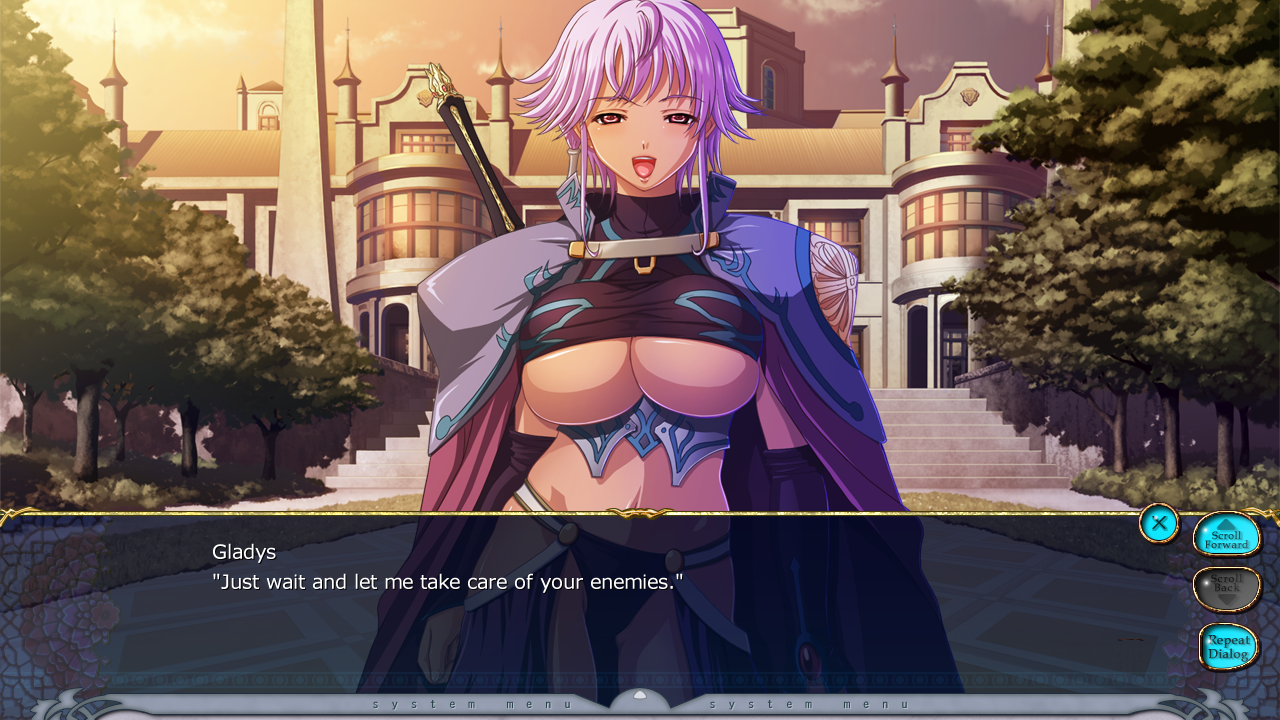 On the graphics side of things, the art took a little getting used to for me, and of course the proportions of every female in the game are absurd, but I found it a nice change of pace from your typical cutesy, moe, younger character art. The game also took advantage of its setting and plot to get a lot of variety in the male character sprites: there’s the insufferable chubby prince Bobon; the pretty-boy knight Motaire (his name a pun that, alas, did not survive translation); the Burger King mascot doppelganger King Hagel; the Prime Minister, who bears a passing resemblance to Saruman the White; and the three old generals, who look like, well, old generals.

I didn’t find the background art particularly remarkable, but it did establish the feudal setting nicely. Similarly, the soundtrack is average, but thematically appropriate; nothing to write home about, but it gets the job done. There were a handful of standout tracks, especially the atmospheric “Forest Exploration” and the “Succubus Theme”. 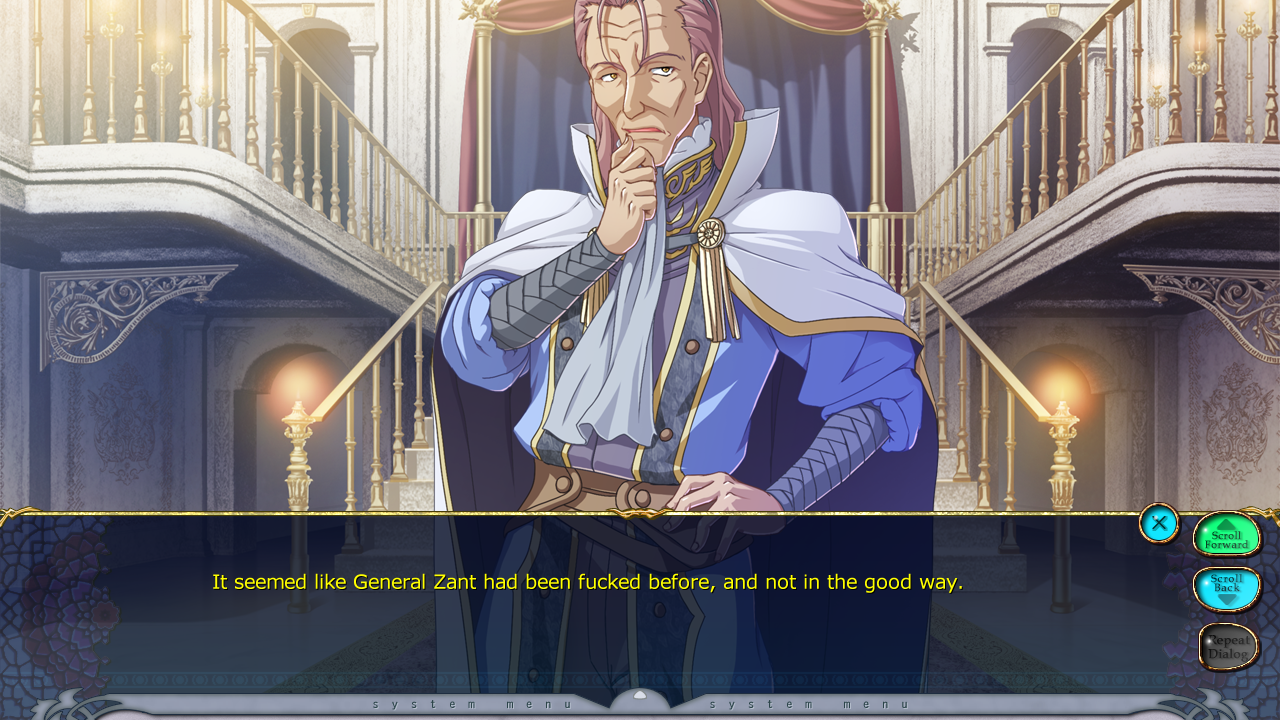 The localization needs a good proofread, but that’s par for the course on VN releases these days. That said, I found it well-written, and I quite enjoyed the text. It achieves a nice balance of usually keeping the language appropriate to the feudal setting and the characters, while not going overboard in a way that would hurt the delivery and timing of its comedy. All in all, a job well done, especially in a nukige where that kind of effort is likely to go largely unappreciated.

All told, this game is probably as solid an experience as you’ll find in a nukige. If you’re looking for a game with a lot of sex and a decent plot, look no further: pick up Funbag Fantasy.

+ Solid plot, with a good sense of humor.

+ An abnormally interesting main character, for a nukige.

- The sex scenes can get pretty exhausting if you don't have the stamina to keep up.

- Some of the main characters are pretty bland.