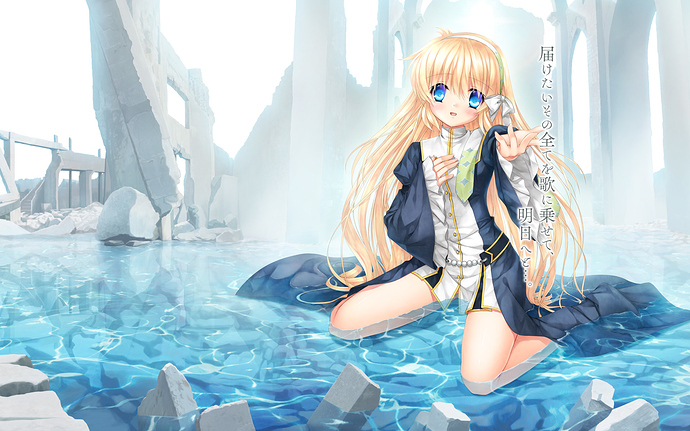 Now we can finally and properly congratulate Key for their 15th birthday! Harmonia, the cake that arrived some three years late to the party, is out to celebrate Kanon, Air, Clannad, planetarian, Little Busters, Rewrite and Angel Beats! (derivatives included) and honor their tradition of moving, tearjerking stories. It is a short kinetic novel about the nature of emotion, the future we want for those we cherish and what it is that bonds us together, be it as family, as lovers or as mankind. In short, you could say Harmonia is an exercise about Key itself and the values they have continuously employed and dissected in their works.

A boy wakes up in a barren world. All he knows is that he is a mechanical counterpart to a human, a Phiroid who has forgotten emotions but retains the knowledge from ages prior and his purpose: to make humans happy. The boy understands he needs to learn emotions again to fulfill this purpose, so he sets out to find humans he can serve.

The Phiroid can’t understand why the world has devolved so much since the time he went to “sleep” in a factory and, without any energy supply left in the abandoned signs of human activity he finds, he collapses in the middle of an empty road. 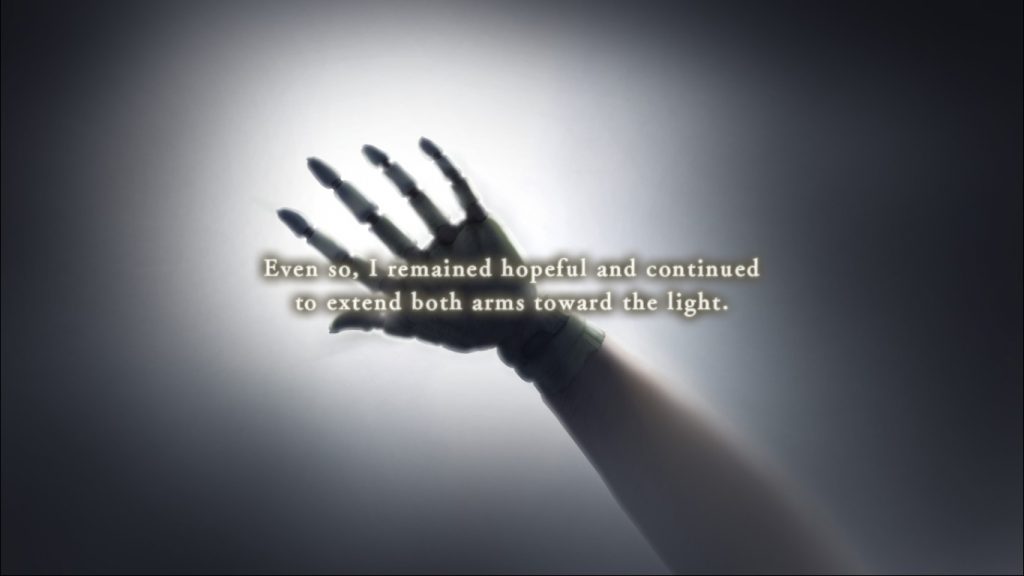 He wakes up in a church, having been saved by Shiona, a girl who describes feelings in a way the robot doesn’t understand at all and loves to sing a specific melody that, the boy later finds out, is his brother’s memento: it makes her feel “orange”. Since the boy doesn’t know his own name, Shiona gives him one – Rei – and is happy enough to take care of him. Rei, though, being a Phiroid, can’t stand being idle or not helping a human, so he begs to help her somehow. This eventually leads him to a broken music box that contains the melody Shiona sings, so Rei decides to fix it so he can feel “orange”, too. In order to do so, he has to interact with the townspeople, especially Madd, a “red and fiery” person, according to Shiona, who runs the small town’s general store; and a “blue girl” named Tipi, the librarian. From then on, Rei sets out to make each of them smile.

So Harmonia is more or less divided in two parts. The first one, from chapters one through six, is about Rei running around trying to make people happy, trying to help them and be useful to them. Don’t expect straightforward answers here about Rei’s past or reasons why what is happening is happening – the story behaves somewhat like a fairytale in which what you see is what you get. Rei learns about emotions from the characters, since each one is a monolith of a certain given emotion – Madd seems to be always angry (hence “red”), even when displaying some modicum of complicity towards Shiona: the gap between the display of an emotion and the actual emotion confuses Rei; Tipi is always sad and crying, so she grows attached to Rei very easily as he visits the library every day to learn about the town or how a music box works. 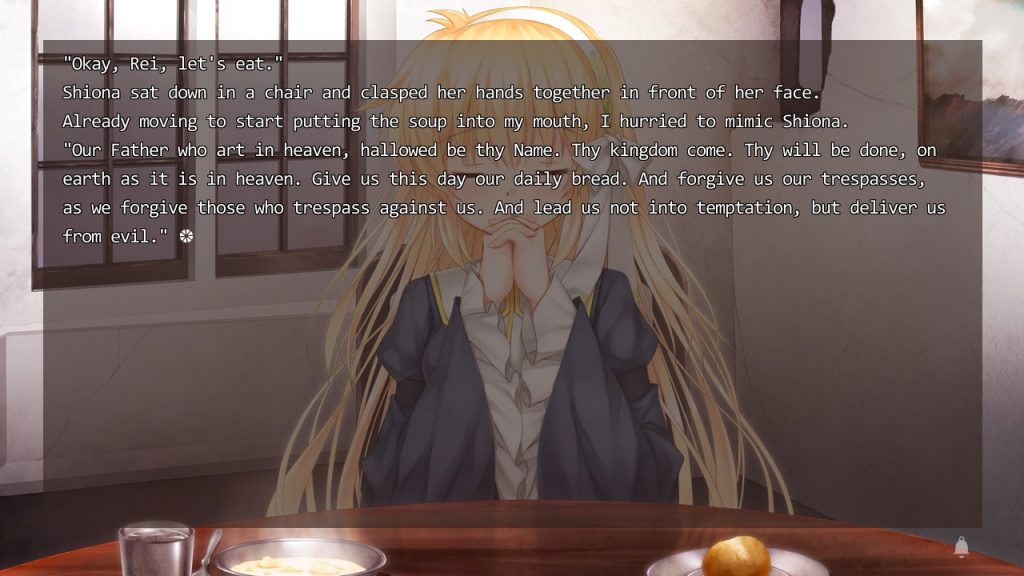 You may find traces of other Key characters in Shiona, Madd and Tipi. For example, it’s as if CLANNAD’s Kotomi lives on through Tipi in a strange planetarian‘s Reverie setting – she’s always in the library, can’t stop being sad about something and seems unable to let go of her job as a librarian, in which she excels – but it’s a job that no one forces her to do. Rather, it’s more like a natural consequence of her always being sad and alone in that place. But Tipi isn’t a homage to any character – it’s just that she seems to stem from the same workshop, was built on the same philosophy on how characters work.

These mechanical repetitions within the story, clouding the characters’ past in mystery while discussing what each emotion really is and why we feel them, build up the relationship between Rei and those around him, showing us how affection can work differently if it comes from an “orange” or a “blue” person, how a simple smile can convey many emotions at once (Itaru Hinoue, the artist, was clever enough to give the characters, especially Shiona, many slightly different expressions that make us feel confused about what they might be feeling at that moment), how there are many layers between what we feel and what we show. Due to this “mechanical” template, some conflicts are never laid out properly – for instance, Rei doesn’t want to show anyone he’s a Phiroid, but no one ever explains or, worse still, show why that would be a bad thing.

Rei also knows all too well about his emotional shortcomings for someone who can’t feel emotions – and his source of knowledge and memories about whatever is the problem with him or others is conveniently available or absent according to what the story wants at that moment, so the story feels slow and, contradictorily, we don’t get to feel the world around Rei as fast as he can explain it to us. He’s aware of everything that’s wrong with anyone, himself included, except the themes the story is discussing there and then, giving off a jarring feeling of disconnect between you and the characters.

This effect is exacerbated by how the art seems unable to convey how desolated the world actually is. It’s not the art department’s fault, really – we rarely have to deal with it in the story, with what this apocalypse meant for people and for Rei. Still, a continuous sandstorm effect over the backgrounds isn’t enough to make us feel like we’re witnessing the end of the world. 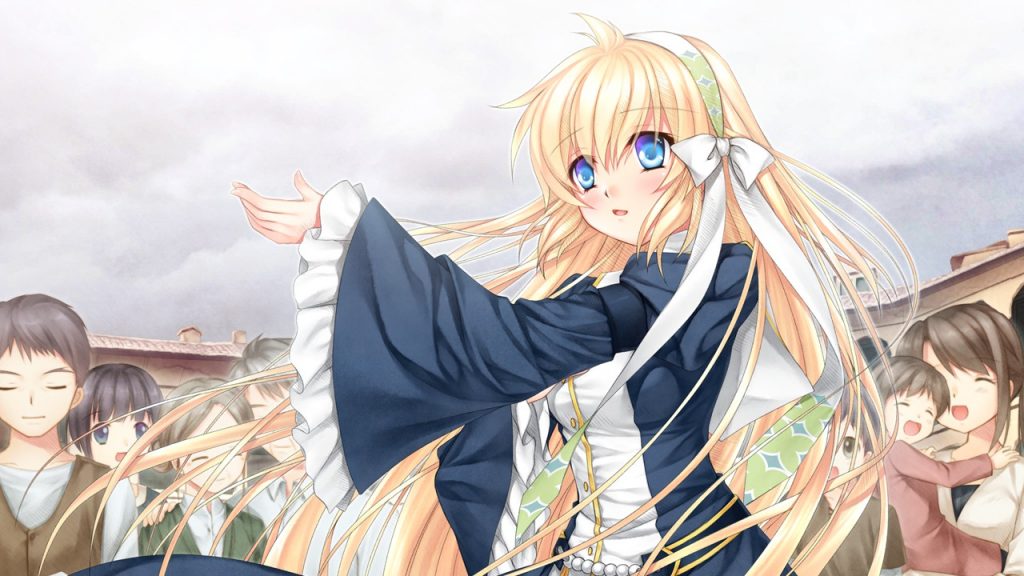 The second part of the story, from chapters six to eight, has all the answers and twists the early chapters didn’t have. A lot of things happen, all at once, everything gets explained and not much is discussed. This makes the story very entertaining and intriguing, but there’s a sensation that it’s all too shallow. It’s not as if everything in what I call the first part is abandoned in what I call the second part and, in fact, some themes are expanded and are shown under a new light – but the answers trigger new puzzles that are never solved, all in the sake of resolution.

The faults in how Rei works within this system persist, as he gets and accepts everything much faster than we do. Worse, there are hints that the writer never trusted his own twists, so he keeps having other characters ask if Rei knew it all along, to which Rei replies that he did. Of course, this also has the intended effect to change focus from the structural aspect of the story to the emotional one, get you to focus on the characters and how everything affects them. And it somehow works – the characters will still be monoliths, but by then you’ll care for them and want them to be happy. 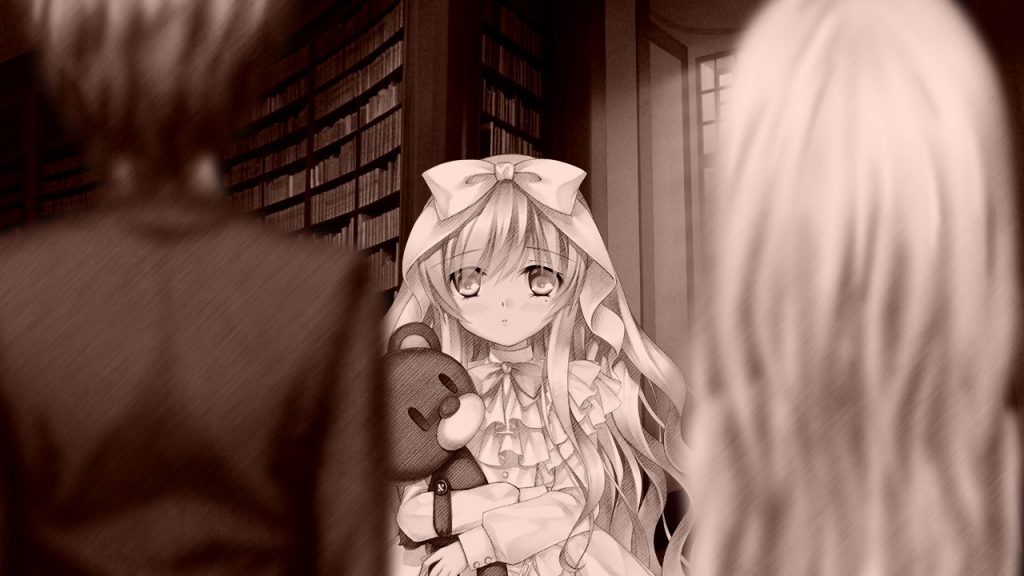 It’s a story from Key, through and through. It seems to want to be about something, touches on the surface of many themes and subjects, but the way the protagonist interacts with the world, more than the world itself, takes much from its potential. The sudden shift in gear in the story takes too long to happen, but, awkwardly, it feels as if there wasn’t enough time for you to truly bond with anyone, as interesting as the characters may be when thought about together. The lingering emotion you feel towards them as a result is a tiny fraction of what other Key visual novels do. You’ve seen the formula, but the essence seems to have been diluted this time around.

VNDB | Get Harmonia on Steam!

+ Intriguing towards the end

- Both slow and too fast (it's possible!)