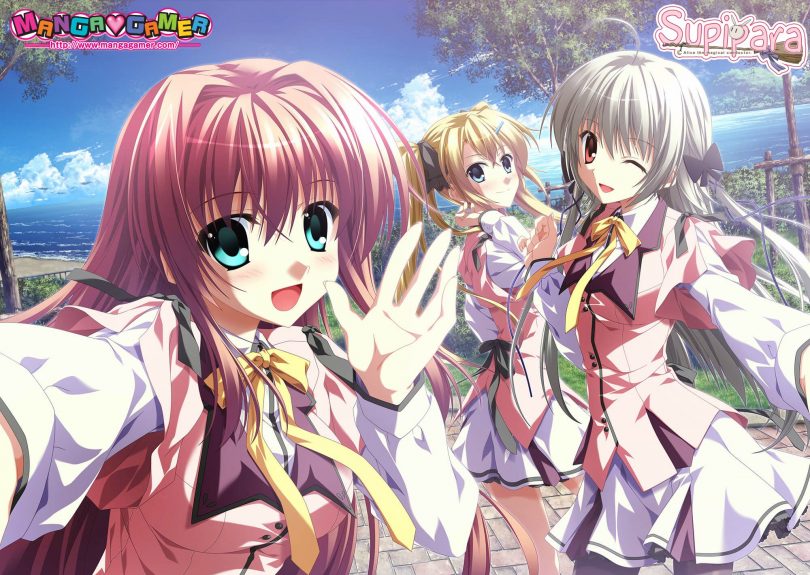 Minori has a long and storied history in the Japanese eroge industry. They trade in some of the most dramatic and tragic romance VNs you’ll see in the traditional romance market. From the love triangles and intense interpersonal drama of ef to the tragic fate the main characters of eden* faced, Minori made their name penning truly heart-wrenching tales. And they did so on a grand scale, with higher budgets and more production value than what you see in almost any other VN.

In 2012 Supipara was their next big swing for the fences, and in Japan it whiffed hard. Like ef before it, it was meant to be a two-part release, but sales of the first part were so poor that they were forced to cancel their plans for the second. We English readers finally have a chance to play it ourselves to see if the poor sales were justified, or if it was an underperforming gem all along.

Supipara Chapter 01 – Spring Has Come is only the first half of Story 01, the VN released in Japan. The second half, Chapter 02, is still locked behind the next funding goal of MangaGamer’s minori fundraising campaign. Even though it’s just one half of a release that itself was one half of the overall experience, it still tells its own complete story. 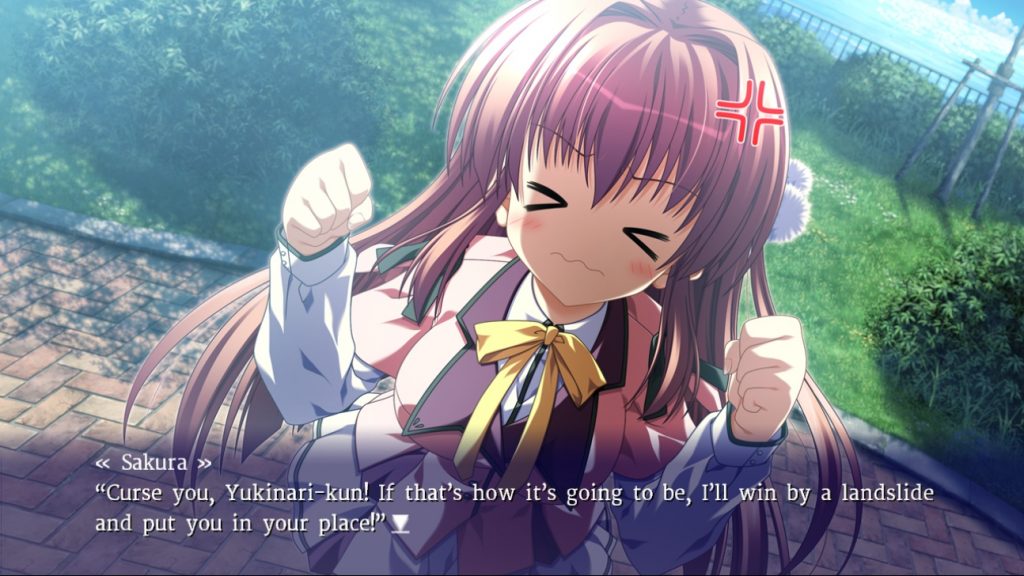 It follows Yukinari Sanada, the painfully generic protagonist whose only personality traits are his hard-working attitude and his penchant for straightlaced comebacks. Yukinari is returning to his hometown where his now-awoken mother has been hospitalized and comatose for seven years. Due to the same incident that caused his mother’s lack of consciousness, Yukinari also lacks most of his memories of his early childhood, including those of his mother. It’s now his duty prepare a home for her and get her acclimated to modern society. Amidst this chaos he reunites with his second cousin and childhood friend Sakura and meets a variety of new friends at his new school.

But a wrench is thrown into the mix when Yukinari meets the girlish witch Alice, who performs feats of magic using her customers’ happy memories as compensation. Yukinari’s mother was one such customer on that fateful night seven years ago. This initial premise is perhaps the most interesting part of the entire VN. Both Yukinari and his mother have holes in their memories, and are basically strangers to each other. Their awkward interactions are endearing and their path towards becoming a family again is one I never got bored of tracking. I wish I could say the same for the rest of the VN. 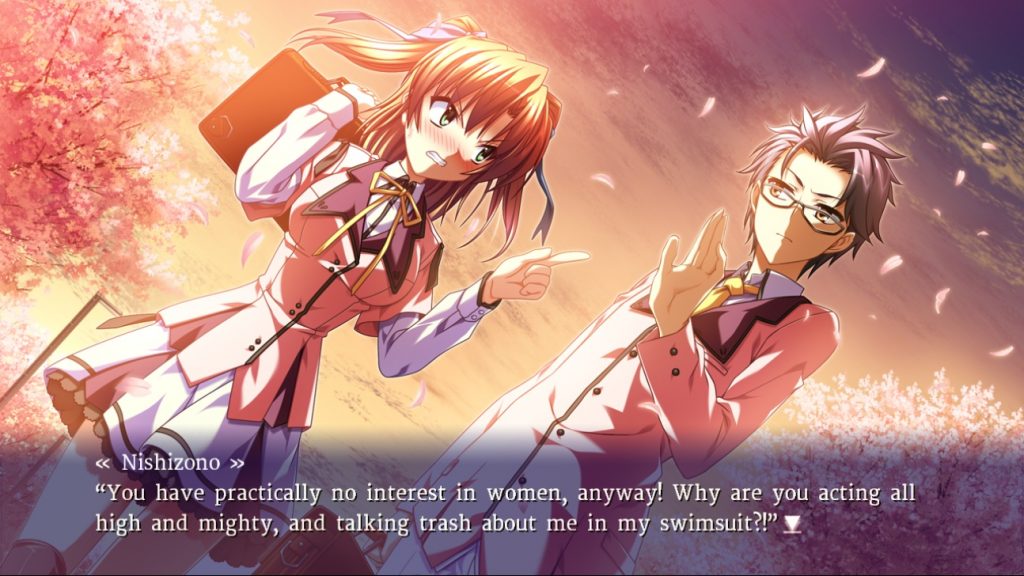 The beginning of Chapter #01 is bafflingly paced. The very beginning lays on the exposition thick and heavy, but when the time comes to introduce the cast it slows to a snail’s pace. It seems like it takes hours just to introduce everyone, yet every fiber of their character is practically laid out in their first lines. I’m not sure I’ve ever experienced anything quite like it. These characters immediately establish their relationship with Yukinari within their introductory scene, never for it to change again. It’s almost as if they’re all old friends who have been at it for years, yet barring any sudden plot twists in later chapters they all seem to be meeting Yukinari for the first time (except Sakura). The end result is a VN that feels laborious to read. Things progress very slowly, and there are long stretches where absolutely nothing happens. We’ve heard that complaint about some other VNs common routes, but Supipara is unique in that you don’t even get any character development. They give you very little to keep your attention for the duration of the doldrums.

Almost everything about Supipara feels like a departure from the norms previously established in minori’s beloved ef and eden*. The tone of the VN is perhaps closer to Wind’s common route than either of those. Most of the time it is goofy and irreverent, but unlike Wind and almost everything else minori has ever produced, it never turns on the serious switch. In fact, it never really flips on the romance switch, either, despite there being a central romantic relationship we’re meant to care about. Yukinari one day just suddenly declares that he has fallen in love, then nothing changes as we’re subject to gag after ineffectual gag. Then it ends. There was a confession at some point, but it hardly matters as nothing changes. It feels like the relationship between two of the side characters has a more interesting dynamic and is given more growth within the story than the one between Yukinari and the main heroine. 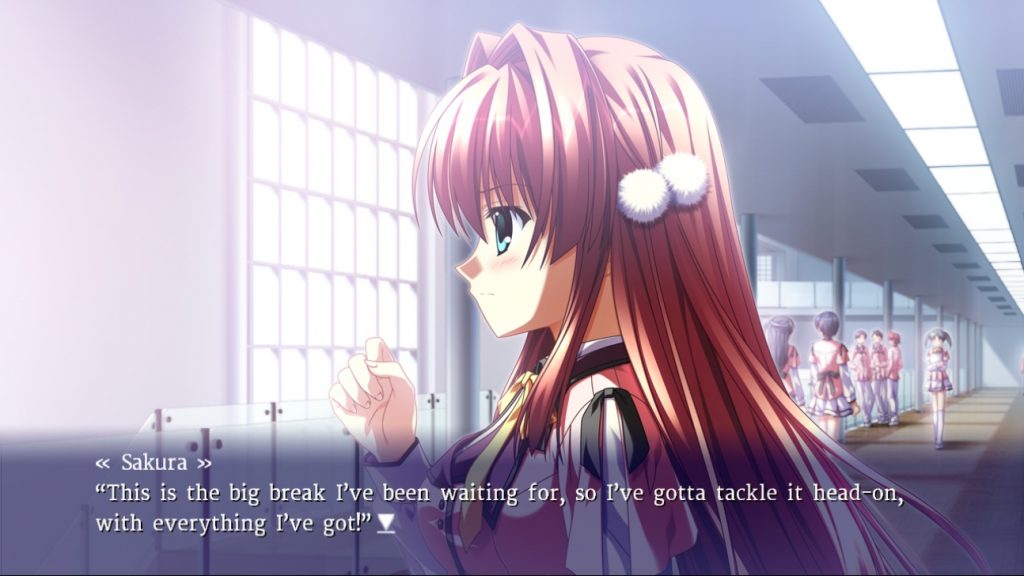 Minori is clearly out of their element here. They wanted to write a simpler, more light-hearted story than usual, but they just don’t know how. They overdid it on their quest to generify their main character. I found myself giggling at some of the gags but for the most part the humor was dull and rote. The characters are given very little depth beyond their initial appearance. And most damning of all, there’s no drama. The central relationship isn’t given a serious challenge to overcome, no feelings are hurt, and everyone is pretty much happy all of the time. It feels like the second half is building up to something that has no payoff. And the ending is done in such a way to ensure that there will never be a payoff, even in future chapters. Not to this story.

The area I can’t fault Supipara in is its production values. Minori broke the bank for this one, and it shows. The art is both gorgeous and plentiful. There is perhaps more CG density in ef, but the CGs were more detailed with more minor animations. Even the spritework is top notch with an absurd level of detail. Every character has multiple poses with a good five different angles at which they can be viewed from. And not only that, there are multiple head positions for each angle. They do a good job in transitioning between angles with animated hair sways and intelligent fading to make it look like they’re really turning around. The music is rather good as well, with a plentiful selection considering it’s a relatively short VN. So even if the story and writing are highly uncharacteristic of minori, the budget certainly is not.

Supipara has its moments but is sure to disappoint anyone looking for the kinds of dramatic stories minori has made themselves famous for. And even if you go into it looking forward to a simple moege, the characters’ shallowness and the lack of any true romance leaves that front lacking as well. Minori tried to do something new with Supipara but the end result is a confusing mess of an experience I’m not sure is right for anyone except those looking for the most basic of light-hearted slice of life. If you want anything else, I recommend you stay away.

Pick up your copy of Supipara Chapter 01 here | VNDB

+ Superb production values with high-quality art with lots of little animations that bring it to life.

+ Yukinari's mother is the best character in the game and their interactions together are the most entertaining.

- Uneven pacing can give you whiplash one moment and bore you the next.

- Characters lack depth and growth, never evolving past their initial appearance. Their relationships with the protagonist are cemented from the start, never to change.

- Complete lack of any serious drama to keep your attention with. The characters go unchallenged and never have to overcome any hurdles, making for a boring story.