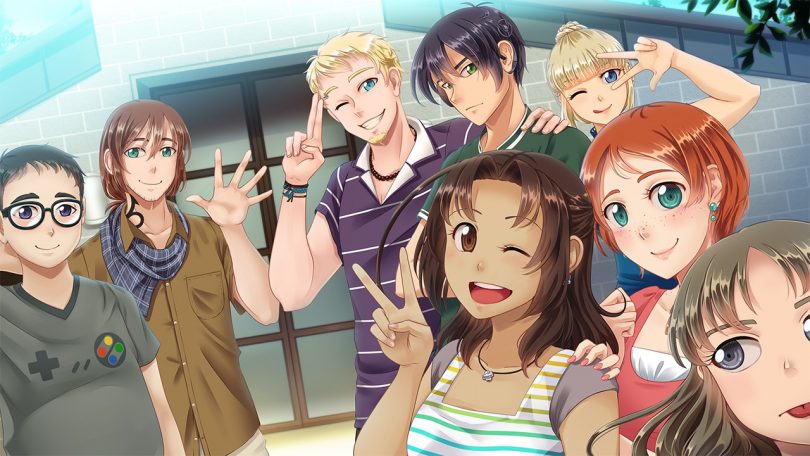 With the popularization of visual novels in the West,  it is becoming more common to find original English visual novels out there. Winter Wolves is one of those western visual novels developers, having a variety of visual novels on Steam including, Never Forget Me and The Flower Shop series. One of their latest titles is C14 Dating. C14 Dating tells of the experiences Melissa Flores, the protagonist, goes through when she decides to go to Belgium and participate in a archaeological internship. She leaves her home in California to spend two months in Belgium, dealing with the responsibilities from the excavation site, taking care of herself, and making friends.

C14 Dating is more about trying to show what an internship would feel like than a being a dating sim. It attempts to portray feeling of being alone in a different place, having to deal with problems on your own – in Melissa’s case, she has to deal with her diabetes – and trying to fit in in a place where you can’t even really communicate well with people, since most of them speak French.

All of the characters have an unique personality and the developers tried really hard to make a cast with diversity, having characters that are deaf, have a prosthetic arm and – even if it’s kind of silly that this is surprising – are fat. The sad thing about the characters is that, since the routes are kinda short, we don’t see much depth to them, they stay true to theirs stereotypes, like Shouji who is the “nerd guy.” He never really gets out from the “nerd” stereotype, being shy and talking a lot about games.

The dialogue of the game is loaded with archaeological references, having a lot of terms in the text and sometimes detailed descriptions of the techniques and procedures that are done on an archaeological site. This can make the game really interesting to some people or annoying to others. It really depends if you are curious about how an archaeological site works. If you don’t care about that sort of thing you will be happy to know that after the first play-through most of the game can be skipped, since the common route felt like 70% of the game. Though, even some events with the characters are heavy with archaeology, which can bother the people who want to play it just for romance. Then again, C14 Dating focuses more on your internship than romance.

Speaking of the romance in this game, I’m not going to say that it’s lacking, there is romance, but don’t go in this game expecting a ton of it. I could even say the relationships are a little unrealistic, but hey, it’s a game so that’s okay. There are cute and romantic moments between the characters and the romantic endings are awesome too, but because the routes are so short we don’t really get to see two characters together for very long, so it left me craving for more. 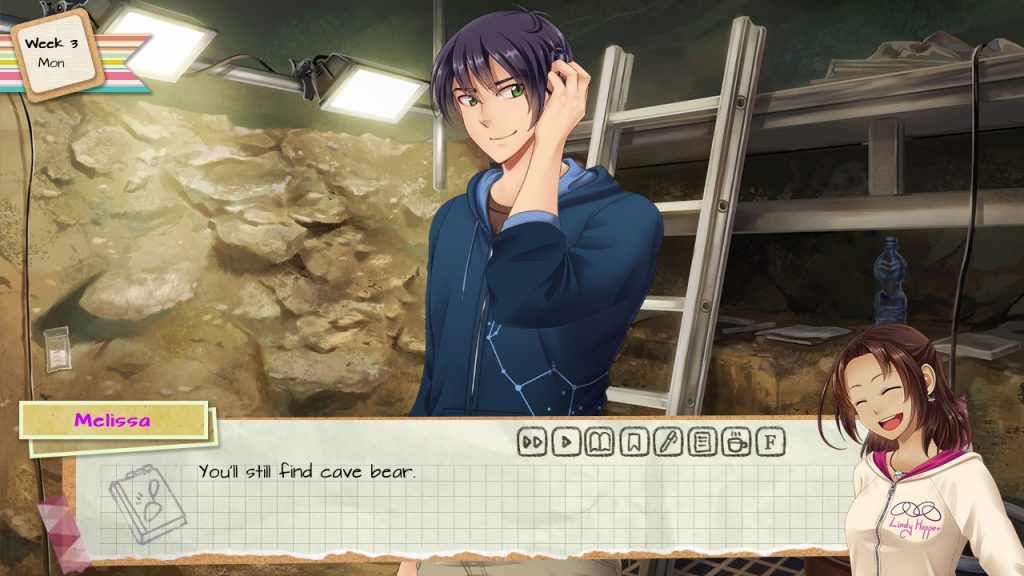 The game features two mini-games and a stats system. The mini-games are pretty simple and kinda enjoyable in the beginning but if you don’t want to deal with them you can just skip them and they don’t really affect the game. Doing them just unlocks information about archaeology, which is nice for those who don’t know much about the subject. You can tell that the developer put effort into their research for the game. The stats system is pretty simple too, you have to plan a schedule of activities to Melissa and x activity will raise x stats, the only problem is that the game doesn’t explain what impact the stats have and the only way I figured it out was using a guide. The stats decide if you are going down a friendship route or a romantic route with a character, and when you figure it out it gets easy to use it, but an explanation would’ve been great.

The art is cute, and has charm. The sprites all feel unique and the background art and UI are beautiful. The only complaint I have here is that there are only six CG per character (except for Hendrik who only has only five). The music is nothing impressive, but it isn’t annoying at all and combines well with the game and the scenes. It does a good job being background music.

In conclusion, C14 Dating is an enjoyable and cute game, with cool characters and an awesome protagonist – I really liked Melissa. It’s a fun and interesting game for anyone who has even a little interest in archaeology and even if you don’t, the interactions between the characters and the cute art can make the game really enjoyable.

- Characters based on stereotypes, don't have much depth to them

Just because I want to fuck a cake doesn't mean I'm a pervert.