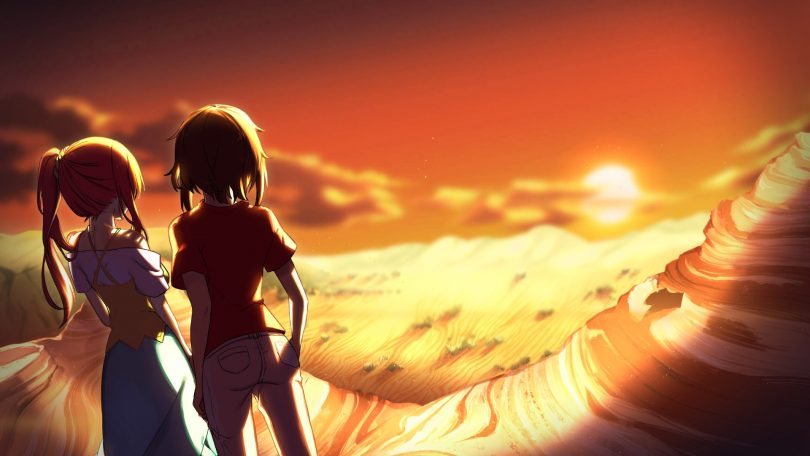 What happens when you combine motor-homes, the vast open American Southwest, a treasure hunt, and yuri? Highway Blossoms happens.

Highway Blossoms is the debut VN from Alienworks, telling the story of a young woman named Amber who has recently lost her grandfather to an illness. She travels across the American Southwest in the motor-home he left her, taking in the sites that the two of them had planned to see together, slowly making her way to California for a music festival her grandfather had wanted to attend. While driving down the road, she spots a girl with red hair named Marina hitchhiking for a ride. While helping her, Amber learns of a treasure hunt taking place. The journal of a gold rush miner has been found, with clues as to where he has hidden gold. Together, Amber and Marina get swept up into the new gold rush craze, joining many others in a search for treasure. 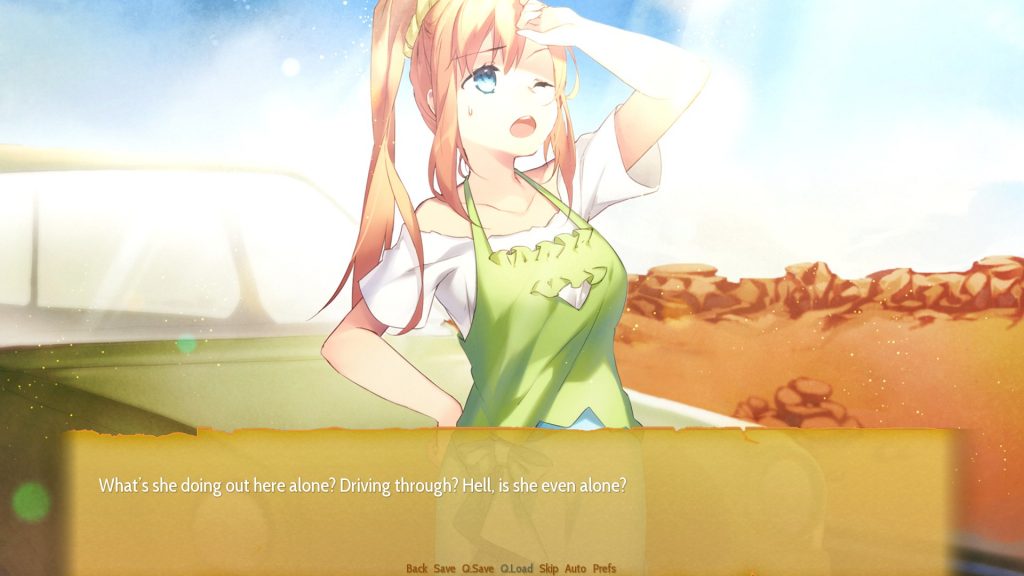 While the setting is unique, the story is not. That doesn’t mean the story is necessarily bad, but instead that it is very predictable, following a standard blueprint for romantic stories. The relationship between Marina and Amber builds slowly but surely, culminating in a big falling out, wrapped up neatly and happily at the end. It is nothing new, so the execution of the story needs to be nearly flawless to have any sort of impact in order to be enjoyable or effective. Thankfully, the story rarely stumbles, or drags on. It moves along at a fast pace, while still giving well-explained, descriptive accounts of the scenery, people, and Amber’s thoughts. Highway Blossoms is not too wordy of a VN, giving you what you need to enjoy it, leaving the superfluous explanations and dialogue that plagues many VNs behind. 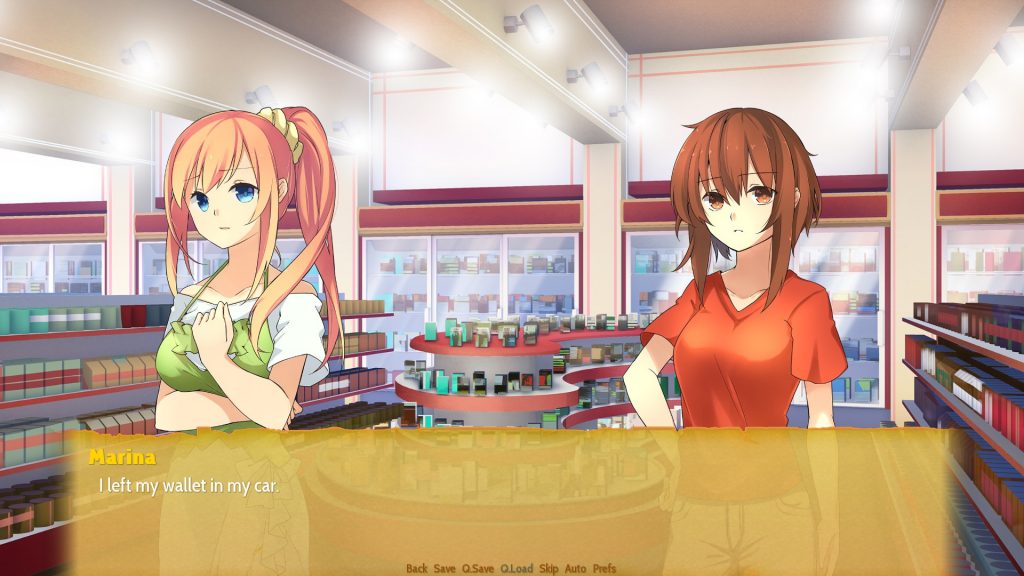 Watching the relationship between Marina and Amber building up was the best part of the VN. The two as growing friends exchange pointed, but light-hearted jabs, have funny takes on the people and environment around them, and are just fun to watch grow together. In fact, I sort of wish the two had not grown romantic feelings for each other. Their interactions as friends were far more enjoyable to read than their interactions as lovers. When they do decide to enter their intimate relationship, the VN does begin to drag a bit, inserting a huge overreaction from one of the characters as the key point of conflict. Before that conflict though, the dialogue between Marina and Amber becomes unironically cheesy and forced. It wasn’t horrible, but the striking difference between the two as friends, and the two as lovers made me want to go back to them being just friends, a feeling that did not go away even after the credits rolled. It should be noted I don’t particularly care about yuri, but I do enjoy seeing fun relationships regardless of the genders of those involved. Yuri fans may feel the opposite of me, and love the more lovey-dovey attitude of the characters more than their interactions as friends.

The side characters of Highway Blossoms are all fun, with the main three, Tess, Mariah, and Joseph all being hilarious, and playing off of each other very well. Tess, in particular, was always funny, and the writing staff made full use of her limited screen time to crack plenty of jokes. As an added bonus every single character that speaks, with the exception of various waitresses in diners, has a character sprite. It is rare to see an EVN do this, and still have high quality sprites for all of them. 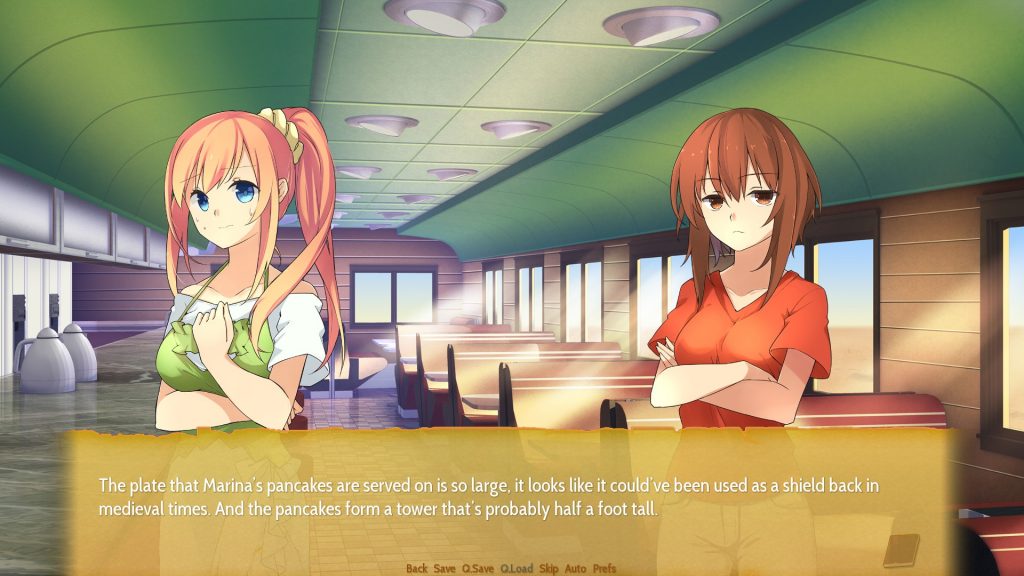 What is also rare to see, is the insane production quality of Highway Blossoms. The entire VN is in full HD, so enjoy those crisp character sprites and the gorgeous CG work in fullscreen with no blurring. On top of that, the camera work is something I never expected to talk about in a visual novel review. The Ren’Py 3D camera allows for seamless sprite movement, camera refocusing, and even minor animation, all of which come together to make Highway Blossoms a treat to watch. All of the extra movement accentuates the already fun dialogue, and adds punctuation to movement descriptions. It spoiled me, and now I really want to see more developers make use of the Ren’Py 3D camera.

The artwork of Highway Blossoms is fantastic. The character sprites are professional-looking, and it looks great in HD. The background work is also well done, and the accurate portrayals of various locales in the American Southwest are just icing on the cake. Some of the CG work is just stunning, but strangely enough, other CG work is okay at best. I’m not sure what the cause of the inconsistency was, but some of the CG work is overshadowed by a select few images that make incredible us of lighting and color. That being said, you could certainly find far worse art in much more popular VNs than this. 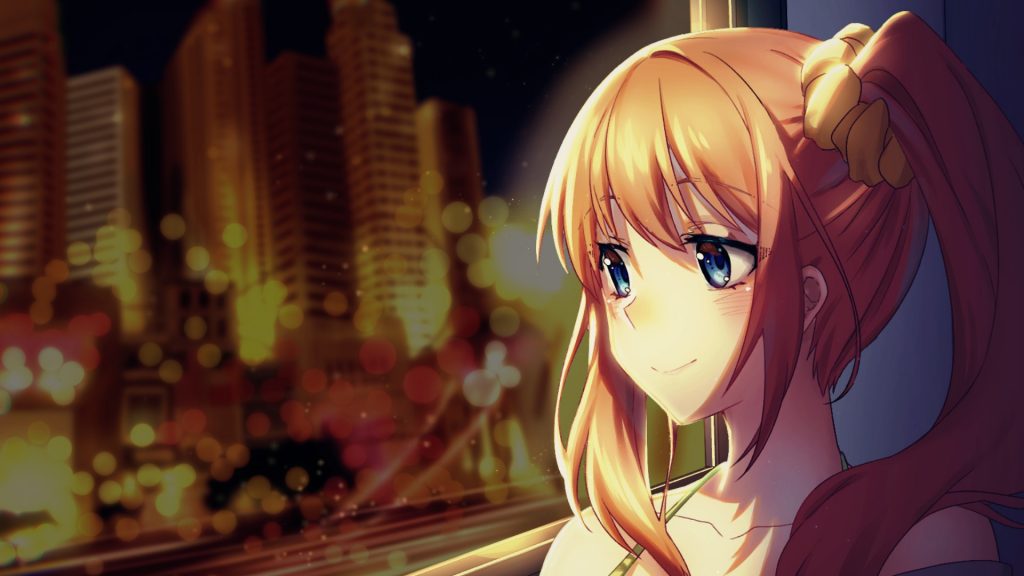 Highway Blossoms is a fun way to spend a few hours. I clocked in at just under 4 hours for my reading, and at $9.99, with such high production quality, the price of entry is worth it. Sure, the story may be somewhat standard, but it is complimented by fun characters, some gorgeous CG work, and a unique setting sure to appeal to anyone looking for a new, interesting locale in their VN.