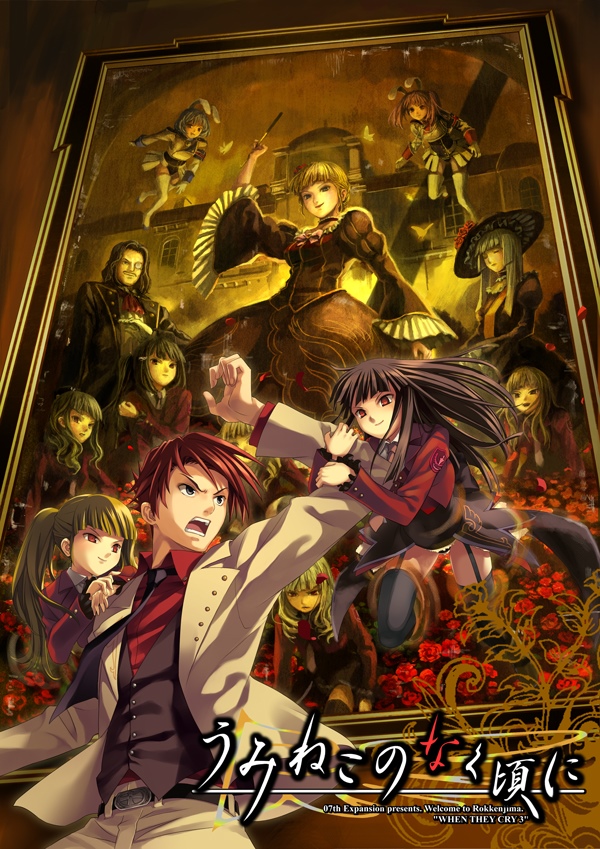 Umineko When They Cry is the third game (or second, depending on whether or not you consider Higurashi as one game) of Ryukishi’s “When They Cry” series, first released back on 2007~2008 and brought to steam by Mangagamer about two weeks ago. The localized game covers the first four chapters of the story, which have more of a focus on the mystery elements than the second half does.

First and foremost, some of the game’s characters are related to Higurashi no Naku Koro ni, and you will get their origin stories there… Ultimately, that’s not too important, though – Umineko does stand on its own as a very good and fully understandable work. The most you’ll really miss from not knowing Higurashi, other than the origin story mentioned previously, are a few easter eggs. If you plan on reading both games, starting with Higurashi will let you know a few extra things, as well as understand how the chapters of the story are going to work from the get go… But if you don’t have Higurashi, feel free to go for Umineko without a second though, as what you’ll learn is really minor.

As for the mystery itself, it’s not bad. It’s intriguing, but because of Ryukishi’s less-than-poetic and often unrealistic scene descriptions, it can sometimes be immersion-breaking. The game also works in a way that makes you constantly question the reliability of the narrator, which can be quite a headache. Ultimately, it’s entertaining, but it’s not a mystery for one to try and solve. While done well, the mystery is something that serves to further develop characters and to break the status quo of the story in several different ways. This has a big effect on the narrative, and it’s largely a positive one. You shouldn’t go into Umineko expecting a mystery for the ages, though.

Ryukishi is notoriously bad at writing fighting scenes, and Umineko is no exception to that. At its worst, the dialogue in those scenes will look like something taken out of a bad RPG: Antagonist launched 20 spears! The spears turned into beats, each then becoming two hundred lightning bolts! But, antagonist 2 used a omni-shield! It’s super effective!… You get the idea. 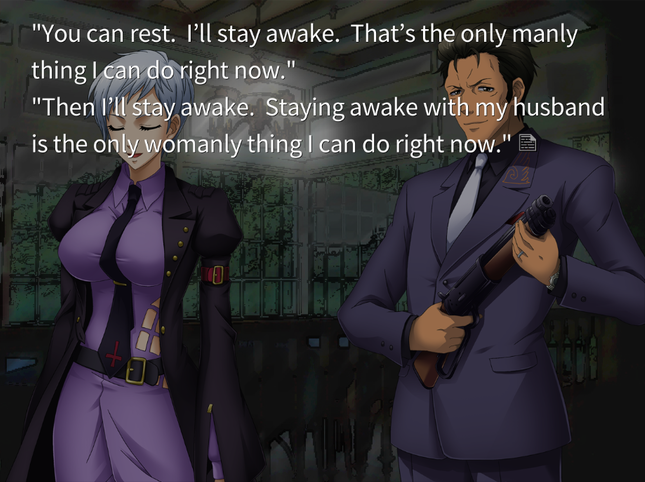 Another problem of the story is its pacing. And, to be honest, it’s not too bad. If you’re used to Visual Novels, you know titles this long are almost bound to have some pacing issues, and Umineko handles that fairly well. They’re still there, and they’re still a problem, though. Sometimes happy scenes feel too extended or long, and generally needless, this often applies to some of the fighting scenes mentioned above, too. When you don’t truly know what the characters are capable off, and their attacks feel like something out of a children’s cartoon, reading battles is surprisingly monotonous… Especially since these battles are more often than not curbstomps by the clearly superior character, and I have thought to myself that “I wish they got to the end already” an unexpectedly large amount of times.

But why is the game so popular, then? Well, character development comes to mind. Ryukishi is remarkably good at writing characters, and you’ll see in most of his games that he makes use of a technique that clearly defines a side of the cast as good and the other as evil, while simultaneously allowing you to sympathize with his antagonists. While some people would see this as a bad thing, it’s done expertly, and really, who doesn’t like having a charming underdog to root for when said underdog is written so well? Battler’s heroism is clear for the eye to see, while the cruel characters are as endearing as they are flawed, and even if you don’t agree with all of their actions, by the end of the story, you’ll have come to understand, sympathize with, and like most of the very large cast, a feature that few VN writers are able to pull off. 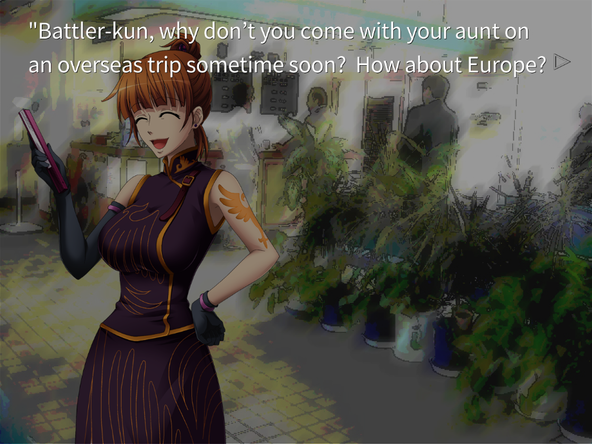 Aside from a few odd moments mentioned before, the game is also very immersive. The sound effects, the way the characters look, the great development, the mystery, the believable personalities, and even the stylized menus all add to an experience that pulls you in and gets you, like a demon hungry for more of the very unique experience that is this game, all of which is enhanced by the spectacular music.  Umineko has a ridiculously large soundtrack, and the vast majority of that soundtrack is really good, suiting the scenes they were made for perfectly.

In the end, should you play Umineko?

Probably yes. The game shines in character development and pushing your feelings to the edge, and while it has a non-trivial amount of problems, it pulls off what it tries to do very well