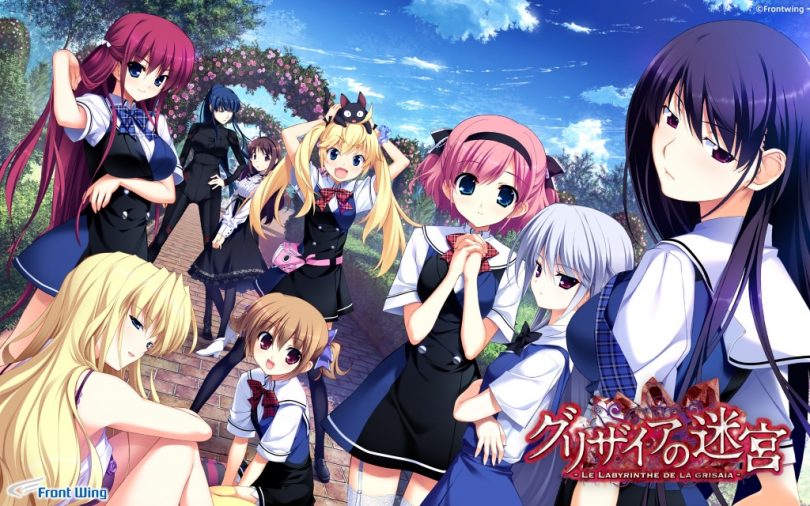 Spoiler warning: This review will contain mild spoilers for the previous game in the series, The Fruit of Grisaia/Grisaia no Kajitsu.

The Fruit of Grisaia is probably my second favorite VN ever. With its charming cast, hilarious banter, and moving character moments, it’s hard not to fall in love with it. But when I thought about what I wanted out of a sequel, I struggled to come up with anything. All five fully independent stories in Fruit already felt complete to me, like there was nothing left to add. Yet regardless of whether or not you feel a sequel is necessary, writer Fujisaki Ryuuta is not yet finished telling the story of Kazami Yuuji and the five girls of Mihama High.

The Labyrinth of Grisaia is not quite the follow-up many may have been expecting, however. Instead of pushing the story forward, Labyrinth’s main route is one long series of flashback sequences detailing Yuuji’s sordid past, framed within both a promotion interview at his “company,” and the discovery and restoration of some shredded documents the girls discovered at the Mihama dorm. This framing device isn’t always the most eloquent, but it serves its purpose. 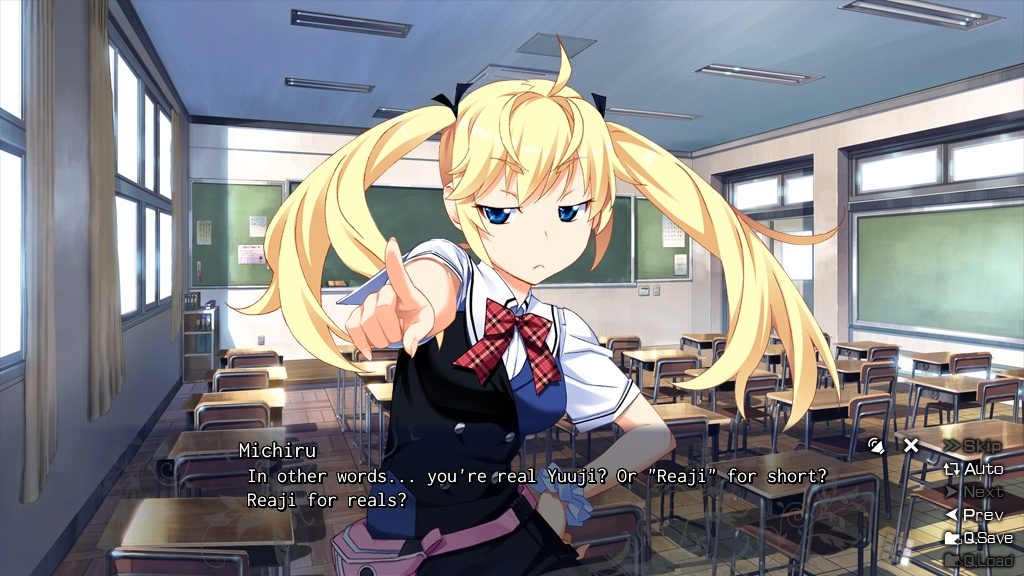 At first glance, you expect this to be a story you already know all the twists and turns for. Fruit already touched on Yuuji’s troubled childhood, the death of his parents, his eventual master rescuing and bringing him to a military school in America, and so on. What’s made clear pretty quickly is that we really only knew the broad strokes. As Labyrinth fills in the details, what emerges is a story with much more depth and emotional heft than I ever expected. Yuuji’s past was never portrayed as a simple one, but the reality is even more complex and tragic than we were lead to believe. Despite already knowing the general details from the previous game, I found myself regularly surprised at exactly how some things turned out, keeping me engaged the whole way through.

The colorful cast of new characters Labyrinth introduces contribute greatly to this experience. There are new friends and antagonists. Yuuji’s old crew “The Bushdogs” make their debut in hilarious fashion. These characters are all incredibly endearing and lovable, and it makes you wish there was more time in the spotlight for them. Even within the confines of the main route, their time is unfortunately short. The good news is that it seems some of them may return for the next entry in the series. 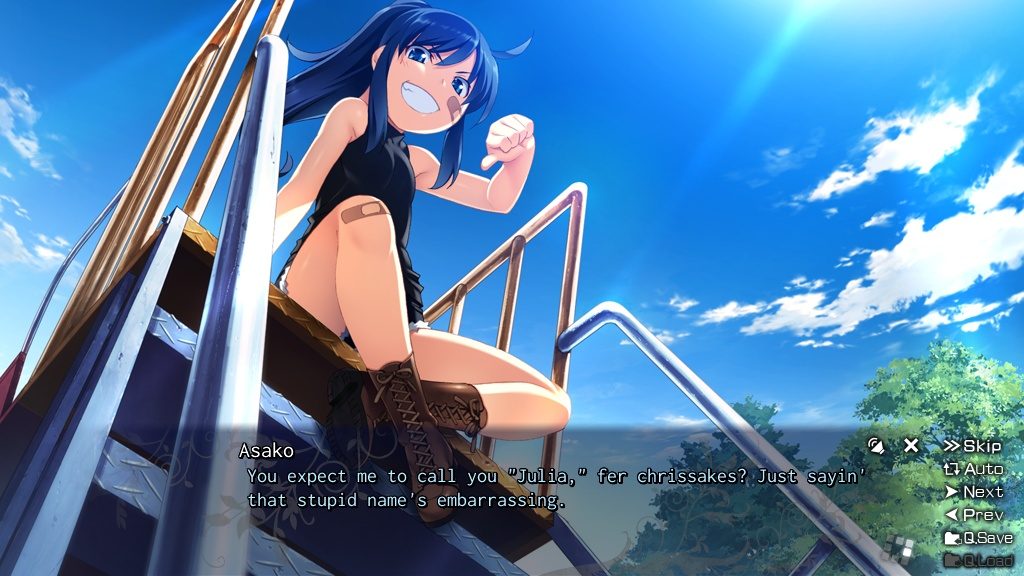 And of course the most important new character is one we’ve already heard plenty about, Yuuji’s master Asako. Asako was a legendary figure in the Grisaia mythos, and finally being able to witness these fabled interactions with Yuuji is really quite satisfying. Asako is loud, brash, and impulsive, and somehow ends up becoming Yuuji’s adoptive parent. The sequences they spend together are all so charming, and really bring to light one of the writer Fujisaki’s biggest strengths; believable and gradual character growth. It adds so much texture to the narrative, and by the end of Yuuji’s odyssey,  you can really see how he turned out the way he did, with both his strengths and his flaws.

Beyond the main “grand route,” there are also after stories for all five main heroines and a few dozen very short side stories. The after stories are largely what you expect out of a fandisc. They each consist of a couple hours of additional slice-of-life goodness and some very light story elements. Almost mirroring my experiences with Fruit, my favorite was the Makina after story, and I ended up pretty happy with my decision to play it first. Its story opens on a homecoming of sorts, with Yuuji meeting with each of the game’s characters after spending a good amount of time away. These interactions were hilarious and heavily reminiscent of the common route goodness I enjoyed so much from the first game. Moreover, Yuuji’s feelings often mirrored my own, as he was being welcomed back by this cast I love so much after spending so much time away. 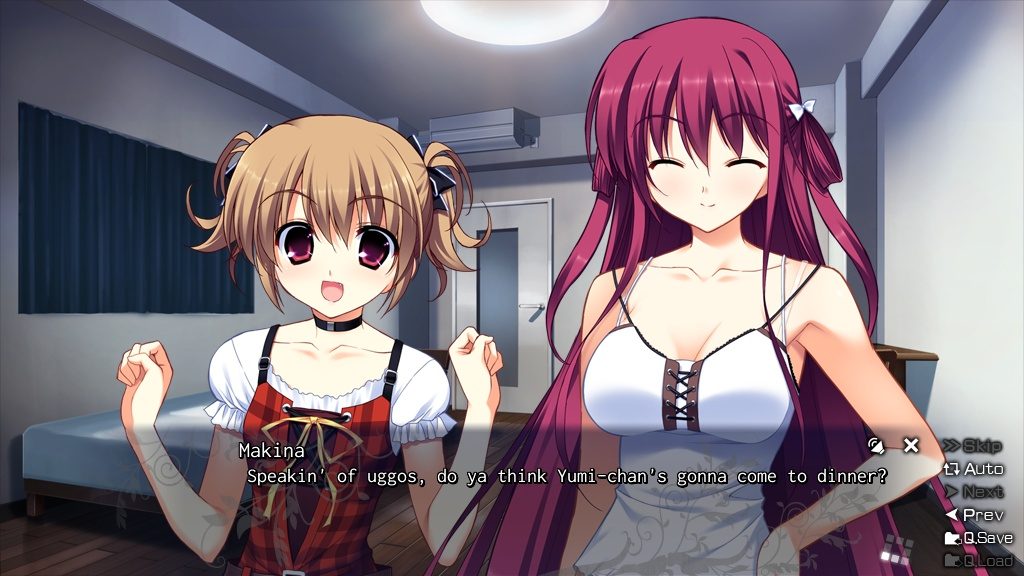 The other after stories are quite good as well. They each last around an hour and a half to two hours, and provide exactly what you want out of an after story. They don’t get too heavy, or delve deep into any drama, they just tie up any remaining loose ends and give each route a more satisfying conclusion while granting us one last chance to bask in the quirky dynamics of each relationship. The side stories are much less substantial. Each one comes apropos of nothing, and they feel so scattershot that it’s difficult to get a good appreciation of them. One moment you’re watching Sachi trying to communicate with a shark, and the next you’re getting a new comical moment from Angelic Howl. Some were fifteen minutes long, others were two. There’s no real flow or consistency to any of them, and I honestly couldn’t even bother reading them all.

Labyrinth primarily reuses its assets from Fruit, which can feel a little cheap at times. There are no new character sprites for any of the returning characters, and only a handful of new BGMs. It’s good that Grisaia’s music is so great then, and the few new tracks present here fit in excellently. The new backgrounds and CGs are also up to the level of quality seen in the previous game. I just wish that everything wasn’t so heavily reused, it would have been nice to have seen new looks for the old characters and a soundtrack that wasn’t mainly old tunes.

There have been a lot of questions surrounding the censorship of the Steam release, and while I’m not deeply familiar with the uncut 18+ version, I can tell you that most of the concerns being expressed seem heavily exaggerated. Through the course of playing the grand route, I sensed no gaping holes in the story. In fact, I thought the cuts to remove h-scenes were done fairly well, nothing really felt missing at all. Sex is still referenced often, there are still many sexual jokes throughout the whole thing, and many of the CGs they left in or modified are quite NSFW. If you’re worried that you’re getting a heavily neutered version by buying it on Steam; you’re not. You’re certainly not getting the “full” experience, but you’re still getting a pretty great facsimile of it. 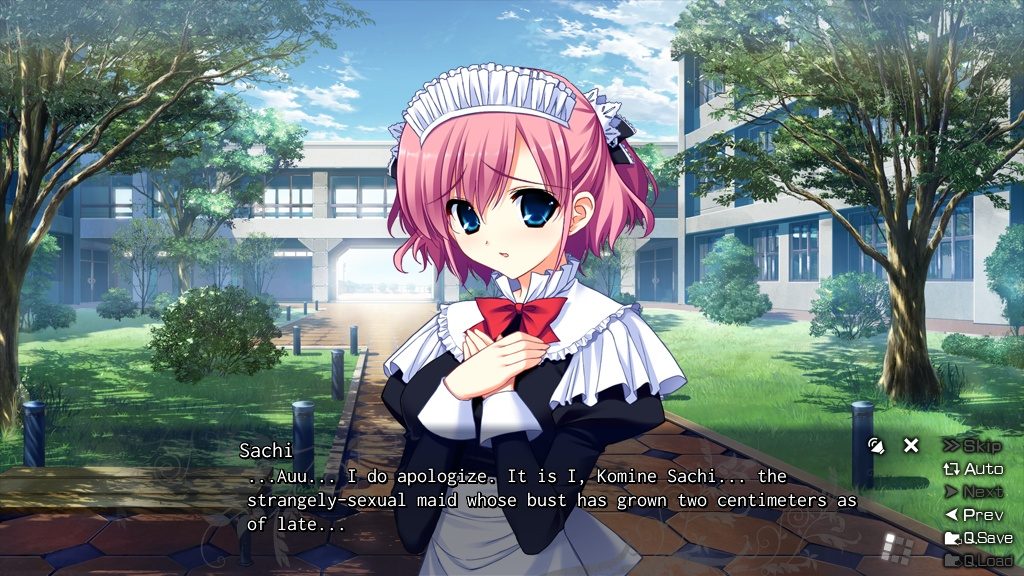 At Labyrinth’s best, it reminds me of everything I loved about the original game. But it also feels confused, not quite sure what it is trying to be. In the end, all it actually ends up accomplishing is laying the groundwork for the actual sequel coming out soon, The Eden of Grisaia. The Grisaia names have always left me wondering on their meaning, but for Labyrinth I have found a plausible explanation. It’s a bridge that serves to connect the two main events of the Grisaia series. The span is surprisingly short, but the path across is meandering, full of so many turns and dead ends that once you reach the conclusion, you wonder why you couldn’t have just taken the direct path instead.

But there’s satisfaction in solving a good maze, and the life of Kazami Yuuji is as fascinating a labyrinth as they come. I may not fully understand why this series has taken the path it has, but I can’t deny that it was an enjoyable ride. The Labyrinth of Grisaia’s lovable characters, dramatic main route, and enjoyable after stories managed to hook me and keep me entertained despite the largely unnecessary nature of it all. Would it have better if they had integrated both Labyrinth and Eden together? Probably, but they did a good enough job here to keep me from worrying about that too much.

Pick up your copy of The Labyrinth of Grisaia here | VNDB

+ The humorous dialogue and tragic drama is just as good as it was before.

+ After stories don't feel phoned in, but are given plenty of attention with good emotional moments.

+ Feels a little thin for the price, and fails to justify itself as a full stand-alone experience.

+ Side stories are presented rather clumsily and aren't very interesting.