Home » Reviews » One Small Fire at a Time 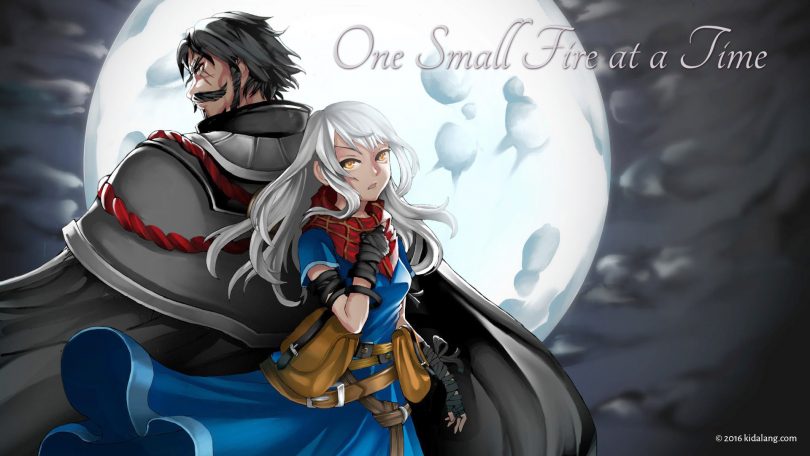 DISCLOSURE: Fuwanovel reviewer Joshua “Ryechu” Renner served as the Lead Editor of One Small Fire at a Time. His involvement with the visual novel had no bearing on this review.

There was a time when the only thing society truly did with people who had mental troubles was to put them away and hide them. One could even say it’s still sort of that way today, that some mental institutions aren’t really established for rehabilitation, but to just remove people deemed too inconvenient for society. This is partly a theme and the setting of the recently-released visual novel One Small Fire at a Time, where we have a group of children deemed insane for various reasons, but none of them as severe as Janis. Our young heroine is being hidden for what is considered the worst form of insanity of all. More on that as we go.

Released by Kidalang, the story serves as a standalone precursor to their previously released title, An Octave Higher (2015). You don’t need to have read the earlier story to read this one, as the only thing the two have in common is the setting, the world of Overture. In Overture, everyone has magical abilities, to the point that it’s practically a crutch for society. Those with mental illnesses that can’t be cured by magic are sent to one of the madhouses. 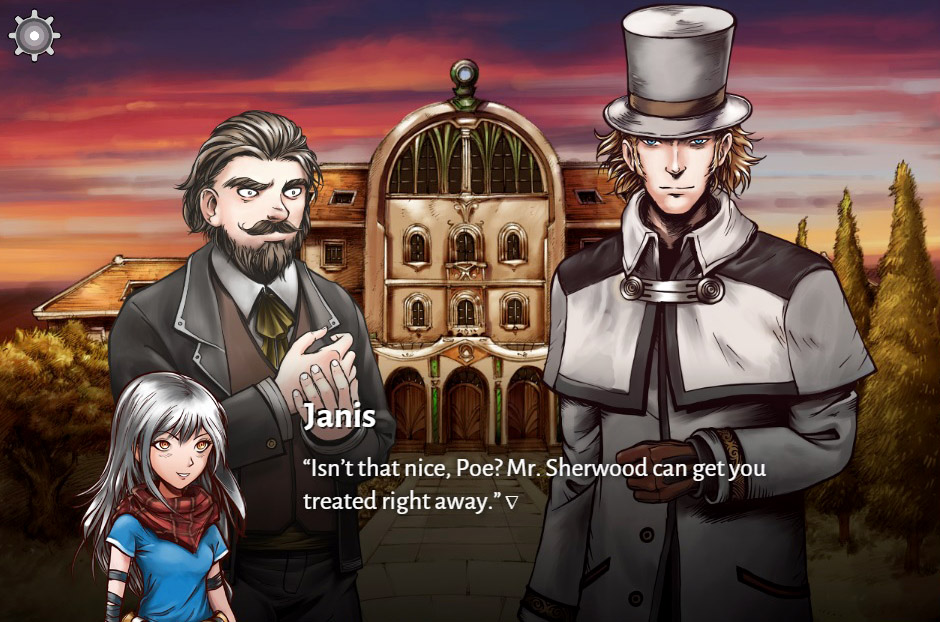 This is where we find Janis, whose eyes serve as your view into the story (fancy talk for “she’s the protagonist”). Janis is, by all accounts, an ordinary 13-year-old girl, save for one severe problem – Janis has no access to magic at all. She can’t heal, can’t toss fireballs, can’t bend a spoon, etc. In everything else about her is fine, and she shows no signs of any actual mental illness, save for a complete lack of magical abilities. Of course, in a society that’s completely dependent on magic, this makes Janis “insane” in the eyes of everyone else. So she’s deemed to suffer from “Magic Deficiency Disorder” and has been dumped off at a fairly nice madhouse, run by the Sherwoods, Colton and Oriel, where she has lived for several years. with the other insane children, though the only one she really has any connection to is loopy Candela Carroll. The difference between her and the other children? They do have magical abilities, and actually are kind of not-right in the head. Once a child hits a certain age, they’re transferred to the adult ward across the property, for reasons not quite clear to anyone but the Sherwoods.

As the story begins, we find Janis engaging in a futile session of awakening magic powers with her sweet but somewhat air-headed nurse Ena. After failing, Janis heads outside, only to be confronted by Drake and his gang of misfits, who proceed to bully the magic-less Janis – taunting her, using wind power to try and flip her skirt, that sort of thing. However, Janis isn’t one to let a complete lack of magic keep her from putting a bunch of idiots in their place. And she does so in front of an unexpected audience – rich entrepreneur Joff Godwin, magical scientist Johann Poe, and Dragoon Commander Aidan Woolf. It’s not by chance that this motley crew of onlookers is here, and their visit drives the rest of the story going forward. Woolf, in particular, takes a shine to young Janis, and heals Janis after her run-in with Drake’s gang. From there, you continue to learn of Janis’ past, the reasons behind the visit of the fateful triumvirate, and what’s really going on at this particular madhouse. 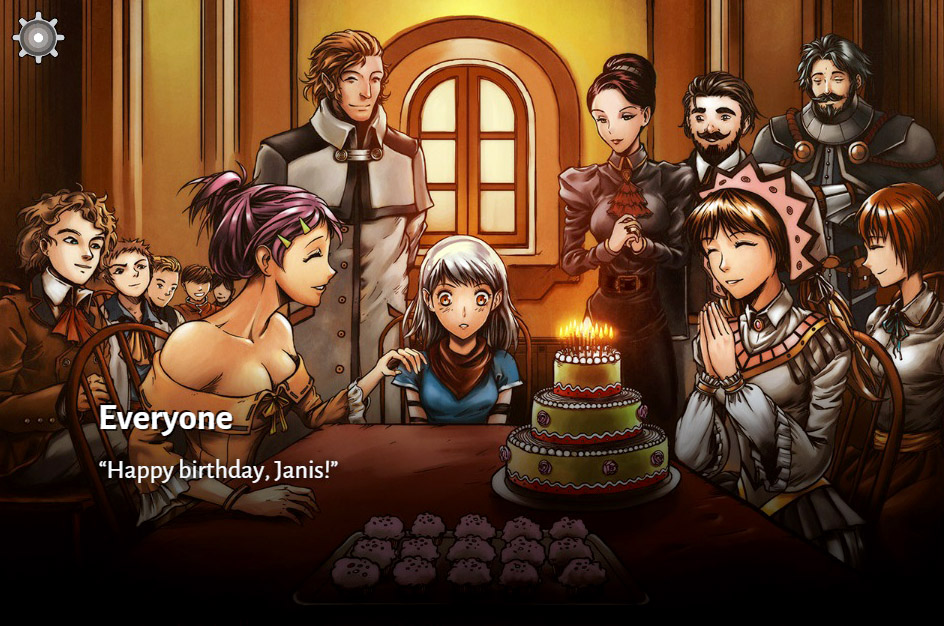 One Small Fire at a Time is set up as a fairly typical visual novel – sprites on backgrounds, with hovering text that eventually leads to choices. The choices you make affect certain secondary characters, gaining or losing what could be called bond points, and if you don’t gain enough bond points then certain endings won’t be available, of which there are four (a true ending and three alternates).

The strength of this visual novel is clearly the visuals. The sprites in particular are excellent. The clothing worn by the characters as well as the backgrounds give a setting that feels lightly like Victorian steampunk. The CG artwork is very nice, and a gallery is included to return to review those. Overall the artwork feels like it was given the high-priority care it needs for a successful novel. 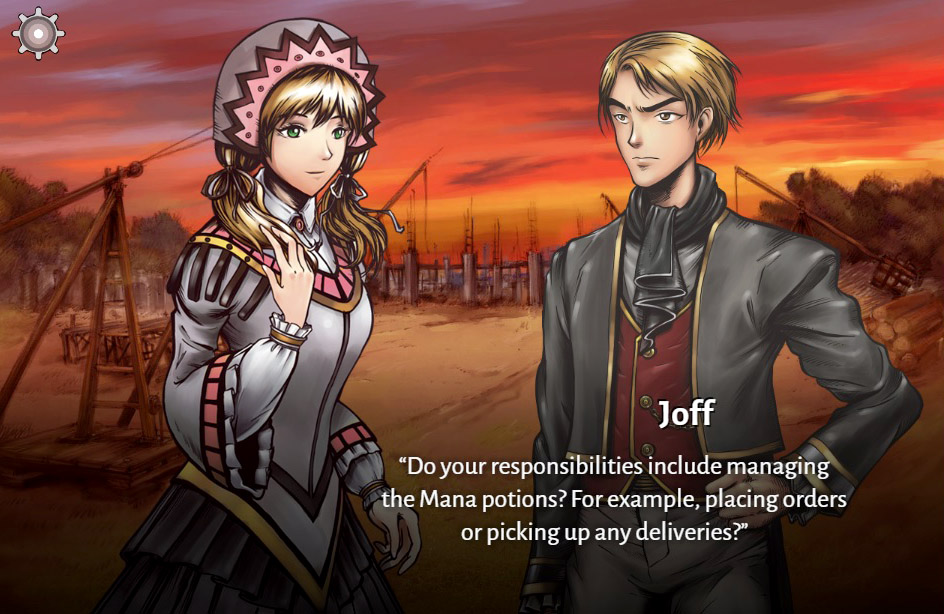 Gentlemen take note – this is a terrible pick-up line.

This brings us to the story itself. There are interesting concepts that the writer has brought into play, the defining of insanity, the construction of a society and how that society handles outliers. Pretty heavy stuff, but it feels like the story was too short to really explore these topics in-depth, giving it a bit of a glossed-over feel at times. Due to the story feeling too short, character development suffers a bit as well. The Sherwoods feel flat at times, due to the lack of screen time and character interaction. This is kind of important, as they own the madhouse and are integral to the plot – I should have developed some sort of feelings for or against them and those feelings just never arose. The development of Woolf also doesn’t feel quite right as well, and as one reaches the climax of the story he feels incomplete for what’s going on. And Poe’s assistant, Alanis Blyton, almost feels like a throwaway character as her only interaction is a couple of short scenes with her mentor. That said, the character interactions between Janis, Ena, and Candela are fleshed out rather well. And the story behind Janis and Drake also is satisfactory.

The other thing that seems off in the story is the actual writing itself. At times the script doesn’t really match the setting, as visualized below. 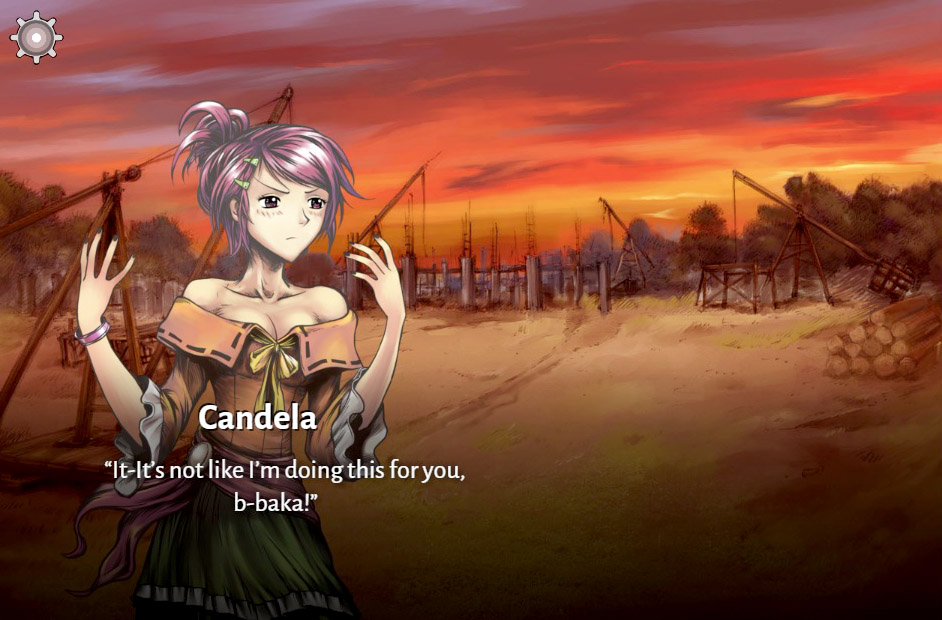 I don’t recall this being set in Japan.

In this scene Candela is taunting Ena about her obvious crush on Joff (and adopting both of their faces as she imitates them, which was pretty cute). The tsundere phrasing and adding the Japanese ‘baka’ throws off the feel of the setting, which is decidedly not Japanese. There are other examples of this as well, and while I appreciate the attempt at humor during what is a rather serious visual novel, it should fit the theme and setting.

In summary, I’d say that One Small Fire at a Time is a good visual novel, but could have been better with an expanded script, allowing for more interactions and opportunities to relay the concepts introduced. It’s okay to allow more “novel” in visual novel if it makes the story stronger.

You can purchase One Small Fire at a Time on Steam.

This review made possible from a Steam key provided by the game’s developer. Thanks for supporting the visual novel community.

+ Art, sprites in particular, are delightful

+ The protagonist is an interesting figure

- Story does not feel long enough to expound upon its concepts

- Some characters feel flat or unnecessary

- Lack of music gallery is a tad disappointing