Whenever we think of dystopias, we picture gloomy locales, stages for failed systems in which either a bigoted elite exploits the oppressed majority or everything has gone utterly wrong for absolutely everyone. People are often portrayed as constantly sad, in fear, and on edge. There is always an underlying message about our own reality that needs people to be simplified in one or way or another so that some topics can be talked about on a deeper level. It would seem like an oxymoron to have a comfortable dystopia. Cities of the future are always absolute, aren’t they? Blade Runner‘s L.A., 1984‘s London or Akira‘s Neo Tokyo are monoliths that tower above the characters and you, the skyscrapers being untouchable and impersonal, as if to tell you your story is only one among many, because everybody is on the run and you can bet there are a lot of people suffering around you.

This is the game that tells these stories. 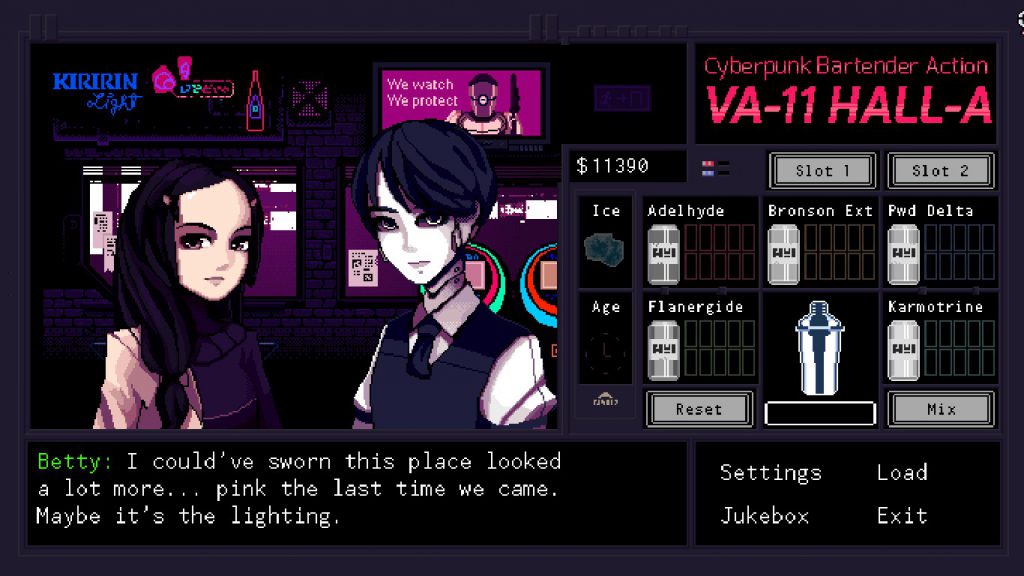 So you are a bartender. You might have a hard time making your first drinks, taking your time to double-check how much of each synthetic ingredient with a weird name you’ve put into your clients’ drinks. You need the money, after all: Jill, our protagonist, needs to pay her bills and is, on top of that, addicted to buying useless stuff for herself. Sometimes, your clients will ask for drinks in a cryptic manner and, if you haven’t bought what Jill wanted so much the day before, she won’t remember what people ordered. Otherwise, the gameplay is pretty much straightforward: my favorite drink is the Cuba Libre – sadly, the Valhalla, the bar’s nickname, doesn’t have it in its menu -, so you look for its recipe and make it. Sometimes you can change the alcoholic factor in a drink to make your client drunk faster and sometimes they’ll just ask for something spicy or manly.

Here is where VA-11 HALL-A shines the most: you serve drinks in order to talk to your clients, not the other way around. Jill only ever leaves home to work and only ever leaves work to go home, so you see actually very little of Glitch City, the terrible government, the famine, the hacker attacks, the corrupt militia and new incurable diseases originated from mankind’s ventures towards transhumanism. However, you sure as hell feel the world around you through the characters that come and go to the bar. It’s for the drinks they like, the stories they tell and jokes they crack that you play VA-11 HALL-A, and that includes Jill herself. They are all people you get to know and befriend, whom you serve drinks to in hopes of having them come again – the hacker, the clickbait site editor, the robot prostitute, the cat-girl, the quasi-android bounty hunter. 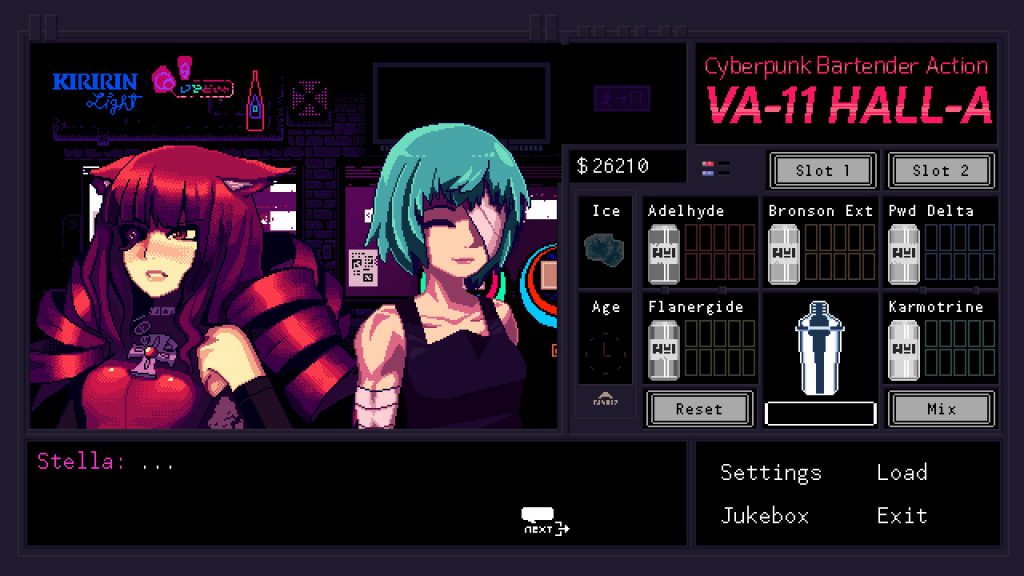 You experience the world through the characters, and the characters through booze. Bartending is your bridge to those people and that world, being also a choice system that will, at its hardest, require some lateral thinking or test your memory. And because mixing drinks for your clients – no, your friends – is the only thing you can ever do, it means you know there’s nothing you can do if they go missing for days or are worried sick about something they have to do. You can’t choose to save or protect them. You’re just a bartender.

In this regard, the cyberpunk aesthetics help to convey very human feelings: cross-fires are common, huge accidents and terrorist attacks galore. This is exactly what makes a regular show up again so satisfying – it means you’re not the only one getting by. This prosaic approach to a cyber-dystopia intensifies the emotional connection you feel towards the characters and their problems, since it isn’t all a metaphor or a warning to our world. It’s really all about them. 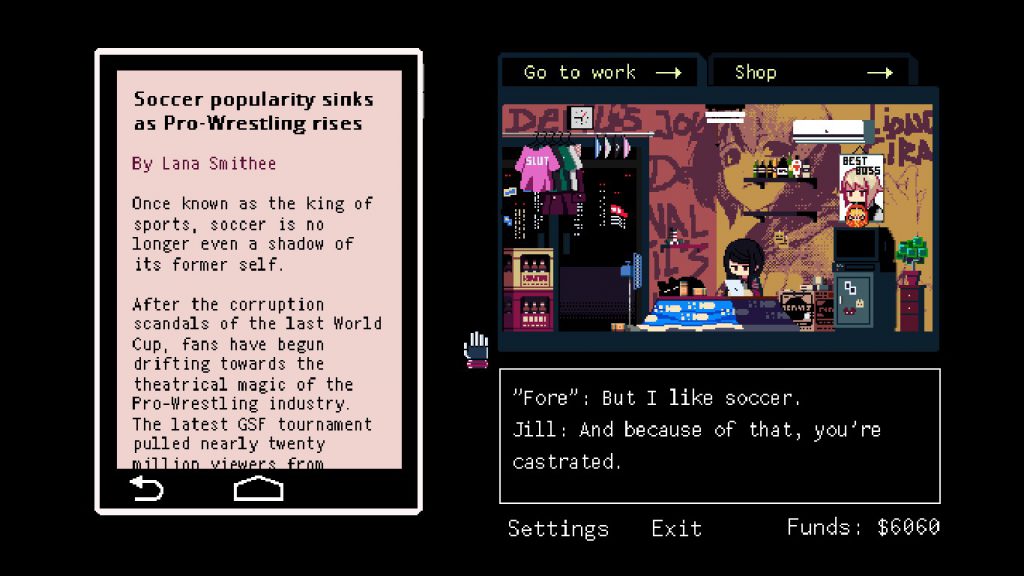 The game is especially careful when it comes to the writing and the art, in that the game hides a thousand little secrets behind its simple interface and subtle additional ways you can explore the world around you, such as a sensationalist news outlet, an imageboard, and television channels on the bar. It’s hazy, you may not fully understand what’s going on, but everywhere you look, there’s something new for you to notice that tells a lot about Jill, about the robot idol that held a concert in Glitch City just last week, about Alice_Rabbit – the world’s most famous hacker. The stories are imprinted on the world and, strangely enough, the fantastic music will always match the scenes even though it’s you who chooses the playlist every day out of the many songs you can pick up and unlock. A friend of mine called it the auditive Rorschach test.

VA-11 HALL-A is a game to relax. The intro itself says so. It’ll put you at ease, drag you into its world, and make you care for every single character as their stories unfold, intertwine, and are fueled by the nights they spend at the Valhalla. It’s a game for those who probably would like to feel the same – not in spite of Glitch City being a terrible place to live or the bar smelling like dog urine and hand soap, but precisely because of it.

- Menu can be clunky