The Higurashi: When They Cry series has claimed worldwide fame since the visual novel was released in 2002, receiving adaptations to anime, manga and live-action installments, besides remastered versions for console and portable devices. In 2015, MangaGamer brought it to Steam with Chapter 1, Onikakushi-hen. You may not really know the series, but if you have ever seen one of those Top Ten Brutal Anime Deaths videos, you’ve probably seen a little of what Higurashi is known for: a paranoia-inducing plot made of gore-filled scenes. Certainly not a story for the faint-of-heart.

Chapter 1, Onikakushi, introduces you to the protagonist, Maebara Keiichi, and both of you to Hinamizawa, the village where the story takes place. Keiichi shares a classroom with kids of different ages and educational levels and, in spite of the awkward setup, he manages to befriend five girls who spend most of the time playing board games and generally lazing around. The gang’s hijinks make up the majority of your time in Hinamizawa – you’ll be the victim of Satoko’s pranks, lose bets against Mion, induce Rena to a trance-like state by showing her something kyute, and be consoled by Rika when everything goes wrong with a pat on the head.

After a while (a LONG while, but more on that in a moment) the game’s atmosphere becomes as cozy as can be. Interacting with these people does give you the fuzzy feeling of meeting new friends and getting to know them better. I particularly liked Satoko – according to the Higurashi Wiki, her speech is supposed to be rough since she has many difficulties with grammar – the translation, at least and however, gives off the feeling of her speech being rough in the same way a foreigner’s speech is when they have studied your language for years yet have never actually been to your country – hopelessly correct, tacky and composed. It’s quite endearing, really, and many scenes can take you back to your own childhood with full force. 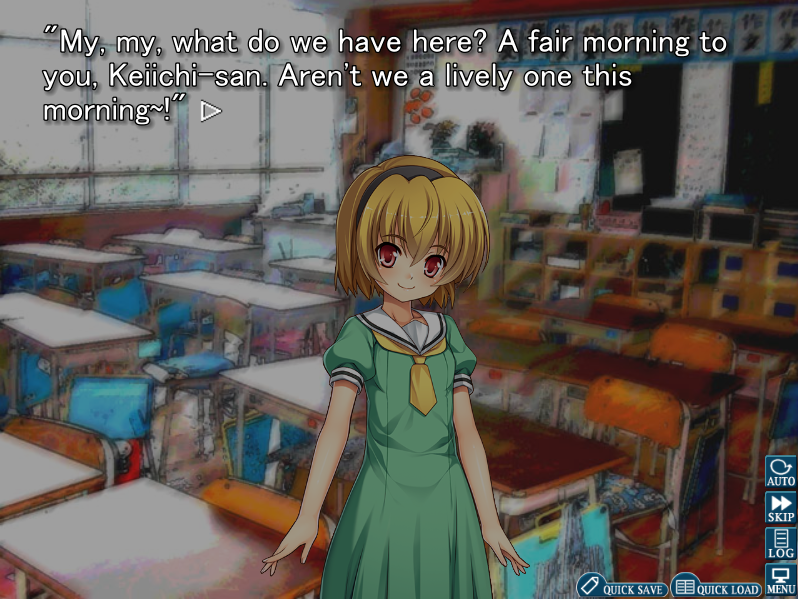 In the meantime, you’ll receive “Tips” at the end of each chapter – that is, separate scenes that highlight some aspect of Hinamizawa or the characters. And this is where the mystery starts – little by little, these Tips and some apparently inoffensive events in the story start turning the story into something darker and more mysterious: although you’re still playing zombie tag with your friends, there’s this feeling that something is looming around and your peaceful days are already over – you just haven’t noticed it. Now this is a very interesting structural approach to mystery – the complete disconnect between your common life and the lurking evil, slowly causing Keiichi and yourself to not know what to doubt first, takes the heart-stopping scenes to another level. Because every scene may or may not make your heart stand still.

However, it often makes everything sound a little silly. Until the plot actually becomes a full-fledged paranoia drama, every scene becomes excruciatingly hard to read if you’re not fully invested – and it’s very hard to be fully invested in them because absolutely nothing ever happens. So for the first four or five hours, you’ll be stuck in a hit-or-miss experience – and even after that, sometimes the disconnect from earlier will remain in the back of your head (why am I talking about demonic curses and dismemberment with the same people I was talking to about snacks and goldfish scooping just minutes ago?), making the whole thing feel as forced as it is engaging. It’s contradictory, so it depends on how much you are willing to suspend your disbelief. 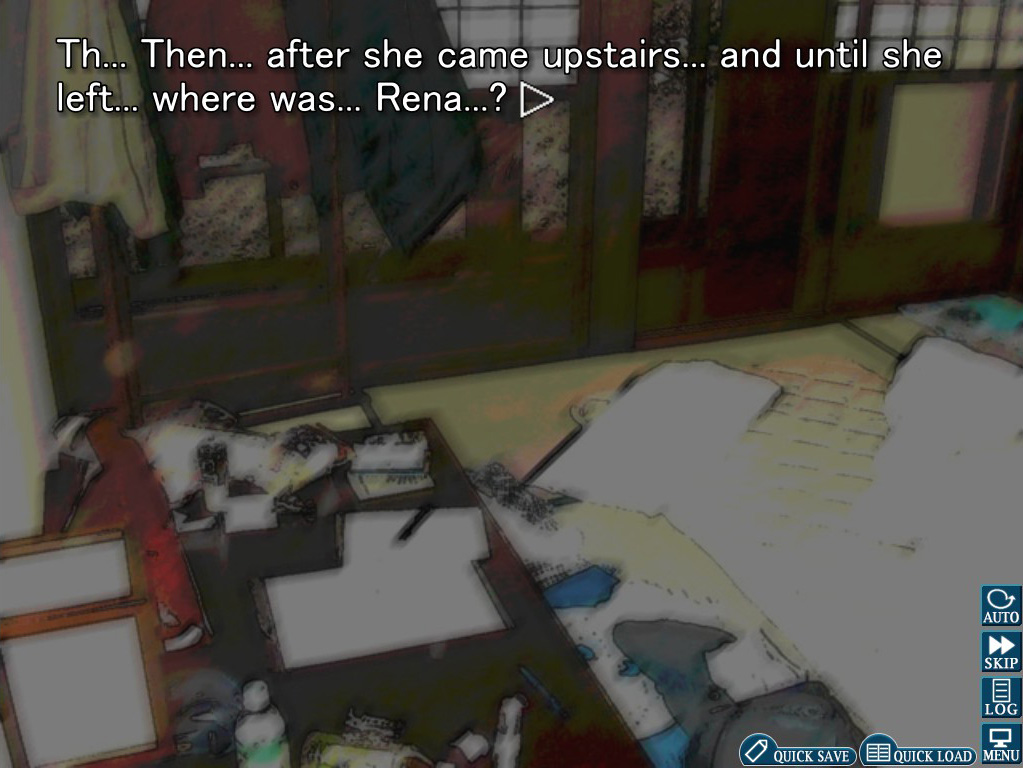 The 2002 sprites probably didn’t help much, but the new sprites do. They are pretty and have an unnatural number of expressions and variations, although they clash with the hideous backgrounds. That is to say, the people in the game feel very much lively, but the setting doesn’t. It’s yet another contradiction that makes the experience a lot better or a lot worse depending heavily on what you value most. If anything, the setting benefits greatly from ambient sounds and well-placed effects: they dictate the scenes’ rhythm and feel and somewhat make up for the very bare-bones presentation, still residual from the original version of the game.
So it’s another case of a visual novel that takes a long while to pick up, but is worth it when it does. It seems to be the case for nearly all acclaimed visual novels – ever noticed that? How much you’re willing to accept your classmates of wildly different ages can be a part of a vast village conspiracy or subjects of a long-running curse will determine how much you enjoy Onikakushi, but at least the shenanigans, both the childish and the serious, can be enjoyable in and of themselves. 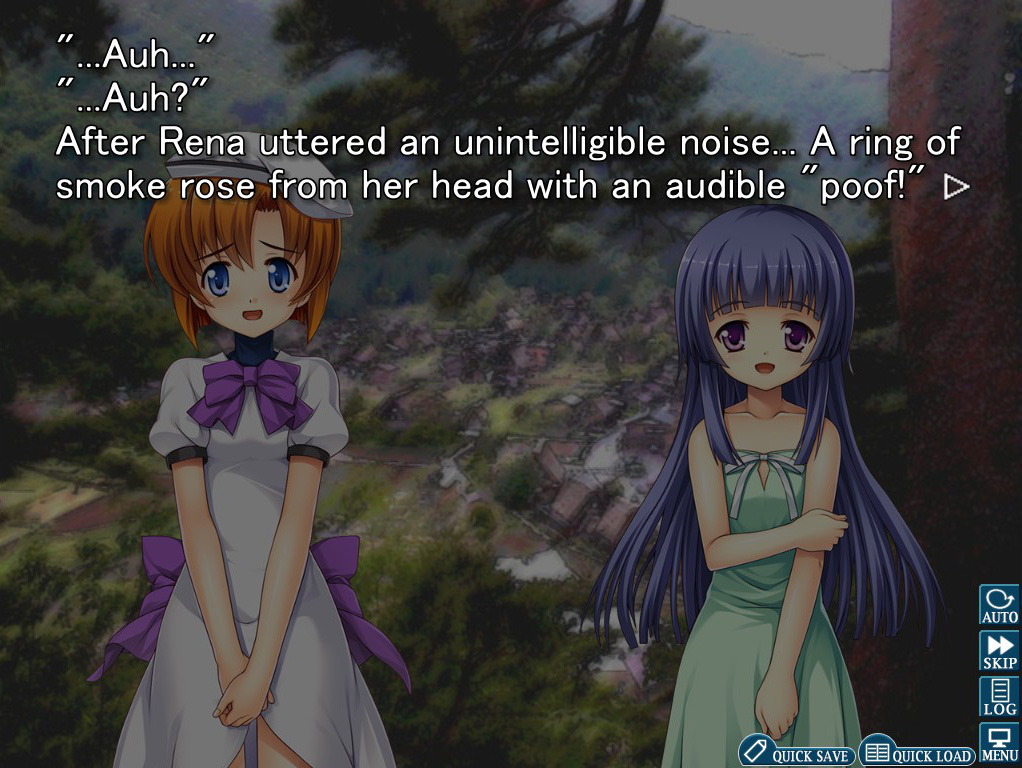 + How can a mystery story that requires so much suspension of disbelief be so engaging?

- How can such an engaging mystery story require so much suspension of disbelief?

- Not the richest presentation