You wake up in a mansion. A maid with long dark hair and jade-colored eyes stands before you. Your memories are gone, you cannot see yourself, and you aren’t even sure who you are. In fact, you wonder if you are even alive. The Maid standing before you, in an effort to help you remember who you are, offers to guide you on a journey through time, to view the history of the mansion, and the events that transpired within its walls.

These stories that The Maid shows you act as an “extended prologue” introducing characters and the mansion itself. It is clear right from the start that the mansion is not normal, and neither is The Maid. The two seem bound together for some reason, and as you explore the mansion’s history, you begin to uncover the truths behind it all. As I stated above, when you wake up, you have no concept of self, and as such, your thoughts are kept to a minimum, giving The Maid most of the screen time, which gives her the role of principal story teller for the first half of The House in Fata Morgana. It is a clever trick, that makes great use of the visual novel medium to toy with perspective, and flawed narration. In each of the stories, The Maid adds her own thoughts and commentary, shaping your view of the events that transpire. This portion of the VN, the extended prologue, sets and incredibly high bar with fantastic story telling. 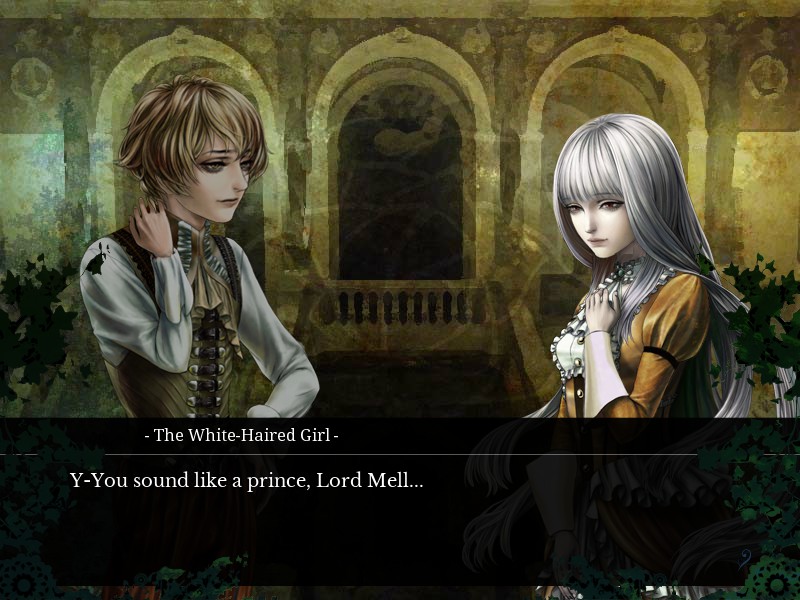 Each of the stories finds a strange White-Haired Girl acting as a catalyst for the events that transpire. The mystery of her identity only deepens with each story, as her fate seems to be set in stone no matter the time period. These individual stories that The Maid tells stand out as the high point of The House in Fata Morgana and in fact, tower far above any other VN I have read in terms of quality and story telling. Each tragedy that unfolds has its share of sympathetic characters, antagonists, and frustration and I constantly found myself wishing for a better outcome, knowing it was impossible. Watching the events happen is like watching two trains steam towards each other. None of the passengers know what is coming, but you do. It is the same feeling reading these prologue stories. The characters have no idea of what is coming, but you do. It filled me with a sense of dread and suspense, waiting for everything to start falling apart. 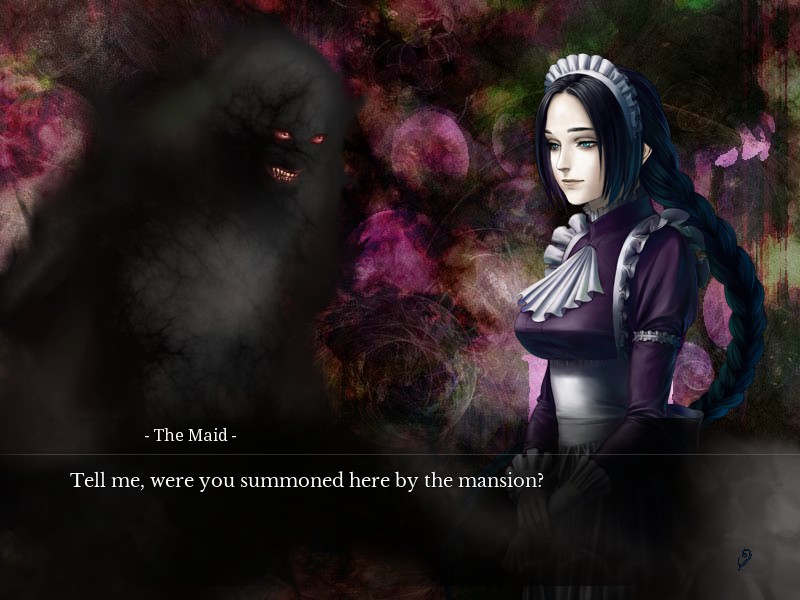 Problems begin to arise when the story proper begins, however. While the story is still rather enjoyable, things start to drag, with repetition, and point of view changes cause the reader to go through the same scenes multiple times. This would not be an issue if the writing staff had simply skirted around the stuff we already knew, and shown us mostly the new information. Instead, the same monologues and lectures we get from one perspective, we get again from another perspective. This issue is most prevalent in a 4 hour chunk right before the finale. It was without a doubt, the slowest, dragged out part of an otherwise tightly bound narrative. The fact that it occurs so close to the end does not do any favors for lasting impressions either.

As for the actual story, ignoring the problems mentioned above, it’s damn good. It is a story of anger, hatred, tragedy, forgiveness, and redemption. As the VN goes on, it begins to tie back with the extended prologue I’ve mentioned a few times. Everything ends up coming together, but not in one spectacular reveal. It is a slow burn of reveals, instead, pacing itself very deliberately to give the reader time to recover from many of the emotionally tiring sequences. This is not a story geared towards your average VN reader who demands that their story go through a checklist of various tropes and fetishes. The writers instead set out to simply tell the story they wished to tell. This results in a read unlike anything else on the market in the West, which is a shame because the West needs more VNs like The House in Fata Morgana. 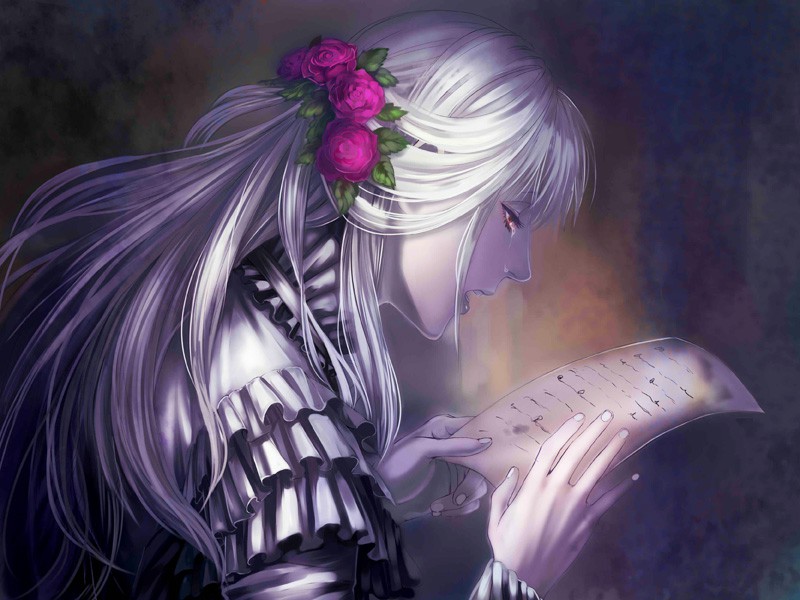 When you boot up The House in Fata Morgana, you will see a message recommending the use of headphones while reading the VN. This is because of the phenomenal soundtrack. Utilizing extensive vocal tracks, the music sets the tone for each scene perfectly. During the prologue sequence, the music changes with the time period, helping to set the period and tone fantastically. Sometimes, though, the music can be a bit distracting due to how “large” it can be, so to speak. The main example of this is in the 1800’s time period of the VN, which uses a very big vocal track, which helps set the mood and tone of the period, but also can be distracting when trying to read. This is a very minor complaint from me, but other readers may find it off-putting. That aside, I agree with Mangagamer’s recommendation to play Fata Morgana with headphones on.

Finally, and I saved the best for last, the artwork of Fata Morgana is breathtaking. While the background art is typically blurred images with dark color usage to help set the atmosphere, the character art is incredible. Forgoing the typical “anime” art style, Fata Morgana features a Gothic-inspired style, with dark eye outlines, pale skin tones, and soft coloring combined with the blurred, dark backgrounds. The colors are subdued, to aid in giving the reader a dark, somber atmosphere. I had people ask me on Twitter, a few times, if Fata Morgana was an EVN due to the art style. It is quite unique, and refreshing to see in a market saturated with “samey” art. 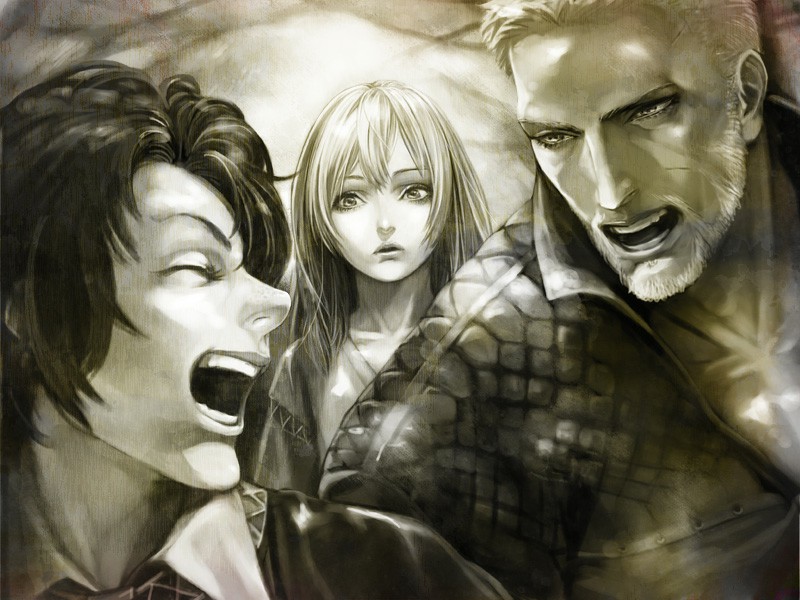 The House in Fata Morgana is a flawed VN, due the dragged out story near the end of the VN. The VN will take about 20-25 hours to read through, and that 4 hour section near the end was unfortunately enough to sour my impression of the VN. With that being said, Fata Morgana is still my new favorite VN in spite of its few shortcomings. With spectacular art, a fantastic story, and otherworldly music, I wholeheartedly recommend this visual novel to anyone looking for something different from the standard VN fare. I personally have bought three copies already for myself and friends, and I do not regret it one bit.

You can purchase The House in Fata Morgana here.