“1947, in a criminal underground. Bodyguards wanted.”

Rose Guns Days is the fourth series published by 07th expansion, best know for the “When They Cry” series, with the first season being put up for sale in 2012 and the last being released in 2014. As with all other games by the company, the story doesn’t have any H-scenes.

RGD takes place in an alternate universe where, after a big natural disaster, Japan was forced to surrender during WW2. American and Chinese forces entered the country, both competing to reconstruct it and bringing large waves of immigrants, almost making Japanese people a minority within their own country. The game’s setting does wonders for its themes – misery, prostitution, low-wage employment, and high criminal rates are all very well portrayed in the story, which is of major importance in drawing you into the universe of the series.

The game follows two different timelines – one starting from 1947 and going until 1950, and one happening in the 21st century, in 2012. Rose Guns Days has four seasons, but ultimately, the story can be broken down into 3 parts, with two very different atmospheres.

To talk about that story, however, one must first know about Primavera. Primavera is what links the two timelines together – being essentially an union of brothels led by a clumsy, idealistic girl named Rose in 1947… And being a rather extreme nationalistic mafia in 2012. The game can be described as one big interview. The 21st century timeline is generally developed at the beginning and ending of each season, where the current leader of the organization is telling the story of what happened in the 1947~1950 timeline, and what made Primavera the mafia that it currently is. The protagonists change with every season of the story, but one way or another, they are all part of Primavera. 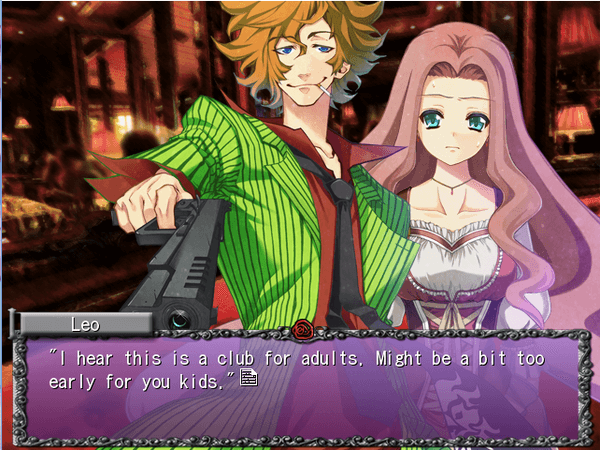 One thing the game must be praised for is its pacing. RGD is a very long VN, but it still manages to be very quick with its start and charming all the way through, and there are almost no scenes which could be considered useless, the story grabbing you from its very first lines. Compared to other VNs of the type that will force you to go through hours-long prologues that are as boring as dirt, Rose Guns Days will be lightning-quick to sell you on its premise, and will continue to be entertaining all the way through the game.

Another very good aspect of Rose Guns Days is its soundtrack. It has a variety of very good and unique music, with several jazz tracks that are a treat to the ears. The game also touches on techno and metal sounds. Either way, RGD has a plethora of great music, and all of it is used timely and expertly to deliver maximum value on each and every one of its scenes.

The artwork is a bit more tricky… Rose Guns Days’ characters generally have very good designs (thank goodness Ryukishi decided to actually have other people draw everyone important), but oftentimes their sprites are lackluster on specific parts of their drawing (you’re better off not looking at the fingers of most characters, as a rule of thumb.) The art gets better with each season, and some characters are drawn exceptionally well… But, in return, you absolutely have some losers in the artwork, especially in the first season. In the end, the art is generally good and pleasant to look at, but not amazing.

The last technical aspect of the game to touch on is its gameplay. Ryukishi has never been too good with writing fight scenes, and that would normally be quite a problem in a story as action-packed as Rose Guns Days. Instead of doing that, he opted to have minimal writing in battles and leaving the fights to a screen-clicking mini-game over stylistic pictures (which are very well-drawn.) It’s a bit odd at first, and it’s a small flaw throughout most of the first season… But over time, the game starts aiding in battle immersion, particularly when other characters are introduced (you’ll start feeling super grateful for Leo’s ridiculously large hitbox in attack phases when you’re trying to hit Nina’s weird sling shots in season 2 – which actually adds quite a flavorful way to distinguish the character’s fighting skills.) You do have the option to skip all gameplay with the spacebar… But it’s not something I really recommend, since without that, fighting scenes are quite hollow. 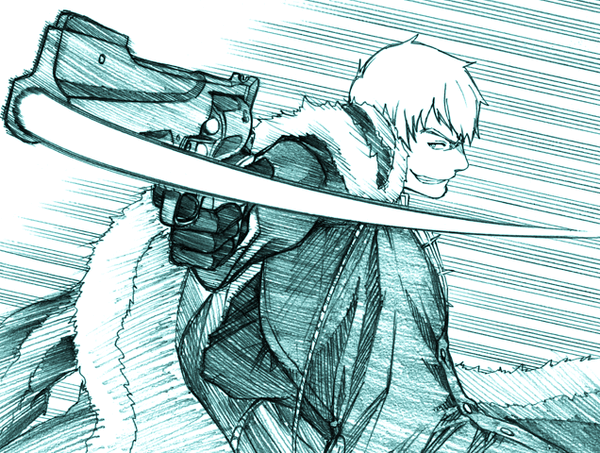 The game starts off quite cheerily, with a very charming cast that’s quick to make you love them. Rose Guns Days delivers its emotions very well, and you’ll probably find yourself laughing and crying with the characters before you realize it. The cast is developed in a superb fashion, and by the end of the story, you’ll have come to sympathize with all of it, including all of the antagonists.

A lot of the game’s plot and character relationships are exquisite… To fully enjoy Rose Guns Days, one must understand the differences between the Japanese, Chinese, and American people and cultures at the same time, and how they relate to each other. The story often takes the relationships between Japan and China in the last few years as inspiration for its plot, which might actually make the game’s learning requirements quite unreasonable for most people… On the other hand, this creates a holy grail of fun for anyone who is familiar with those happenings, delivering something great and unique that you won’t be able to find in the vast majority of VNs.

The fact the story runs in those different timelines has very interesting effects on the game. While it may look like the 21st century story doesn’t offer much more than some commentary on the more prominent 1947 story and a convenient way to end seasons, it actually does a lot more than that… Because, from the very beginning, you’ll know where the path our gallant protagonists are treading ends. This adds a very dark shade to Rose’s ideals of protecting her Japanese countrymen and culture, which are a very important part of the story. Keeping to that motif of darkness, the final arc can be soul crushing… People you’ve come to love die, betray each other, and the story is taken over by a very heavy aura of despair.

So, should you play Rose Guns Days?

If you have any interest in this type of story, definitely. The game delivers everything it’s supposed to in an excellent fashion.

+ Exquisite, masterful use of the setting and themes of the story

- Poor use of the gameplay in the first season