Every so often, an individual will take a piece of work that they loved, and either expand upon it or retell it in a fashion they see inside their head. This would seem to be the case with the recently released visual novel, A Little Lily Princess. Developed under the Hanabira name of Hanako Games, the game is a retelling of  Frances Hodgson Burnett’s A Little Princess: Being the Whole Story of Sara Crewe Now Being Told for the First Time, where you take the role of the heroine, Sara Crewe, as she adjusts to living in a boarding school in turn-of-the-century London.

Released as a children’s book in 1905, the book had its share of movies and television shows created out of the material over the years. For this work, the author has used many portions of the actual book (legal for those wondering, as the work was created before 1923 and is considered public domain) and has added her own portions as well. We’ll get into the content changes later and start with the basics of the game.

The mechanics of the game are something somewhat different than most visual novels or simulations I’ve seen. You don’t make any choices during the actual text, instead each week you are presented with your options of what to do in Sara’s free time (it’s assumed you go to classes and follow all other protocols of the school). Each choice gives you a resource used to unlock the six available character routes. However, it’s more like playing slots then actual resource gathering. Usually with resource building you know what you’ll get, i.e. if you send your character to mine rocks, you’ll get rocks. That’s not necessarily the case in this game – each free time action you pick has three potential results, and the results may not come up with what you want. 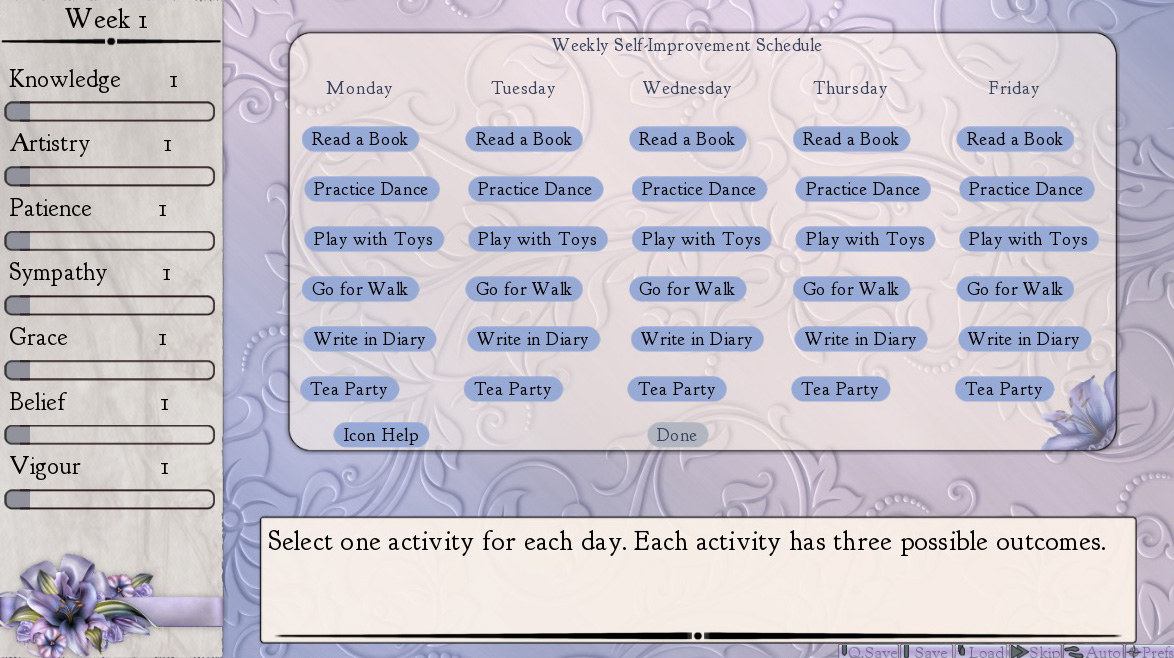 What’s a little princess supposed to do to occupy herself?

For example, you can have Sara practice dance, which can grant you either 2 artistry and 2 grace, 1 each of vigor, patience and grace, or double your vigor score. If you’re looking for vigor or grace this may be a help, or not, depending on which result pops up. It may be a little frustrating at times when you’re looking to get a certain resource so you can read a part of a route requiring it, as only a few selections guarantee you at least one of a resource in all three options. Of course, if you’re only going for a selected character you can save what you have and ignore the other routes, but you’ll never get the “Practically Perfect” Steam achievement doing that (you need to read everything available and have max-10 scores in everything to unlock that). It’s an interesting, if slightly frustrating, way of presenting the game, however the only drawback is you may not be able to unlock all routes in one go.

Being billed a visual novel, the game certainly relays the story as one. The visuals are the standard sprite-against-background type, and all are done rather well. The backgrounds, in particular, do a wonderful job of relaying a late 1890’s/early 1900’s boarding house as well as the cobblestone outsides for the period. The sprites are somewhat hard to describe. They’re meant to mimic more Japanese-style sprites but appear more Americanized, aside from the humongous eyes the young girls all have. Though it appears adulthood shrinks eyes, as the adult sprites all have normal-sized eyes. Regardless, they’re drawn rather well. The only sprite who changes is Sara, as she has a few different outfits she wears depending on where the story is at the time. The CG cutscenes are wonderfully done. And topping it off, the game maintains a children’s story feel with its addition of selected chibi scenes.

The hair bun. The glasses. The black dress complete with bustle. SHE’S EVIL!

If you like piano music and other period-appropriate pieces you’ll love the score for A Little Lily Princess. It draws heavily from Francesco Giovannangelo’s Toward Imaginary Worlds as well as Peter Cavallo’s Secret. As both works are neo-classical, it gives the background music a good sense for the time and setting.

This brings us to the content of the story. For the most part, the theme of the story stays true, and most of the cast is brought over from the book. Miss Minchin, the proprietor of the school who cares little for girls and much for money, is the main antagonist. Then there are the other students – mean girl Lavinia and her tag-along best friend Jessie, earnest but not overly bright Ermengarde, and loud, younger brat Lottie are present, and all have their own routes. Orphaned scullery waif Becky shows up later, and has the distinction of being the true route (as her story is the one that the book keeps to). The final route is an invented character in Sara’s personal maid Mariette. Depending on your viewpoint, this is either an acceptable and understanding addition, or an abomination to the original work. I fall in the former camp, personally, as her inclusion makes sense considering Sara’s starting station, and it adds an extra dimension to the game when you follow her route.

The main difference between the book and the game, however, would be the addition of the romance in certain routes. In the book there’s no mention of anything of the sort, which makes sense because in 1905 Burnett would never have found a publisher willing to put out a book with overt romance between young girls. However, that’s not to say that the idea might not have been hidden in the original work. With the book’s timeline spanning over several years (the game condenses it to weeks) it’s certainly plausible that the charismatic and thoughtful Sara might have spurred romantic feelings in one or more of the girls. That’s explored a little bit in some of the routes available. 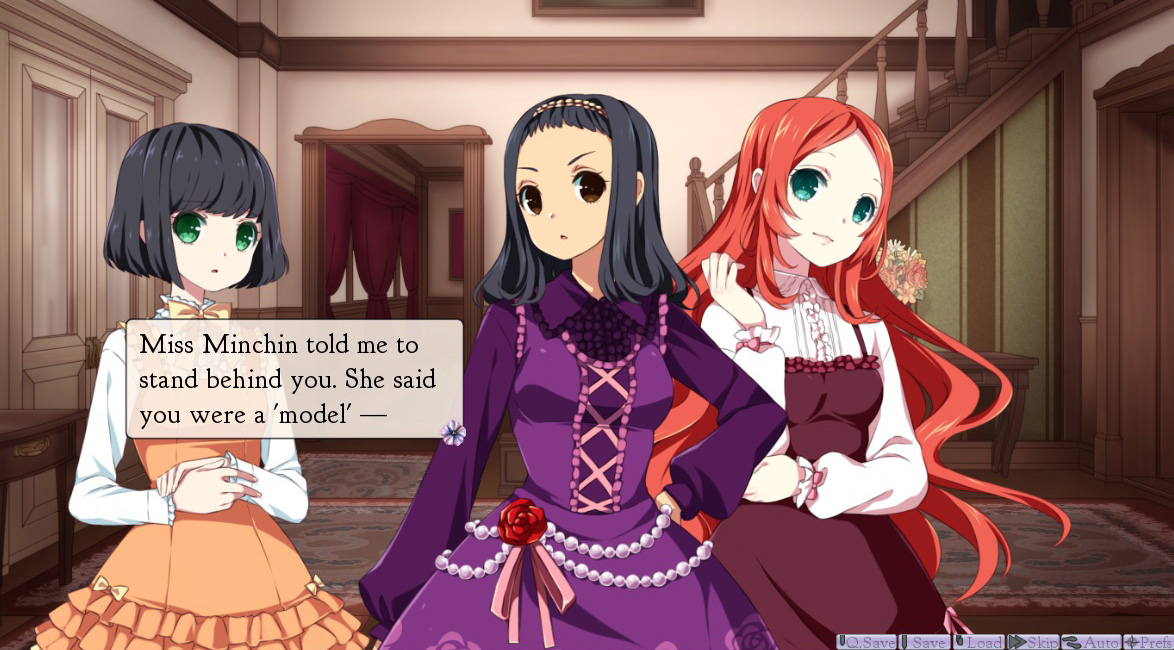 Three’s a crowd, even when forming a straight line.

To be sure, the romance is very light to the point of innocence. You aren’t going to find anything sexual at all here, which actually keeps to the time period in terms of writing as well. In fact all of the romance routes are left very open-ended, which also makes sense. Late-year teenagers, especially back then, rarely have a sense of their sexual identity. It’s left to the player to imagine whether or not any of the romances truly blossom later on, as Sara leaves the boarding school under different circumstances for all of the girls. In short, it’s very tasteful and thought-provoking. And no, Lottie’s route does not involve romance, but has a different viewpoint of love all of its own.

Overall, there’s very little to fault here and much to praise. The game mechanics may be slightly frustrating, you may not like the addition of a character not in the book, or the idea of innocent exploration romance also not present in the original work. It doesn’t change that fact that it’s all put together exceedingly well. It’s certainly different, and can be very thought-provoking if you let it. Or it can simply be a charming retelling of an old classic with a couple extra bells and whistles. However you view it, I highly recommend adding it to your collection.

You can purchase A Little Lily Princess via Steam.

A key was provided from the publisher for the intent of review. Thank you!

+ Intelligent and charming retelling of a classic story.

- Some may find the weekly planning tedious or frustrating.

- Some may object to the added romance, or the lack thereof where it is added.