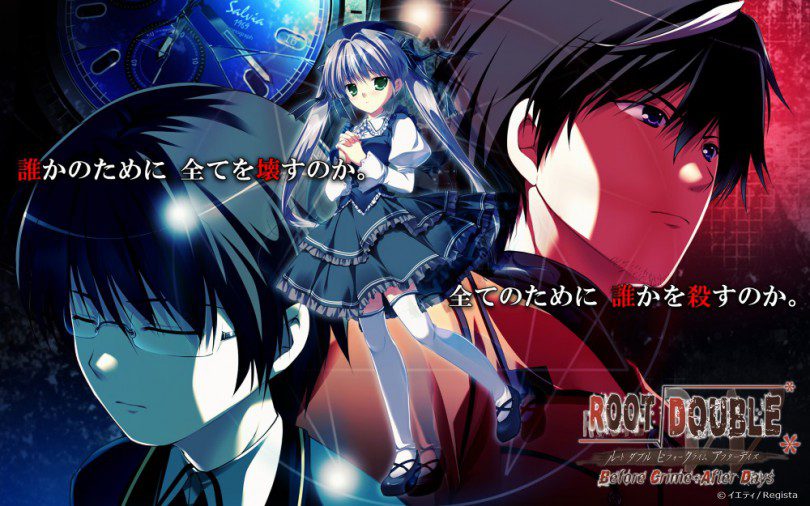 Root Double isn’t a visual novel we’ve heard a lot about before its early 2016 Kickstarter campaign, but it was quietly among the highest-rated VNs within the community. Directed by Nakazawa Takumi, one of the minds behind the Infinity series including Ever17, Root Double offers the promise of a similarly mind-bending suspense/thriller. Does it live up to its promise, or is it a pale imitation of those it draws its influence from?

In the world of Root Double, telepathy has been proven to exist in the year 2014, and the world was quickly thrown into turmoil over the news. These so-called “communicators” suffered from discrimination and intense media scrutiny. In Japan, their solution to the problem was Rokumei City, and other cities like it, where communicators were welcomed and protected from discrimination, in exchange for cooperation with research efforts. Rokumei City became a booming research center not just for telepathy, but for all manners of advanced sciences. Tucked away in the corner of the city lies LABO, a nuclear research facility that at the start of our story suffers a catastrophic disaster of unknown origins, and whose reactor melts down with 9 survivors still locked and trapped within.

Root Double opens as a rather simple survival story. The protagonist, Kasasagi Watase, is an amnesiac rescue worker who remembers absolutely nothing about himself. Together with two other rescue workers, they set out to collect any remaining survivors and to find an escape route before the radiation poisoning kills them. The player is given a great deal of control in this scenario. There are a LOT of choices. Most of them only seem to affect dialogue, but many of them also present you with options on how to deal with situations such as fighting fires, how search teams are divided, etc. There are no real major branching routes, so to speak, but there are a plethora of bad ends waiting along the way and multiple final ends as well. At times, I found the survival aspects of the story to actually be a bit too standard, and kind of dull as a result. But as the game trickled in the mysteries, I found myself rather addicted, dying to know what happens next. 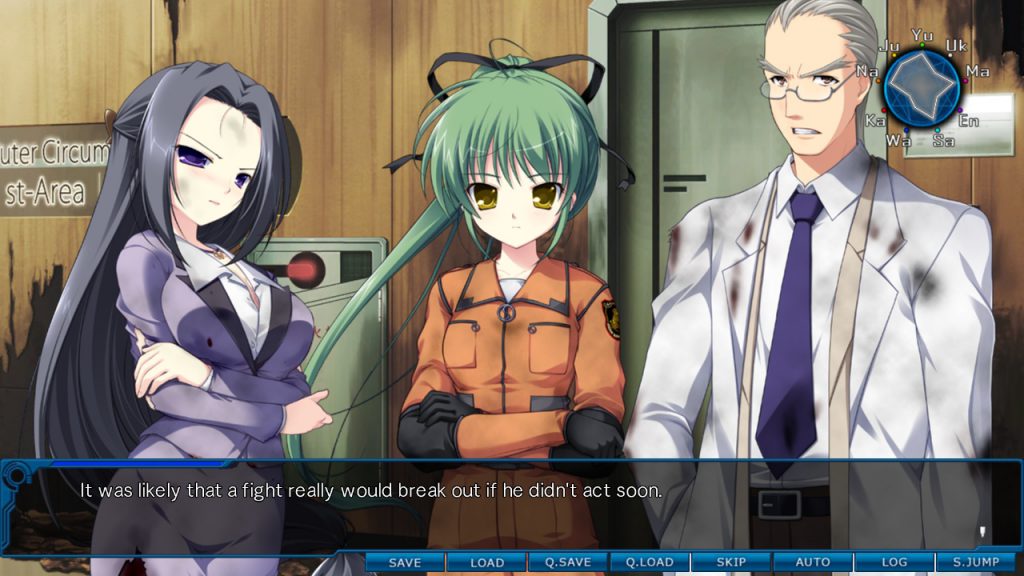 By the time you start reaching the end of this first scenario, you’ll have more questions than answers. The game is certainly not shy about laying on the mysteries thick and heavy during its first half. And when the game transitions into its second scenario, “Route B,” I experienced some of the most baffling yet coolest story moments I’ve ever witnessed in a VN. Route B features a new protagonist, and is set in the week leading up to the LABO disaster. The protagonist is Tenkawa Natsuhiko, a first-year student in a high school for communicators in Rokumei City. The story focuses on how he, his childhood friend, and the mysterious new transfer student end up entangled in a complex plot that could threaten the entire city. The new characters it focuses on are honestly quite endearing, and you learn a lot about not just them, but many of the other characters that end up in LABO. For whatever reason, they allow you to play Route B before A, but I would strongly recommend against this, as reading B first would remove a large chunk of the mystery in A, while the opposite isn’t true at all when reading A first.

Much of Route B is actually a somewhat standard slice-of-life story. These scenes are often charming, and are effective at getting you attached to the characters, but can sometimes go on for a little too long. The change of pace from Route A’s desperate survival story is rather shocking, but they take advantage of the laid-back pace in order to introduce the “real” Root Double, a story of surprisingly complex and mature themes. We learn about Rokumei City’s history  and the many evils that lead to the situation developing the way it did. Root Double examines discrimination, segregation, terrorism, information control,  and the relationship between security, convenience, and privacy, among many other heady societal issues. And that it does so in a setting that so greatly resembles our own real world instead of some hellish dystopia is actually pretty interesting. 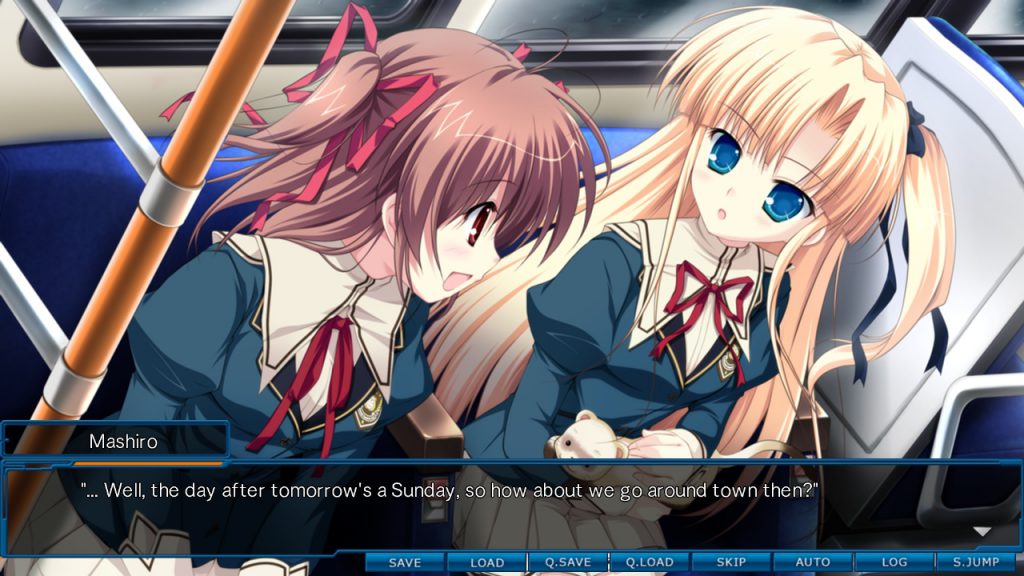 But Root Double‘s handling of these issues is also among its biggest downfalls. It is here that you realize that Root Double is much better at asking questions than it is at answering them. While I’m happy that they address these complex themes at all, I found that the game covers them in a rather brutishly ham-fisted manner. For just when you think the game is taking a mature look at its complex concepts, it will slug you in the face with an a monochromatic answer that leaves little room for interpretation. This is a problem that only gets worse as the story develops. The story tears down the moral grey area it was so carefully setting up and replaces it with wall clearly dividing the unambiguously good and evil. This often leads to some rather trite story moments, and it can occasionally get downright cheesy. It’s the same kind of approach that’s endemic among most VNs and really, most of Japanese media, but it was especially disappointing here because I had hopes that it would handle things better.

Unfortunately, Root Double is just as poor at answering the questions posed by its many mysteries. As I mentioned earlier, Root Double is actually very good at building its mysteries and stringing you along, desperate for the solutions. These moments of awe and wonderment at the intricate web of mystery the story constructs are absolutely the best moments in the game. But as fun as these moments are, I often found these mysteries to have some of the most boring outcomes possible. Not to mention that the twists are frequently seen from a mile away. And towards the very end of the game, I felt like the pacing suffered from a constant stream of flashbacks. It’s still a good ride along the way, but the destinations honestly left a sour taste in my mouth. The saving grace is that the true ending was actually pretty satisfying, with a rather fulfilling epilogue. It didn’t quite go to all of the places I wanted it to, but it still ended on a good enough note for me.

I’d also like to give a special mention to the choice system Root Double employs. As I said, there is a very large number of choices. Except these aren’t standard choices where you have multiple clear-cut options available for selection. Instead, it contains the “senses” system where you input affinity values for each relevant character at the branch point, giving each one a value between 0 and 8, and depending on what values you input the current protagonist will act differently. You can only ever do this at the designated branch points. It’s an incredibly confusing and opaque system where you have an incredible number of possible choices at your disposal and it’s way too hard to know what any of them will actually do. That most of the different permutations end up doing the same thing makes the entire system feel completely unnecessary. The end result is that the game requires a lot of saving and loading in order to get the results you desire. And even with this saving and loading, I’d argue that the game is still borderline impossible to achieve the true ending for without a walkthrough. 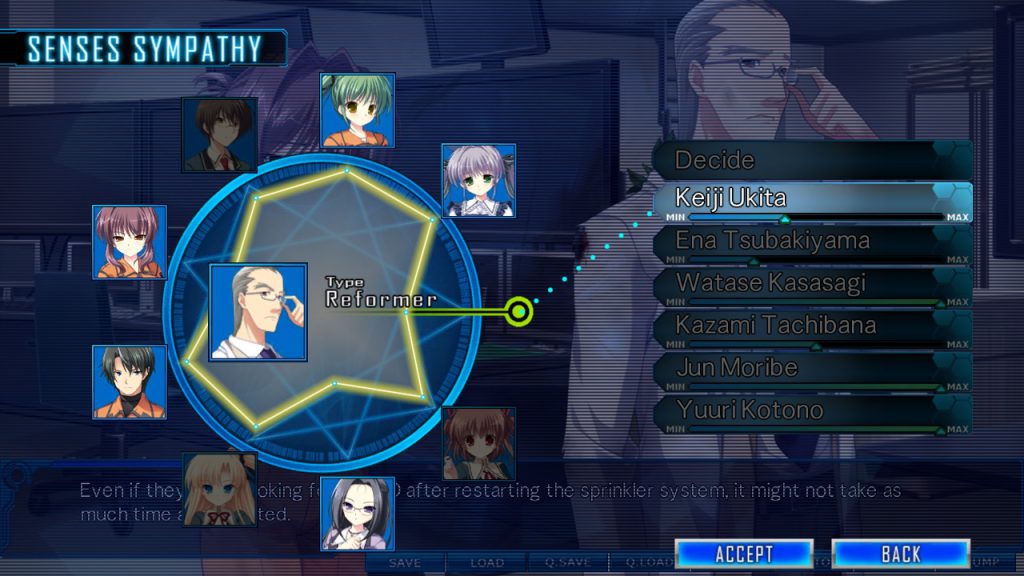 I found the writing to be pretty bland. It just lacked any sort of flair. The characters were all quite endearing, but I felt like their personalities didn’t come through in the text as well as they could have. And the event narration was rather dry and matter-of-fact. It’s hard to tell how much of this to ascribe to the translation, and how much to the original writing, but I’ve been told that the Japanese version was quite bland as well. They’ve also translated the honorifics, which normally I’m okay with, but they took a bad approach to it in this case. Even classmates will refer to each other with Mr. and Ms. I shouldn’t have to tell you how unnatural that sounds. Thankfully, cases where this happens aren’t all that frequent.

The art was sort of mixed for me, I wasn’t a major fan of the art style employed. But it was well-drawn overall and there is an abundance of CGs to illustrate each scene with. The music was also okay, but nothing special overall. There were one or two stand-out tracks amidst a lot of pretty okay mood-setting ones. The voice acting was only so-so. Even though it’s a game that only has all-ages versions available, they seemed to have cheaped out and hired mostly less expensive eroge voice actors. They still did an okay job, but there weren’t any real stand-out performances among the cast.

In the end, I still have to say that I enjoyed my time with Root Double. The characters were charming, the high-tension story hooked me, and the ride it took me on was still pretty fun, even if the destinations were lackluster. I found it to be an above-average experience to be sure, but it was also still a disappointing one. With some better mystery solutions, a less frustrating choice system, and some subtlety in its storytelling, it could have easily become one of my all-time favorites. Instead, it’s just pretty okay.

Pick up your copy of Root Double here! | VNDB

+ Suspenseful story that will keep you glued to the screen.

+ Endearing characters with a surprising amount of backstory.

+ The game extends far beyond its survival premise and tackles some complex themes.

- The handling of the aforementioned themes completely lacks any subtlety and leaves little to interpretation.

- Occasional uneven pacing, especially towards the end of the game.

- While the mysteries were good, the revelations often felt underwhelming.