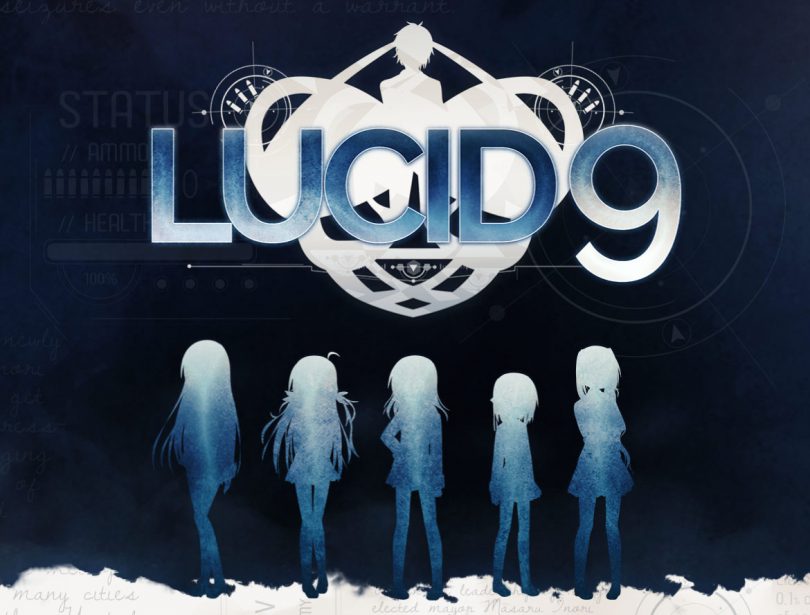 An Original English Language Visual Novel set in a Japanese High School – it’s pretty much a trope in itself. It seems almost inevitable when a group makes an English visual novel that the setting tends to go towards their most basic reference points, Japan and high school. After all, so many different mediums of Japanese entertainment are set there. The setting of Fallen Snow Studios’ first release, Lucid 9, isn’t exactly a divergence from the norm, not that it has to be. A typical setting can bring about a good story, after all. Keep in mind, however, that this is an incomplete story thus far. The first part of the story, entitled Inciting Incident, takes you through what most would call the “common route” of a visual novel. A second half, which would be called the “waifu route” is slated to be released… sometime in the future. So for now, let’s focus on the common route. (Okay, fine, it’s “heroine route.”) 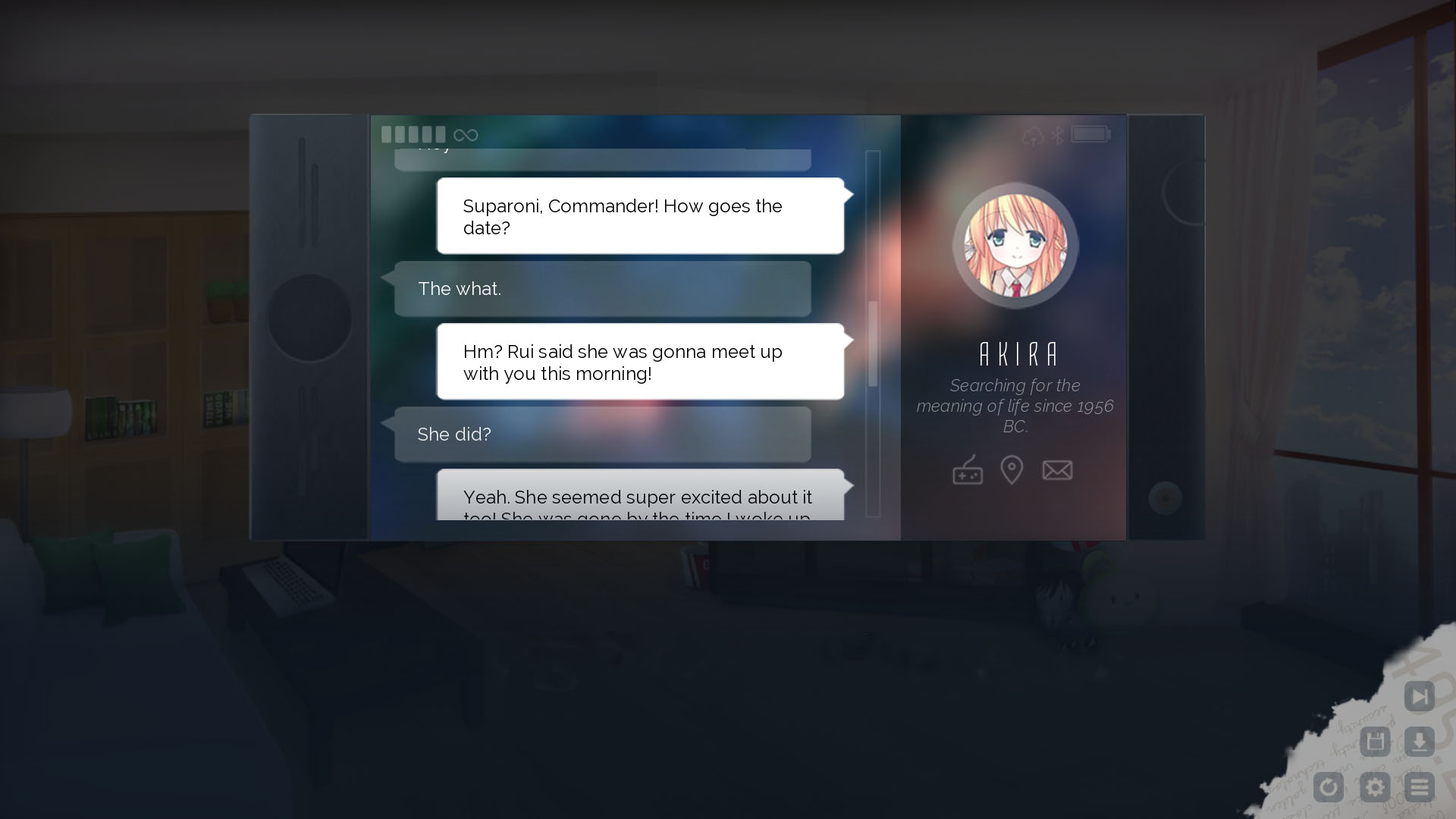 Checking my phone… are you my waifu? WHEN?!?

Lucid 9 takes place in the fictional Japanese town of Isamu, where our protagonist, one Yama Ishimoto, attends a prestigious high school with his cadre of friends. Yama displays many typical traits of your average visual novel protagonist – smart ass, parents aren’t around, continues to waffle about the girl who’d clearly do anything for him (that would be Rui Hayata), and obviously has had some sort of tragedy in his past. In short, you’ll probably go back and forth between wanting to kill and hug him. The school year is just beginning at Yama’s school, and your first couple of days will be spent pretty much being a teenager at a Japanese High School. Going to class; getting sent to Mr. Ryouta for guidance because you’re an unambitious, mouthy punk; trying to avoid joining track, despite the best efforts of your friend, one Masato Kurogane; teasing your imbecile friend, one Yahiko Ikari. In short, you’re a high-school kid. Then one day, walking home from school, a plain-clothes detective named Shigure Enomoto stops Yama and basically enlists him as her minion. Why? There’s been some mysterious disappearances around the city of Isamu, and all of the people that have gone missing are from Yama’s school. For whatever reason, she can’t seem to get in to investigate, so she needs an insider. Yama works as well as anyone. And thus, the story goes forward with Yama helping out and trying to track down the kidnapper, all while having his choice of girls to attempt to impress along the way, although you won’t see the fruits of those efforts until… sometime. 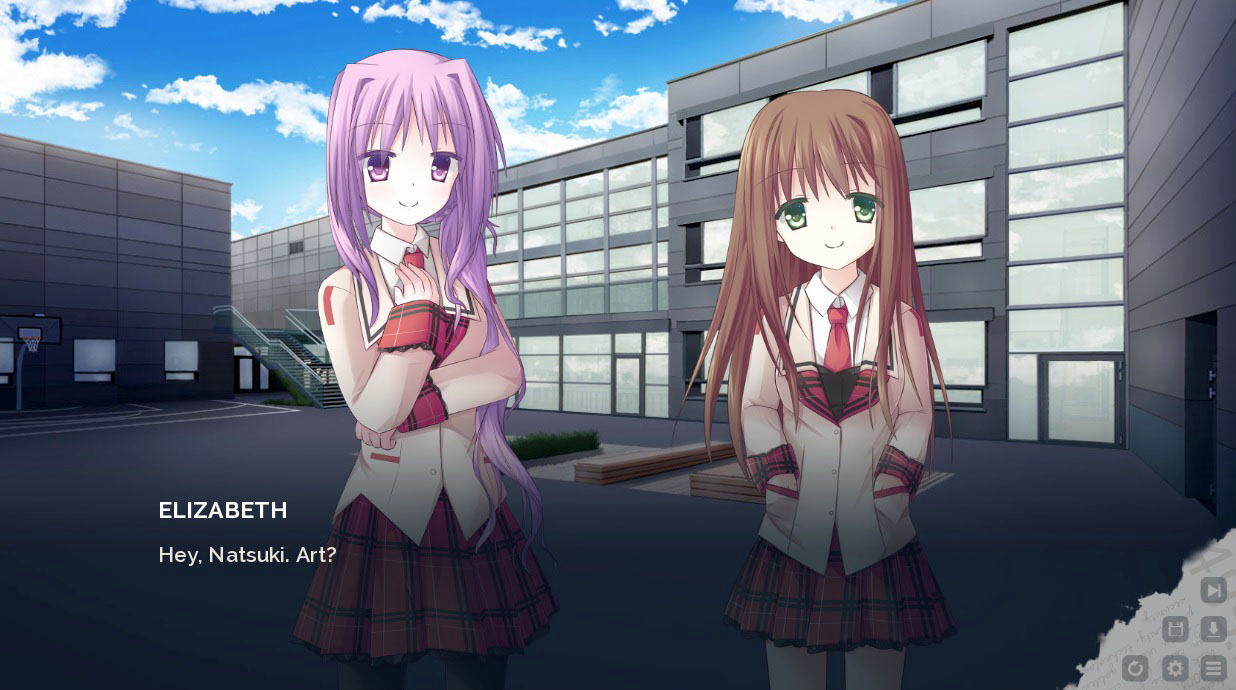 Can I interest one of you ladies in a romance route sometime in the future?

Keeping all of this in mind Lucid 9 is a fairly well-polished entry into the market for a studio comprised solely of individuals in different parts of the globe, working in their spare time to create a visual novel. The story progresses daily as the mystery deepens, and Yama becomes more aware of what’s going on in both the town and with the people around him. You can clearly see where the writers are setting up waifu routes for the various girls, and at its best, the writers give some very good psycho-babble as an insight into the different characters in the story. The main problem in the story is that some of it gets a little too indulgent of itself at times, which can make for places where you just feel like clicking through to get on with it. For instance, if I wanted to read a story about a group of friends around a table playing a role playing game, I’d pick up a copy of Knights of the Dinner Table – it’s shorter and funnier. It doesn’t happen too often, but at times the story does drag a little in that respect. Overall, it’s a solid script with the only holes being left where the story should be picking up when the second part comes out. Also, that trope I mentioned at the beginning? The story does rise above the trope setting. The character interaction seems more realistic then standard, and the typical, overused cliches are nowhere to be seen. At its best, the psychological aspect of the story takes over and gives some thought-provoking narratives. Lucid 9 manages to tread between being both light-hearted and dark, without completely falling into either. It’s rather satisfying in that respect. Much like another mystery visual novel that was just released (Impact!) Lucid 9 also attempts to engage the reader in the story by giving some hands-on parts to play through. It ranges from the forgettable (making you take a pop quiz in class) to the more thought-provoking (solving riddles). It also has some deduction work through choices, but as far as I can tell, you eventually stumble upon the correct answer no matter what, though it is satisfying when you see your thought process confirmed by the text. I’d describe the artwork as solid, but not spectacular. The backgrounds are rendered well and appear consistent for the time of day and what’s depicted in the writing. The sprites are good, and remind me of the sprites from Sepia Tears. They serve their purpose in the game well and are pleasant to look at. I liked the addition of Yama checking out his phone every so often – it lends a touch of realism to the game. The CG art… is just okay. The CG shots really seem more like enlarged versions of the sprites. Usually the CG is where you go all out and try to make the impressive art of the game. While the CG art isn’t bad, it’s not spectacular, either. It didn’t wow me like I’d hope CG scenes would. 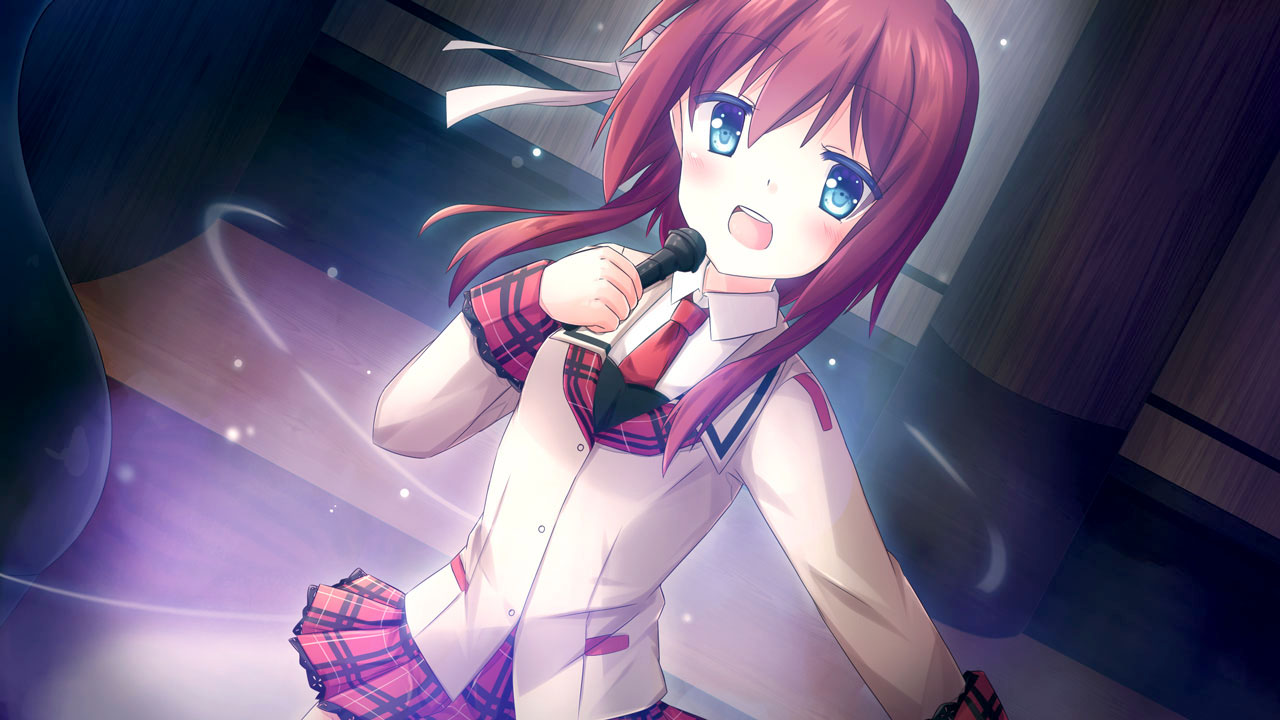 Just okay? ARE YOU NOT ENTERTAINED?

The music of Lucid 9 is something you’re either going to love or turn off immediately. A lot of it reminded me of those Pure Moods compilation albums they sold back in the day when people still bought CDs from TV ads. For those not in the know, it was a lot of New Age-type piano and electronic pieces. If you’re into that sort of music, then you’ll love listening to Lucid 9. Considering I bought both Pure Moods and Pure Moods II, you can deduce that I liked the music of Lucid 9 a lot. Not just because I like the type, but because the team did a good job of matching up the music to the mood of the scenes its played in. Yes, package it up as Pure Moods 2016 and slap it in a commercial and I’d probably buy it. Most importantly, the coding of the game is well done. It includes all of the baseline functions of a visual novel such as right-clicking for the text log, high-speed skipping for parts already read, etc. There is a gallery and track list, which are essentials for visual novels. As I was going from a pre-release copy, there are some awkward sentence structures and spelling, but nothing that will break your enjoyment of the game. As this is still a work in progress, I’d imagine that they’ll patch that out in future releases. Speaking of which, Fallen Snow Studios has stated they intend to have this story fully-voiced, but not to expect that patch until 2017. I’m not certain if that’s when to expect part two to the story as well, but it seems plausible. Lucid 9 is a very solid effort as an initial entry, and is well worth the cost of admission, that being of free of charge. Yeah, that’s a solid 6 hours or so of visual novel that’s actually done well, costing you nothing but the arthritis you’re building clicking the mouse to download it and the electricity going into your computer. If you paid actual money for some of the terrible effort poured into the OELVN market, you can certainly click this freebie, right?

Pre-release copy given to review team by the publisher.

+ Value-wise, it's free and would be worth paying for.

+ Since you asked, I'm a sucker for Elizabeth.

- At times the story bogs down some, which can make sections a tad tedious.

- CG cutscenes are only good, not great.