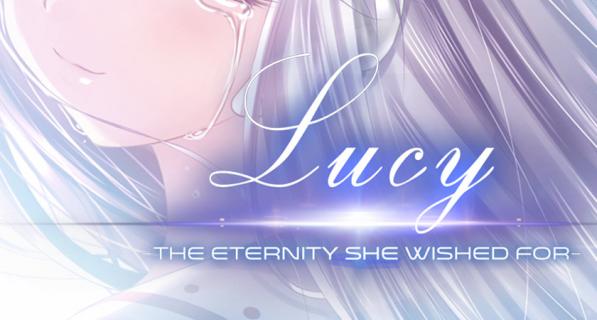 Probably due to the surprising amount of stretch goals reached and a few technical problems in remaking a 2010 visual novel, Lucy ~The Eternity She Wished For~ took a year to be released after it was Kickstarted. I was a backer myself, so I was worried. I thought it would enter some kind of development hell, which would be strange for a title that already exists, but in the end the game was released in three languages – Korean, English and Japanese – and with two voiceovers – Korean and Japanese.

Robot stories are, more often than not, made to talk about humans, not robots. Ever since Pygmalion and Galatea, we’ve all been talking about what it means to form human relationships with human-like stuff. Every time an android comes into play we are invited to ask ourselves where the limits of humanness are, what’s our essence as living beings – these kinds of things. It’s in Blade Runner, in I, Robot, in planetarian and now in Lucy.

So you’re an unnamed protagonist who hates robots but saves one when he comes across an abandoned female-looking android in a junkyard. You take her to a specialist who restores her functions and from then on she calls you 주인님 (Master) for the rest of the game, despite asking you for a name in a mildly fourth-wall-breaking scene.  And no, nothing special happens if you type in “Master” or “주인님”.

The main conflict in the game for you revolves around dealing with your newfound robot servant while also coping with a neglectful father who hates robots even more than Mr. Protagonist. The game will then ask you repeatedly how much of a companion you think Lucy is.

And this is it. I can’t really tell you more than this, otherwise I’ll spoil it. I could talk about how pretty the game is overall and how nice the music is to listen to – and all this is certainly true – but it’d be a distraction from Lucy’s main strength: how it uses the visual novel format to tell a story. It’s hard to find a visual novel that explores what it’s made of – its interface, choices, story, and assets – to play with you, to fool you, to make you take a wrong step. But I have to tell you – trust your guts with this one, otherwise it’ll be hard to appreciate how Lucy uses the very act of choosing as a storytelling mechanic and the very act of hearing a story as gameplay mechanic.

Lucy, as a character, is vibrant, friendly, and stubborn – it’s not as if she’s trying to deceive you into thinking she’s human, since her repetitive speech patterns and refusal to go against or think ill of any human give her away. The game will also reinforce her artificiality with sound effects and some empty-gazed expressions, but everything else about her behavior is erratic and whimsical enough to be considered human. In this regard, she’s actually less of a cognitive challenge than Yumemi from planetarian, Chii from Chobits, or Aigis from Persona in that it’s very hard not to consider her as a human, or at least to connect with her as if she were. It feels like a girl pretending to be a robot than the other way around. It may look forced, but it doesn’t detract from the story’s impact at all since this is not where Lucy will try to trick you into crying. 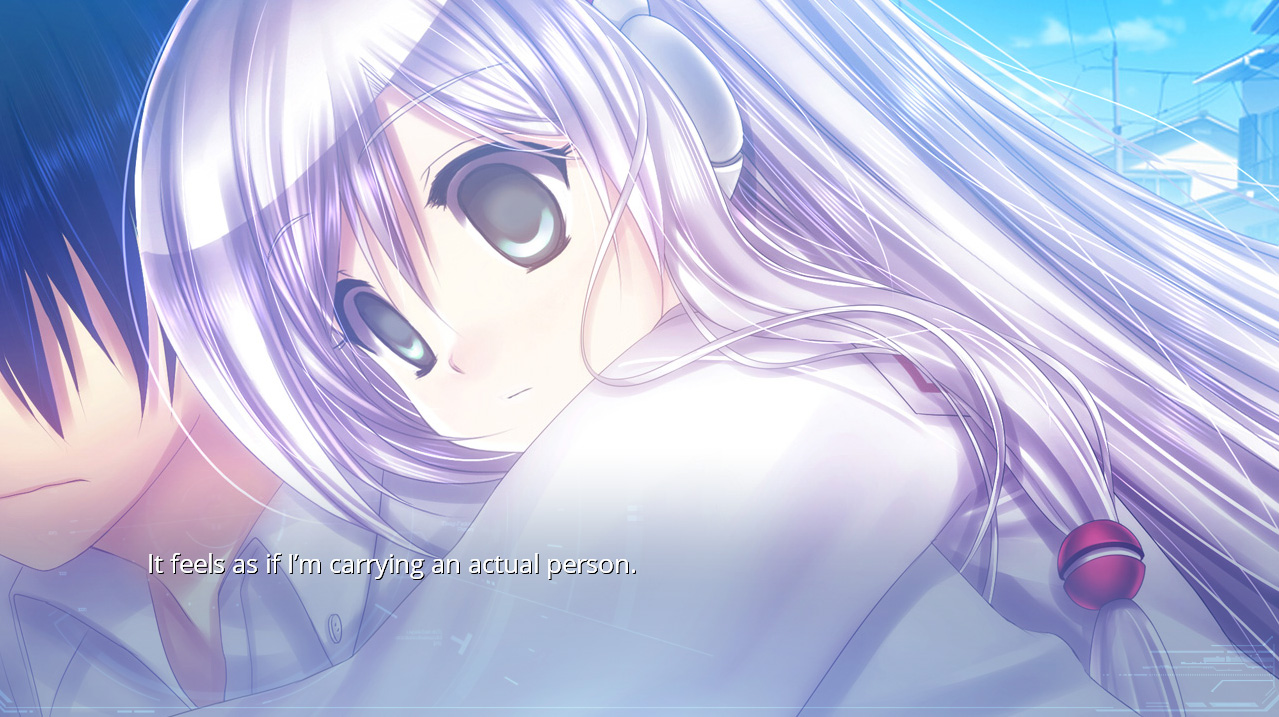 As you try to find out about Lucy’s past, you’re introduced to interlude scenes with the Doctor who created Lucy, telling you about what happened before she was thrown away. They present the world’s main conflict – the dangers of allowing Lucy and other near-perfect imitations of human nature to exist. Eventually, everyone in the laboratory was forced to abandon her and discontinue the project. By then, she had already learned how to feel lonely, so it was very hard on her. Her attachment to you probably derives from the trauma of being forgotten for God knows how long, so even if you’re the kind who hates robots and thinks they can never become truly alive, the game will emotionally blackmail you into at least accepting her as a servant.

But I’m not sure anyone can get off this ride unscathed. Lucy is ten times more powerful for those who have played lots of visual novels and think they’ve seen it all, but it sure as hell is enjoyable for everyone, especially considering how short and concentrated the experience is – it has only one well-aimed bullet and I doubt you can dodge it. 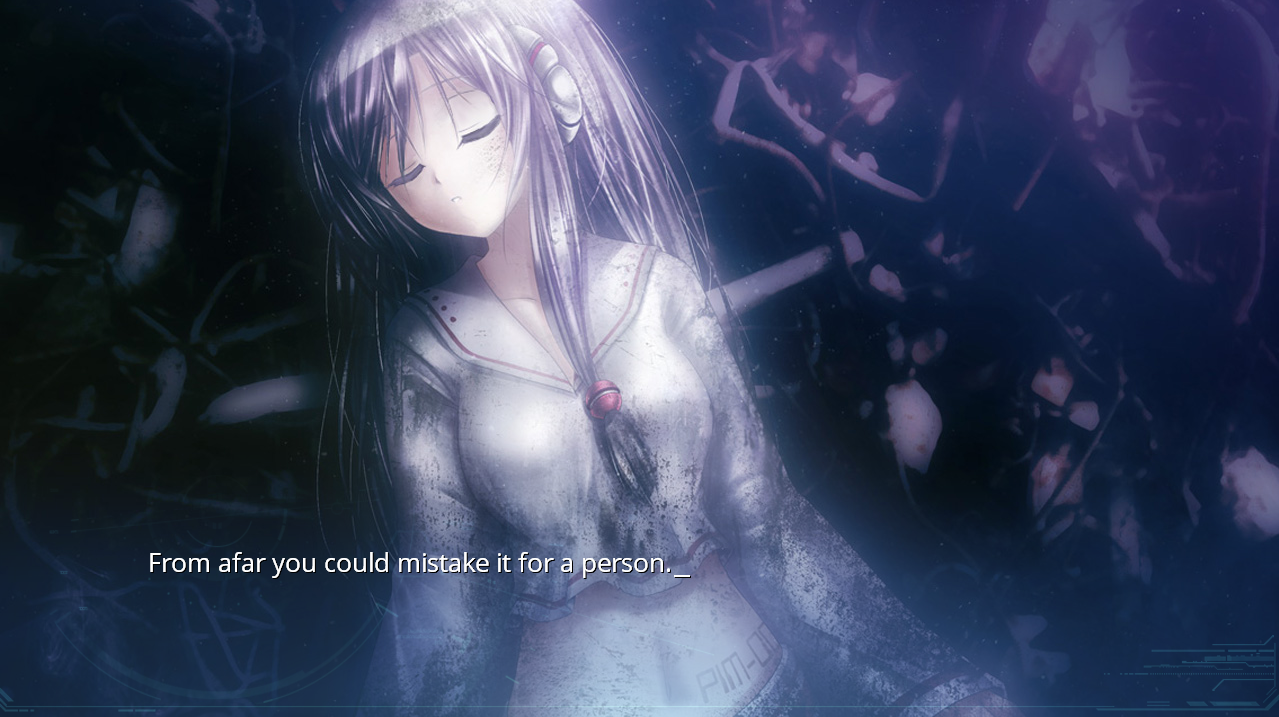 + Great storytelling that uses the VN format in its favor

+ Concise, straight to the point

- Perhaps Lucy is a little too charismatic?

- Music may get repetitive