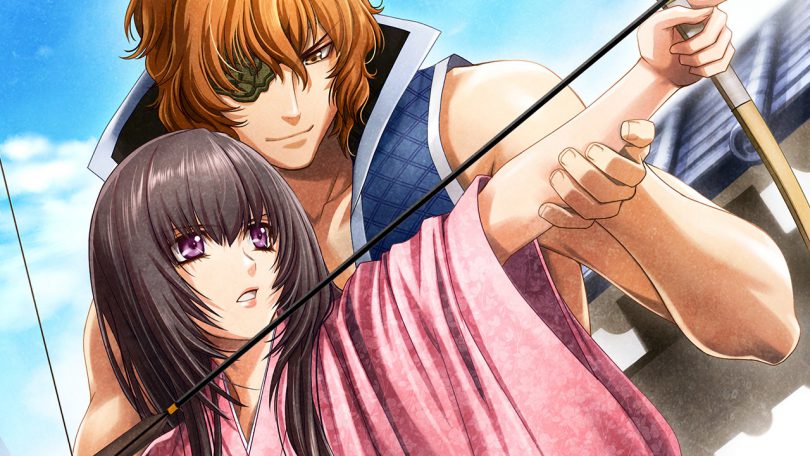 Destiny’s Princess, or Sengoku Himeka, is an otome game made by Dogenzaka Lab, first released for Android and iOS last year and now ported to PC through Steam a little less than two weeks ago. It puts you in the shoes of a princess of a country ravaged by demons, who summons five heroes from the Sengoku period to fight for the sake of her province. Without beating around the bush, the game may be called “A War Story, A Love Story” but it’s definitely much more of a love story. And how good is it at that? Well, I wouldn’t want to spoil the rest of the review, but as it turns out, it’s pretty good.

The first thing I need to get out of the way is related to the game’s writing. Destiny’s Princess is a dual-release, and those have a reputation for having atrocious English, for better or worse… Thankfully, this isn’t a problem you’ll run into here. The game is very well-written, and while it has its odd phrases here and there, it’s written much better than most fan translations out there, which is a definite plus. The game having good prose is even more important than it usually is, because Destiny’s Princess relies a lot on its atmosphere to create its appeal. 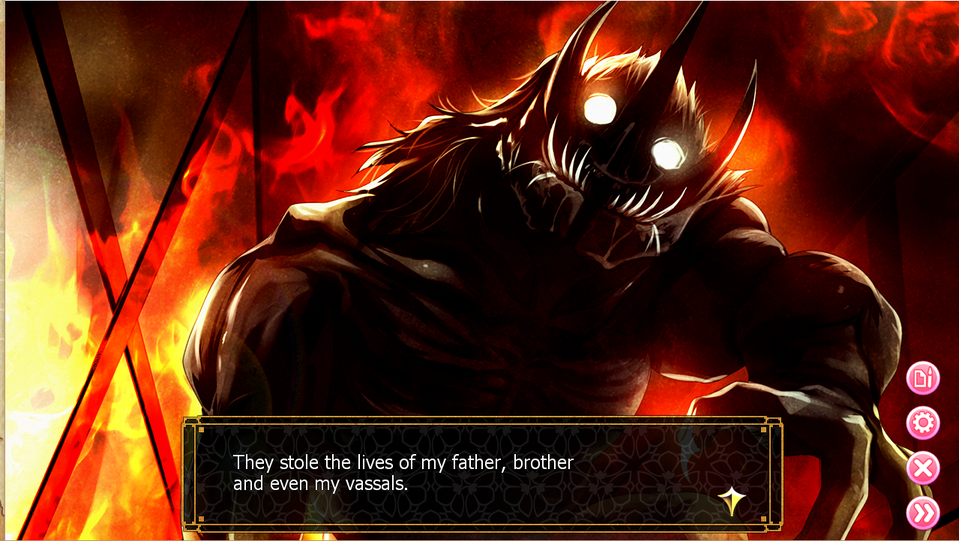 The first thing you’ll be confronted with is the game’s art, and that leaves a very good impression. It has well-designed characters with beautiful sprites and solid background art. This, coupled with the good prose and well-used soundtrack makes for a very nice experience right off the bat. The game’s UI and choice system are actually fairly noteworthy – the game has a vast amount of choices, but unlike most VNs, after a short prologue, you’re able to manually choose the route you want to do with no complications. This was actually a very smart move on the developers part, because then the choices can be used for other things, like developing your character.

You, the nameable protagonist, are probably the most well-developed self-insert character I’ve seen, because the large amount of choices are meant to elaborate your thoughts, and not swoon your chosen guy.  This helps the game immensely, since they were able to actually put you in the princess’ position without making her a shallow character, which makes the romance that much more enjoyable. Otoge or not, all VN developers  could take a few lessons from how this game was done when making their bland high school protagonists. 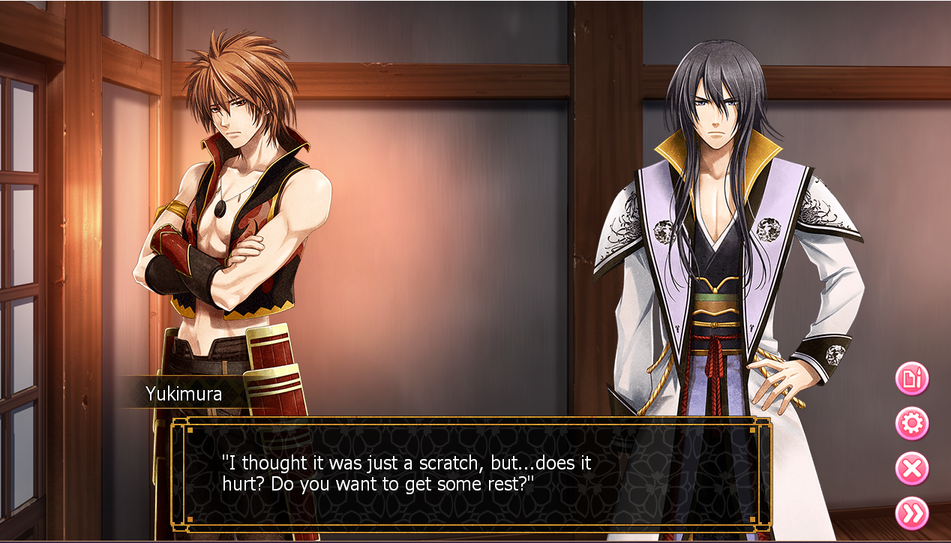 If they really wanted to, I have no doubts Dogenzaka Lab would be able to make a very good war story… But again, that’s not what Sengoku Himeka is about. This leads us into the bad part of the game. The main problem Destiny’s Princess has is that it was done with such an overwhelming romance focus that, in most routes, the plot feels all over the place. There are several scenes creating conflict and romantic tension between you and the heroes, and those are in a good volume and are generally well done, but several plot points feel like an after-thought that don’t have the amount of focus they needed to have to be impactful… The routes are all about about two hours long, and it really feels like most of them could have used an extra half an hour of story or so of extra time to make the game more polished. Ultimately, Japanese history otaku can take some pleasure just from seeing how they interpreted the characters pulled from the Sengoku period (as well as the general setting and atmosphere), but most people would probably find it lacking, since some plot points were executed very poorly due to the limited amount of time spent on them. 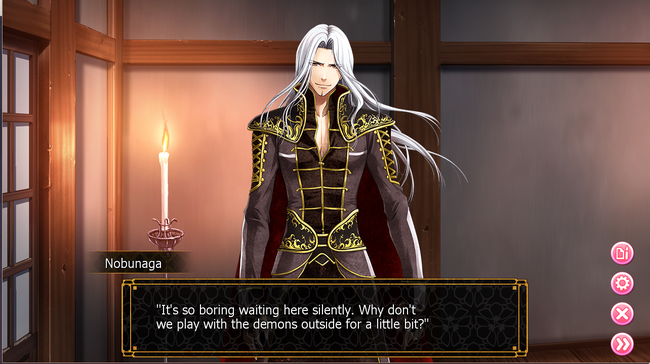 As the main aspect of this game is clearly its romance, let’s get to the heroes. There are 5 routes in the game – Most of them fall into what I said above, but two routes were big exceptions to that – One belonging to Yukimura Sanada (in our world, the second son of Masayuki Sanada, the head of his clan, which became a vassal of the Takeda family.) His was the first route I played, pretty much just because his embarrassed face is ridiculously cute. Yukimura’s route is able to get you laughing easily, with a lot of scenes being comedy-driven teasing with the two of you endlessly bickering. The comedy being pretty solid made that route better than the others, because it actually helped a lot with his characterization and to better identify with the situations the princess went through. By itself, it feels better than the rest of them, and as such, I think it’s a great way to start off the game.

The other noteworthy route to me was Nobunaga’s, for completely different reasons. Nobunaga’s route is unsettling, partly because he’s a very forceful man. The designers had the great insight to make him take the role of your father, which made his route that much more conflicting through and through. It’s a dark route where characters seem to take self-destructive choices, and it’s a route that will explain the deeper truths of the VN, making it a very fitting finale. People who do like plot-driven stories will significantly prefer this route over the other ones, and not just because of the intentionally unsettling setting (that gets very rapey at times.) In our world, Nobunaga was a great daimyo who almost conquered Japan, and I was surprised at how well this translated to his character.  Unlike the other heroes, he feels majestic and brutal, and his route was a truly enjoyable experience that felt like a different game altogether, with a big spike in quality. Nobunaga’s route will explain all of the mysteries left in the VN, leaving nothing unanswered – because of the nature of your relationship, Nobunaga’s route also molds your character a lot more than the other routes do, and I can only praise the developers of the game for putting together such a great route.

People who are only in it for the romance, can’t stand darker paths, and don’t feel the need to have all of the game’s mysteries solved should probably consider staying away from it, however, as it’s a lot more aggravating than anything else in the game. So, should you play Destiny’s Princess? Probably. If you’re not into otoge the game will have little appeal to you, but if you are, it’s a pretty good game that stands above average in quality. You can purchase Destiny’s Princess here! A review key was provided by the publisher.

+ Very good artwork and music, which help in creating a great atmosphere for the game

+ Good prose and pacing, which is very remarkable when it comes to VNs.