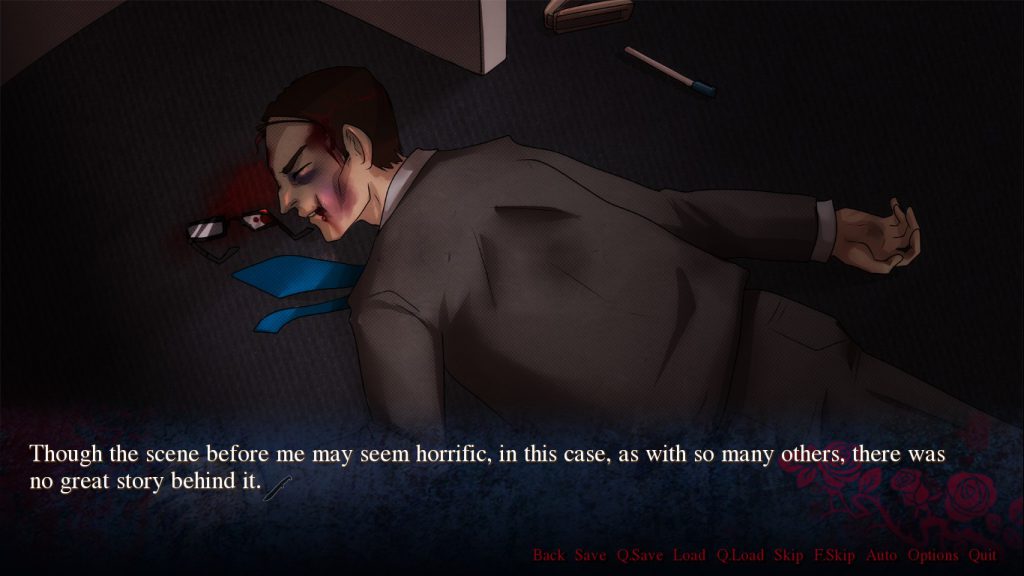 Now this is a powerful start, right? Strong, graphic, right to the point, yet casually dismissive. Makes you want to know what the story is behind the corpse right before your eyes. Was it murder? Was it suicide? What’s behind this death?

Yeah, this is not how Sickness starts.

Well, this is the first scene, but you’re briefed by a monologue about the nature of murder and economical injustice. You already know what Unwonted Studio’s game will be about: a universe in which human life has little value, murder is a valid artifice, and getting by in an unfair world is most people’s main objective. Especially in our protagonist’s case: after his parents died in a suspicious accident, he had to drop school so he could provide for his twin sister Sara, as the judicial system wouldn’t let them inherit their parents’ money and house until investigations were complete.

So our very own protagonist is the murderer; and the murderee is his boss, who denied the money Suoh needed. It was an accident of sorts – Suoh blacked out during a physical exchange between them and found the corpse upon waking up. He finds out he can’t feel guilty about it, though, and we are then introduced to The Sickness – a feeling, a force inside Suoh that makes him lose control and commit extreme acts of violence. As Suoh worries over how he is supposed to get money from then on, he is surprised by Markus, a co-worker with connections tothe city of Richmond’s parallel power. Markus offers Suoh a job as a collector beside him and from that point on, the amount of violence in his life escalates quickly as he is hired by one of the city’s most powerful mobsters to kill his enemies.

And he likes it. 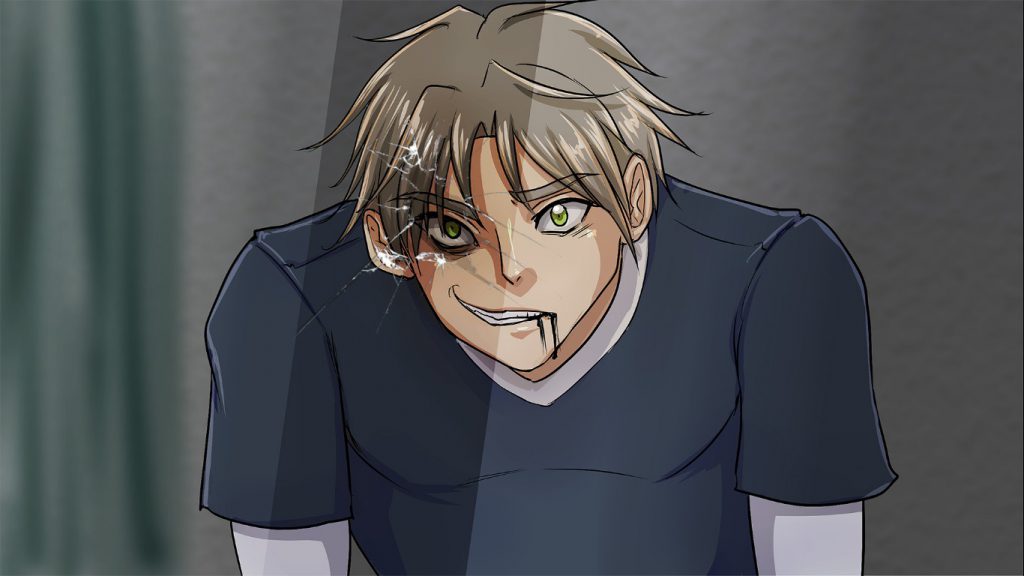 From this perspective, you’d think Sickness is a gritty tale about cruelty, full of edge and angst and perhaps a discourse about economical injustice. But this isn’t the case. As a matter of fact, the game never gets its hand really dirty: it tries its best to somehow justify Suoh’s acts of violence and he seldom loses control or gives in to bloodlust. It is very hard to hate or even feel conflicted about Suoh right off the bat – there are some instances in which the game will try to make him ruthless, but these situations never come back to bite him – or you, for that matter.

Normally, the game will portray murder as either something Suoh needed to do to make ends meet for Sara or as a viable option in face of a morally more condemnable crime, namely rape. That is, there will often be a setup in which extreme violence is a byproduct of the situation itself, not of cruelty and cold blood. Thus, the aspects of Suoh’s dilemmas as a human are rarely thrown in the equation.

In fact, Sickness revolves around two relationships (and thus, two routes) – Suoh and his sister; and Suoh and Misa, one of his criminal co-workers who has always been trained to kill under her father Sai, who happens to be the chief assassin in the organization. 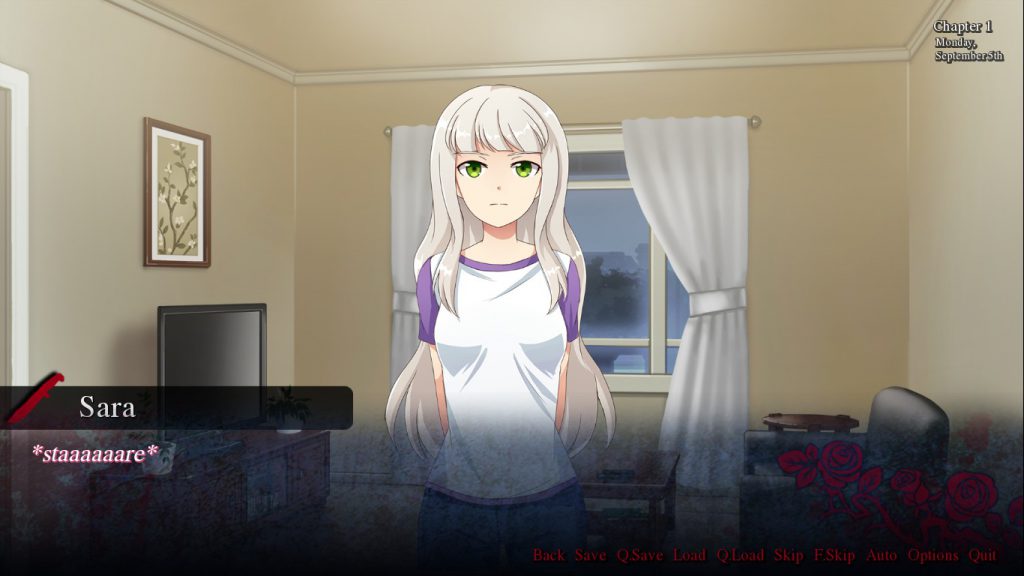 As such, the truth is that the moral game and intrigue feel watered down in favor of an endearing look into the sibling dynamics between Suoh and Sara, and Misa discovering a world unrelated to cutting throats. This is where it feels like Sickness attempted to tell you two stories at once: it tries to tell you Suoh’s current life is horrible and he has to get away from it as soon as possible to ensure Sara and himself have a normal life, but life with his sister is actually portrayed as pretty comfortable, as something you’d want to protect, not something you’d want to get rid of. Likewise, the game will shift the focus from the protagonist’s “sickness” to Misa’s difficulties with Western cutlery whenever it can.

And that is not a bad thing. As a matter of fact, Sickness is at its best when it’s adorable and at its worst when it’s somber. The loose ends in the “dark side” of the story make it feel like nothing ever pays off even if it does leave you on the edge sometimes, whereas the “bright side” has the feeling of a proper (if somewhat bland) story being told.

Both the ever-present knife and rose motto and the HUD’s color palette end up feeling out of place since Suoh’s actual mental instability and desire to kill end up being secondary. The backgrounds and sprites don’t help, either – the text will try to describe the city as a shithole for anyone who isn’t filthy rich, but what we see are clean streets, new buildings and a normal city life; the text will try to describe their house as dysfunctional, cluttered, and a mess all around, but what we see is a pretty big and cozy house for two siblings to live in.

If you want to talk about something as delicate as morals, the value of human life, and deranged people, you have to go neck-deep in the themes. Sickness doesn’t and, because of that, feels shallow. There is a cute story behind all the unpolished attempts at making you feel morally challenged, but at the end of the day it’s as if the game was trying to tell you something, but gave up.

Get Sickness on Steam!

The review copy was provided by Unwonted Studios

- Barely touches the surface of what it tries to do