Among our niche community exists an exalted list of god-tier untranslated visual novels. The list is populated by VNs that have been in demand for years, with all English readers hoping that someday they, too, will get a chance read these supposed masterpieces. Contained within are the likes of Dies irae, Baldr Sky, and many other fantasy and sci-fi action titles. But there’s a problem with this list, and a pretty big one at that. It didn’t contain Tokyo Babel. Propeller, Tokyo Babel’s developer, created at least two such games that frequently appear on that list, Kitto, Sumiwataru Asairo Yori mo, and Evolimit. Yet Tokyo Babel, for whatever reason, has evaded the public consciousness right up until its release. What I discovered upon reading the VN was not some second-rate knock-off, but an adrenaline-pumping, dramatic, and at times hilarious biblical action story that more than deserves to stand shoulder to shoulder with the giants of the VN world. 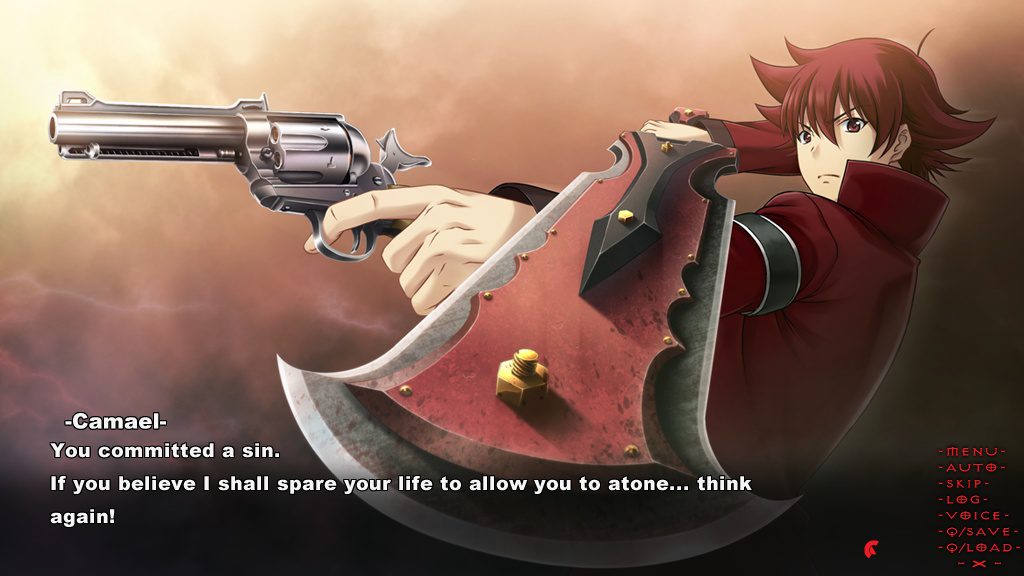 Camael is kind of a badass.

Things are bad in the universe of Tokyo Babel. Real bad. Across the “multiverse,” all of the various parallel worlds are suddenly dying off one by one, either through man-made or natural disaster. Unfortunately, the realm of the afterlife isn’t any better off. The gates of Heaven are sealed with many an angel exiled and unable to return, and Hell has literally flooded over. The remaining angels and demons have no choice but to form an uneasy alliance. Purgatory has been reclaimed and transformed into “Tokyo Babel,” and the survivors have been given a mission from God: Humanity is to undergo a pilgrimage, ascend Tokyo Babel, open the gates of Heaven, and beg for the Lord’s forgiveness. Unfortunately, it’s never that simple. The journey is fraught with obstacles and no one has ever made it more than halfway there and lived to tell the tale. It’s not long before doubt starts creeping in, is this really the path towards salvation? And the political situation within Pandora, the core of Tokyo Babel where all of its inhabitants reside, is a veritable powder keg teetering on the brink of detonation. While the initial premise of Tokyo Babel sounds straightforward, in practice it is anything but. The lore of Tokyo Babel runs deep. Propeller has done a great job at worldbuilding, creating a huge cast of characters, each with their own interesting backstory and relationships. The personalities for each and every character in the cast are well-developed and fun to explore. Even the many side characters are given ample screen time and character development. The three main heroines, Raziel, Sorami, and Lilith, are just as well written and it’s hard not to fall in love with their eccentric personalities and to become invested in their personal struggles. And the protagonist, Setsuna, is just as strong of a character as any of the others. Unlike most VNs, he is actually the most important character of the story, and although he’s sort of a weak presence in the opening chapters, he quickly grows and changes as a person, and he certainly doesn’t make things boring.

Is there any place better for a romantic date than atop the primordial serpent of chaos? No.

The characters overall are just a joy to watch, and one of Tokyo Babel‘s finest strengths is surprisingly the slice of life and comedy scenes. The characters’ personalities are pretty eccentric, and they make for some endlessly entertaining character interactions. I’m not kidding when I say that Tokyo Babel is one of the funniest VNs I have ever read. I was finding myself laughing out loud multiple times to almost every comedic scene. The fantastic voice acting played no small part in this. The all-ages nature of the VN allowed them to go for some pretty big-name voice actors and actresses, and it definitely paid off. It is actually rather unbelievable that a VN focusing primarily on action can have better comedy and slice of life than 99% of the VNs that focus solely on that. These comedy scenes are peppered throughout the three routes, but before the halfway point in each one they disappear almost entirely. I can’t help but wish there were more. And that is symptomatic of a bigger problem with the VN; the balance of action, drama, and comedy just feels uneven and the pacing suffers as a result. The common route is tragically short, lasting little more than a couple of hours. Before it feels like you’re able to fully get to know all of the major players, you already have heroines blushing over your every word and your journey is already starting in earnest. And indeed, the romance does suffer a bit as a result, the relationships aren’t given enough time to properly evolve. It all just feels so sudden. I want to linger more in Pandora, get to know the characters more, but Tokyo Babel was all too eager to boot me out and start the story “for real.” And boy, does it ever get real. The action in Tokyo Babel is superb, to put it simply. The creativity exhibited in the action scenes is unparalleled among English VNs, and their pacing and writing is top-tier. Nearly every scene had me on the edge of my seat, and there are a LOT of action scenes. I would say that nearly half of this game is either action, or is setting up the action in some way, so it’s a good thing they nailed it so perfectly. The scenes are full of tension and are highly unpredictable. The writing is highly detailed where it counts, while glossing over the aspects that don’t matter so much. And once you get deeper into the routes and the stakes rise, the battles become just so goddamn cool. 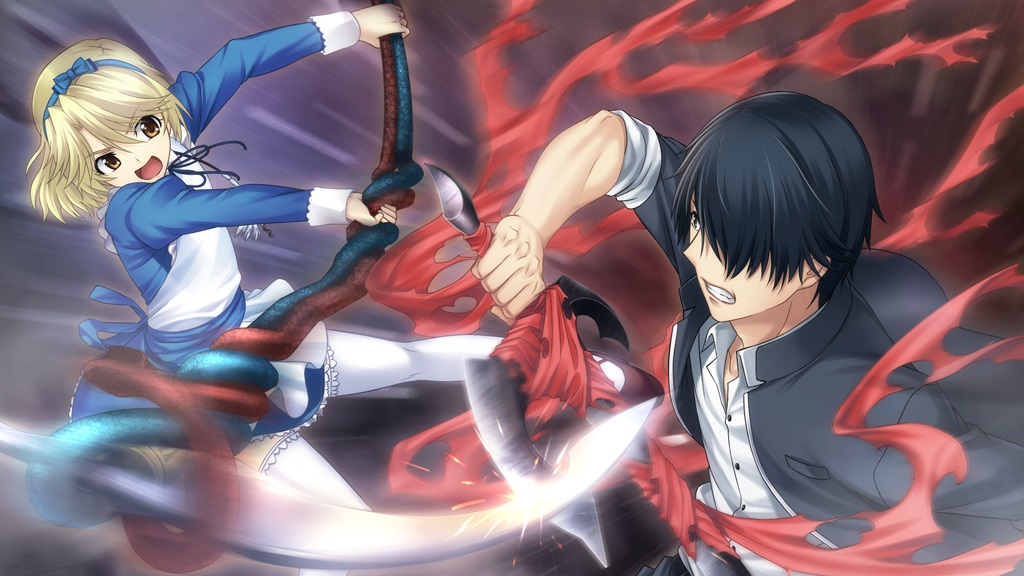 But the battles aren’t just about action, they’re clashes of ideals and personalities. Each character in Tokyo Babel has a raison d’etre, or a reason for living. These raison d’etres are their source of power, the strength that drives them in their battles. This isn’t just another weird way to have shounen-style superpowers, this aspect allows them to creatively and seamlessly integrate character development into the action itself. When Setsuna defeats an enemy, he grows as a person, with the defeated foes seemingly coming to revelations of their own. It’s this integration of storytelling and action that allows them to pile on the combat sequences one after the other by the end of each route. And while for the most part the action is inspired and the battles are creatively orchestrated, this unfortunately isn’t consistent throughout the entire work. Specifically, the Sorami route suffers from a distinct lack of creativity. It sort of felt like they had just two routes’ worth of content to stretch out over three, and Sorami’s route was the sacrificial lamb. It still had some pretty cool fights, specifically the climactic ones at the end, and the ending itself was satisfying, but the journey there felt laborious at times. Several of the fights felt like retreads of fights from the Raziel route, and while they were usually approached from different angles they still felt half-assed in a way. The strong points of the game are still good enough to keep you going through that route, so while it feels like a slog at certain times, it’s still an overall satisfying experience. I will strongly recommend however that you play Raziel’s route first. Not just because it’s better, but it also touches on crucial aspects of Setsuna’s backstory that are practically glossed over in Sorami’s route. It felt like it was designed to be played first, so it’s actually kind of bizarre that they even allow you to play Sorami’s route first. The action scenes are complemented by the excellent and abundant art. The sheer number of CGs is actually staggering, almost every combat scene has at least one unique CG, and many have multiple. It gives a really dynamic and exciting feel to the combat. The art itself is great and well-detailed, with the weapon design being especially great. The music is also pretty good, giving each fight just the right level of tension. 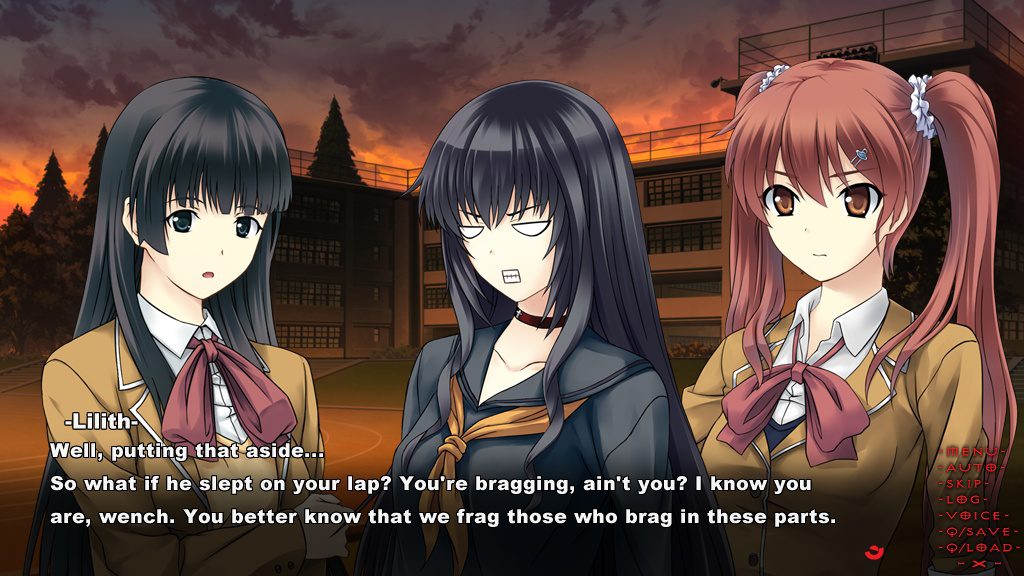 MangaGamer’s release features an excellent translation by Garejei and fellow Fuwanovel member Conjueror. It tends to err towards the liberal side of the translation spectrum, which grants it some of the most natural-sounding dialogue I’ve seen in a VN translation. The comedy felt like it came through especially well, while the action scenes possessed a good amount of flair. Unfortunately, the other aspects of MangaGamer’s release aren’t so great. It feels pretty sloppy from a technical standpoint. I had trouble getting the voice replay button to work from the main game screen, for example, and often had to use the backlog to repeat voices. The performance was also oddly enough pretty poor. Whenever special effects of any sort were being displayed, no matter how mundane seeming they were, the text rendering became choppy to a rather distracting degree. There were also several other text-related bugs I encountered, the worst being some unreadable text during the climactic moment of the final, true route. It seems not everyone had these issues, however, so I can’t attest to how prevalent they are. Regardless, they did not hamper my overall enjoyment of the title by much. Tokyo Babel is an imperfect VN to be sure, but its lows never end up falling all that low and its highs reach higher than almost anything else I’ve read. It has easily made its way onto the list of my favorite VNs, and is definitely the best action-oriented VN I’ve read. If you’re one of the many who have been longing for those aforementioned fabled giants of the action VN world, Tokyo Babel will almost certainly be just what you were looking for, even if you didn’t know it until now. Buy it, read it, and show your love of it to the world if you want more VNs of its ilk to ever be translated.

+ Thrilling action that will genuinely keep you on the edge of your seat.

+ A large, strong cast of characters with a myriad of motivations and personalities.

+ Drama and intrigue that extend across multiple routes, culminating in a highly satisfying true route and ending.

- Uneven pacing can sometimes make the story feel a little rushed at first.

- Sorami's route feels uninspired, the amount of rehashed content prevents it from being as great as the others.

- A few technical issues hampered my enjoyment to a pretty minor degree.