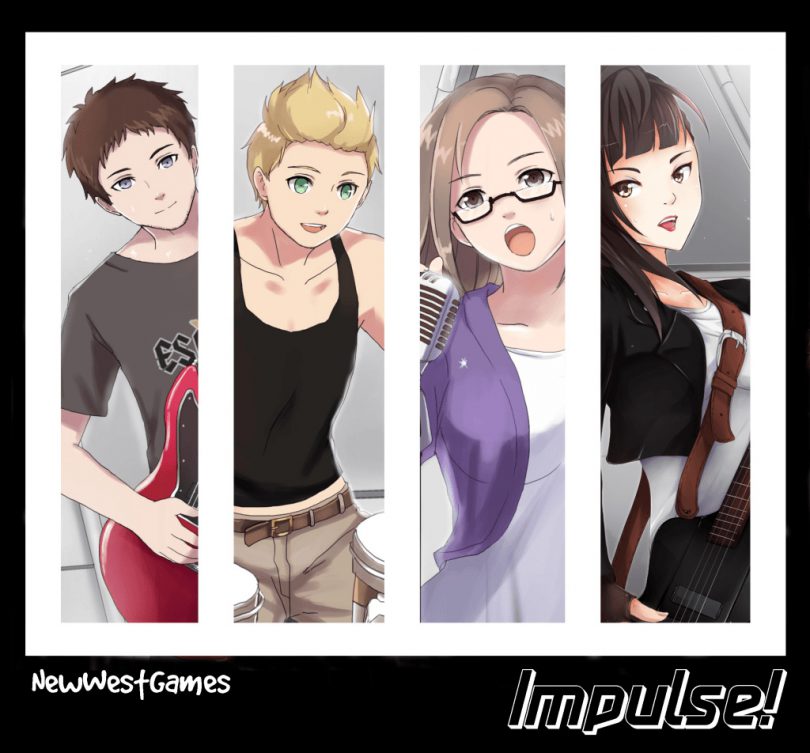 OELVN. A term that tends to make your average weeb cringe. It means the game didn’t originate in the beloved motherland of Japan. In terms of putting together decent visual novels, it’s true that the west has a ways to go in catching up. And fortunately, there are those that are trying. Which brings us to the topic of this review – Impulse! This OELVN is the second work from New West Games, which is actually just one guy in British Columbia (that’s in Canada and not the province that speaks French) named Kieran Browner. The game was successfully greenlit on Steam in October 2015 and released this month. Impulse! follows the story of Chris… uhm… yeah, just Chris (it rhymes with Protagonist… ProtagoChris!) and his band, aptly named Impulse!, as they try to make a name for themselves in the cutthroat world of the Seattle music scene. You can take that cutthroat part literally, because the game turns from slice-of-life to slice-of-murder mystery at the band’s first show, where the act they open for turns up dead after the show. None of my business, right? Well, the dead artist is ProtagoChris’ ex-girlfriend, which spurs the group on to try and figure things out for themselves, as the police department of Seattle is too busy to assign anyone but Robert… just Robert… to the case of some dead college student. As the story progresses, it adds more music and more murder until the shocking conclusion. And I mean shocking because the ending really seems like it was done on impulse… but enough of the not-quite spoilers. 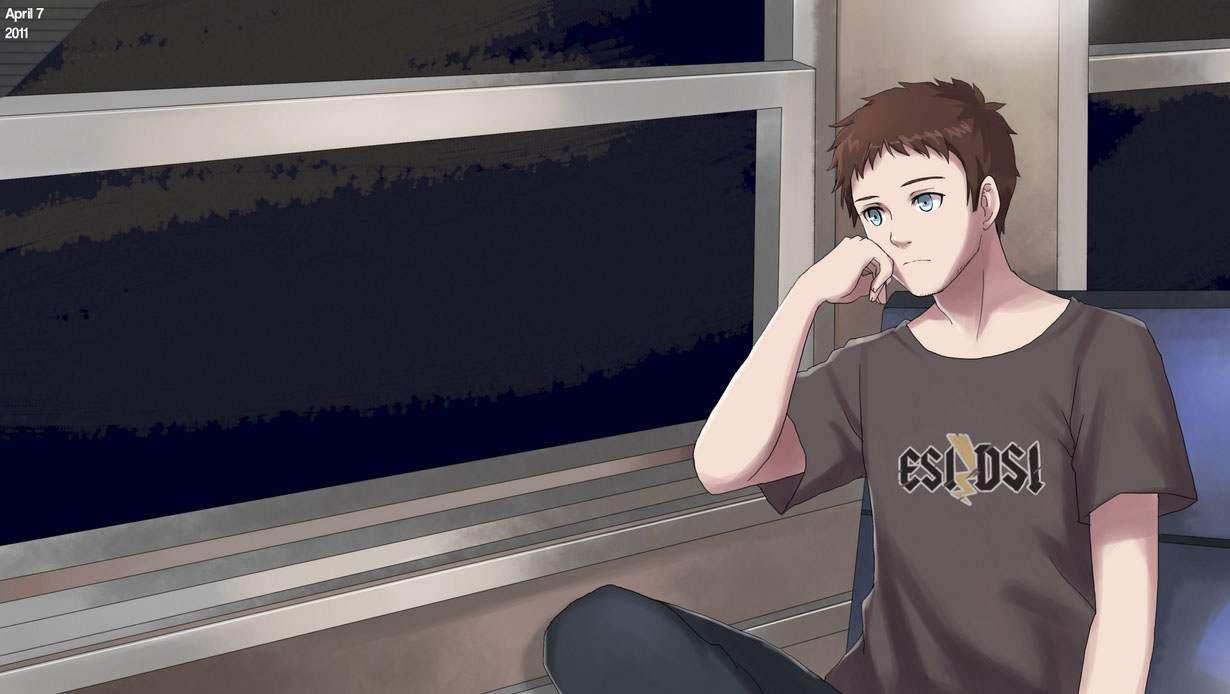 There are two things NWG really tries to sell you on this game – its interactive parts, and its 2.5 hours of voiced dialogue. To that extent, Impulse! is a very ambitious project. Regarding the interactive part, the game tries to incorporate other types of game modes into it, the first being the “click and find” type – where you scroll your mouse through the scene and try and find all the evidence in a CSI-style game. While it does give you a bit of a breather from clicking on text, there’s really no way to get it wrong. The story won’t advance until you find everything, and there’s no time limit so you won’t get booted from the scene for being a meddling kid. So while there’s nothing particularly wrong with it, it’s not exactly spectacular, either. It also does bring up some wonderful plot hole questions along the lines of, “If there’s a bloody weapon on the scene, why hasn’t the Seattle PD bagged and tagged it?” That kind of goes beyond my suspension of disbelief, I’m afraid. Police may miss some things at a scene, but not the obvious. The second interactive part has promise, and could be expanded upon for future games. In it, you talk to your band members about the recent incidents, and they toss out their ideas and impressions, as you try and piece together the mystery. It’s an interesting concept, but again, you can’t get it wrong – you’ll eventually click on the right option. A stronger option would have been allowing the player to follow the wrong option and end up at a dead or bad end. It doesn’t feel as rewarding when you can’t be wrong. But it’s something to look for in future games, as I like the concept. 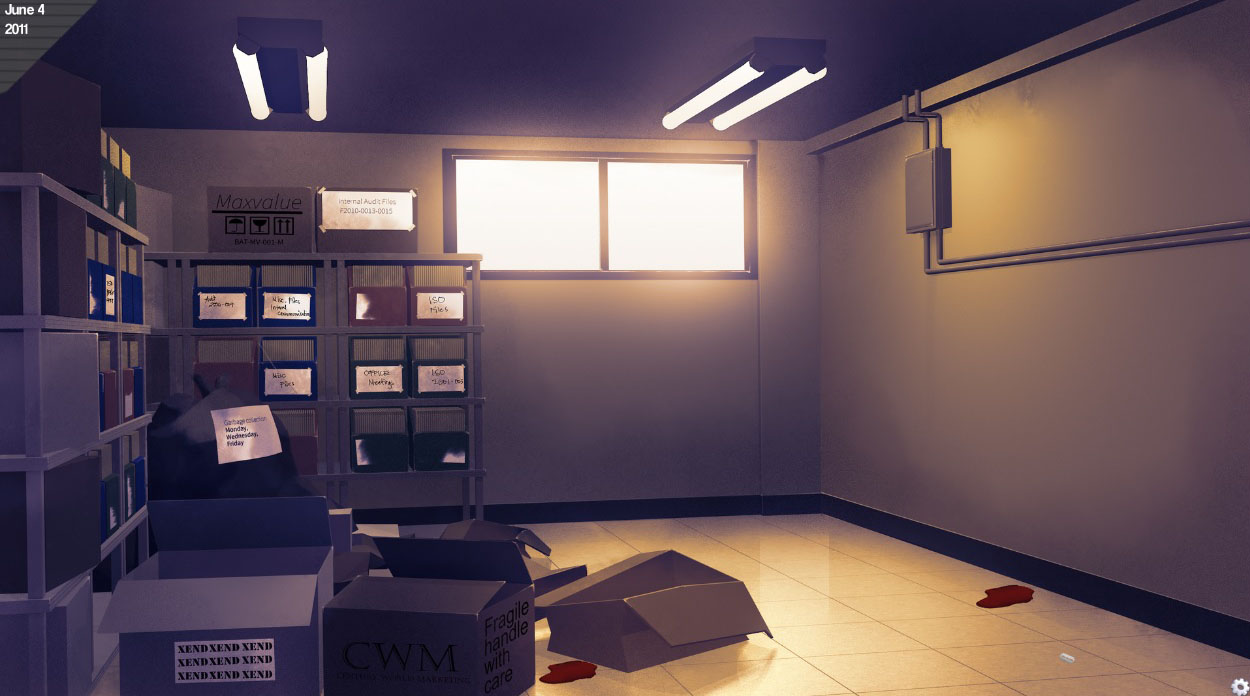 The final part is the few times you take the evidence you’ve found and go to the suspect you’ve pieced together with your bandmates. You question the suspect and show the evidence you have to back it up. In keeping with the theme, you can’t get it wrong. You can keep clicking pieces of evidence until you get the right one. Logic would say that the suspect in question would get tired of being accused with bad evidence and either leave or call a proper authority figure to get your band booted for harassment. You do get booted once… after you’ve gotten all of the correct clicks, so it doesn’t really count. Overall, the interactive additions are fun diversions, but they neither make nor break the game. The more interesting concept was the choice to have the entire game vocalized. This is a big gamble as voice acting is one of the toughest things to get right in anything. There’s a reason why so many cartoons use the same voice actors, after all. So was Impulse! successful in the attempt?

Not exactly. The effort was there and there are moments when you feel the actor or actress got the part right, but a lot of the time it doesn’t feel right – particularly in stressful situations, like finding a dead body. ProtagoChris comes up very flat in emotion when it comes to scenes like this, and since his is the voice you hear the most, he’s the one who needs to give the strongest performance of all. The voice behind Joe, uhm… just Joe… the lovable, goofy drummer would be the most consistent voice of all of the cast in my opinion. His Homer-esque (Simpson, not the Greek epic poet) love of beer is a pretty fun highlight of the voice acting. This doesn’t constitute a failure by any means – there’s a lot to build on for future releases and it’s not like the vocals were a total flop, but they were definitely inconsistent.

Speaking of sound, the game does suffer a little from “TV commercial to TV program drop off” as I like to call it, where the commercial is loud enough but then the volume drops when the show comes back on. There are times when the vocals or music come in quite clear, but then inexplicably drop to lower levels causing you to have to bump up the volume to hear, only to have to turn it back down again later.

Which brings us to the music. As this is a game based around a rock band you’d expect the music to play an important part. What I found funny in a “smile” kind of way was ProtagoChris wears a mock-AC/DC t-shirt, but the music doesn’t sound like AC/DC at all – it’s closer to power pop rock. When the band is playing the VN’s music switches to actual songs (no vocals though) and then the background music alternates between different synth-riffs. It’s a pleasant experience overall, despite the slight volume issues. Lest I forget that this is a visual novel, we come to the art. Most of it is your typical background art with sprites that change between several emotions. The nifty part was the sprites actually blinking, adding a touch of realism. CG cutscenes do appear at various times. Much like the voice acting, the art is a bit uneven. When it’s good, it’s really good, such as the repeating “band on stage” cutscene. 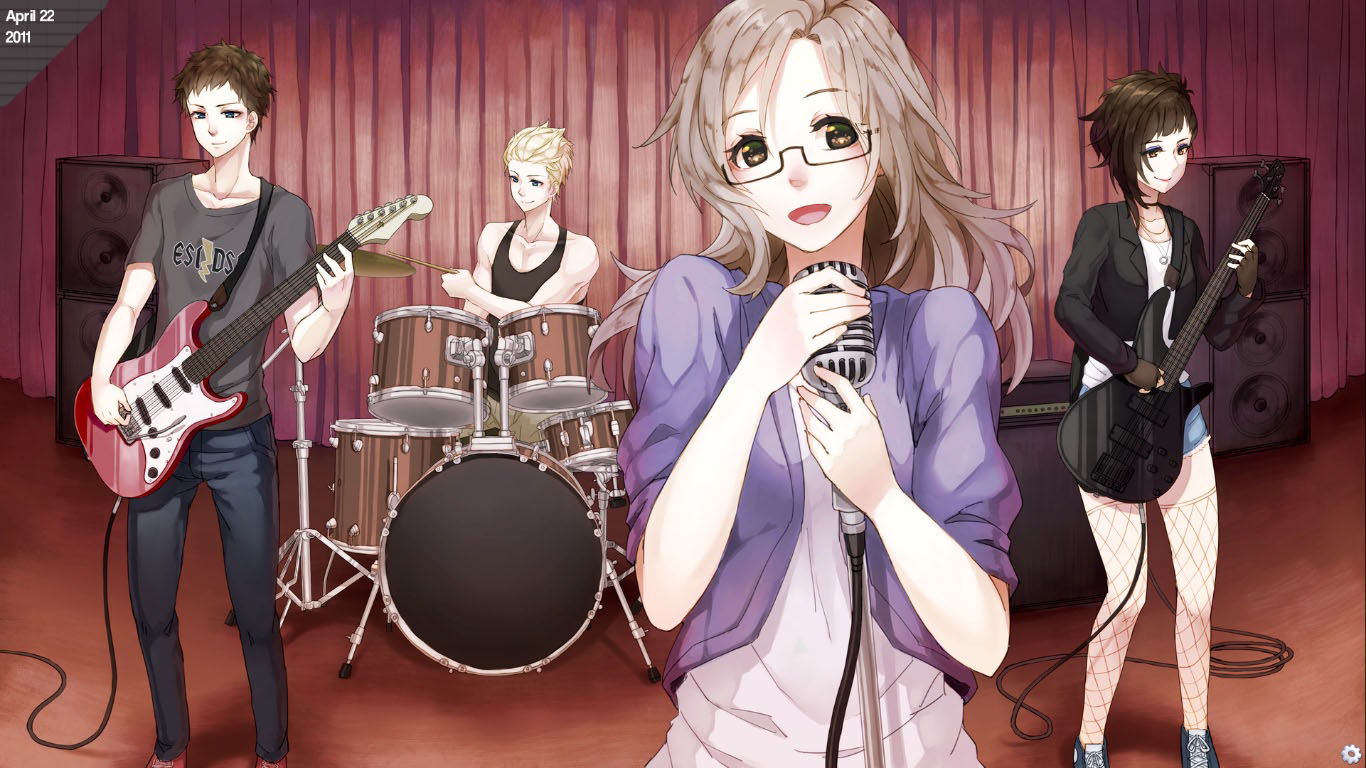 What we have here is an example of top-rate waifu art.

Even in its best example, it does have some inconsistency. Laura… just Laura… the lead singer is obviously given priority in the scene. In comparison, it makes the others look a tad flat. Joe, in particular, comes off looking a lot younger than he should in the cutscene CGs, especially when the game hits the beach. The beach, oh yeah, there’s a Kira☆Kira-style road trip included, complete with beach, bikinis, murder, music, and a van that looks like it was drawn by my 9-year old daughter: 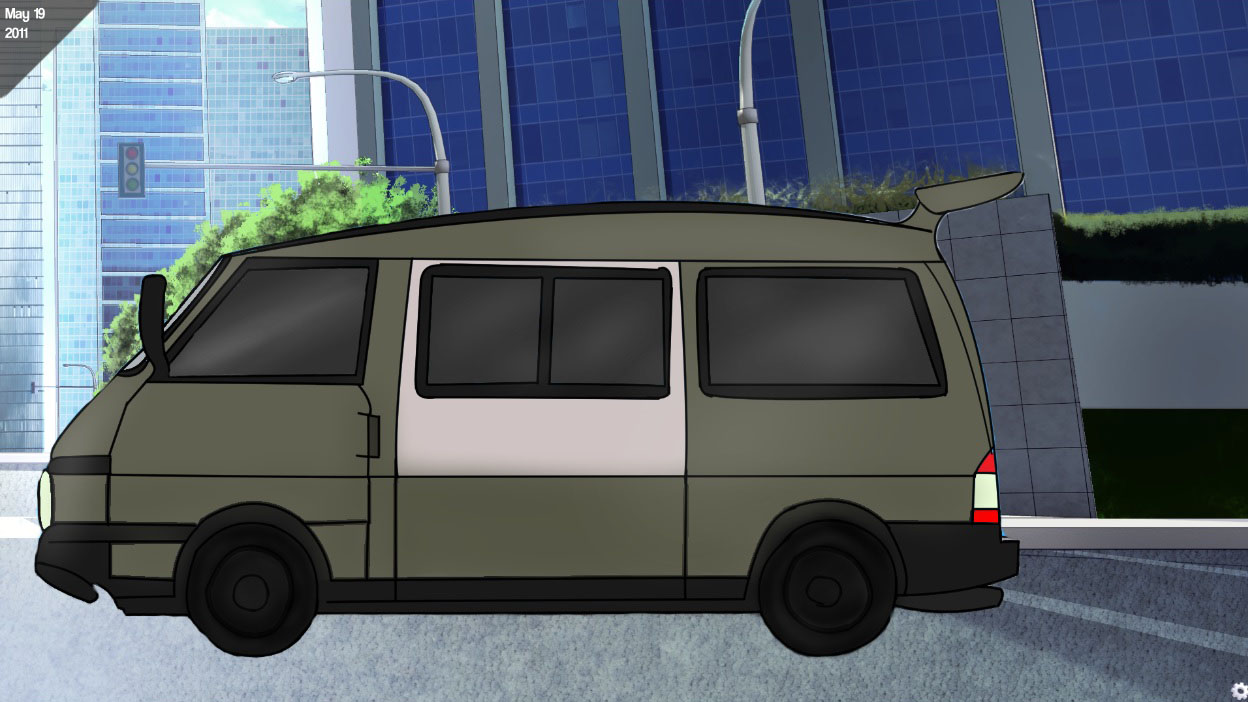 This is not an image you should put into your visual novel. Ever.

This would be the low point of the artwork in Impulse! The focus is off, as the vehicle is off-center, leaving dead space off to the right. The building in the right side background appears to be leaning more than that tower in Italy. Oh… and the van is TERRIBLE. I’m not saying I can do better – I’m saying you, NWG, can do better. I can forgive the scenes in Laura’s apartment where she inexplicably changes clothes between sprite and CG, as well as the fact that I can’t determine where all the light in her apartment is coming from. I can forgive Joe looking like a Pokemon trainer at times, because the art isn’t bad, it’s just a tad off. But this? C’mon, man. Buy a piece off of Shutterstock or something, but don’t put this in there. The good news is that this is the lone low point in the artwork, and the good does outweigh the bad, which makes this elephant stand out all that much more. 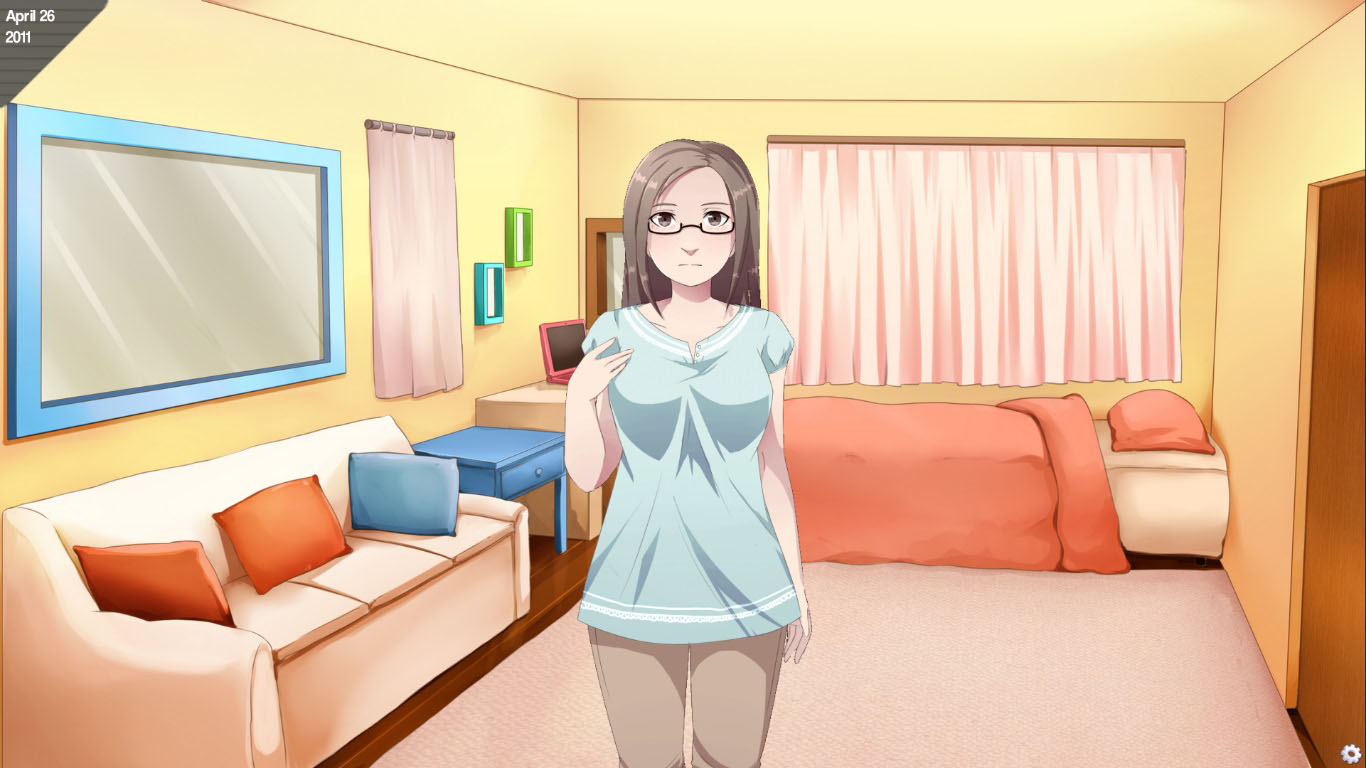 Laura shines with such inner light, which is good since I don’t see any lamps here.

What is a tad disappointing is the simplicity of the novel’s workings. For having ambitious goals of adding different game elements and full vocals, the basics of the novel leave a bit to be desired. There’s no CG gallery, which is really a staple of the visual novel format. Also absent is a track list, which kind of stands out when your visual novel is about a rock band. The game also lacks basic functional controls, such as text speed, autoplay, and turning the voices on or off mid-game – you choose whether to have vocals at the beginning and you either live without or soldier on with them. These are definitely things that should be polished up, as these are merely the basics expected of a visual novel. So the final part – was I entertained by the novel? The story is nicely paced, and reads at about 3 hours or so, and has alternate routes, mostly pertaining to which band member you want to try and hook up with – lead singer Laura or bass guitarist Li… just Li. The weaker elements come from the scene clicking parts, as well as some of the stuff that comes at you from left field. But, yes, I was entertained.

There’s some good storytelling talent in this visual novel, and being only a second offering, it gives Browner something to improve upon for future works (which, if he’s serious on his Twitter, will be about girls volleyball). Impulse!, taken by its own merits, is a decent if uneven visual novel. If this were by a long-established company I’d either be writing about how it’s what I expect or how it’s better or disappointing. The key element here is that this is a very new developer, so my main question is this: “Reading through this offering, would I want to read something else by this developer?” My answer is yes – what I see are a lot of positives to build on and some flaws that can be corrected with practice or getting a partner or two to help out. I usually hate the word potential, because it gets thrown out as an adjective way too much, but there it is. There’s a lot of potential at NWG, and it does show in Impulse! It’s worth adding to your library and giving a shot.

You can purchase Impulse! here.

Review key provided by the developer.

+ Music is pleasant to listen to.

+ The story is well-paced and is a fun read on the whole.

- Inconsistency in some of the artwork.

- Lack of some of the basics included in visual novels, i.e. text controls, track list, etc.

- What you did to poor Joe is wrong and you know it.