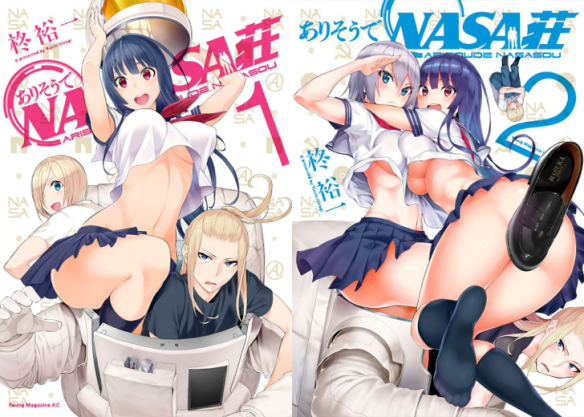 Every once in a while when the moon turns blood red, the stars align and the wolves howl in the night, I do something unlike me and read something dumb and light-hearted. Because even a gourmet eater craves a big, juicy, disgusting hamburger from time to time, right? Right. IN ANY EVENT. I picked up this manga on a whim because the art looked great and the premise sounded wtf enough to pique my curiosity. And… maybe the cover art influenced me too… just a bit… yeah… Anyway, so putting that aside, let’s talk about this dumb, light-hearted, but semi-entertaining manga about a bunch of weirdos doing weird things.

Arisou de NASA Sou introduces itself as a heart-warming “space comedy” with just a bit of ecchi thrown into the mix for good measure, but based on what I read so far, it doesn’t have much to do with space or actual astronaut things, nor is it what I’d call a purely ecchi-focused manga, as the ~lewd~ stuff isn’t horribly over-done, despite what the cover art might make you think. Which actually works in its favor, as it strikes just the right balance.

Ok, so get this. The basic