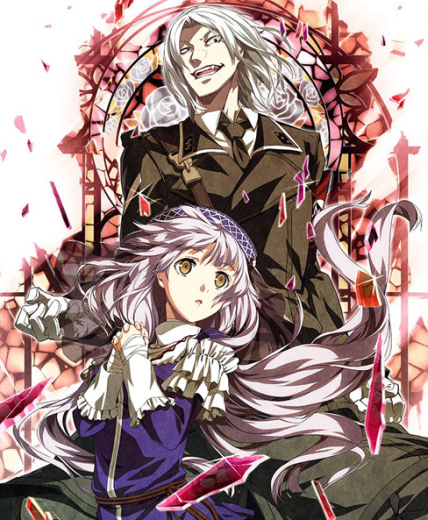 Dies irae is back, and in a way I never would have predicted: with a prequel / side story / fandisc-like thing focusing on Wilhelm Ehrenburg (aka Kaziklu Bey) during the early days of the Longinus Dreizehn Orden. He meets a mysterious young lady by the name of Claudia Jerusalem (voiced by Noto Mamiko), and the two get entangled in… well, all sorts of things. You might be wondering why Wilhelm, of all people, would be starring in a “love” story, and how Claudia even comes into the picture, but in the end… I thought things worked out in a way that satisfied the Dies fan in me.

IkaBey (for that is the squid-tastic shortened version of the title) begins its story in New York, a short while before Wilhelm travels to Japan and partakes in the events of the main game. He’s approached by a female reporter by the name of Dinah Malloy (no doubt inspired by interviewer Daniel Molloy from Anne Rice’s Interview with the Vampire), eager to know the dreaded Kaziklu Bey’s life story. So she whips out a recording device, and he starts talking.

The VN is indeed framed (and occasionally…