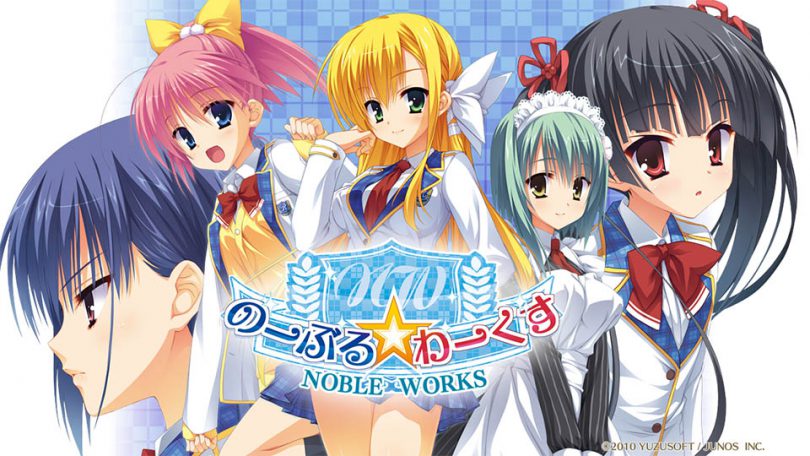 Depending on who you ask, there’s supposedly at least one person out there who looks pretty much exactly like you. In theory it’s probable, considering the billions of people on the planet and the gene pool all clouded up with various DNA from Alabama to Zimbabwe. But you figure you’ll never run into them – he’s probably out in Norway or New Zealand, right? Yuzusoft decided against that notion, and went with sticking its main character next to his double in the 2010 visual novel Noble☆ Works which was recently translated by the fan group The Oxford Comma is Superior Subs (as opposed to the AP No-Comma Use Group). 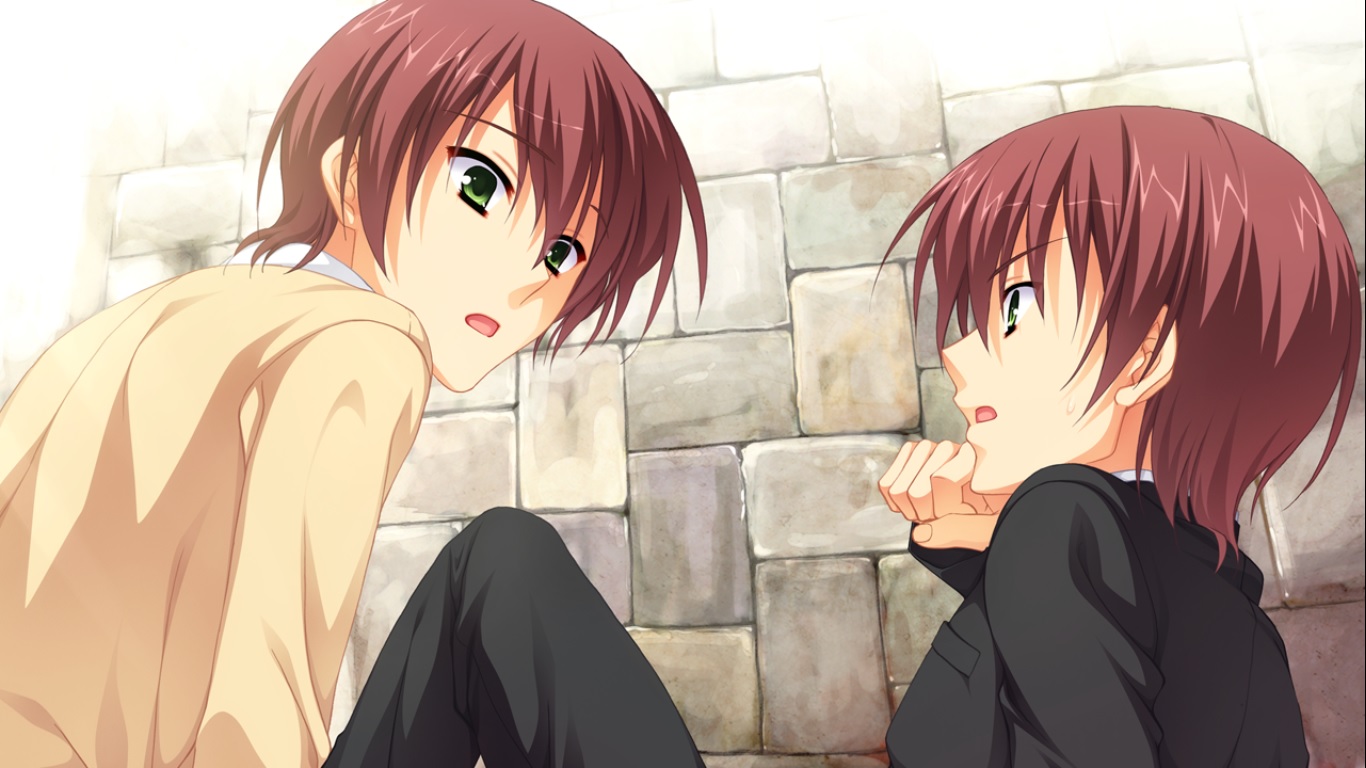 Who are you? I’m you… only richer!

Fujishima Takumi, our protagonist in question, has it pretty rough. He lives away from his family. He works odd jobs just to stay afloat. And he has no girlfriend. And just when you think it can’t get any worse, his current job falls through and his cute pink-haired girl kouhai is leaving for another school. In other words, all the typical makings of a “life sucks but it’s going to get better” protagonist. Walking home, Takumi literally runs into his doppelganger, Kanemoto Shuri, who’s busy escaping from people who have nothing but ill intent for him. Eventually Takumi helps the feeble Shuri escape and takes him back to his apartment. Turns out Shuri is the son of a wealthy and influential family in Japan, but he needs surgery and recovery time to get better. Soon enough Shuri’s older sister and the family maid barge in, and, upon seeing just how much Takumi looks like Shuri, they offer him an insane amount of money to be a body double, so Shuri can get his surgery done in secret, since the persons of ill intent are still at large. Naturally, Takumi accepts the deal. The poor guy can’t even buy cheap ramen at this point, so potentially getting beat up in relative comfort naturally seems better than starving on the streets. And really, all he has to do is go to a specialized school for wealthy trust fund kids and pretend to be a guy he’s only just met. What could go wrong? With that as the premise, Noble☆ Works pretty much goes forward as your standard eroge. If you’re looking for something groundbreaking or envelope-pushing, you won’t find it here. You have your hard-luck protagonist who happens to be good at many things because he’s worked at least 147 different part-time jobs. You have your garden-variety selection of females to pursue for h-scenes – the tsundere sister, your best friend kouhai, the socially awkward girl, the sheltered rich girl, and the overly-kind student maid. You have your typical hijinks that come with the eroge territory – the accidental viewing of sacred panties, the question of bust size and men’s preferences, where the guy hides his dirty books, etc. It’s standard fare eroge, but it’s good standard fare eroge.

That isn’t to say the story isn’t well-written or entertaining, because for the most part it is, it’s just that it’s not really all that original unless you’re new to slice-of-life eroges. If you’re pretty well-versed in this genre, you will likely get the feeling that you’ve read about these characters elsewhere under different names. For instance, Takumi reminds me a lot of Masaya from Princess Evangile though only because of the order of my reading, as Noble☆ Works was released first. What does set Noble☆ Works apart is the non-heroine route cast. While the protagonist and heroines are all pretty cookie cutter, there are three supporting characters that are amazing and practically steal the novel at times. Nagasone Kotetsu plays the part of Shuri’s friend, and goes back and forth from being a total idiot to being the sharpest tool in the shed. Sanjou Makoto is also a friend of Shuri’s and delivers plenty of perverted comedic relief during school scenes. And then there’s the amazing Minamoto Chiaki, the Kanemoto family maid. Chiaki, simply put, is the best girl of the story and earns her title of Deus Ex Machina… sorry, that’s First Class Maid. If a fan disc is ever made for this, Chiaki had better dominate the content. 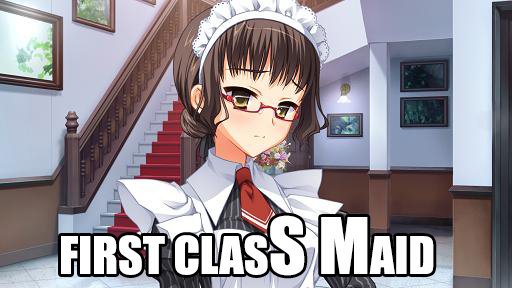 The capital letters are there for a reason.

In terms of art, the work is top-notch. Big eyes, small mouth anime-style that’s pleasant to look at. The background consists of 26 pieces of original art that alternate as the scene changes. The CG scenes are gorgeous and consistent with the overall art style (the character sprites look like the CG art, in other words). As it’s a professional work, you would expect high quality and it certainly delivers. There’s even a nifty sprite viewer in the extras where you can set a scene and character, something I hadn’t seen in a visual novel’s extras before. The music is specifically  made to be more class appropriate than age appropriate. A good bit of it is meant to evoke a feeling of high class, so expect a lot of violins and flute. It does change tempo depending on what’s going on in the background, which is nice. The opening and closing themes are vocal numbers from longtime industry singers Sakakibara Yui and Shimotsuki Haruka and are rather pleasant pieces I wouldn’t mind dropping on my mp3 player. The Oxford Comma Group did a really great job translating this game, the script reads correctly and I didn’t note any glaring errors or horrible cases of Engrish popping up. It’s so well-done, it hardly feels like a fan translation at all, and reads more like they did the original writing themselves. Considering this appears to be their first (and so far only) stab at translating a massive Japanese visual novel, I’d have to say they earned a solid A for this effort. With the time and effort it takes to translate a game like this, and that they don’t actually get paid, I can only hope words of encouragement spur them to take on another project. 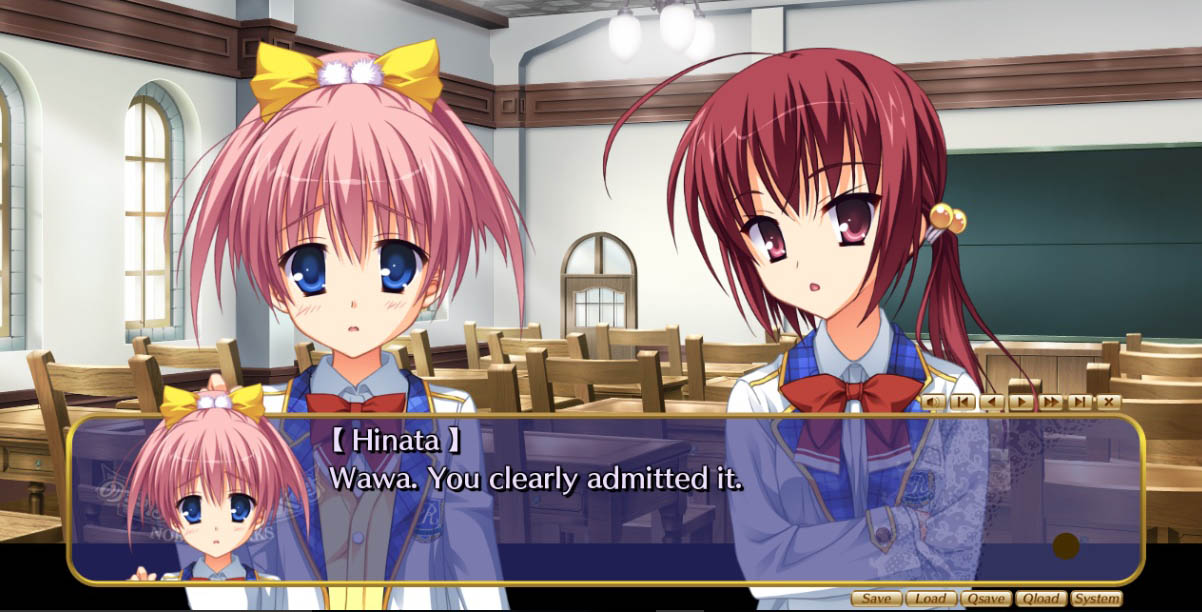 Girl on left can be best grill. Girl on right, sadly no.

Noble☆ Works is the type of visual novel you go to if you’re looking for what a standard eroge delivers – typical characters, setting, story, etc. There’s nothing wrong with that at all if it’s done well, and there’s no denying it was done well. However, the fact that it delivers only what you expect of a visual novel is the reason why it doesn’t really stand out, either. But sometimes, that’s really all you want out of a VN, less thinking, more hijinks, and Noble☆ Works delivers that in spades.

- Secondary characters are more memorable than the main characters